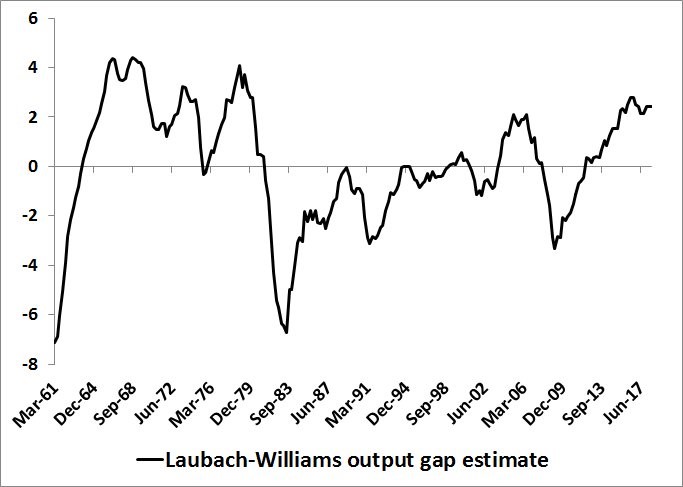 The simplest explanation as to why stocks are having a solid year in 2018 is because inflation has been tepid. Inflation is high enough to push real wage growth negative and come close to matching the cycle high, but it isn’t high enough to cause the Fed to hike rates quickly. The economy is in the 9th year of the expansion and Q2 GDP growth was 4.2%, yet year over year core PCE only matched the Fed’s 2% target. The economy is at the point where it should be exuding increased inflation, yet the Fed still has what it considers accommodative monetary policy.

It’s debatable where the neutral rate is and whether policy is near contractionary. What’s not debatable is inflation’s long term down trend, measured by CPI and PCE. It has fallen to the point where high inflation only barely meets the Fed’s goals. Inflation in Japan and Europe can’t even get that high. While that’s a good problem, their GDP growth is also low partially because of weak demographics. America is in the sweet spot were growth is strong, and inflation is modest. This great situation also had the combination of a cyclical upturn and tax cuts to boost stocks further in 2018.

The US stock market is led by its tech growth stocks. Monetary policy plays a role in this because growth names don’t like inflation. One of the biggest fears about the tax cut was that because the economy is near the end of the cycle, it would create excess inflation. Now that we see inflation isn’t a problem (yet), the biggest worry has switched to how long this period will last. You know the economy is good when both economists and investors agree and are wondering if it can continue.

Inflation Is Expected To Increase Modestly

The fact that investors are so confident inflation won’t increase makes stocks rally as investors hate uncertainty. As you can see, surveys show only 21% of investors believe core PCE will increase more than 0.25% in the next 12 months. Most investors expect between a 0% and a 0.25% increase in inflation. There hasn’t been a time since 2008 where inflation was high, and investors expected a further spike. This is a fertile ground for the longest bull market ever and the second greatest one.

While inflation is contained as it is only expected to increase modestly, the Fed is still expected to keep hiking rates. The 4th chart below shows the Fed hasn’t always hiked when inflation has gotten high.

The Fed has maintained its hike cycles until the markets and economic data have weakened. Even though the current inflation rate is manageable, the Fed may still hike rates until the economy weakens.

To be clear, the economic data section in the chart is nonfarm payrolls, industrial production, unemployment, and others. The inflation chart is core and headline CPI, PPI, and PCE. The markets are the S&P 500, U.S. treasuries, U.S. junk debt, the U.S. dollar, gold, and WTI oil. Only inflation data doesn’t have a near 100% probability that the Fed should be in a tightening cycle. This provides evidence of our point made earlier which is that the Fed will hike rates even without excessive inflation. Core inflation of about 2.2% in the next year shouldn’t be a problem, but the Fed could push the economy into a recession if the yield curve keeps flattening.

Even though the chart below shows stocks do better in expansionary monetary policy than contractionary policy, the results aren’t statistically significant enough to profit from.

It would be very easy to just buy stocks when rates are decreasing and sell when they are increasing, but it’s not that easy. The key to timing recessions is to figure out when the Fed is done with its hike cycle because recesssions usually follow. That’s not an easy task which is why it is profitable.

The Laubach-Williams estimate for trend growth and natural interest rates is measured using real GDP, inflation, and the Fed funds rate. Some investors don’t believe this output gap is accurate because inflation is low. You’d expect an economy running above its potential to generate excess inflation. Either the economy is very close to a recession or this calculation needs to be revised. It seems many models have predictions for inflation above reality.

As you can see from the Goldman Sachs chart below, the American output gap signals there’s little room left for growth in the economy.

Germany is operating alongside America even though its headline inflation is 2% and its Q2 GDP growth rate was just 0.5%. China’s economy is operating below its potential, but it is in a decline. The best examples of countries where potential isn’t always reached are Italy and Russia. Reforms need to be made or their economies will never reach their potential. The output gap is only an estimate and doesn’t tell us when cycles will turn and reforms will be made.

US inflation is low so stocks are doing well. The modest expectations for inflation are also helping stocks. Even though the output gap says America is growing above its potential, the economy isn’t generating excess inflation. The only problem is the Fed is hiking rates even though inflation isn’t above its target. If the Fed keeps hiking, it can cause a recession even while inflation isn’t expected to get much higher than its 2% target. To be clear, contractionary policy doesn’t mean to sell stocks. You need to figure out when the Fed will stop hiking rates. It will stop when the economy weakens, not when inflation moderates.