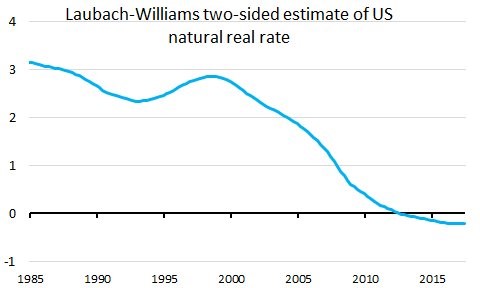 Determining if the current Fed funds rate is too restrictive or expansionary is a critical endeavor because it helps explain what part of the economic cycle we are in. As we have discussed previously, there are many different ways to attempt to time the business cycle in an effort to determine how close the economy is to a potential and inevitable recession. One method that we discussed is the output gap, while another is the yield curve. The best method is to use multiple indicators instead of relying on just one because economics is not an exact science. In general, when the unemployment rate is falling and inflation is increasing, rates are too low. When the unemployment rate is rising and inflation is falling, the Fed funds rate is too high. We can already see the difficulty with our current situation without even bringing in more variables. Inflation has been below the 2% target while the unemployment rate has been above expectations. This is a great combination for stocks and the economy, but it makes it difficult to determine the direction of monetary policy. Fed officials and economists in general fear what will come next. If economic weakness is around the corner, leaving rates stable is practical from their perspective. If inflation is headed higher, raising rates becomes necessary. The best policy anticipates economic changes, but sadly the Federal Reserve has a poor track record forecasting and is instead more reactionary in practice. This is to say that by the time its too late, the Federal Reserve responds.

What Is The Natural Interest Rate?

Investors want to figure out what policy should be to see where stocks will go. If the fed funds rate policy is too restrictive, investors may want to sell risky assets. If policy is just right or too expansionary, this increases the demand for risk assets. One concept of interest rates that may be beneficial in determining where we are in the business cycle is called the natural interest rate. This is defined by Wicksell as

“a certain rate of interest on loans which is neutral in respect to commodity prices, and tends neither to raise nor to lower them.”

This is a rate the Fed can utilize to determine where the Fed funds rate should be so it doesn’t cause inflation or a recession. We asked FinTwit (Finance Twitter) for their thoughts on the natural interest rate and whether it had any merit. “GreekFire23” responded, “NAIRU exists in theory only, like the Phillips Curve. When the bond market inverts the curve on them they’ll know the natural rate then.”

This statement has a lot of information in it to unpack. Firstly, the Phillips Curve is the relationship between inflation and unemployment. When the unemployment rate falls below the long run rate, inflation is supposed to go up and vice versa. As we’ve discussed previously, this hasn’t been happening, making the concept look like a theory that doesn’t always work in real life. Secondly, NAIRU is the non-accelerating inflation rate of unemployment. That’s the long run Phillips Curve. It is the rate of unemployment that doesn’t cause inflation. Finally, he mentions the bond market inverting which is a reference to the yield curve. When long run rates are lower than short run rates, it’s an inversion which signals an impending recession. As we have reviewed previously, while it demonstrates that a recession is near, it fails to give us any greater insight into the timing of the recession.

As you can tell there are skeptics that don’t believe the concept of the natural interest rate is realistic, instead relying on the bond market to provide details on where the economy is headed. If the Fed funds rate was controlled by the free market, it would follow the bond market without any disconnect, but instead the Federal Reserve controls it, meaning there are human intricacies worth discussing. We can’t just look at the free market for short-term signals because the bond market is affected by the Federal Reserve through changes in the short term interest rate and QE. To clarify, what we are stating, to take the words of Benjamin Graham:

“In the short run, the market is a voting machine but in the long run, it is a weighing machine.”

One of the other rates besides the natural rate which is commonly used to determine where Fed policy is in relation to where it should be is the Taylor Rule. The Taylor Rule is very similar to the natural rate because both have formulas to determine them, meaning they are up to interpretation and bias. The goal isn’t to curve fit in an effort to put numbers into the formula which get us the result we desire. This often happens with biased investors who are conducting valuation analysis. This is why the great value investor Warren Buffett likes to avoid looking at what the company is trading at when evaluating it to help him avoid bias.

If you want to get into definitions, the natural interest rate is used in the Taylor Rule formula. As we mentioned, the Taylor Rule isn’t fixed. The Taylor Rule rate on the Atlanta Fed website is 3.32% if you just leave the parameters they have on default. However, some analysis differs from this. The chart below shows a different estimate of the Taylor Rule. 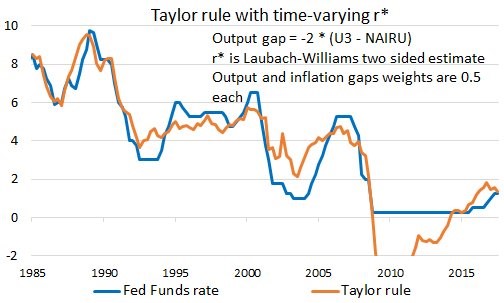 Estimate Of Taylor Rule Using An R* Of 0

In this iteration of the Taylor Rule, the formula uses an r* of close to 0. R* is the real short term interest rate when the economy is in equilibrium. This estimate is based on the Laubach-Williams two sided estimate. Using these numbers shown above gets you a Fed funds rate near where we are now. The Fed funds rate was above this version of the Taylor Rule during the last recession, but quantitative easing made the shadow rate lower. The point is that the Fed fund rate is near where it should be, based on this measure at least. If the Fed starts hiking too quickly in 2018, it could push economic growth lower.

The Laubach-Williams natural interest rate shown below is one attempt at what the natural rate is. This is what was used in the Taylor Rule estimate above to get an idea of where the Fed funds rate should be. The r* has fallen in the past few years because of demographics, labor productivity growth, and the investment to savings balance. While this rate might not be the perfect solution to what the natural rate is, it’s better to do an analysis to model what the rate is instead of picking 2% just because that’s what it has been in the past. Economic trends change, so the natural rate changes. An aging population pushes rates lower.

This was a discussion on natural rates and what that means for the Fed funds rate. If you listen to the Laubach-Williams natural rate or the yield curve, you actually get a similar assessment of the economy. The Laubach-Williams rate implies that if the Fed raises rates a bit more, it will be too tight which can lead to a recession in a couple years. The yield curve, when measuring the 10 year treasury minus the 2 year treasury, draws the same conclusion as the calculation for the natural interest rate.

If the Fed raises rates a bit more, it can invert the curve and push the economy into a recession within a couple years.