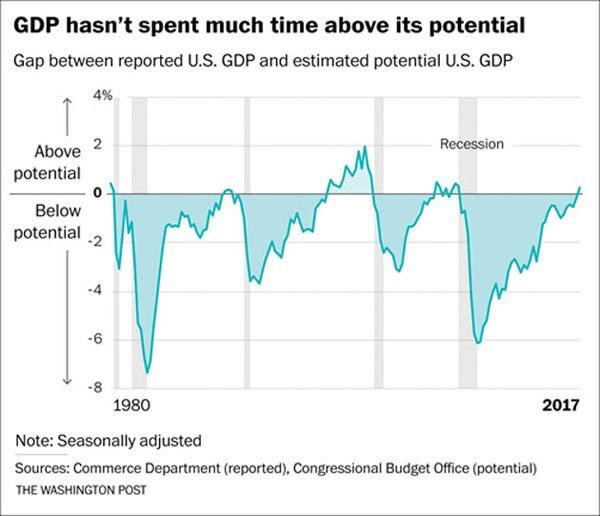 The output gap is the difference between actual and potential economic output and is used by economists to understand the health of the economy.

There will never be a metric which tells us how the economy will perform with absolute certainty. Not only is it difficult to predict the future, it’s even more difficult to know where the economy is in the present. The yield curve is one of the metrics we use to let us know where we are in the business cycle. Knowing what part of the cycle we’re in helps with investment weighting decisions. Timing the changes in the cycle takes a lot of research and the ability to utilize experiences learned from previous cycles.

You’re probably wondering where the economy is at. The chart below shows the economy’s historical output compared to its potential.

The Commerce Department gives us the information on the actual state of the economy and the Congressional Budget Office give us information on the economy’s potential output. The current output has recently moved to being above its potential. This provides another supporting factor for the thesis that inflation will increase in 2018 which we explored in a previous article.

The output gap for the OECD nations looks similar to the measurement for the U.S. The GDP is expected to be growing above the potential rate in 2018. 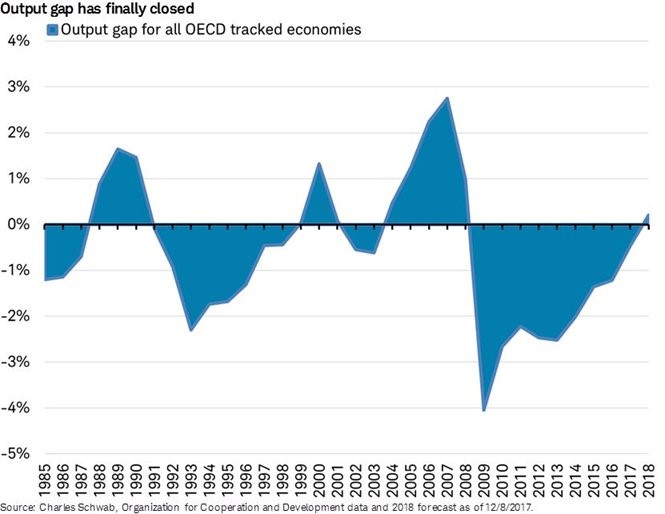 OECD Economies Expected To Be Above Capacity In 2018

On average, in the past 3 cycles, it takes the OECD nations about 3.33 years to go from operating above capacity to operating below capacity. This implies the global economy will be in a recession in about 3.33 years. Because the 2008 financial crisis resulted in such a prolonged recession, the global and domestic economies have taken awhile to get above capacity. It’s notable that the domestic output was barely above capacity in 2007, while the OECD output was almost 3% above capacity. The European Union, Germany, and Latin American & the Caribbean were operating far above capacity in 2007. Currently, the US has a slightly higher output relative to potential GDP compared to the OECD metric, implying the domestic output relative to potential will be higher than the OECD this cycle.

Economy’s Output Potential Is An Opinion

With the understanding that the economy’s output potential is an opinion, let’s look at one forecast for 2018. 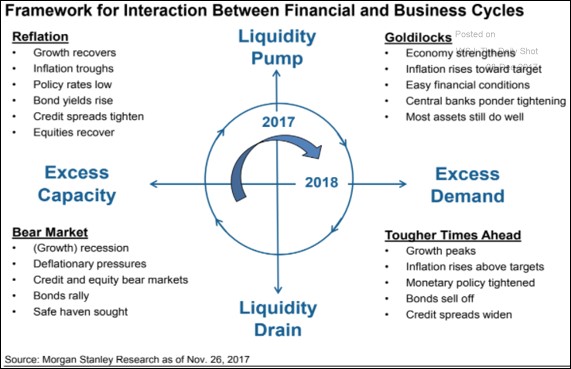 As you can see, Morgan Stanley expects demand to outstrip supply in the economy which is growing above potential. This will lead to a peak in economic growth, inflation, Fed rate hikes, and a bond selloff, with junk bonds hit the hardest. The next step is a recession.

Measuring Economics Can Be Challenging

Some find economics infuriating because of how uncertain every aspect of it is. This is why you might see some people complain economics is like astrology. Rest assured, economics has value. The fact that it is tough to master is what makes it beautiful and creates so much opportunity for those who are unbiased investors. The other aspect of economics which angers viewers is the politicization of key concepts. Ever since politicians saw the economy as an important issue for voters, they have made it a central feature of their campaigns. Because economics isn’t as straightforward as math, it’s the perfect place for politicians to misconstrue facts and opinion.

The fact that economics can be a heated topic is great news for investors because it means you can get ahead by taking an unbiased approach while other are squabbling about which candidate is the best for the economy and which one will ruin it. One non-biased outlook we can share is that the GOP tax cut is probably mistimed if you look at it like a stimulus. Stimulating the economy at the end of the business cycle leaves little dry powder for when the economy is in a recession. Realistically, the plan is temporary because some of the cuts fade away before the 10 year window ends. Since the Democrats oppose it, they will look to limit it as soon as they win an election. The fact that it adds over $1 trillion to the debt over the next 10 year is another aspect that makes it temporary. That being said, there will be beneficiaries of the plan in the near term which will provide profitable investing opportunities.