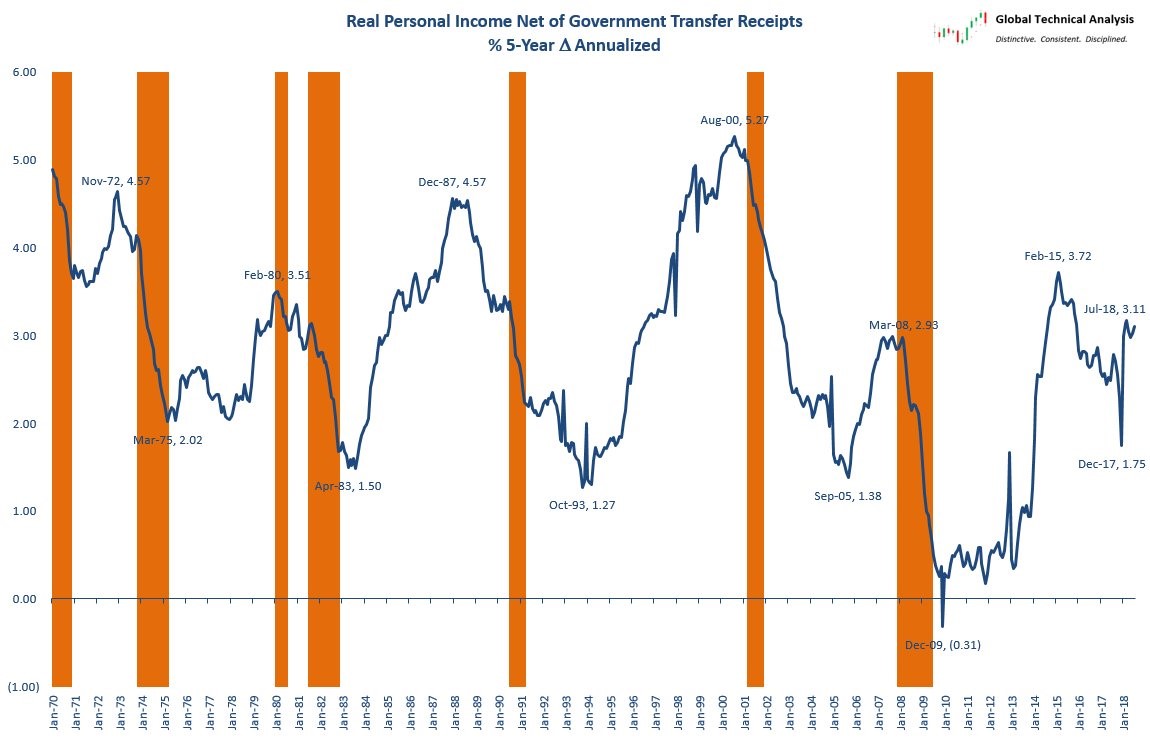 Q2 GDP growth was revised higher from 4.1% to 4.2% even though the estimate for real consumption growth was revised lower from 4% to 3.8%. That being said, the consumer had a strong rebound from Q1 and still drove GDP growth to an amazing result. The obvious question is whether this growth rate will continue. The first official data which tells us if the economy remained on the right track is the July Personal Income and Outlays report which gives us information on real income, real consumption, and inflation.

The results from this report were largely in line with estimates which is great news because personal income and consumption growth were steady while inflation remained low. This is an extension of the Goldilocks economy which has been in place since late 2016 which has allowed U.S. equities to rally higher. Month over month real disposable personal income growth was 0.3% which met estimates and was down 0.1% from June. On a year over year basis, growth fell about 7.5 basis points to 2.9%.

This growth rate in July was 3.11% which is one of the highest growth rates this cycle. This chart shows recessions usually occur when growth decelerates. The economy is nowhere near that as growth is accelerating.

Real consumer spending growth was 0.4% month over month which met estimates and was the same as last month. On a year over year basis, it was up from 2.7% growth to 2.8% growth. This is a continuation of the positive spending growth trend we have witnessed in the past few years. This goes along with the extremely positive results from the Conference Board survey which is a month ahead of this report. It appears Q3 GDP growth is on track for another strong growth rate.

Inflation is the most important metric to follow because the economy is near the end of the cycle which is when inflation tends to increase. The core PCE inflation measurement is the Fed’s favorite inflation stat. This is the metric which needs to hit the Fed’s 2% target. Headline PCE was up 0.1% month over month which missed estimates for 0.2% and was the same as June. Headline PCE inflation was up 2.3% year over year which met estimates and was 0.1% higher than last month.

The Fed’s 2% core PCE inflation target was met. Let’s review the factors which led to this result. As you can see from the chart below, housing services and core goods excluding pharmaceuticals both were above their contribution targets.

How Should We Measure Inflation?

That’s not a shocker because the positive difference between non-discretionary and discretionary inflation is driven by oil prices. PCE inflation is usually the lowest calculation of inflation, so there are a lot of stats which encourage the Fed to be more hawkish.

Real Rates About To Be Positive

Deflating by core PCE, the Fed is about to reach positive real rates for the first time since 2008 in September. The September rate hike is almost a guarantee as the futures market sees a 98.4% chance of a hike. This chart makes it look like the Fed is not even close to finishing its hike cycle since real rates were above 3% in the last cycle.

Real rates differ from the yield curve which is nearing an inversion. An inversion indicates the Fed is close to done with its hike cycle. We will see which indicator is right this cycle.

The Fed is presiding over a pristine economy with positive real income growth and real consumption growth. Inflation isn’t that strong when reviewing the 2 year stack. In response to this Goldilocks scenario, the Fed is raising rates at a quicker pace as there is a 72% chance of at least 4 rate hikes in 2018. The hike cycle is likely near its close even though real rates are only just about to go positive for the first time in this expansion. Given the weak GDP and inflation during this cycle, it wouldn’t be unusual for real rates to be reaching a high for this cycle.