Here’s Why Startups Are Dying In The US 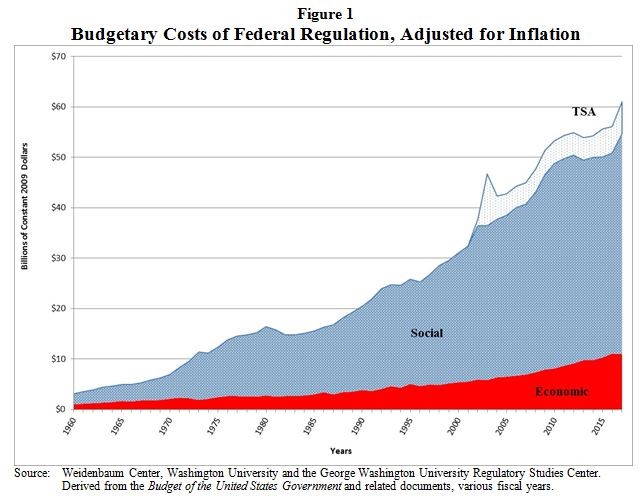 While recent small business surveys show small business confidence is high and many small businesses don’t list large competitors as a major threat, there has been a long-term trend of startups losing market share to mature firms, with large businesses improving their profit margins. This is an explanation for how large businesses in the S&P 500 can have record high profit margins while labor wage growth hasn’t reached prior cycle highs, productivity is weak, and GDP growth per capita is low. To be clear, another strong factor helping large businesses apart from the destruction of startup businesses is their success on the global stage. 30% of S&P 500 revenue comes from international sales as American companies look to the developing world for growth since the US is stagnant.

Starting from the beginning, millennials face a difficult task of merely reaching a positive net worth. Although there are great stories like Mark Zuckerberg at Facebook, it’s difficult to bootstrap a startup company when you have mounds of student loan debt. Keep in mind, we’re not even talking about young people who have just graduated. As you can see, the average person takes until age 30 to get a positive net worth. The psychologically taxing feeling of being in debt could further push people towards focusing on making a steady day-to-day living working for a large corporation instead of taking on more risk by starting a new company themselves. Some may make the counter argument that the internet makes it easier than ever to start a company, but the facts counter that claim as we will see later in the article.

Net Worth Of Millennials By Age

We have established that many young people don’t have the money to bootstrap the costs of a startup. Keep in mind, when you’re in debt you must work to pay it off, so you have less free time to start a venture. Now let’s look at the elephant in the room, regulations. The increase in the amount of regulations hurts startup creation. Startups struggle to make a profit in the beginning as they try to build a reputation. Any regulation which becomes a cost is potentially ‘a straw that could break the camel’s back.’

The chart below shows the budgetary costs of federal regulations. As you can see all regulation categories are moving higher. This is even though these numbers are adjusted for inflation. Obviously, if enforcement costs are up, so are the costs to startups. Many of these regulations have good intentions, but a cost benefit analysis is not done when they are put in place. Without this analysis, it’s impossible to see all the startups that weren’t created because of a new law.

Looking at some of the more recent data, as you can see from the chart below, the cumulative regulations under President Obama were much higher than under President Bush and President Clinton. These economically significant regulations are costs to startups which they cannot bear. 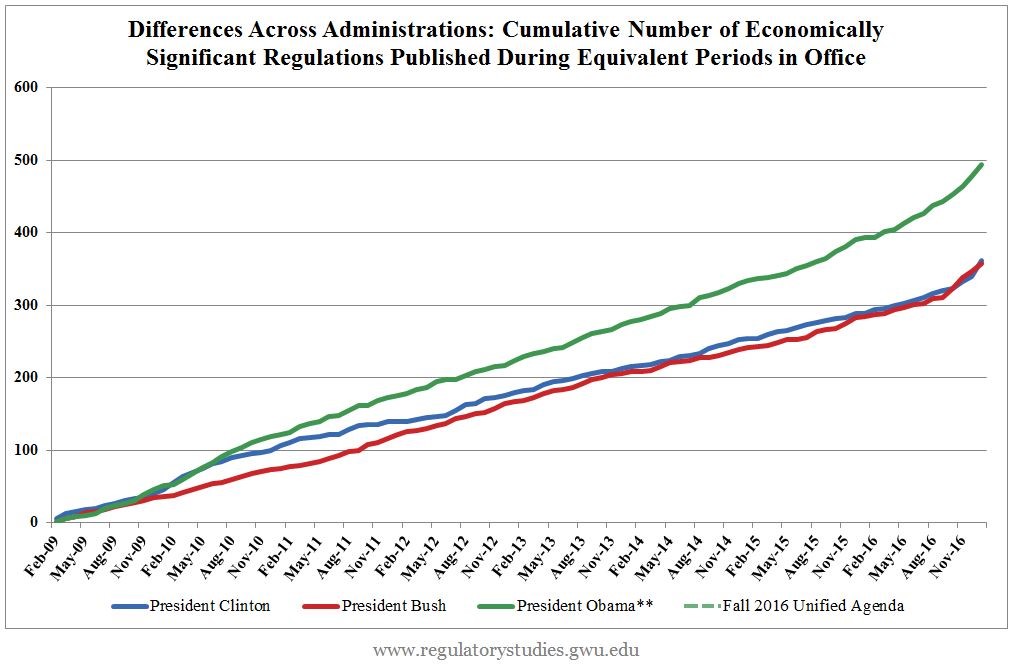 Economically Significant Regulations In The Past 3 Administrations

The chart below shows the demise of startups over the past few decades. Despite the popularity of unicorn startups like Uber and Airbnb, the percentage of firms which are startups has fallen since the 1979 when it was almost 14% until now where it hovers around 8%. 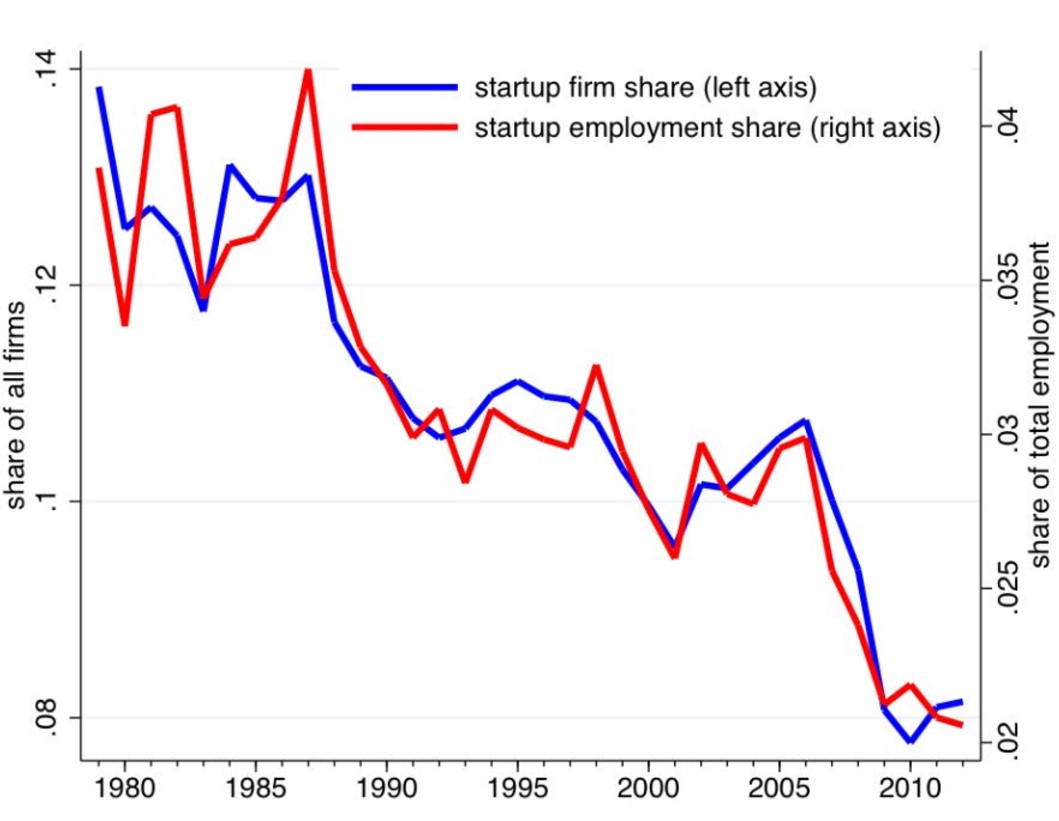 The share of employment has followed closely. The share appears to take sharp downturns around recessions. This is likely for two reasons. The first is obviously economic strife as demand shrinks and loans become harder to get especially for startups which are weaker than mature firms. The second part is that right after recessions the politicians increase regulations in a failed attempt to prevent the next crisis. The next crisis is virtually guaranteed to be anything but what the last one was. This makes regulations ineffective. An example would be increasing regulations surrounding mortgage lending after the 2008 recession. Right after a crisis is the most pointless time to make regulations because home buyers and banks were very cautious after they witnessed the crash. This logic doesn’t dawn on politicians as they churn out new rules which hurt startups.

The weakness in startups explains the economic situation the US is in. The chart below shows real output per hour of workers. 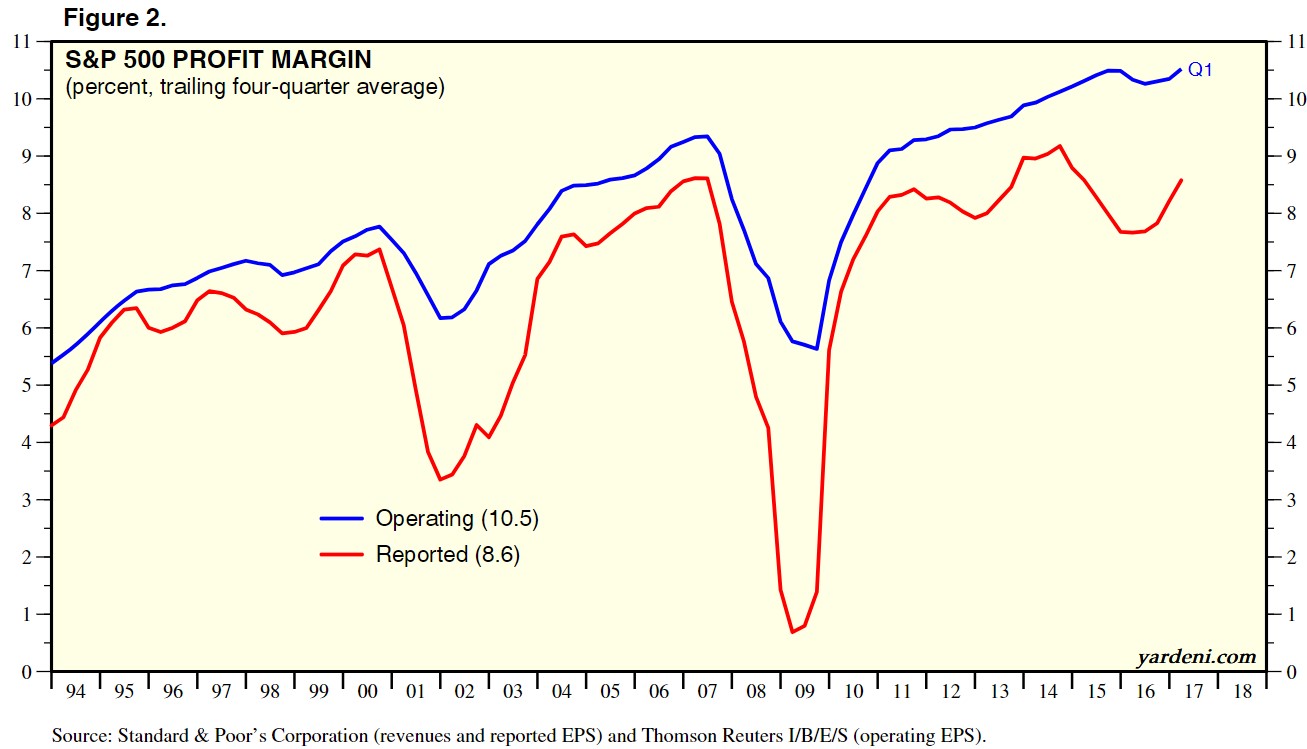 The largest corporations in America are reaching record profits on the backs of increasing margins.  Mature businesses have taken share from startups and US firms have ridden the wave of economic expansion in developing countries such as China and India. This cycle the leaders of the pack are the big tech names like Apple and Alphabet which have become super companies reaching large economies of scale, allowing them to have high margins. Margins are usually cyclical, but it’s worth noting the clear uptrend in the operating and reported margins seen in the chart above.

If America wants to improve productivity growth and foster startups again, it should cut regulations. That might happen as it was a campaign promise of President Trump. Unfortunately, in Trump’s budget some regulation spending was cut, but even more was added on. His exact budget won’t become law because that’s up to Congress so it remains to be seen what will occur on the regulatory front from 2017-2020. It’s not that Apple and Google dominating their industries is a bad thing. It’s that overall competition would increase if the US was a fertile environment for the creation of startups. Competition would improve living standards. The best case scenario would be if all types of companies thrived.