The American Dream Is Now Tiny 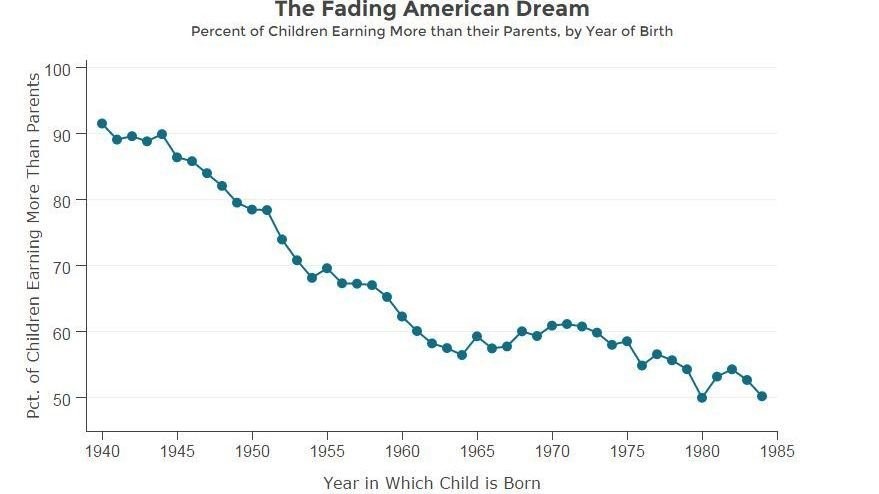 The experiment where policy makers tried to get as many people as possible to purchase a house because it was the “American dream” ended up being a nightmare. It artificially boosted the homeownership rate for a few years. The chart below shows the effects of the bubble popping as homeownership rate has fallen for several years even after the recession.

The image in the background of the chart is a McMansion which is an ostentatiously designed house style which gained popularity in the 2000s. These houses are huge and add many unnecessary, fake architectural designs.

Policymakers had a myopic view which was getting people in homes at all costs. It’s a simplistic measure of success which ignores the obvious premise which is “can these people afford the house?” Policymakers who believe the government is the solution to all economic problems decided to ignore the real solution which was improving wages; instead it used a band-aid approach by lowering interest rates and encouraging lenders to lower their standards. There’s a reason lending standards exist; they exist to prevent defaults. We saw a microscopic example of this in the past few years as Signet Jewelers lowered its lending standards to sell more jewelry. It ended up hurting the firm in the end as defaults piled up.

Policymakers can’t stand the idea that if consumers earn more money, they can make the best choices for themselves without the government pushing them in a certain direction. This is the same case with student lending as the government believes young adults aren’t smart enough to make the decision of whether to go to college or work after graduating high school. The unintended consequences of these bad polices spike after they have been in place for years making it less obvious how significant these mistakes are.

The nasty side effect is that honest people who are responsible got hurt because housing prices went up in the 2000s to extremely high levels making housing less affordable, ironically. College tuition is now more expensive than ever, rising much faster than inflation. Giving out loans to students only works to a certain extent as the minimum payments on loans have gotten so high, they can’t be paid by many graduates. The concept of student loan forgiveness only makes it worse because it allows colleges to raise tuition further with no remorse.

The obvious follow up question to the realization that the homeownership rate is down is to ask where these people live now. Most have moved to apartments. However, there’s also a huge trend towards people moving into RVs which are much cheaper than houses. As you can see from the chart below, RV sales have exploded in the past 3 years.

The dotted line is a 6-month moving average to smooth out the seasonality associated with buying RVs. The moving average is also in an uptrend. According to the North American Camping Survey, millennials are 38% of campers, while only making up 31% of the general population. These millennials with student loan debts are moving out from their parents’ house and into an RV. Thor industries, an RV company has seen its stock appreciate 240% in the past 5 years.

To give you an idea of the cost differences, the average house costs $379,500 and the median price is $310,800. Luxurious camper motor homes cost between $90,000-$125,000. This shift in millennials’ buying habits is occurring because they have different values than previous generations and because, in many cases, they can’t afford to buy a house. Material possessions aren’t as important to the younger generations as they appreciate experiences since much of their life is spent in the digital world. There’s no need for a giant TV as they have their smartphones. Also, many millennials are shirking having kids and instead buying a pet. Dogs don’t have to go to college. Education is increasingly becoming a cost which prevents couples from having more kids. Having less kids means living arrangements can be more economical.

In the 2000s HGTV transformed from a channel which helped viewers find cheaper ways to improve their house into a channel where prospective home buyers analyzed their options. There were even reality TV shows about real estate agents as the job went from boring to sexy over a few years because of the housing bubble. The latest trend on HGTV is tiny houses. The chart below shows the Google trend search history for the term “tiny house.” As you can see from the chart, this trend started in 2014. The image behind the chart is a tiny house. It’s the ultimate reversal of the McMansion as it utilizes its space efficiently and isn’t showy. Millennials have moved their ostentatious cravings to Instagram where they try to impress their friends by making their lives look more exciting than they are. These tiny houses are a throwback to colonial times where houses were much smaller than the houses of today. Older generations look down on tiny houses and renting, but millennials don’t use the size of their house as a measurement of their success.

Tiny Houses Are Growing In Popularity On Google

Just because the amount of mortgage debt taken out is below the previous peak doesn’t mean Americans have become thriftier. They’re leveraging themselves on different items. Credit card debt, auto loan debt, and student loans are at a record high. That has led to the chart below which shows that the household consumer credit divided by disposable personal income is at a new record high. This debt is arguably worse than housing debt. At least mortgages are based on land and a house which represent collateral which usually generally throughout history have sustained in value. A student loan has no collateral backing it and cars lose value the moment they are driven out of the lot. 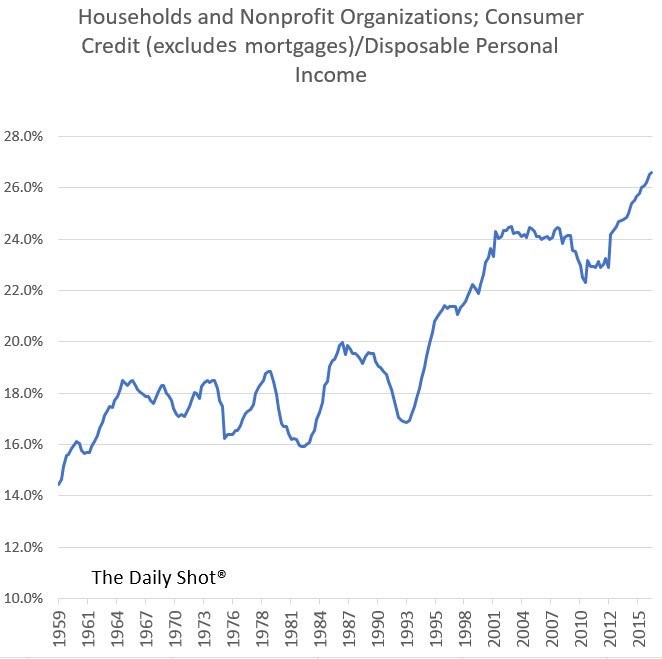 The American dream is now tiny as millennials are drowning in student loan debt. The chart below shows that a smaller percentage of Americans than ever before will earn more than their parents. Once the percentage falls below 50%, the next generation will have less money than the previous one. Policy makers have made things worse by creating asset bubbles instead of getting rid of regulations to allow businesses to thrive. The best way for America to be prosperous is to allow the free market to work. It’s what gave America such success in previous generations.