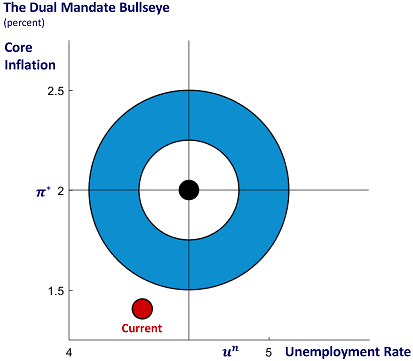 The Federal Reserve has a dual mandate to form an economic environment which keeps prices stable and has maximum stable employment. The Dual Mandate Bullseye chart does a great job of showing the policy objective the Fed has. As you can see, the x axis has an unemployment gauge and the y axis has a core inflation gauge.

The bullseye is to have 2% core inflation and 4.7% unemployment. Red dot is shown as of October 3rd, 2017. When the red dot is in the upper left corner where inflation is high and unemployment is low, the Fed should hike rates. That economy would be associated with a growing economy which is getting overheated. When the red dot is in the bottom right where inflation is low and unemployment is high, the Fed should cut rates. That economy is associated with a recession. The other two corners are more complex.

Having a low unemployment rate and a low inflation rate appears to be the perfect economic situation, but when unemployment gets too low it can cause wage inflation. Wage inflation is the ultimate balancing act the Fed must weigh because it wants workers to get raises, but too much wage inflation causes prices to increase and hurts corporate profits. When corporate profits are hurt, layoffs arise. The most complex part of wage inflation is that different industries have different supply and demand dynamics for their workforces. It’s rational to argue that the Federal Reserve shouldn’t set interest rates because a free market would be able to take in these factors and weigh them better, but since there is a Federal Reserve it’s necessary to understand how it interprets the economy and makes decisions.

The Advisor Perspectives chart below shows the year over year change in PCE since 2000. The personal consumption expenditures index is one gauge of inflation. Despite an uptick in Spring on 2017, both core and headline inflation continue to decline. 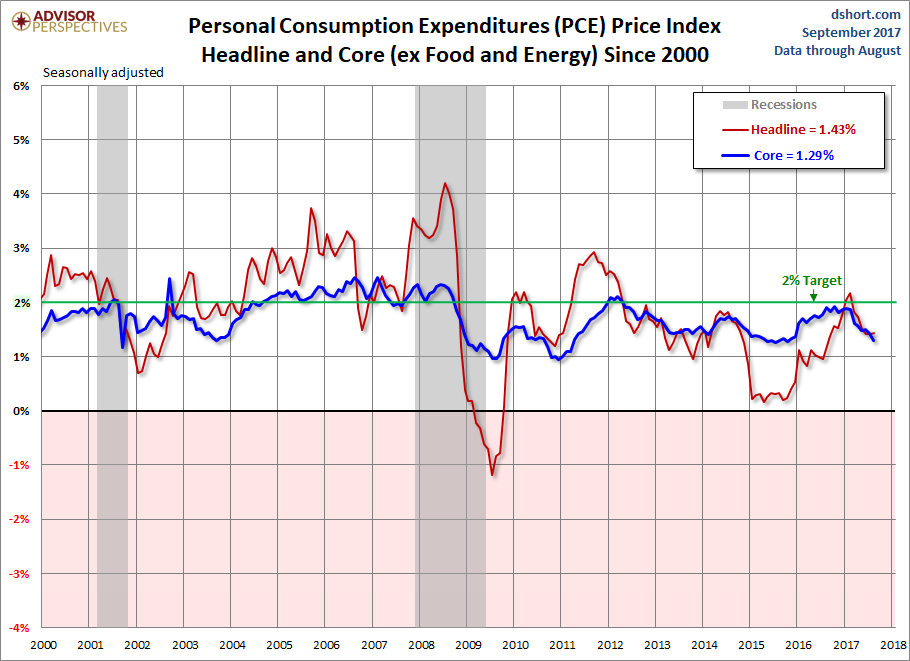 The Fed sees inflation waning, but is worried about it picking up again because the labor market is tight. While the Fed wants working people to get a raise, eventually those raises cause inflation in goods and services. Measuring the wages is another challenge the Fed has. Hourly earnings growth is stagnant as it has only been growing at 2.5%. This is below the over 3% growth rate traditionally seen in tight labor markets, but the hourly earnings growth report from the BLS has some distortions which many news outlets fail to cover. The hourly wage growth is an average so it is affected by the top earners disproportionately.

The Atlanta Fed’s tracker is superior to the BLS average hourly earnings growth because it takes out the higher earnings workers and uses a median. The median is far superior to the mean in calculations which have very high or very low data points. The chart below is the Atlanta Fed’s 3-month smoothed wage tracker. Smoothing is simply a 3-month average. Finally, the Atlanta Fed model uses a micro sample of workers; it matches data points on wages to avoid sampling errors. 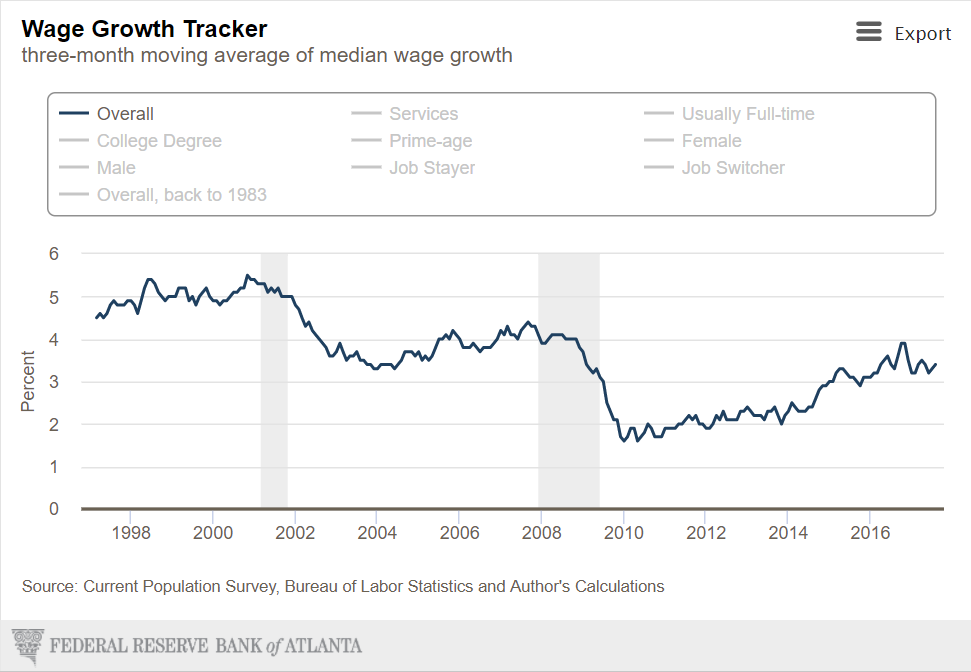 Wage growth is above 3% which looks better than the number put out by the BLS. However, the chart still shows a downward trend in wage growth since 2016 which may make some observers question why the Fed is raising rates somewhat aggressively in 2017. There have been other periods where the Fed has raised rates quicker, but in this cycle, the Fed has delayed rate hikes as much as possible, so 3 hikes in a year is relatively quick. The Fed is hiking rates with slower wage growth because of the slowing productivity growth. Slowing productivity growth means that firms can’t afford to raise wages that much. If workers aren’t becoming more efficient, employers can’t raise wages like they did in past decades when efficiency was growing quicker. Growing productivity is a problem the Fed wants to solve, but it must make decisions based on the fact that productivity growth is slow now.

Productivity growth is the best way to get wages to grow without being in the bind where the Fed is choosing between allowing wages to rise or fighting inflation. Productivity is down because firms aren’t investing in capital expenditures. Instead they’re buying back stocks. This trend is being helped by low interest rates as firms can borrow money cheaply to buy back stock. It’s not easy for the Fed to raise rates to combat that issue because inflation is low. The best summary of monetary policy is that every decision has numerous effects which are countervailing. Taking everything into consideration, the Fed is raising rates because wages are rising enough to handle the rate hikes.

Another metric the Fed is likely reviewing is in the chart below. The amount of taxes withheld is up 7.4% from last year. The tax withholdings combine the number of new jobs created with the total hours worked and hourly earnings growth. The acceleration in the amount of tax withholdings from 2016’s growth is a positive sign which gives the Fed cover to raise rates. 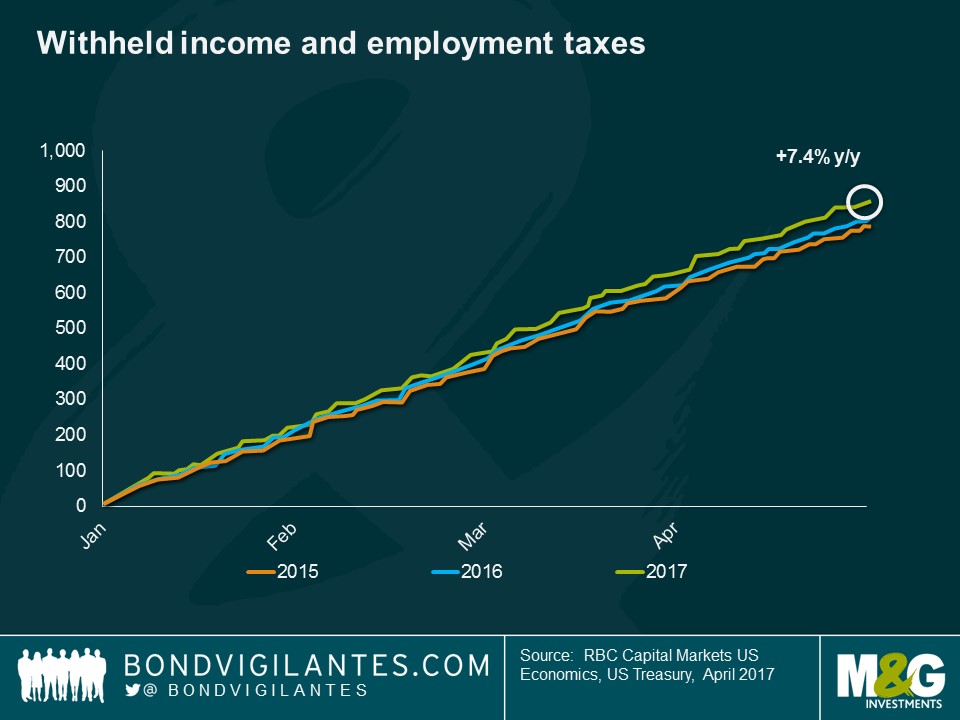 One other aspect not mentioned in this article is that the Fed is itching to raise rates to avoid having no room to cut them in the next recession. The key to understanding Fed policy is to first figure out where in the bullseye chart the economy is. The research is more detailed when the red dot is in the bottom left or the top right. It takes looking at the numbers in various ways to get the most unbiased facts. A final point worth noting is that unemployment and inflation are volatile metrics. The Fed seems to be trying to end the business cycle, but the debt cycle remains in place which means the Fed will rarely get the dot to be exactly on the bullseye.