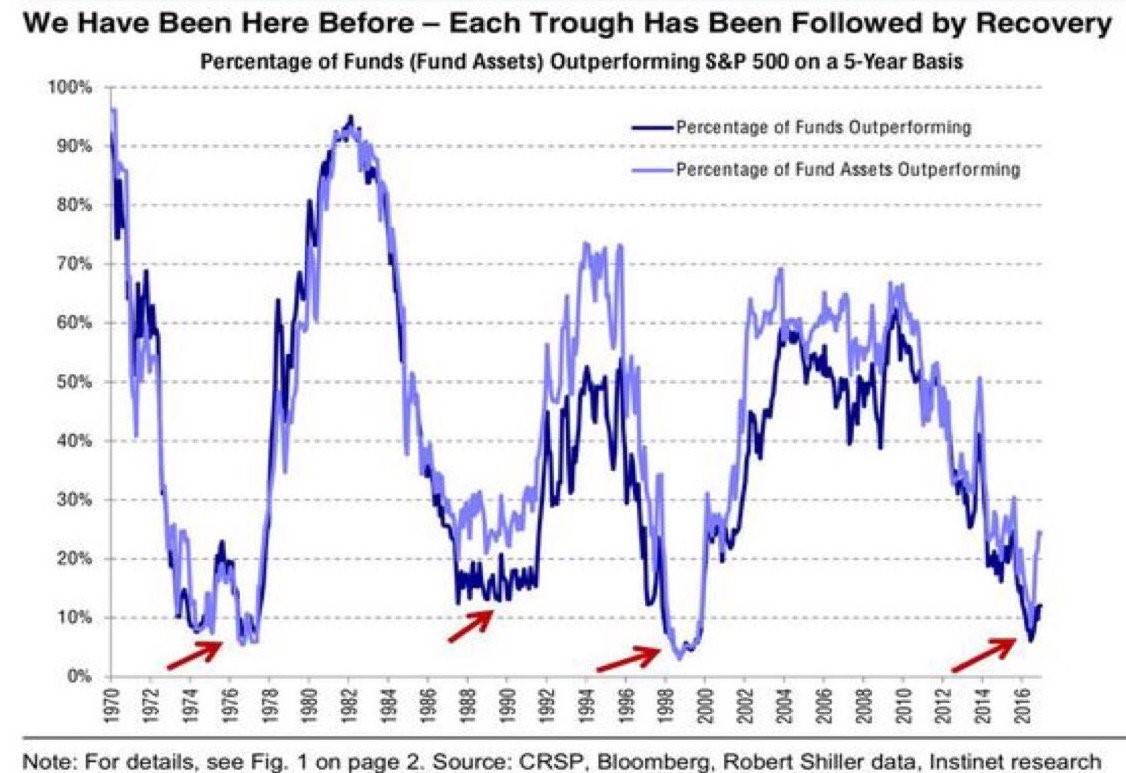 In a previous article, we discussed the problems with investing in index funds. One of the most important points made in that article was that indexes ignore firms with negative earnings when calculating price to earnings (P/E) multiples. When you buy an index fund, you buy all the stocks. Ignoring the firms with negative earnings ignores the fundamental problem with index fund investing, namely you don’t get to pick the best firms. An alternative would be for you to make your own decision, without investing in an index, thereby allowing you to exclude firms that lose money. It’s silly to think that the only way you can do well is to buy everything. You shouldn’t over-trade stocks, but this strategy of doing no due diligence is taking that advice to the extreme.

The chart created by INTL FCStone shows the Russell 2000’s price to earnings ratio excluding firms with negative earnings compared to the P/E which includes firms losing money and looks at the earnings on a GAAP accounting basis, which is the official accounting method. 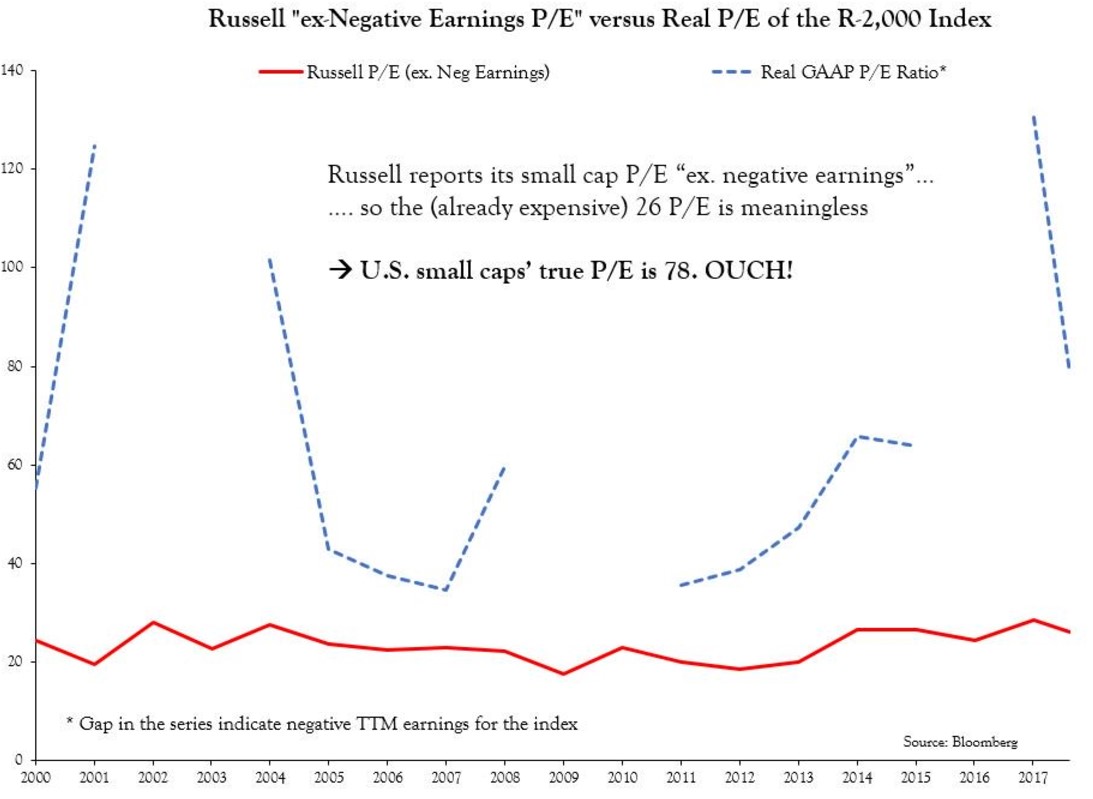 You may think it’s obvious to use GAAP earnings, but some investors think a one size fits all approach to accounting isn’t great so they use non-GAAP. A one size fits all approach isn’t perfect, but the problem with allowing firms to use what works for them is they can be aggressive, overestimating earnings results and focusing on opaque metrics that highlight how great the company is without revealing weaknesses. From 2001-2004, from 2008-2011, and 2015-2016, the real P/E didn’t exist because there was no earnings. Not many investors would buy the Russell 2000 small cap index if they realized many years the entire index had no earnings. The current real Russell 2000 P/E is 78 which is more than double the reported P/E.

This information isn’t well known to many passive investors. It’s worth doing your due diligence before blindly following the index fund trend. We discussed the possibility of excluding the firms that lose money when you buy the index. You could easily use a stock screener to avoid the money losers. The chart using Bloomberg data shows there’s typically about 30% of companies losing money, with the number of firms losing money increasing during recessions.

Money losing firms that make improvements and start making money are one of the best opportunities to profit for investors. Following that rule we discussed would cause you to miss out on these gains especially during recessions. If you could predict recessions and recoveries, you’d want buy these firms when they are valued to the downside. However, operating as someone who normally is a passive investor, it’s unlikely they possess that skill. If you don’t buy money losers, your risk prior to recessions decreases. This strategy can lower the beta of your investments.

The final aspect we’ll look at is the total earnings with and without the firms losing money. The real GAAP earnings are much more volatile than earnings excluding losers, showing that investing in the Russell has more risk than it looks.

It’s important to not have the wrong takeaways from the information in this article. Investing when the Russell 2000 has low earnings and a high P/E has historically been a great idea because you are buying low. The P/E isn’t a great timing device. If you want to be a great investor, the best strategy is to model out the normalized earnings adjusted for cyclicality. This process assumes there will be booms and busts and helps you realize when earnings are unsustainably high and when they are unsustainably low. The P/E can be high and earnings can be low, but stocks can offer good value. Overall, buying the Russell 2000 hasn’t been a bad idea, so don’t get scared out of the market. That’s not saying that past results indicate future ones, but it is saying that the Russell 2000 has done well when its earnings and P/E have been volatile.

Index investing in ETFs such as the Russell 2000 and the S&P 500 has been popular recently. The chart by FactSet shows the total assets under management (AUM) for mutual funds and ETFs. 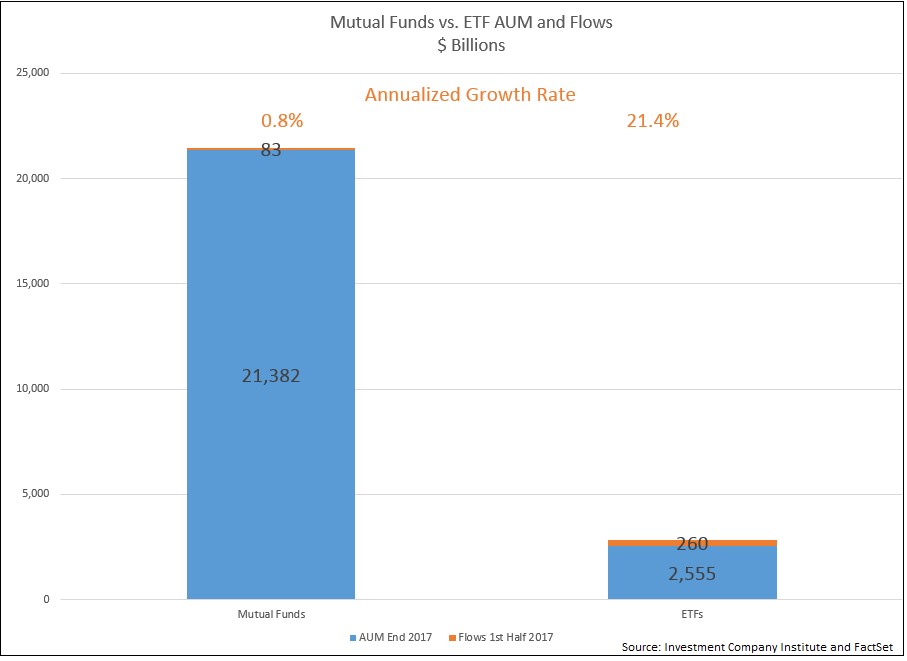 The mutual fund AUM is over 8 times the ETFs, but ETFs are growing at over 20 times the speed. The new money is going to ETFs. ETFs are already affecting trading as 2017 has been one of the calmest years in history. Imagine the effect in the next few years when ETFs are more important. While ETFs can calm markets when the economy is doing well, they might exacerbate selloffs. Passive investors are managing their own money which means inexperienced passive investors might be more prone to panic than seasoned mutual fund investors. Having your money in mutual funds may calm nerves because these investors trust, sometimes incorrectly, that managers can prevent large losses. Some investors panic and cash out of mutual funds during crashes, but it’s easier to sell an ETF than a mutual fund.

Mutual Funds performed terribly in the late 1990s as the tech bubble was reaching unthinkably high valuations. Sober investors were happy to underperform the Nasdaq in the short-term, because the bubble ultimately burst which resulted in mutual funds outperforming in the next decade. If market volatility increases, this could be a good signal that mutual funds could outperform in the years to come.

The takeaway from this article is that you shouldn’t blindly follow the passive investing trend. Index funds sell you stocks which aren’t earning any money. Secondly, mutual fund performance and active investing in general will probably increase in the next few years because it’s at a cyclical low. If you pick a great fund, it might be able to save you some money when ETF investors cause a cascade of selling in the next recession. It will be as though investors are throwing the baby out with the bathwater, so that will be a great time to pick stocks and to be an active investor. But in order to get to that point in time, as a passive investor, you are at greater risk to lose capital once volatility increases in the market turns in a negative direction. It’s better to be early than late. Therefore, you need to first and foremost preserve your capital, otherwise you wont have anything to invest with when the time comes.