Why Are Companies Adding Excess Debt? 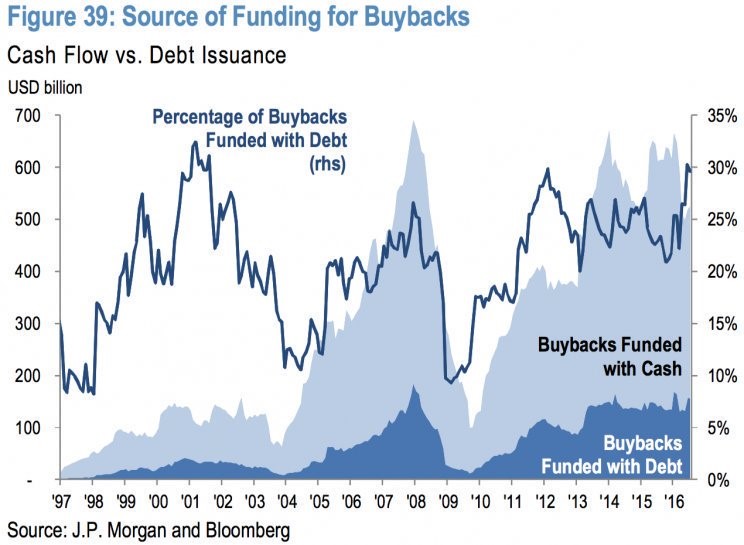 Every business cycle has a debt build up followed up an inevitable deleveraging. In order to grow their businesses in excess of existing cash flow, firms need to take out debt when the economy is expanding and they need to de-risk the balance sheet in times of financial stress to bring the debt to equity ratio to palpable levels, as well as to avoid cutting the dividend, having their debt downgraded, or in the worst case scenario bankruptcy. Firms obviously never plan to go bankrupt, but capital markets can seize up all at once, creating a liquidity crisis for indebted firms who would normally survive. Outside of liquidity crunches bankruptcies happen to poorly run businesses in weak industries.

It’s a fair question to wonder why firms take out so much debt during expansions. In a previous article titled Is There A Corporate Debt Bubble? we discussed the nuances of evaluating equity vs debt. Companies largely take out excess debt because management teams don’t know when a recession will occur. They get paid to operate the business and fund initiatives to grow the company. If a firm doesn’t take on new debt to grow the business, it can fall behind to competition. The management team can be fired for being too conservative instead of growing the company; meaning they don’t even make it to the end of the business cycle when their conservative stance would pay off. It’s easy to use hindsight to question why a firm would be aggressive before a recession, but at the time the demand supported those actions. We’re not excusing aggressive behavior with poor timing. Instead we’re explaining why it occurs.

Corporate Debt At A Record High For Median Firms

The discussion of why firms take out leverage is an important one now because of the heightened corporate leverage. As you can see, from the chart on the left, the aggregate net debt to EBITDA isn’t that high, but the median firm has record net leverage. 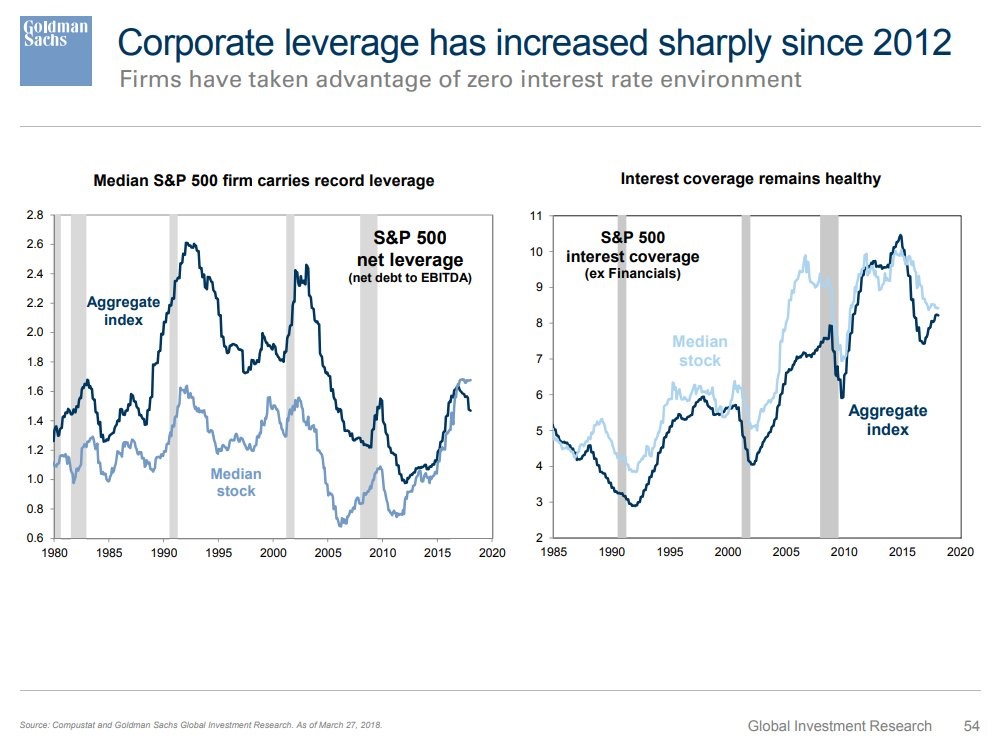 Firms are taking advantage of the low interest rates and 9 years of expansion. An elongate business cycle is a situation where being cautious hurts. If a firm decided to take less risk a few years ago because management thought a recession was coming, the firm would have missed out on many opportunities to grow its business.

Covenant Lite Loans Could Be A Big Problem

Covenant lite loans made up a much smaller share in the last business cycle. They are akin to adjustable rate NINJA (no income, no job, no assets) mortgages in the last business cycle. Covenant lite loans offer higher interest rates to lenders, to compensate for the increased risk of offering these loans. Adjustable rate mortgages offered lower rates for borrowers who took on the risk that rates would rise in the future. The concept of offering loans to people with no income is viable in certain circumstances, such as extending credit to a startup that doesn’t yet have income. If the borrower has a high credit score and sufficient downpayment, it could make sense for lenders. The problem was lenders gave out too many of these loans leading up to 2008, turning it into a de-facto bet on housing prices going up.

The concept of giving out leveraged loans to businesses without restrictions is viable, but it’s questionable if it should dominate the leveraged market. As you can see, first lien loans are requiring less covenants than ever before. Unfortunately, this situation will only reverse if there’s a spree of defaults. In the last cycle, the cov-lite loans defaulted at a similar rate as loans of the same quality. However, those loans were made at the end of the cycle. Just like the NINJA loans, cov-lite loans may have been a good concept taken too far.

As we have discussed before, stock buybacks are often maligned because people wrongly think buybacks are mostly funded with cheap debt. There’s no doubt corporate debt would be a problem if interest rates spiked. However, the issue is the debt, not buybacks. As you can see from the chart below, there has never been a time where over 35% of buybacks were funded with debt in the past 20 years.

Buybacks are mostly funded with excess capital. Buybacks are simply a place where issued debt goes. Firms also issue debt to pay dividends and acquire firms. M&A can be risky at the end of the business cycle, as we have discussed previously, because valuations fall soon afterwards.

Let’s look at the capital allocations investors have rewarded in the past 27 years. As you can see in the chart below, dividends and buybacks have collectively fared best, capex and research and development came in second, and M&A saw stocks fall over time. 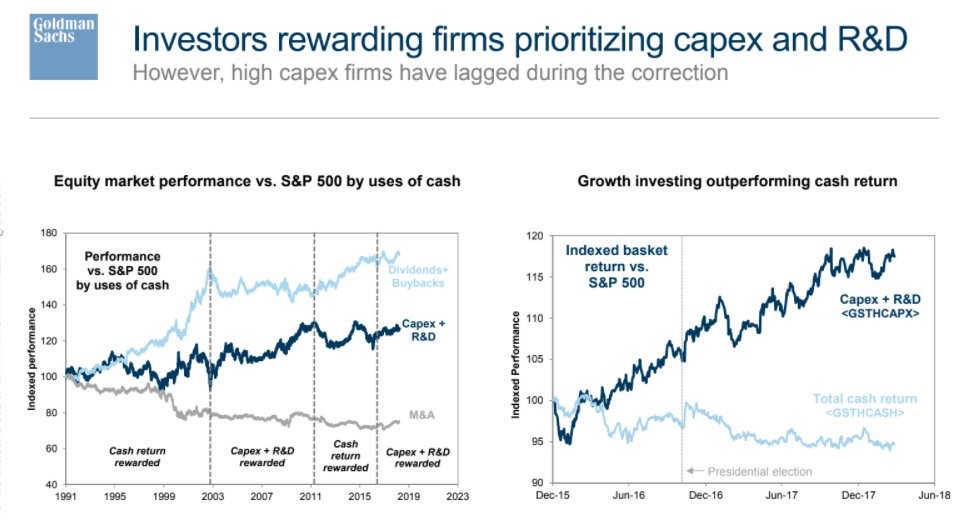 While taking out debt to buy back stock could be a problem, the worst choice is taking out debt to make an acquisition. A premium is often paid on the purchase and cost savings are exaggerated. The chart on the right zooms in on the recent action showing that firms spending capital on capex and R&D have done the best since the election. We like the full cycle performance analysis to measure risk, but this chart can help with short term decision making.

How Firms Will Spend Their Cash In 2018

The table below shows the expectation for capital usage in 2018. 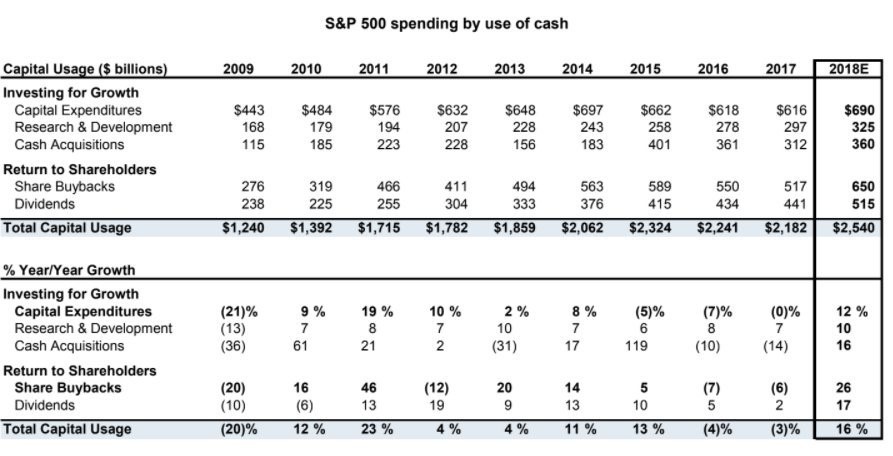 The critique that the tax cut will go to buybacks exclusively isn’t true as the capex will increase 12%, R&D will go up 10%, and cash acquisitions will increase 16%. Even though some say firms haven’t invested in R&D this cycle, it has actually been the category which grew the most consistently. Buybacks should hit a record high which should be good for market value appreciation. Cash acquisitions are bad for the buyers in general, but great for the firms being purchased.

Firms may have taken out too much debt this cycle; the riskiest type of debt might be the cov-lite loans which now make up over 3/4ths of leveraged loans. Buybacks can be risky if they’re done with debt, but the worst decision is likely making an acquisition at the end of the cycle with debt. There will be an increase in all categories in 2018 because of the tax cut. The biggest growth will be with buybacks which should increase 26%; which is great for investors.