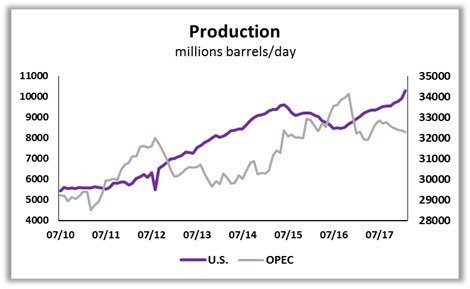 We previously reviewed the oil market in U.S. Shale vs. OPEC Oil Price War: Who Will Win?. American production of oil accelerated from 2012 to 2014 as non-conventional oil and gas drilling in shale led to a revolution in production known as fracking. The fracking revolution didn’t affect the marketplace until late 2014 when the price of oil collapsed due to a supply glut. As you can see in the chart below, this big price correction changed the game for the oil market. Previously, OPEC cartel had controlled the market for years up until this point.

This situation utilizes game theory because OPEC makes decisions which affect countless other players. It’s not like a normal market where supply and demand are the only factors. OPEC can either decide to raise production which lowers the price or cut production which increases the price. Both choices have clear positives and negatives for OPEC nations. High production means more volume is sold, but the price is lower. Production cuts mean lower supply, but higher prices. Low prices help demand and high prices hurt demand, but these factors are a bit limited in this scenario because the supply changes were what altered the price.

The interesting factor in play was how the choices would affect American frackers. Many highly indebted frackers went bust during this correction. The energy firms dominate the junk bond market as we’ll discuss later. OPEC could have accelerated its production to keep prices down to crush the frackers. That would allow OPEC to maintain market share as its competitors would be weakened. The hope for OPEC would be once prices rebounded, the frackers wouldn’t be there to produce oil.

However, OPEC didn’t choose that route. Instead it cut production with the goal of getting the supply glut down. As of spring 2018, the supply glut is worked through which is why oil prices rallied to the high $60s in WTI terms. OPEC didn’t crush American frackers. This price crash was arguably a great thing for US production because during the downturn firms lowered their drilling costs. The temporary decline made the firms stronger. This is why US production is now higher than ever before. OPEC is profiting in the short term by selling oil at higher prices, but they lost market share.

One other point to consider is that hydrocarbons might not be used as the principle form of energy 50 years from now because of the potential rise of renewables. The question for OPEC is how valuable the asset will be in the long term. If OPEC thinks oil prices will decline in 20 years because of decreased usage, the organization may care more about the short term than the long term. It can invest in solar and wind to maintain its place as the energy provider of the world. While this is a possibility, it’s safe to say America is the clear winner in this battle since production is at new heights. The US actually exports oil. It imports oil too because there are various grades used.

This brings us to 2018 where OPEC still has cuts and US oil is pumping more than ever. Because American production is market based unlike the OPEC cartel, it’s better for consumers because no one firm controls the market and can decide to limit production to increase prices. The fact that OPEC is a cartel made the situation highly political because OPEC could destroy economies by limiting production growth. American production has taken some of the political power away from the middle east. The other reason why oil prices have spiked in the past is because of how politically unstable the entire region is. This is partially why prices have increased in the first 3.5 months of 2018. As we mentioned, the frackers are more price sensitive than OPEC. OPEC nations can drill cheaply, but they need high prices to fund their governments.

The chart on the left breaks down how each year of production up until 2022 is affected by changes in price. The ability for frackers to produce oil in the $40 range will be limited as the quick decline rates of production these wells have hurts the ability to cheaply produce oil in the next few years. Looking at 2018, you can see that with oil in the high $60s, production is growing quickly. This should put a price ceiling for oil somewhere in the high $60s or low $70s. At that price, it’s only a matter of time before supply starts to outweigh demand. The price floor should be somewhere in the low $50s based on fracking production. The two catalysts which can cause prices to go above the ceiling and below the floor are geopolitical strife and economic growth fluctuations.

Because fracking is such a risky business, these firms often need to issue debt that’s rated as junk. The high default rate caused by oil price declines hurts their rating. Because frackers dominate the junk debt market, the record low recovery rates in 2016 made it look like the economy was in dire straits, possibly worse than the 2008 financial crisis. The chart below shows the recent big rally in the junk bond market which has been caused by the rally in oil prices. The junk spreads have tightened way more than investment grade bonds. Also, the rally in junk bonds hasn’t been mimicked by the stock market as it’s only ‘risk on’ for energy. 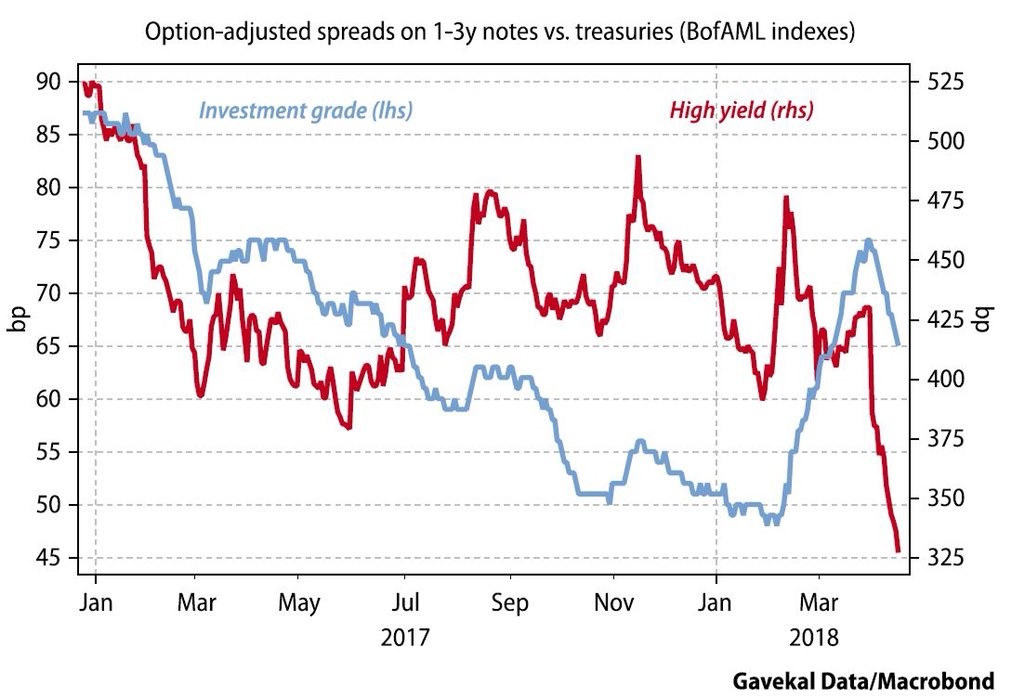 It may be time to avoid energy stocks and junk bonds because oil is near its ceiling as production will be increasing to sell at these elevated prices. Furthermore, we’ve shown in many previous articles that the U.S. and especially the European economy are experiencing slowdowns. This will cut into demand. Rising supply and declining demand is a recipe for lower oil prices which are now more market based because the OPEC cartel doesn’t have complete control over them. That being said, the OPEC cuts might limit the declines in oil prices when they head into a downturn.