In the past few years stock buybacks have been increasingly criticized by investors who believe the stock market and economy are in a bubble. The main evidence they bring to the table is that companies bought back a record amount of their own shares before the financial crisis in 2008. The market fell about 55% in 2008, thus making the stock buybacks poorly timed. Furthermore, some firms issued shares at the suppressed low prices following the crash due to liquidity issues. However, this is a poor argument against buybacks because there was also high capex spending and elevated M&A activity before the recession. M&A activity and capex also usually peak before recessions as the economy is thriving and capital is flowing. 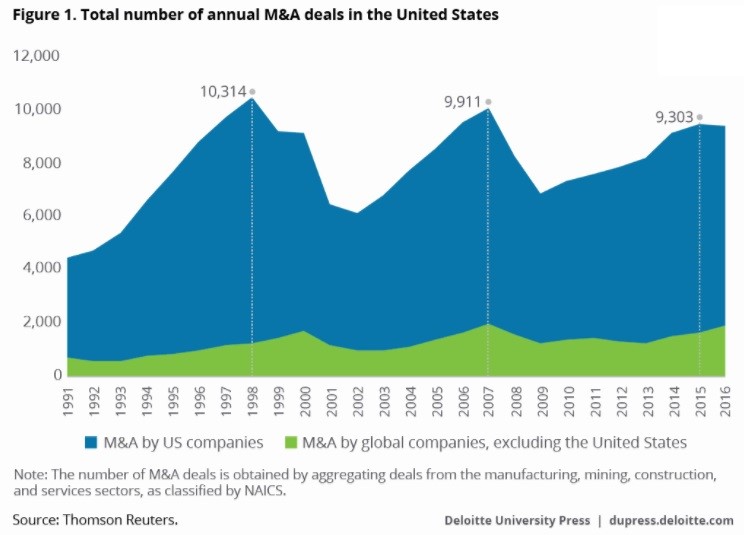 The total deals reached a high in 2007 which was the year the stock market peaked and when the recession started. If valuations are high and the economy is about to crater, no matter where a firm puts the money, it will look like a poor investment in a few years. It seems more rational to return the capital to shareholders through dividends and buybacks instead of making an expensive acquisition, which can cause a company to take on excessive leverage that would devastate it during a recession. When acquisitions are made, the cost savings, commonly referred to as “synergies”, are often overly inflated, especially when the businesses aren’t similar. Shareholders can correctly criticize an acquisition if they think it could have been cheaper to get into that new line of business and grow a product organically. A shareholder can’t rationally get mad at a company for buybacks, since if you own the stock, you must think it is undervalued which means buybacks make sense – otherwise you would sell the stock. Stock buybacks are also the tax efficient way to return capital to shareholders compared to dividends which are not tax efficient.

It’s Irrational To Get Angry At Efficiency

The idea that a company should spend more on the business is not always practical. Most mature companies with buybacks and dividends have cost cutting programs because they want to improve their margins. Telling a company to spend more money on initiatives and investments even if the company does not see viable investment options, is the exact opposite way to improve shareholder value. Having excessive cash to return to shareholders is a sign the company is operating efficiently. It’s wrong to be mad at a company for doing so. On a company specific basis, it’s fair to critique the management, however, because there is always room for growth and innovation in any business or sector, even if it means cannibalizing your existing operations, but spending more money on them just to avoid stock buybacks isn’t a rational critique.

Becoming frustrated with companies that have extra capital is like getting mad at your spouse for getting all the necessary items at the super market while coming in under budget. Why waste money when you don’t need to? Plenty of firms have rising stock prices and growing profitability while buying back stock. It’s wrong to compare a mature company’s capital allocation program with a growth firm which doesn’t buy back stock. Sometimes it’s simply not possible to make a mature company grow again. A mature firm investing all its capital to become a growth company would be very risky, just like how M&A activity can be risky.

Firms Are Investing While They Buy Back Stock

Sometimes investors look at a firm which has bought back stock, but has seen its stock fall for years and claim the buyback was the problem. However, the real problem was failed initiatives and execution. The wrong decisions were made on how to run the business and have it properly positioned for the future. If anything, not spending the money on buybacks and instead using it on capex or M&A would have probably made the situation worse since the management team, in such a scenario, could be deemed incompetent.

The chart below explains what we mentioned earlier. Just like M&A activity, fixed investment peaks before recessions when the economy is good.

Right before a recession the timing is bad for pretty much every capital allocation activity except keeping the money in cash or paying back debt. Most firms clearly can’t predict recessions, so it’s not fair to expect them to do so. If collectively all firms decided to hoard cash, then that would cause a recession in itself. The chart also shows that money can be spent on investments and buybacks simultaneously. Since both grow when the economy is strong, it’s proof firms can do both.

The percentage of capital which is collectively given to shareholders compared to the percentage that is invested in capex vacillates cyclically. It’s sanctimonious to say the percentage is too high or too low because you are claiming you know better than every single management team in the S&P 500. It’s certainly fair to point out ways an individual firm can be run better, but it’s wrong to make broad brush strokes.

If you are asking a firm which already spends money on its R&D and new initiatives to spend more on capex, you are likely asking it to spend the money inefficiently. However, even if the firm invests the money efficiently, it might not be the best use of cash. As you can see from the chart below, the index which measures firms with the biggest buybacks did better than the index which measures the group of firms which allocated capital the most efficiently from April 1993 to August 2015. Big outperformance occurred when buybacks were the largest during the last few years of this period.

With that said, this does not indicate that companies should stop investing in capex and instead solely focus on stock buybacks. Stock buybacks are simply a less risky form of shareholder returns, versus investing additional capital in innovation that takes years to be proven in the marketplace (more risky). As a result, investors are more eager to bid up valuations of companies that continually perform buybacks, hence potentially describing the delta between the S&P 500 Buyback Index and S&P 500 Capex Efficiency Index. Cash used by companies to perform buybacks indicates that the business and capex efficiency is maxed out and that there is no better use for the cash other than to return it to shareholders.

One of the reasons people are motivated to criticize stock buybacks is because they think they just enrich shareholders without improving the economy. Firstly, it’s the corporate profits which enrich shareholders. The buybacks simply move the capital from the business to the shareholders. Secondly, buybacks help GDP just like capex and M&A activity. Stock buybacks return capital to shareholders who then invest the capital in other GDP producing companies or activities thus spurring competition, innovation and improved standard of living for everyone. Prudent asset allocation is good for the economy.

There are certainly negative aspects that could be argued against stock buybacks. Here are a few additional articles that further discuss stock buybacks: