Are Stock Buybacks Good Or Bad? 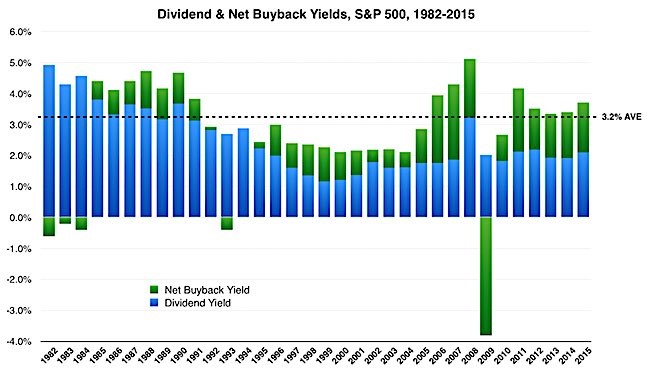 There is an intellectual war ongoing over stock buybacks which continues to brew even as many clear-cut answers seem to exist. It’s difficult for bearish investors to cede any ground because they’ve been sold on the story that buybacks are the root of all manipulation in the stock market. Over the past decade the dynamics of the market have become more passive with ETF’s and algorithmic trading as well as the prevalence of increasing stock buybacks and quantitative easing.

While we are not defending any of these practices these new factors all play exceedingly different roles in the changing market dynamics. For example, stock buybacks are often referred to as being a manipulation to increase price per share, which distorts earnings per share and other metrics however while this may certainly be a principal reason for some buybacks, the overwhelming rational is much less sinister. As we have detailed in extensive details on multiple occasions, stock buybacks are a more efficient method of returning capital to shareholders in place of dividends which are immediately taxable.

Additionally, with profit margins at all-time highs for many corporations, companies simply aren’t able to invest all the excess capital into the future of their business, which is a much more alarming factor for long-term economic prosperity and viability of existing businesses. Whenever anything is generalized as to suggest that something is true for everything, such as saying that all stock buybacks are evil its not an accurate statement because the economy is a complex system with lots of moving parts.

Keep in mind, our objective is to be practical in our analysis of these various market dynamics and shouldn’t be considered as an endorsement for nor against a particular action. Every company has a unique circumstance. It is simply our perspective that most of the arguments made about stock buybacks are exceedingly one-sided since bias is something that is extremely difficult to remove from the investing process.

There are certainly situations where stock buybacks shouldn’t be done. For example, borrowing money to buy back stock isn’t a great idea. Buying back stock at the peak of the cycle and issuing new shares at the bottom is also a bad idea, which is the very opposite of buying low and selling high. In this situation companies buy high and sell low, in addition to the debt obligations that they take on. It’s worth noting that the companies that buy back stock at the top of the cycle usually aren’t the same ones issuing shares during recessions. The chart with the S&P 500 aggregate buyback numbers below depicts the situation as though that is the case, but recognize there’s a diversity of good and bad operators within the S&P 500. You can’t generalize the financial decision as a way to scam shareholders when many firms don’t utilize it in that manner.

It’s confusing to see how those who attack buybacks don’t attack dividends. When asked about where the money should go, these buyback critics always say R&D and capex, but they also don’t have a problem with dividends. If dividends are okay, then that contradicts the argument against buybacks. Buybacks retire shares so that less dividends need to be paid to shareholders in the future. Furthermore, companies may not go public to begin with if the option to buy back shares wasn’t available. That would be like if a company which issued debt, couldn’t pay back the principle ahead of time. Would you take out a mortgage, if you couldn’t pay back the loan ahead of time to save money? That option is valuable and explains why US capital markets are so great at allowing businesses to thrive.

The chart below shows how companies have changed the way they return cash to shareholders over time. As you can see, buybacks have become much more popular in the past 20 years.

Yields Can Come From Buybacks

This chart further puts a death knell to the argument that buybacks are bad by showing stocks’ yield in a way that includes buybacks and dividends combined. The yield an asset provides can come from either buybacks or dividends because dividends provide cash to shareholders and buybacks increase the value of each share. The chart clearly shows how bad 2009 was for buybacks. Just because one year, which had a financial crisis, saw many firms issue shares doesn’t mean buybacks are a bad idea. Some bearish investors believe an even worse crisis is around the corner because of some of the previous new trends we mentioned earlier. It’s important to remember that 2009 should not be considered the norm in your analysis since it stands out significantly from the norm in a historical chart which shows over 30 years of data. Debating whether the next recession will be worse than 2008 is another argument which we won’t discuss in this article.

The goal of this post was to give you alternative objective arguments on the major topics which are being debated in professional financial and economic settings. Bearish investors think stock buybacks are financial manipulation however there are numerous reason why stock buybacks are more prudent than for example dividends. However this doesn’t mean buybacks are right for every company and certainly some executives abuse this policy for personal gain that hurts the company in the long-term.