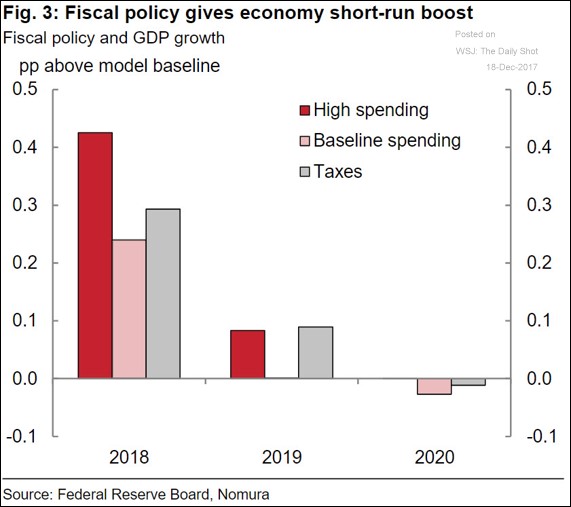 Throughout the expansion from about 2010 to 2016 the Federal Reserve told us it wanted to step back from its stimulative policies, which were QE and zero percent interest rates, but it couldn’t because fiscal stimulus wasn’t coming. Furthermore, there have been times in that period where fiscal policy hurt the economy, such as the debt ceiling showdowns. Waiting for fiscal stimulus from a divided Washington D.C. was unreasonable, and it never occurred.

Fiscal Stimulus Before A Recession…

Ever since Trump was elected and the GOP held control of both branches of Congress, investors and economists waited for fiscal stimulus to replace easy monetary policy. At this late stage in the business cycle where the expansion has been going for 9 years and inflation is likely to increase in 2018, the economy shouldn’t need a stimulus. The time for that has passed. However, we’re getting a tax cut because there are usually legislative benefits given to voters following a major election. It’s important to distinguish this new tax measure as being temporary fiscal stimulus, not a permanent tax cut, much to the chagrin of Republicans because when the Democrats win, they will likely either repeal the tax cuts or let them expire.

The stock market has been treated very delicately by the Federal Reserve as it approaches raising interest rates and unwinding the balance sheet. 2017 was an interesting year because the tradeoff from easy monetary policy to easy fiscal stimulus seemed as though it would not happen on multiple occasions. The concern was that the Fed would raise rates quickly and unwind the balance sheet under the assumption that the GOP would fail to achieve any fiscal stimulus.

Now that the hand-off has occurred following the passage of tax cuts, let’s look at how policy will play out in 2018. According to the Tax Policy Center, 80.4% of Americans will be getting a tax. In a poll, the Wall Street Journal found that only 17% of respondents thought they were getting a tax cut. If people are expecting a tax increase because of false information, then they will probably be too pessimistic on the economy and spend less initially. When they realize their taxes will go down unless they are wealthy and live in a high tax state like New York or New Jersey, they will be euphoric and potentially spend more money, boosting economic growth. In a few weeks after the Senate passed the tax bill, there were already $95.9 billion in stock buybacks announced. More buybacks are likely to be announced as firms figure out how much of a windfall they will get from the corporate tax rate being lowered to 21%. Most companies already paid less than the 35% corporate tax rate, but there will still be a benefit for most firms.

The chart below shows the benefit the tax cut will give the average Americans in 2019, broken down by income group. Unsurprisingly, the tax cuts are going to the wealthiest Americans since they pay the most taxes. The hope is that these benefits will boost investment, increase capex or at least boost consumer spending. 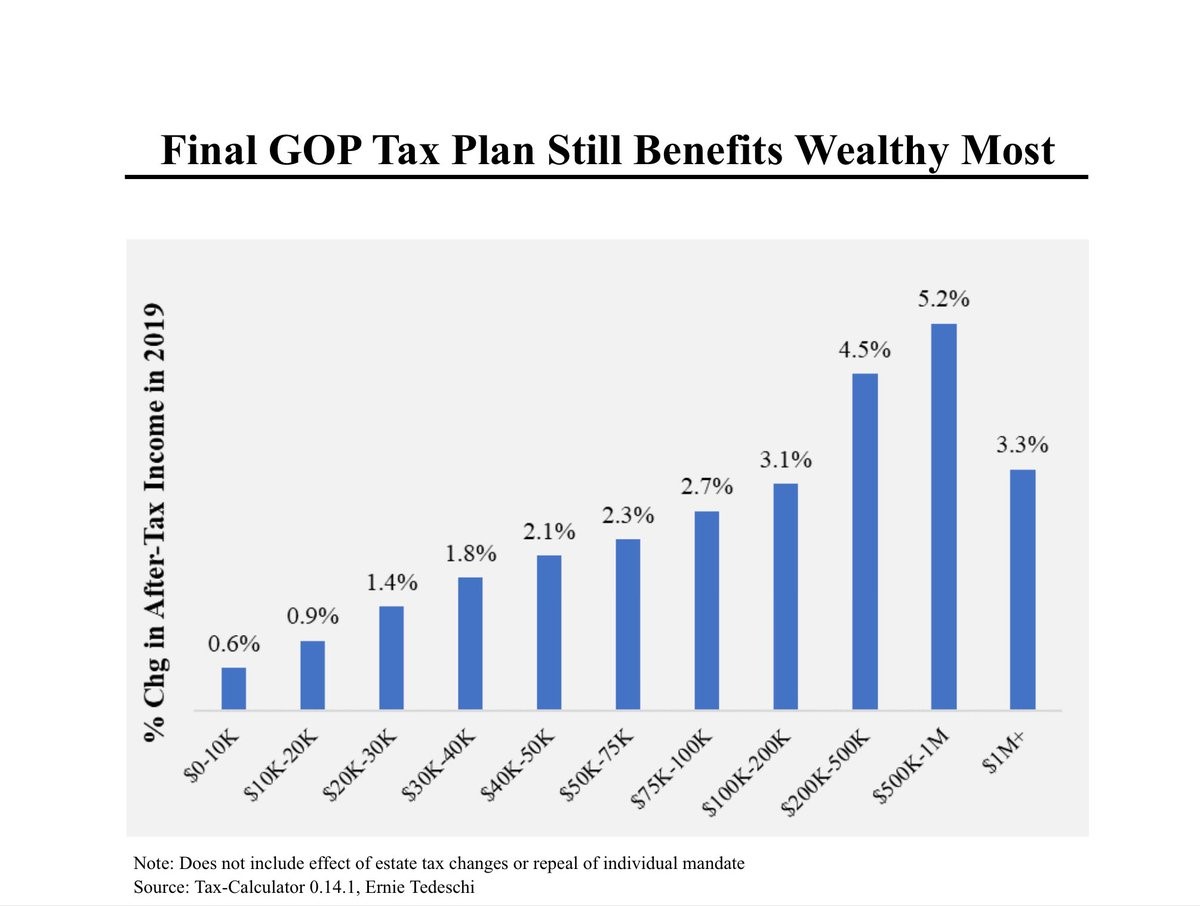 The Tax Cuts Will Benefit Most Americans

The worry is the tax cuts will act as a temporary stimulus, as we characterized it, instead of a long term driver of growth. It’s possible that tax cuts help research and development spending which could boost productivity growth, but the last time there was a repatriation tax holiday where firms got a windfall of cash, the money went to buybacks.

The chart below supports the notion that this benefit to GDP growth will be temporary. As indicated in the chart, the effect largely dwindles by 2020, hardly long-term.

How Is Quantitative Tightening Impacted By Tax Cuts?

As we mentioned, the Fed got a head start on the rate hikes and unwind in 2017 before the GOP passed the tax cut. The table below shows the guidance the Fed put out in December 2017. 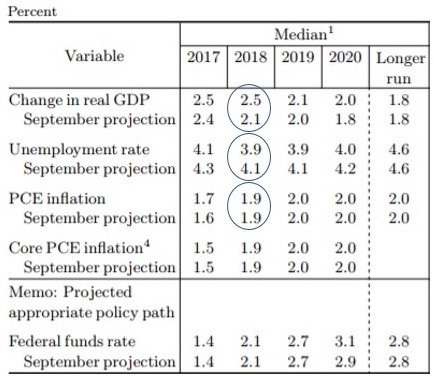 The Fed plans to raise rates 3 more times in 2018. The rate hike cycle is expected to go until at least 2020. If it makes it that far, this would be the longest expansion for the United States in modern history.

As we mentioned, the Fed is also unwinding its balance sheet. The plan has been to shrink it from $4.5 trillion to between $2 trillion and $2.5 trillion in the next few years. The Fed started by letting $10 billion in bonds mature per month. It increased that up to $20 billion per month starting in January 2018. The increase will continue every 3 months until the unwind reaches $50 billion per month. 2018-2020 is expected to be the sweet spot of this unwind if nothing goes wrong in the economy. The chart below shows how the unwind went as of December 13, 2017. There hasn’t been much action yet. 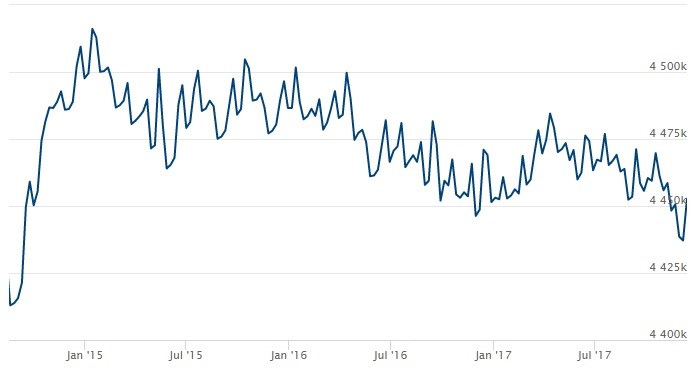 As we mentioned, the trade off from monetary to fiscal stimulus worked, but it might not be a great idea to stimulate the economy at the end of the business cycle. Another aspect to consider is that the Fed will be raising rates and unwinding the balance sheet into high deficits caused by the tax cut. This will cause the financing situation in the United States to become materially worse.

As indicated in the chart below, rising deficits will effectively double the impact of the unwind as it will potentially force yields to increase.

The charts below give longer term deficit projections with the effects of the tax cut added on. The tax cut is expected to cost $1.46 trillion over 10 years. The effect is lowered to over $1 trillion if dynamic scoring is used. Dynamic scoring is when economists assume the tax cut will add to economic growth, boosting tax revenues. 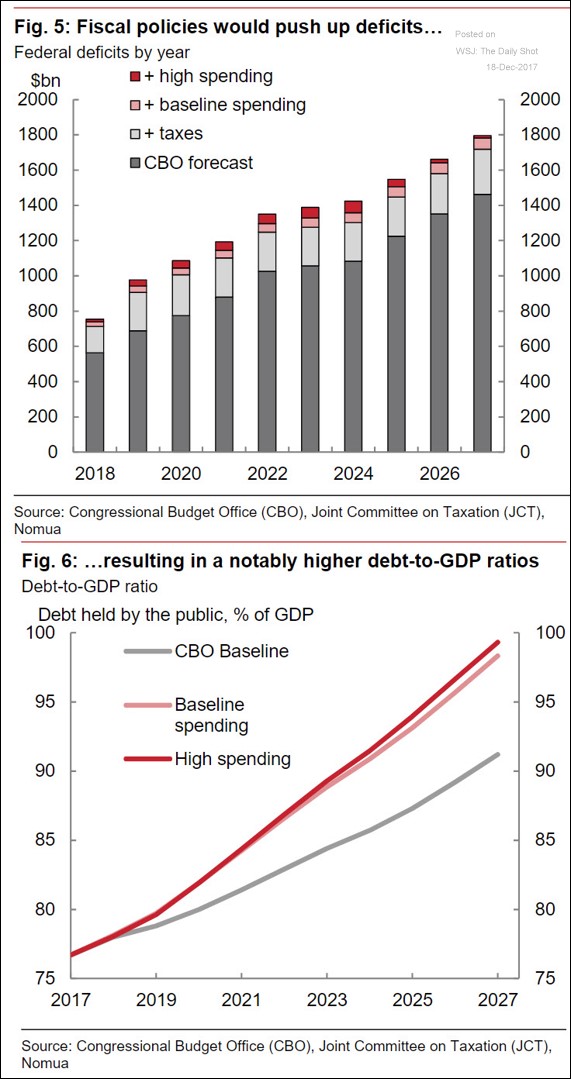 The tax cuts aren’t coming at a great time because the economy is at the end of the business cycle. It would make more sense to stimulate the economy when it’s in a recession. Once we reach a recession which is inevitable because the economy works in cycles, what type of stimulus will be left to use? The other problem is federal government financing costs are going to increase just as the deficits increase, putting pressure on the government’s already strained balance sheet. These assumptions expect no recession. If a recession occurs in the next few years, the deficits will balloon, potentially causing the Fed to do another round of QE to backstop the government. That would be debt monetization. On the positive side, most Americans will have more disposable income and corporate profits will increase, boosting stock prices, in the short-term at least. What is given to you by tax cuts, will be taken away by increasing inflation as a function of higher government debt to gdp ratios in the long-term.

One hand giveth, the other taketh away.