Do Stock Buybacks Deserve The Blame For Everything? 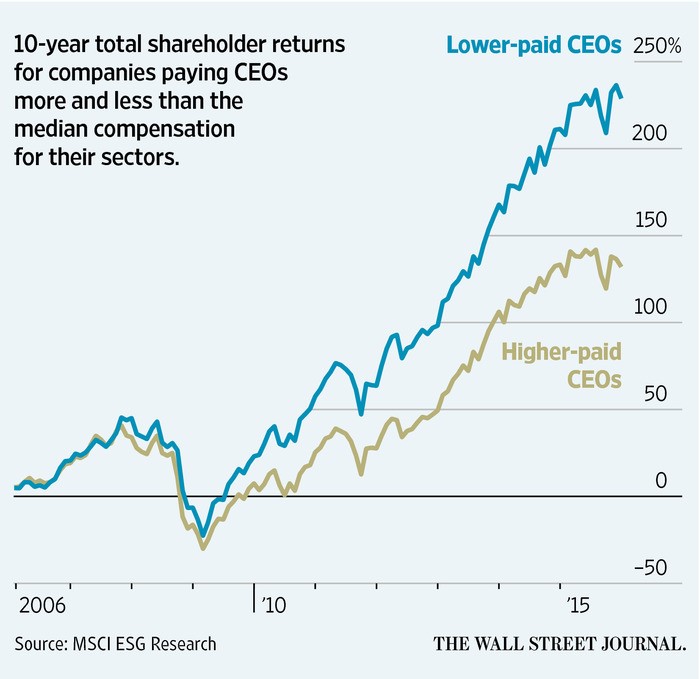 Introduction: Stock Buybacks Are Not Evil

Lately stock buybacks are being maligned to extensive proportions. Critics issue blanket statements blaming  stock buybacks for excessive executive compensation, causing a bubble in equities, and the decline in productivity growth. While these are all appropriate criticisms of buybacks, they miss the mark. If you are a shareholder, you should welcome buybacks, since in the short-term stock buybacks decrease the number of shares outstanding, thus increasing the price per share. Buybacks are just a more efficient method of returning cash to shareholders besides dividends. It’s possible issuing a buyback program could be the wrong move, but it’s inaccurate to make the blanket argument that most companies are mistakenly buying back stock.

If there were other great places to invest the money, wouldn’t management teams find them? By saying companies are managing their capital incorrectly, you’re implicitly saying that you know a better place to invest the money. This is similar to watching the Olympics from your couch and suggesting that its easy to be as fast a swimmer as Michael Phelps is and that you can do it too. You might be able to find an individual company which should make a specific strategic investment that it isn’t doing, but making blanket negative statements about buybacks is ignorant. If you think stocks are generally too expensive, then an acquisition isn’t reasonable either. The only safe option would be keeping the money in cash. Firms are also criticized for having too much cash on the balance sheet instead of investing it in new initiatives. It’s not a great argument to say companies should invest in their businesses instead of plowing the money into buybacks because usually buybacks come from the excessive cash on the balance sheet after the investment decisions are made.

Buybacks Are Not Criminal

As with anything facing criticism, over the top arguments are made against buybacks. It’s not enough for people to say buybacks are bad, they go even further, saying they are fraudulent. Even if a company borrows money to buyback stock, that’s not fraudulent because it’s not deceptive. Also buying back stock with borrowed money can make sense if profits are seasonal, but the company wants to have the buybacks be evenly distributed throughout the year. If companies are honest about their intentions and are working in the best interest of shareholders, there’s nothing fraudulent about buying back stock. If shareholders disapprove of this because they want more long term investment into the business, they can vote the management team out or just vote with their feet by selling the stock.

This also brings up the criticism that companies should not be concerned about shareholders and should solely focus on the consumer and “do the right thing”. What is the right thing? If a company is not delivering value to its consumer, then this creates an incentive for competition to fill that void and provide the same consumer with better value. If a company is incorrectly distributing cash back to shareholders in the form of stock buybacks when it should be investing in its business, then it will pay the price in the long-term by either losing business or going out of business. We have detailed this dilemma previously, in our article: Stock Buybacks Harm US Competitiveness.

Many people who criticize buybacks do so because they don’t like how executive compensation is structured. They think management teams make too much money and that buybacks are used to pump the stock in the short term to make the executives money. In this case, the issue isn’t really about buybacks. It’s about agency risk and management teams making too much money. Agency risk is a real threat. Because the average CEO stays in that position for an average of 7.4 years, there can be issues with them working for the short term. Stock based compensation is one method of making sure management has ‘skin in the game’, but it’s not perfect.

CEO pay is also a problem. This isn’t a political argument about economic inequality. The argument is simply that the pay isn’t adequately matching performance. Warren Buffet is famous for making this criticism. This argument is supported by the chart below.

Ironically, the companies with the lower paid CEOs have much better 10 year stock performance than the higher paid CEOs. This is a legitimate criticism, but it doesn’t make sense to blame this on buybacks. Even the lowly paid CEOs get paid in stock based compensation. The issue is how much they are paid, not the method they are paid with.

What To Do With The Money?

Many critics get mad at stock buybacks because they see buybacks have increased in the past few years and the timing appears awful. We’ll go over why buybacks have increased next. Firstly, it’s true that buybacks increase during the point in the cycle when profits are flowing. That means that buybacks are the highest when stocks are the highest and the lowest when stocks fall. This looks inefficient, but you need to look at buybacks as simply returning cash to shareholders. It makes sense to return the cash when profits are high and no other investment is feasible and to cease returning cash when profits are low and uncertainty is high, for instance the company needing a cash cushion during periods of market stress. Generally, stocks move higher as we have detailed previously, so the timing isn’t as critical as it seems. The reason why it looked bad recently is because the buyback trend took hold last cycle. That cycle happened to end in the financial crisis which wiped away about 50% of the S&P 500. That period was unusually bad for stocks. Anything a company did before the crisis, whether it was an acquisition, a buyback, or a new initiative, looks bad in hindsight.

Why Buybacks Are Up (Long Term Trend)

Buybacks aren’t a new method of capital return, but they have had a surge in popularity in the past 20 years. In the early 1980s less than 10% of distributions to shareholders were through buybacks. Now it’s between 50% and 60%. The reason for this change is because buybacks are more flexible than dividends. Firms like to play up their dividend streaks as a reason to invest in the company. If the dividend is raised too high, it would need to be cut when business is weak which would end the streak. Therefore firms are conservative with dividends and change buybacks based on how the company is doing.

The two charts below show how buybacks collapsed during the financial crisis, while dividends fell slightly. In 2004-2008 5% of companies with over $500 million in revenue cut their dividend. 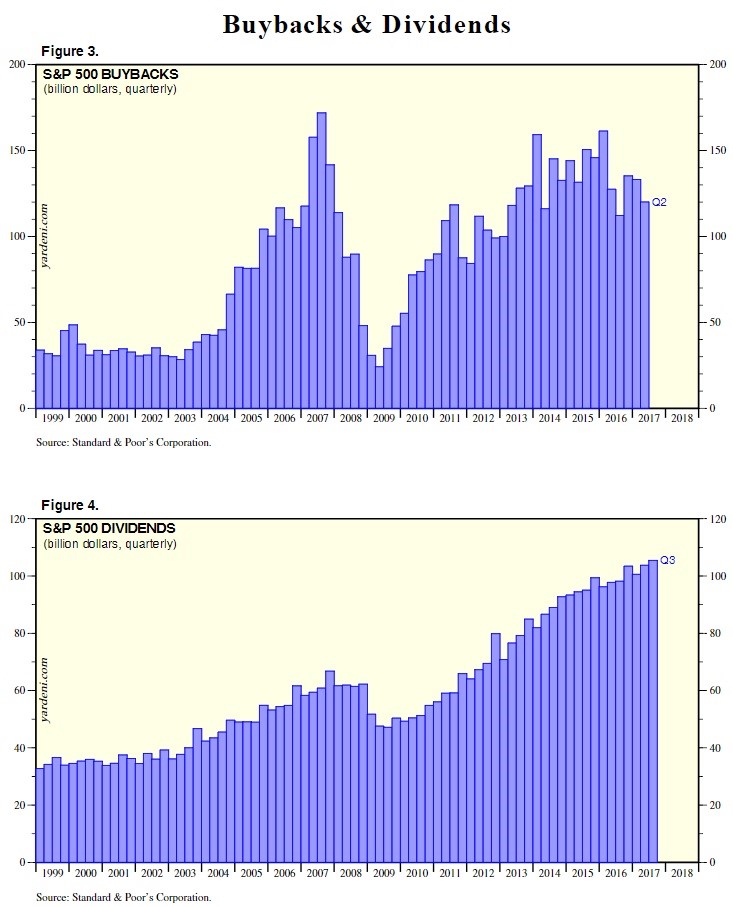 The other reason buybacks are popular is dividends require investors to reinvest the cash if they want to keep their stake in the company, while buybacks don’t require anything to be done. Secondly, buybacks allow taxes to be deferred while dividends are taxed the moment they are paid out. That’s very inefficient and destroys capital with undo tax payments if you plan to reinvest the dividends anyway.

Buybacks Are Down, Capex Is Up (Short Term Movement)

Buybacks are blamed for equity bubbles, but that shouldn’t be the case because they are just returning capital to shareholders. If you replace the word buybacks with capital returns, it would sound silly to complain returning capital to shareholders creates a bubble. Buybacks are blamed for a lot that went wrong during the financial crisis because they recently became more prevalent in the medium term. Lately buybacks have been falling as you saw from the chart above.

Stocks have rallied in 2017 despite falling buybacks because profits were up. Buybacks are also blamed for low productivity. However, the lack of fixed investment is not caused by buybacks. Firms decide they don’t have any place to invest. After they make that decision, they return the excess capital to shareholders. The problem is not having a place to invest the money, but that by issuing buybacks management is stating that an investment into the business and innovation does not bring about the same return on investment.

The graphic below shows how there has recently been a shift towards CAPEX and away from buybacks. 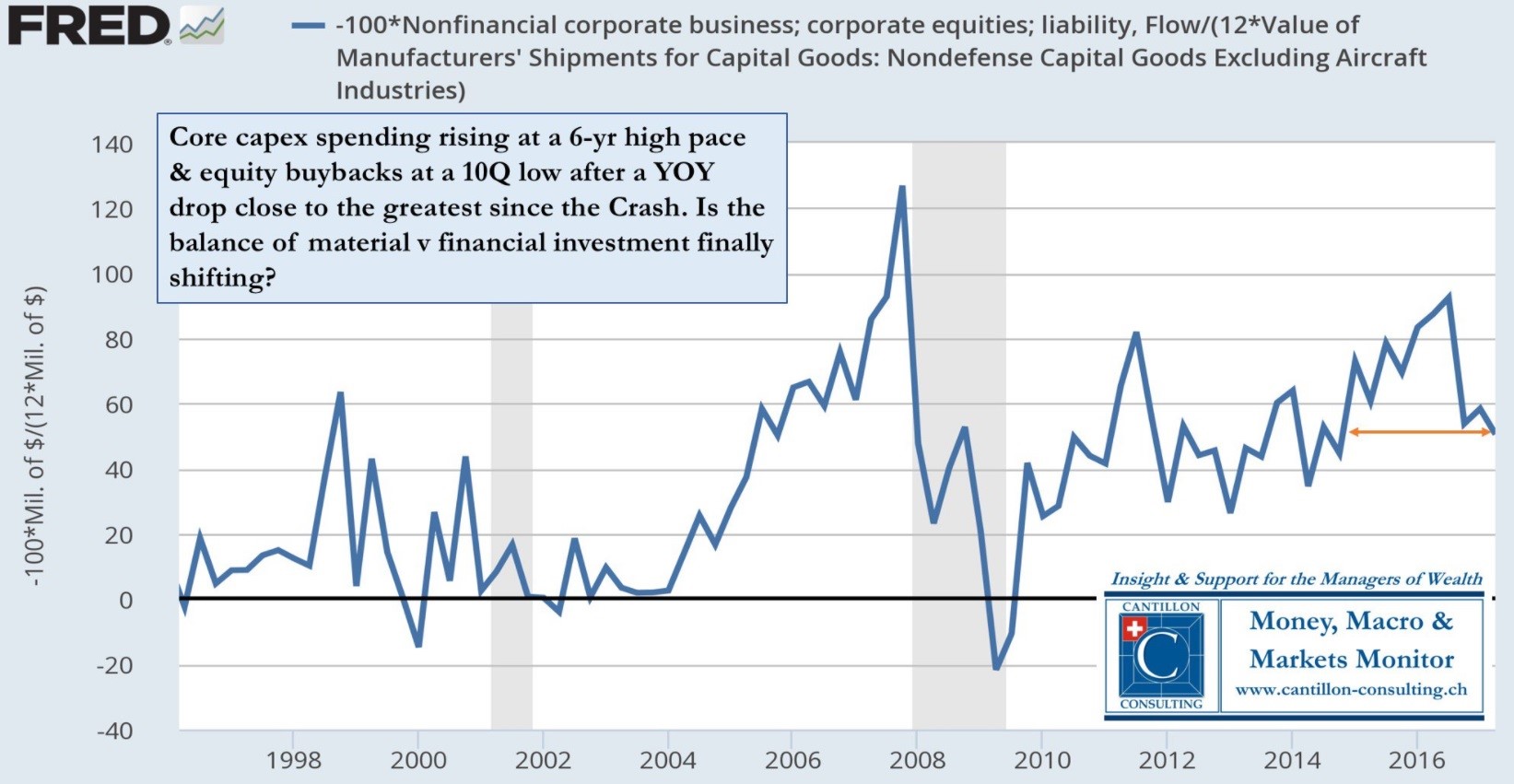 Core Capital Investment Up & Buybacks Down

That might be because regulations were promised to be cut by President Trump. It could also be because higher nominal wage growth caused firms to make investments to make employees more efficient since they need to be paid more. If buybacks were just about greedy management, why did this change just occur? The truth is that buybacks have nothing to do with short sighted management, for the most part. Quantitative easing has created an environment whereby the risks of financial investment are much lower than investing into the real economy. Now that quantitative easing is finally winding down, this has resulted in a decrease in stock buybacks which could actually be a bullish sign for upcoming economic growth.

Poor arguments criticizing stock buybacks occur because firms bought back stocks before the 2008 financial crisis and are doing the same during this business cycle. However, there were also record dividends given out, yet dividends aren’t being criticized. We showed why these arguments are wrong in this article. Share it with your friends who hate buybacks unnecessarily. If you have an issue with buybacks, then you should instead focus your negativity on monetary policy. Buybacks are simply a reaction, not the culprit.