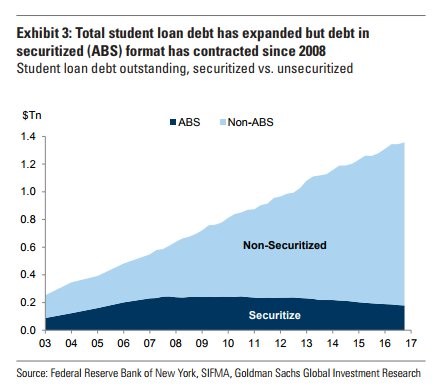 It’s widely known that the financial sector has become more centralized because of the mergers between some of the banks and other financial institutions during the financial crisis something we discussed in depth in Are Too Big To Fail Banks Safe?. For example, Bank of America acquired Merrill Lynch and JP Morgan acquired Washington Mutual. The chart below shows that as of 2015 the top 5 banks had 46.53% of the total commercial banking assets.

This is a situation that different sides of the political spectrum agree is a serious problem, what differs is the proposed solutions. Whether looking at those who advocate for capitalism versus those who advocate for socialism, both factions don’t think it’s a good idea for the top five banks to hold so much power. They need to be regulated heavily because they are all systemically important. It’s ironic that the banks were merged to save the system, but the mergers made the system more fragile because each institution has way too much importance.

Getting into the two sides of the argument, the capitalists don’t like the government acting to save banks it deems too big to fail with there being a potentially large tax payer liability on the line. Another aspect disliked by those arguing for capitalism is that the current system requires increased regulations and increases the cost for consumers. The solution proposed is to eliminate regulations and let the banks fail when there’s a recession in which the banks made poor investments, however if the bank is systemically important it creates a potential nightmare of a scenario for the systemic balance as a whole. It’s easy to say you’d let Bank A (hypothetical bank) fail in theory, but any politician who is told what will happen if Bank A fails will be scared into bailing it out.

The banks having a stranglehold on the financial system is also disliked by those advocating for socialism, and for good reason. The scandal where Wells Fargo was opening fake accounts for people to meet sales goals provides fodder for the critics. Regulations can’t solve this problem. It would be better if the consumer had more choices in deciding with whom to do business with as it pertains to their deposits, investments and savings. Competition is great for the consumer which reduces costs and increases value obtained. Libertarians say it would be fine if the banks got this large by serving the customer well, but these banks got big because of regulations created by the government that effectively made them the “chosen ones”.

The banks can tell horror stories about what it would if one of them failed which is what happened when TARP was organized during the financial crisis. Those arguing for socialism would say we have an oligarchy right now which gives the banks control over the government. The risks are socialized to the tax payer, but the profits are privatized to the stakeholders in the bank. The socialists’ solution to this problem is to break up the banks. That’s an equally unrealistic situation as letting them fail during a crisis because it’s like unwinding a ball of yarn. It would increase the relationship between the banks and the government. Since the government can’t craft regulations to prevent crises, it can only react to past crises, it’s difficult to see how it would do an effective job of picking apart the global monstrosities that today’s too big to fail banks comprise. Breaking up the banks could create a situation where US banks aren’t able to compete on the global stage which can place both depositors and tax payers at greater risk.

You might be wondering why this discussion is worth having since the economy is in a long expansion. It’s better to discuss the size of the banks now instead of waiting until the next crisis when it’ll certainly become an issue. The chart below shows the St. Louis Fed Financial Stress Index.

Financial Stress Has Been Low

This past few years have seen the least stress since the index was started in 1994. That doesn’t mean recessions have been eliminated. With a fragile banking system that relies on five companies for almost half of all deposits, an increase in stress could be a disaster. 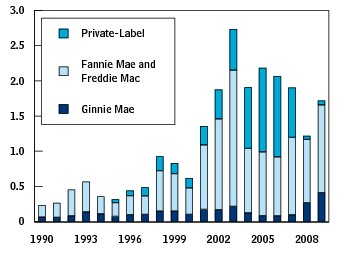 Mortgage Backed Securities Were Popular In The 2000s

Student loans are often compared to the housing market because loans have exploded in debt outstanding. While it’s probable that this situation won’t continue forever as students will stop going to college at current rates if prices keep increasing, making it unsustainable like the housing market was, there are many differences. One obvious difference is the default rates for student loans are already high. They’ve been high for a few years. The decline in housing prices was caused by defaults on mortgages. The defaults are already happening on student loans, so that probably won’t be a catalyst for a crisis. 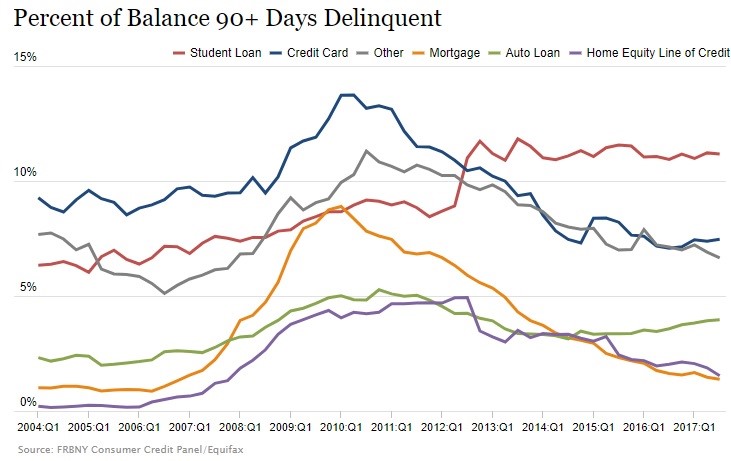 Delinquency Rates Have Been Elevated For Student Loans For 4.5 Years

The chart below shows another difference between student loans and the mortgages of the 2000s.

Student Loans Aren’t Securitized Like Mortgages Were In The 2000s

The amount of securitized student loans, which are backed by assets and packaged, has been declining since 2008. The growth in the student debt has been in the non-securitized loans making it different from the mortgage crisis. This is because there isn’t investor demand for securitized student loans, unlike in the 2000s where investors were clamoring to buy mortgage backed securities. This is good news because it means the systemic risk student loans could create is smaller. We’re already seeing the risk the student loan bubble has; millennials are taking longer to move out and get married and are having fewer kids. It’s difficult to get started in life when you have $35,000 in loans after graduation. The only beneficiaries are text book companies and college administrators. If this bubble crashes because of technology educating people at lower prices, it will be a good thing, just like we discussed regarding housing experiencing greater innovation. 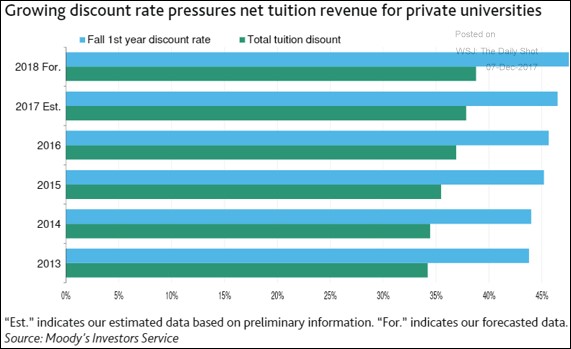 The discounts are expected increase in the future as well. It will be great if these tuition discounts occur throughout the college system as prices aren’t affordable for many, evidenced by higher student loans outstanding.

We looked at two problems the financial system faces. They are opposites. The centralization of the banking system is a problem, but it hasn’t mattered yet because the financial system isn’t stressed. The student loan bubble is a problem which has been wreaking havoc on millennials’ ability to have a solid financial future. Innovation and increased competition in the financial sector, housing and education will improve the value proposition and decrease costs for people.