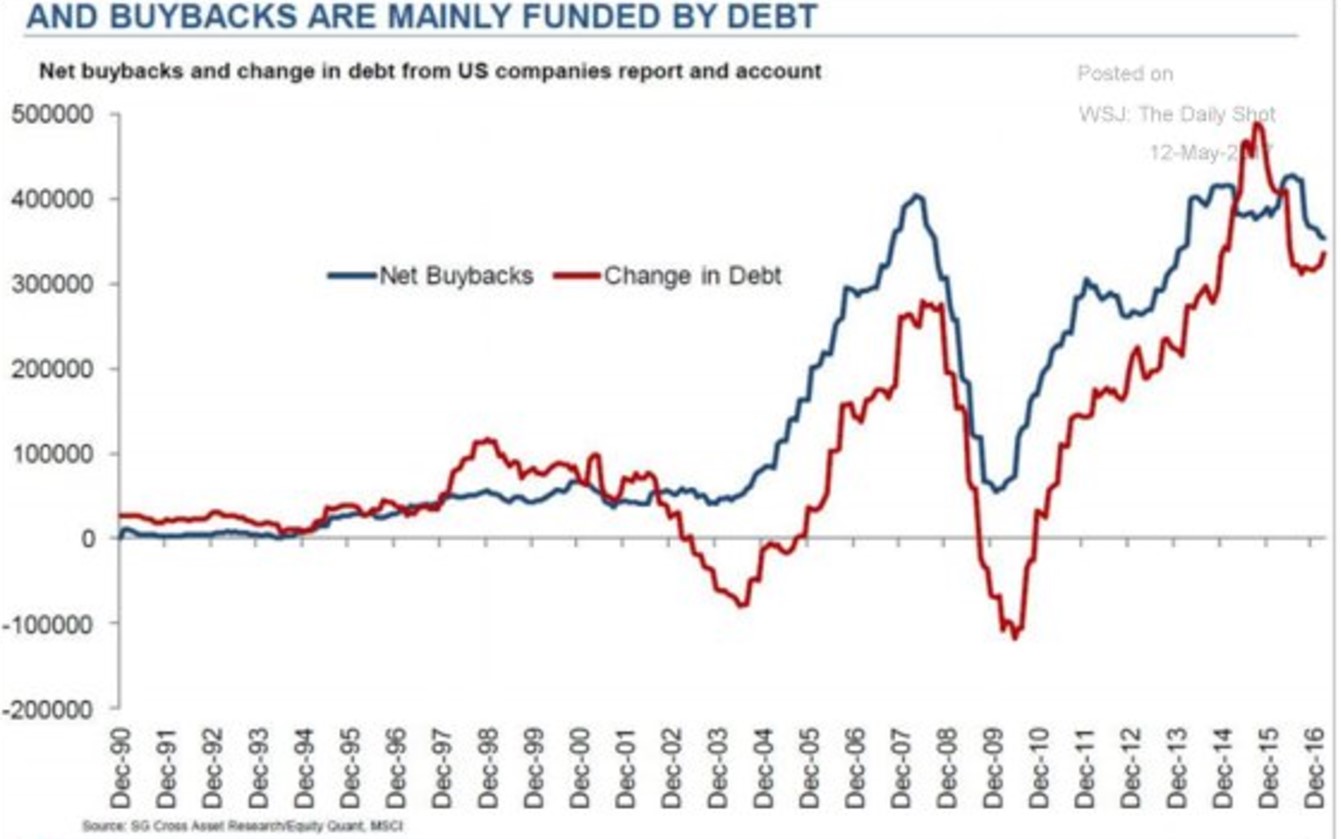 Stock buybacks are share purchases that a company makes of its own equity, using profits from business operations or through acquisition of debt. Share buybacks and dividends are the two ways firms return cash to shareholders. Share buybacks are more tax efficient because dividends are taxed immediately while buybacks aren’t. Buybacks shrink the amount of shares outstanding, pushing the price of each share higher. Investors can decide when to sell the stock. By delaying their sales and thus the capital gains taxes, investors pay less money in taxes due to the time value of money.

Interestingly, stock buybacks were illegal from 1934 to 1982 because they manipulate stock values. It’s amazing how viewpoints have changed since then with 4x leveraged ETFs having recently been allowed by the SEC. These surely manipulate stock prices more than buybacks can. Additionally, non-GAAP earnings reports use metrics which aren’t part of the generally accepted accounting principles are also becoming more prevalent. The point isn’t that buybacks should be illegal; it’s merely that more manipulation of stock prices is being allowed. Making buybacks illegal is illogical because it makes it illegal to gradually take the company private. The money should be allowed to be spent however the firm’s management think is the best way to maximize shareholder value.

The chart below shows the historic effect buybacks may have had on wealth inequality. 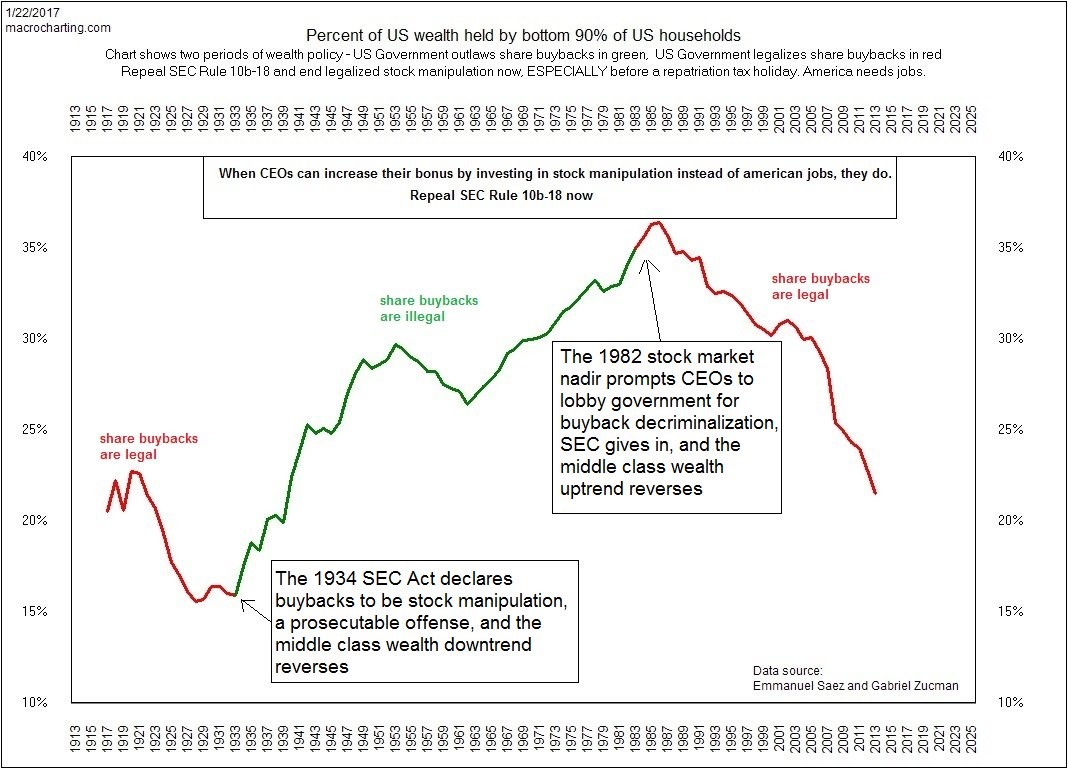 When buybacks were legalized, the wealth owned by the bottom 90% fell; when it was illegal to buy back stock, the wealth owned by the bottom 90% rose. It would be an extreme conclusion to believe that buybacks were the only cause of changes in wealth inequality because correlation doesn’t equal causation. However, the chart is food for thought on how buybacks may be affecting inequality and fueling a bubble in valuations.

While it’s debatable if buybacks should be illegal, what’s not debatable is that the money spent on buybacks is causing less money to be spent on capital expenditures (capex). This lack of capex spending is why worker productivity growth is declining. Poor worker productivity growth suppresses wage growth because if workers aren’t improving efficiency, then firms can’t pay them more. Furthermore, stock buybacks help boost management’s profits because it helps them meet earnings per share goals which increases their bonuses. Buybacks boost short term stock performance which is perfect for CEOs since the average CEO stays in that position for 7.4 years. Because some CEOs stay for many decades it skews the data. The median CEO only stays in that position for 6 years.

In the long-run capital expenditures could boost shareholder value more than buybacks, depending on how the money is spent, which is decided by management. By buying back stock instead of making tough decisions on where to invest the money, management shirks its main responsibility. Buybacks protect shareholders from dumb management who may waste the money on a bad acquisition, but they also stifle potentially disruptive innovation from being developed, placing the company at greater risk operationally.

The chart below shows a representation of where S&P 500 firms have deployed capital over the past 28 years. 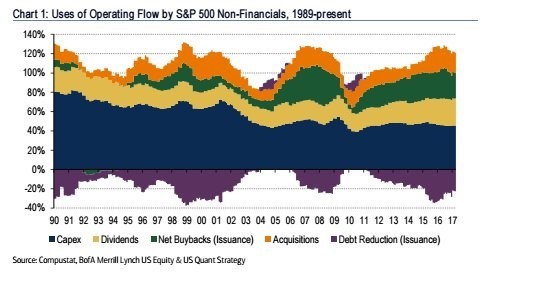 8 years after buybacks were legalized, the capex spending as percentage of operating cash flow was 80%. Now it’s close to 40% as the money has been swallowed up by buybacks and acquisitions. Acquisitions and buybacks aren’t good for the economy. Businesses buying up their competitors doesn’t provide innovation which helps grow GDP, lower costs, and improve quality of life for everyone. In fact it does the very opposite, creating largely oligopolies in the United States in many sectors – think utilities or technology sector. The capital expenditure investments in the 1990s are partially responsible for the internet boom in the late 1990s. Now the economy is stuck in prolonged low-growth because capex spending as percentage of cash flow has declined.

As you can see from the chart above and below, buybacks have helped create a boom bust economy. Firms are issuing excess debt to buy back stock, pushing the stock price artificially higher. This is terrible for the long term because when the stock falls, the investors realize the firm payed a premium for the equity, and has nothing to show for it in the form of improved business efficiency, equipment, nor innovation. All that money is simply gone, leaving behind debt and interest payments on a business that is less competitive than prior to when the buybacks first started. Stock should only be repurchased when it is below its intrinsic value. It is difficult for firms’ management to determine when their stock is cheap because they are biased. This is why some are calling for shareholders to be allowed to vote on share buybacks. Issuing debt to buy shares can be a disaster because sometimes to pay back the debt during recessions, firms issue new shares. This destroys shareholder value in the long-term. That’s the ultimate case of buying high and selling low.

At the end of business cycles, firms spend more money on buybacks and dividends than they have in cashflow as evidenced in the chart below. Buybacks can artificially boost stock prices to make it look like a struggling company is doing better than it is. This financial engineering was done by IBM which had declining revenues in the 2010s even while spending heaps of money on acquisitions. 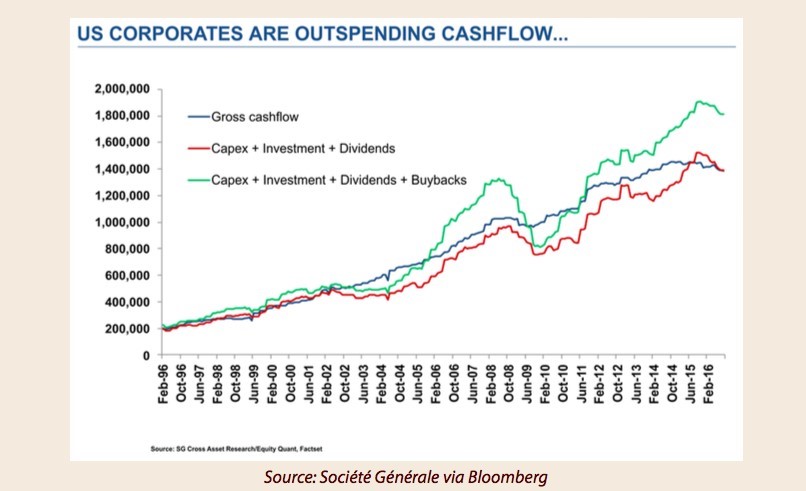 As was mentioned earlier, the goal of this article isn’t to call for buybacks to be made illegal. Buybacks can be used for good and evil. Wall Street needs to call for the responsible use of buybacks. Borrowing money to buy back stock should be frowned upon. When tech firms start paying dividends and buying back stock, it’s a sign they are becoming dinosaurs. Risk needs to be encouraged, to improve innovation. Sometimes the biggest risk management can take is not taking any risk and putting the money into buybacks. Management that boosts its stock price this way are hailed as geniuses, but they aren’t doing anything skillful. Investment in the business is always good, no matter the point in the business cycle because innovations can create long term efficiency gains.

Something which this article hasn’t discussed in detail, but is the reason that buybacks are possible are artificially reduced interest rates and central bank monetary policy attempting to prolong economic booms. In reality this also prolongs economic busts, since one doesn’t come without the other. You can read more about the business cycle here.

Low interest rates encourage issuing debt for buybacks, but management teams can still decide to invest in the business if they are pushed by shareholders. A great example of a success story is Amazon which took the money it made from retail sales and reinvested it into the business which led to the development of the immensely profitable cloud computing division called Amazon Web Services.