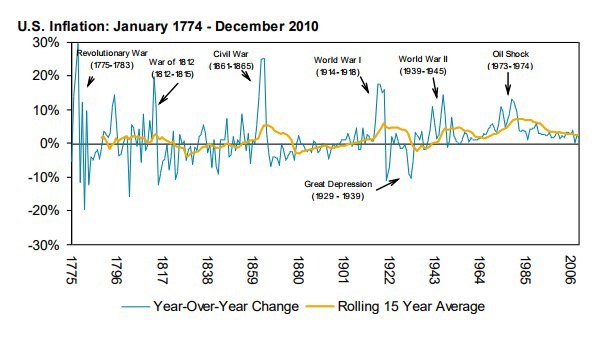 The Federal Reserve makes policy based on inflation, as measured by the CPI, since price stability is one of its mandates. The Fed has a goal of keeping inflation at 2% which usually means it wants higher inflation. Lately inflation, as measured by the CPI, has been subdued. The mistake the Fed makes is to equate growth and standard of living improvements with inflation increases. It’s arguable that price increases make the standard of living worse. Are you better or worse off when your weekly grocery bill is higher?

Inflation is affected by commodity prices, the labor market, the propensity of consumers to spend, monetary policy, and currency changes. One of the reasons why we’re seeing the decline in inflation, shown in the chart below, is because of declines in commodity prices. 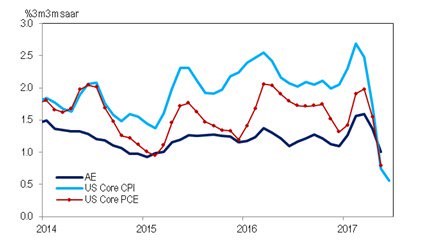 The Fed wants inflation to increase to justify its rate increases which suppress inflation. The Fed wants to normalize rates so it can cut them in the next recession. It has ignored the latest declines in inflation seen in the past few months as it’s betting on wage growth driving inflation even though the reverse has occurred.

So far, we have discussed near-term changes in inflation, but there are longer term trends at play which are causing inflation to remain lower than it has been for much of the 20th century. The chart below shows the inflation rate from 1774 to 2010.

Inflation Has Spiked Because Of War

The labels show what caused each increase in inflation. Many of the increases in inflation were caused by wars. In fact, the only bout of inflation not caused by a war was the oil shock in the 1970s, but which resulted from the removal of the dollar from the gold standard. Currently we’re in the reverse of an oil shock as American shale oil production is soaring, lowering oil prices and with it creating significant turmoil for OPEC’s dominance in the oil market. But shale oil may be in trouble, something we will detail in another article.

Besides the increase in American oil production another reason for the long-term disinflation is the lack of a major world war. The chart below shows the number of global deaths in wars since 1400. 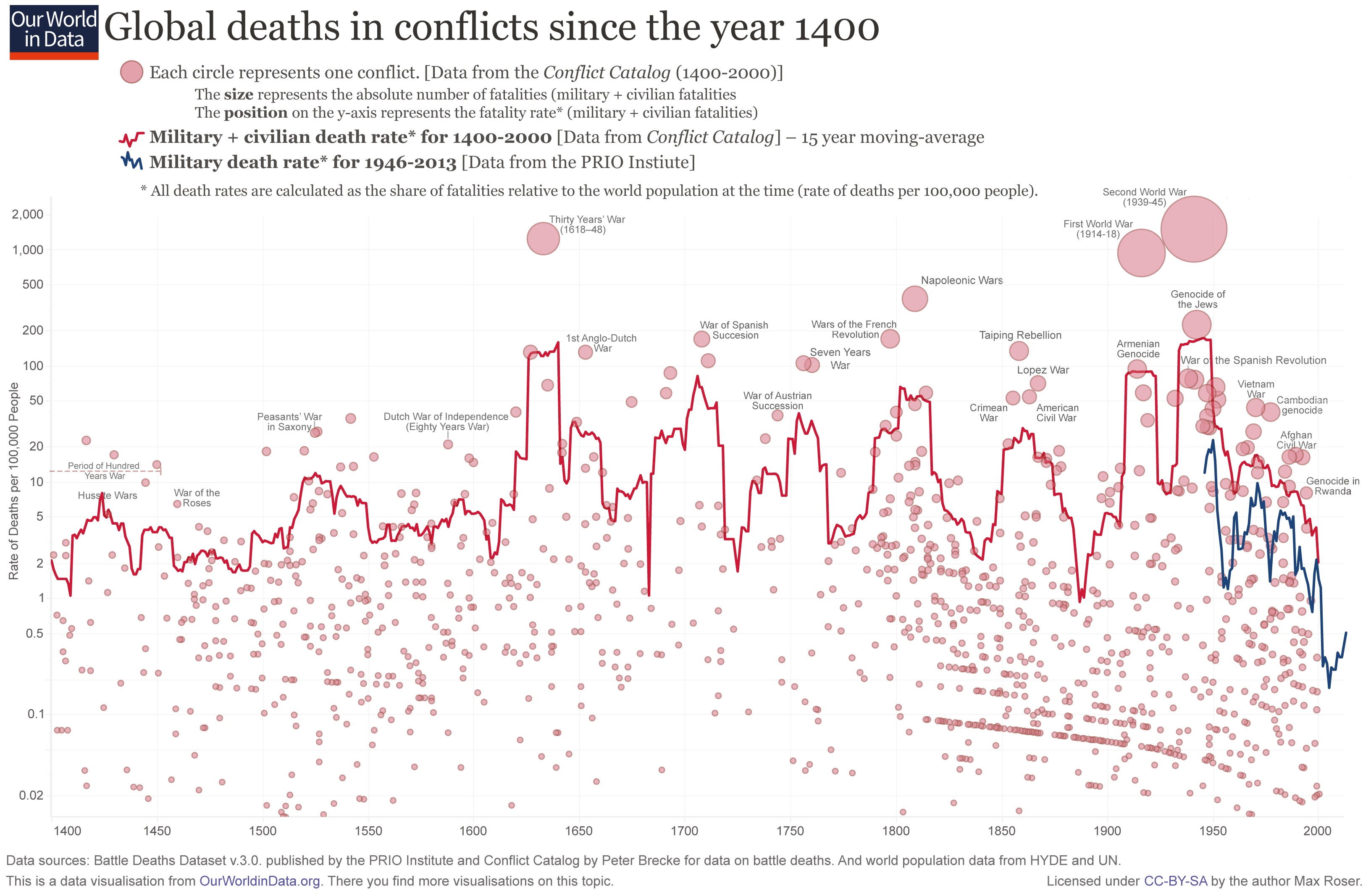 Global Death From War Since 1400

Now might be the most peaceful time in human history. This is a weird statistic to fathom. However, this is not to say that current ongoing conflicts around the world aren’t significant, they are. And it’s important to point out that thousands of innocent people die every year from these conflicts.

Another long-term trend that is suppressing inflation is the birth rate. The population growth in America is slowing as millennials are getting married later in their lives for a number of cultural and financial reasons. As we mentioned in a previous article, the average millennial starts having a positive net worth at 30. It’s almost impossible to afford a kid if you don’t have a positive net worth. There’s also a societal change which is causing this shift. Women are more focused on their careers, delaying childbirth, partly because a one income household is not sufficient to maintain a middle class standard of living. Children used to be more economically advantageous to parents at a younger age. Children 40 years ago were more likely to work at a younger age. Now children are spending more time in school. College costs makes having a kid more expensive. As you can see college costs effect both sides of the coin as they cause parents to have kids later and increase their budgets on each kid. According to a survey, millennials don’t consider themselves adults until they’re 30. This pushes child rearing back. Having kids later shrinks the biological window.

The chart below shows how the U.S birth rate is highly correlated with the core CPI. We can tell what will occur in the next 30 years because the indicator is pushed forward 30 years to reflect when the changes in births start affecting prices. The trend of a decreasing birthrate isn’t as positive as the peaceful trend. It means GDP growth will be more difficult to achieve given the aging population and decline in purchasing preferences. This becomes a major problem when the government is reliant on GDP growth to pay for the high debt. When politicians promise to cut spending, they are talking about cutting the rate of its growth. If the GDP growth is barely growing, or not at all, while entitlement spending increases because of the aging population, we will have a debt bomb where the government either inflates the currency or defaults on its obligation – in both cases reducing the purchasing power of the currency. 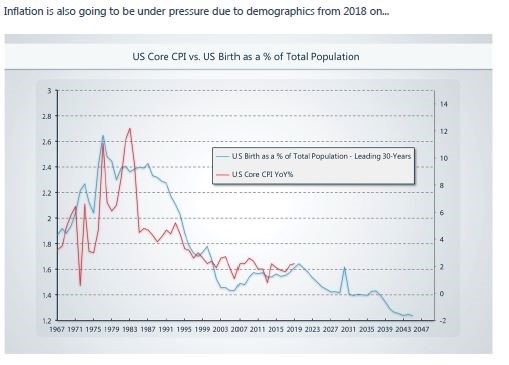 Speaking of debasing the currency, since the creation of the Federal Reserve in 1913, the global inflation rate has been more consistently positive than it has been in prior centuries. The chart below shows how higher, more consistent inflation is a 20th century phenomena. 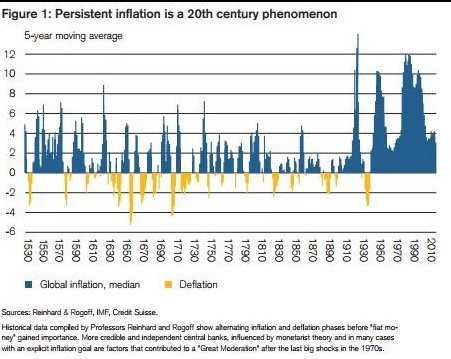 The Fed Has Caused Inflation To Be More Consistent

The 5-year moving average of median global inflation used to fall to negative all the time from 1530-1913. The economy has had deflation only once since the creation of the Fed. Inflation might be even lower than it is now if the Fed didn’t exist.

The Fed wants to increase inflation to 2% (an arbitrary number that it chose), but is having a tough time with that terrible goal despite the supposedly tight labor market and low unemployment (something we debunk here). The Fed is now fighting the long-term disinflation trend of less war and a lower population growth rate. Since its creation, there has only been one deflationary period. Even with the $4.5 trillion in quantitative easing and interest rates below the Taylor Rule, inflation hasn’t spiked. This will likely force the Fed to double down on its quantitative easing efforts in the next downturn in an effort to force inflation higher. Unfortunately, this will have an eroding effect on your savings and the purchasing power of your currency.