Should I Go To College? 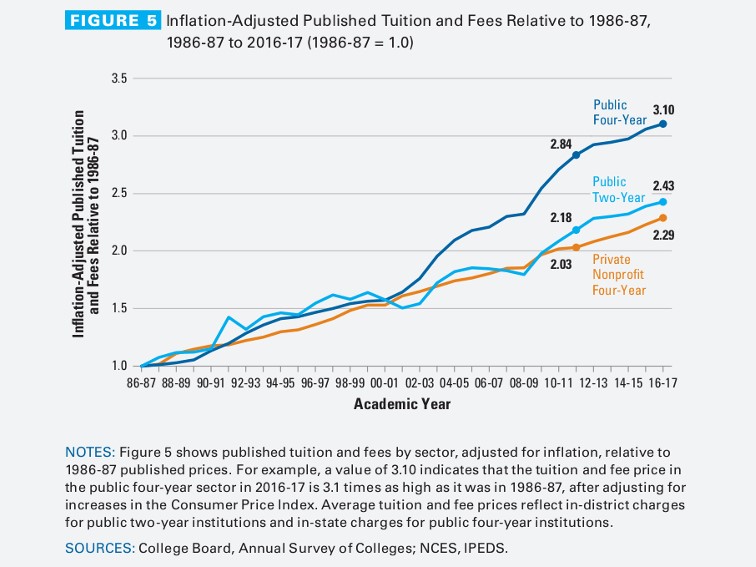 For decades the automatic response for the question of “should I go to college?” was a resounding yes. However, with education becoming so ubiquitous through the spreading of the internet, and the cost of going to college highest ever, the answer to that same question today is more nuanced. The question of whether college is worth the cost depends on many factors. To start, let’s examine why college is so expensive to begin with. Many students go to college not knowing what they want to do. Their goal is to figure it out as they go along. This would be a good strategy if college was a few thousand dollars, but it’s financially illogical to do so while going into tens of thousands of dollars into debt.

Should I Go To College? Costs Examined…

As you can see from the chart below, 4-year public college tuition and fees have increased 3.1 times the price they were in 1986, adjusting for inflation.

The cost of college has increased exponentially

The reason costs have gone up is government intervention. Firstly, legislative spending on higher education has gone up 10-fold since 1960. More spending doesn’t solve the problem. Politicians use a moral argument when they claim that the government must invest in education to help the next generation. Pulling at one’s heartstrings is a great argumentative tactic, but it doesn’t make college more affordable or better. Since 1993 to 2009, the number of administrative positions at colleges went up 60% which is ten times the growth rate of tenured professors. Does creating a college bureaucracy sound like a good way to help students? It sounds like a government institution where many people are employed who don’t help students learn.

The elephant in the room for college costs going up is the federally funded student loans which are given out. It has become a government policy that college is the best way for almost all kids to live a successful life, so the government decided to subsidize this expense through low interest loans and grants. The problem with government spending on a good is once it starts, it can’t stop. Even if the government started with giving out small loans and grants, that causes the price to go up which makes the government pour more money in. This self-fulfilling cycle is what has led to the chart below. Student loans wasn’t even broken down into a separate category before 2006 and now the student loan debt market is $1.4 trillion.

The statistic that students who go to college make $1 million over their lifetime more than those who don’t is incorrectly interpreted. On that logic, going to college will be worth it if it cost $900,000 in total. That’s the wrong way to look at it because having a lot of debt at a young age can significantly set you back financially and destroy your opportunity cost. For many it can destroy their lives. It can delay your purchase of a house and ability to start a family. Not to mention the stress associated with carrying student loans for decades.

Statistically, that metric is an example of why averages are often worthless. Whether college is worth it depends on what degree you get. Before reviewing which degrees are worth it, let’s acknowledge that since most motivated, intelligent people go to college, it skews the results. If you took a bunch of Ivy league caliber students and put them to work at a startup firm, they would likely thrive. That’s what the Theil Fellowship aims to prove as it pays kids $100,000 to not go to college and instead work on entrepreneurial ventures.

Which College Should I Go To?

As was mentioned, what degree you pursue determines whether college is a good investment. The chart below shows the rate of return on various degrees. 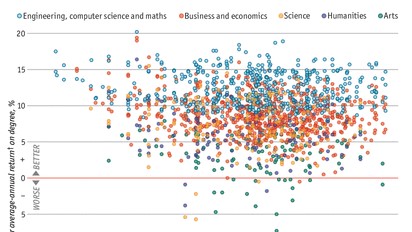 Math, science, engineering, and business do well, while the arts do poorly. The government always talks about pushing people into STEM fields yet it gives out loans to each degree equally despite the poor results of some. This isn’t an argument for more government intervention. If the free market were to give out loans, it would do this type of analysis to determine who to give out loans to. The arts wouldn’t disappear; instead the cost of those degrees would rise, as it would be riskier for banks to make these loans knowing the potential payoff for the student is less than other degrees provide.

I Don’t Know What To Major In

Engineering and computer science majors have a 20-year annualized return of 12%; business and economics earn an 8.7% return, while the arts sometimes offer negative returns. This doesn’t mean you shouldn’t study the arts if you’re interested in it, but it does mean you shouldn’t go to college for it. If you think about it, going into debt can hurt your art career because when you graduate, you may have to work as a cashier to pay off the loans instead of doing what you love. Money equals time; debt steals your time.

As you can see from the chart below, what you study matters more than where you study it in terms of earnings. 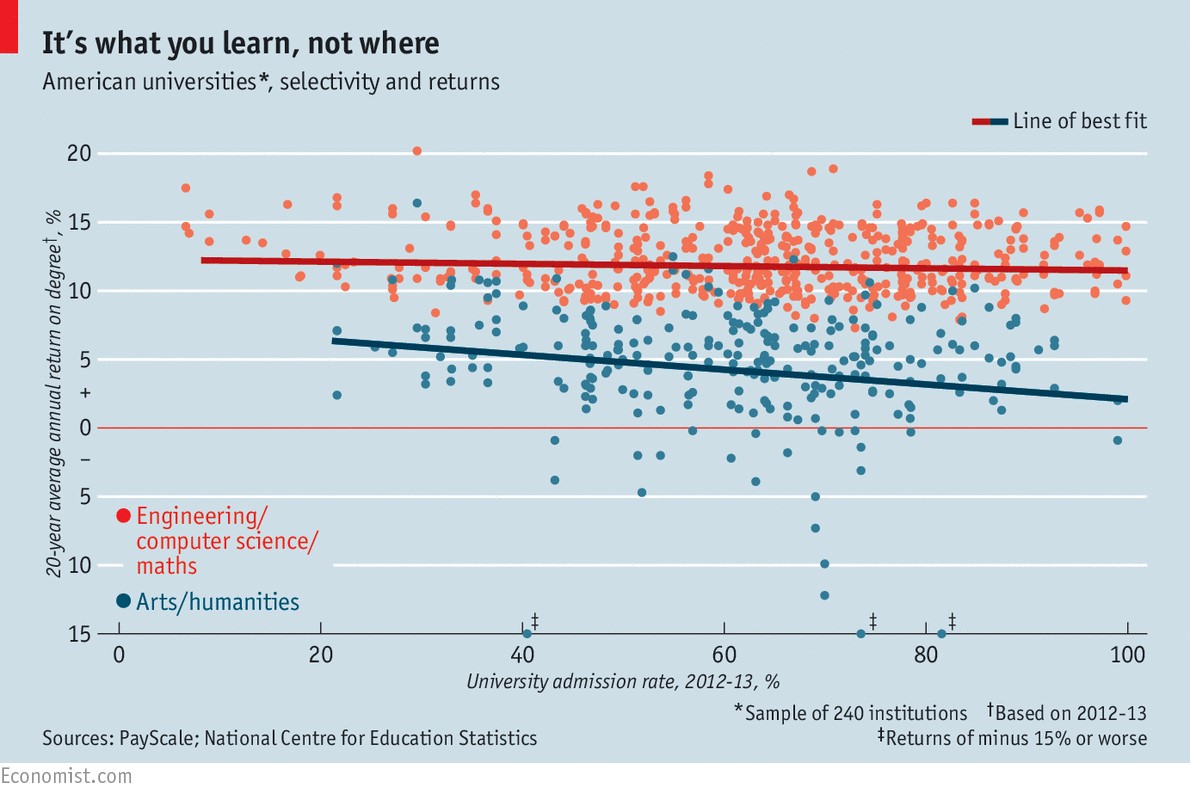 What you study is more important than where you study

It’s not a perfect logical conclusion to say that a college’s selectivity determines how good it is, but that’s the only mathematical standard there is. The conclusion to make from this chart is that if it costs much less to go to a lesser known school, it is beneficial to go with the cheaper option because employers aren’t necessarily going to care what school you went to to earn a degree. Often what matters most is that you put in the tenacity to earn the degree in the first place. Some employers will only hire Ivy graduates, but that’s for jobs which have an overwhelming number of applicants, so the employer must narrow down the candidates.

The takeaway from this article is that if you don’t know what you want to do for a career, there’s no reason to go to college and pile up large debts. As you can see from the chart below, the average cost of tuition and fees is above $30,000 per year. Would you buy a car if you didn’t know if you were going to need it? 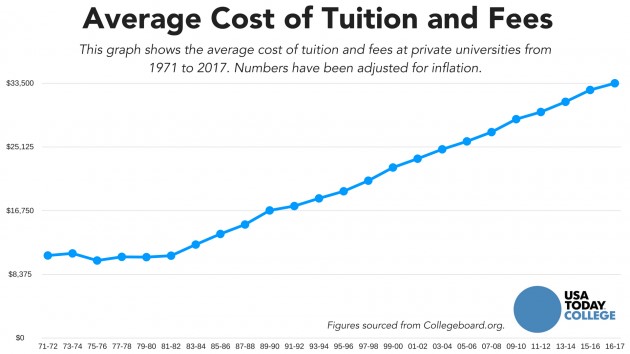 College front loads all your learning, which is illogical because the learning that takes place on the job on a daily basis, brings more value and knowledge than what you learn in a classroom. If you can get a job in your field without going to college first, it could be worth going with that. Through compounding interest, saving money early in life is important for your retirement. Starting out $30,000 in the hole, prevents savings which hurts your long run success.

Still not sure? Here is an article examining the majors that pay off the most for those with student loans.