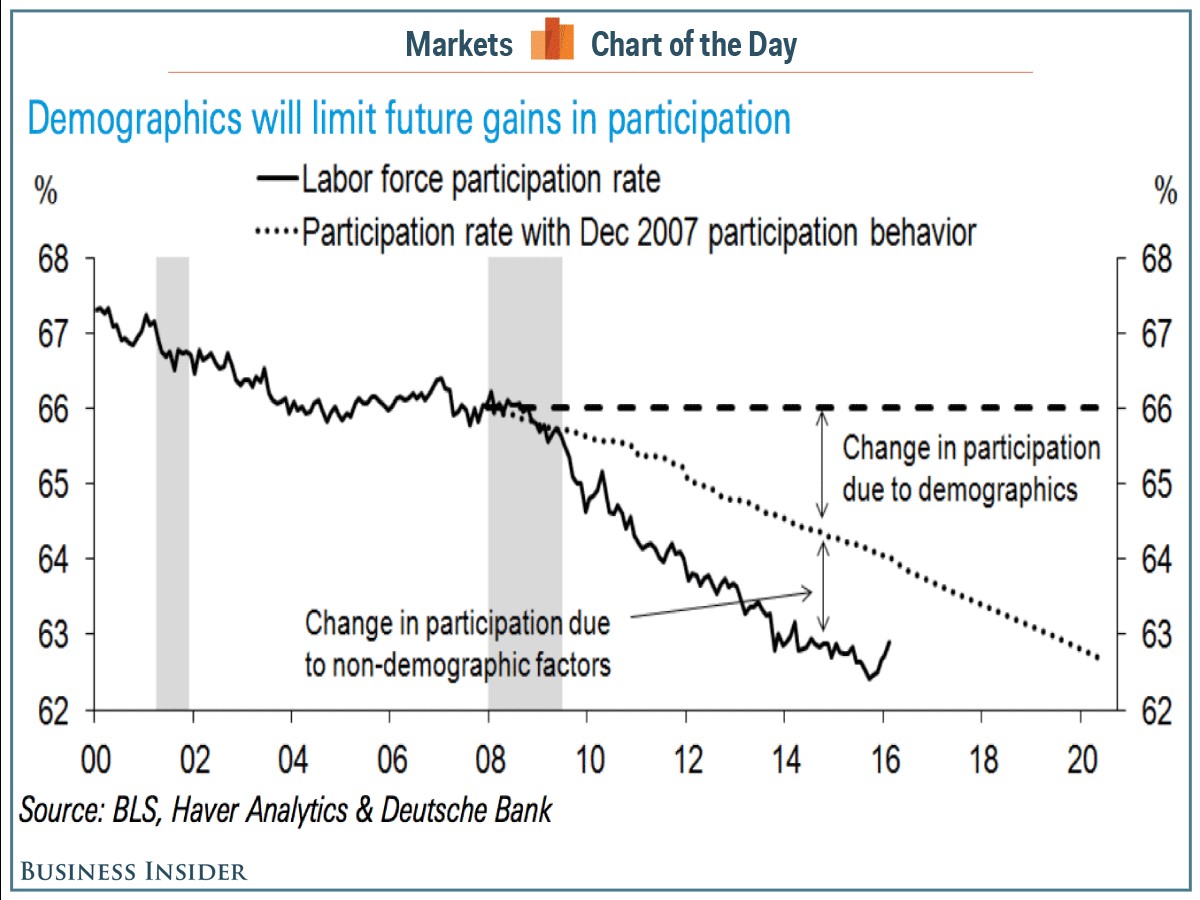 The labor market is one of the most important factors which drives the economy because about two thirds of the economy is driven by consumption. Consumers can’t buy goods and services if they aren’t getting a raise or they don’t have a job at all. The labor market is tough to analyze currently by looking at conventional metrics. Face value analysis usually doesn’t get you far and this situation is no different. The face value stats are the unemployment rate is 4.5%, which is near where it has fallen to in previous cycles before the stress cycle starts, the number of jobless claims compared to the size of the labor market is showing the tightest labor market ever, and hourly earnings growth has been stagnant.

Recessions are a terrible time for workers as there aren’t many jobs and the pay is low. Peaks in the labor market have the exact reverse scenario as jobs are plentiful and pay is high. This nirvana is possible because businesses usually overproduce at the end of a business cycle. At this point in the cycle where optimism is plentiful, the belief is that the economy will continue growing. Excess production can cause excess supply that is not met by demand, thus forcing companies to lower price and production, thus hurting growth.

The mystery can be seen in the chart below as some economists claim the labor market is at full employment, yet the nonsupervisory & production hourly earnings growth has been weak. 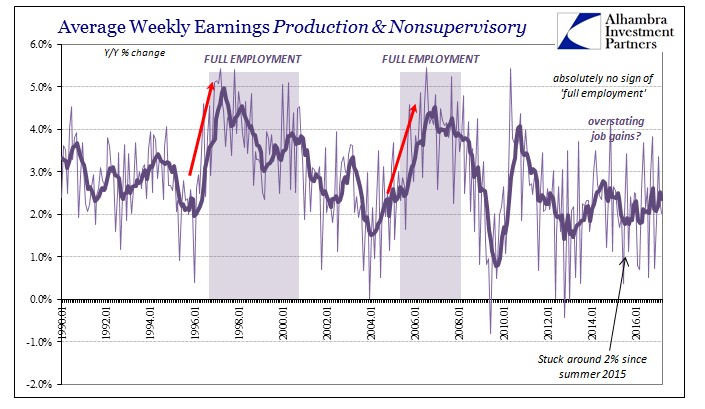 Top management may be getting more stock options than ever as stock prices soar, but the average worker is getting crushed as the nirvana of pay increases isn’t here.

You may look at the growth in wages and think saying the workers are ‘getting killed’ is an over-exaggeration. It is not an extreme statement because wages aren’t increasing at the rate primary residence expenses are rising. Every pay raise is a pay cut in disguise. Low interest rates have pushed up bonds, stocks and real estate. Real estate price increases cause rents to be hiked. If you buy a building for a higher price than five years prior, you must raise the cost of rent to make up for the added cost. This is why cost of rent increases alongside real estate valuation, as does insurance and taxes.

The orange line in the chart below shows rent costs and the blue line is earnings growth. 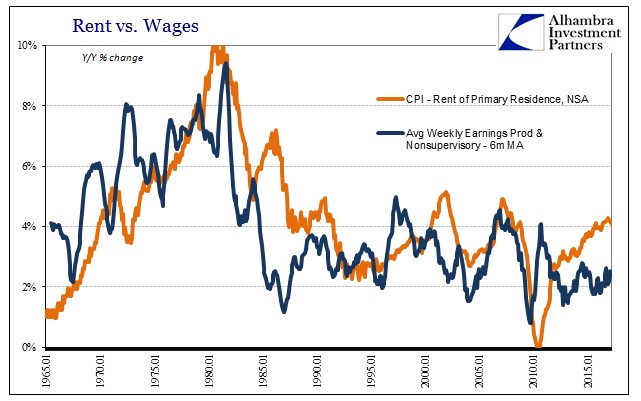 Rent costs have been rising faster than earnings since quantitative easing began in 2008. This also happened in the late 1970s and mid-1980s.

The baby boom generation retiring has something to do with the change. The dotted line shows the demographic causes of the declining labor force participation rate. As you can see, the remnants of the recession have suppressed the labor force participation rate by about 1%. That’s the extra unemployed individuals not showed in the other statistics.

Despite the growth in college educated individuals in the United States, as we have detailed earlier, productivity continues to fall. 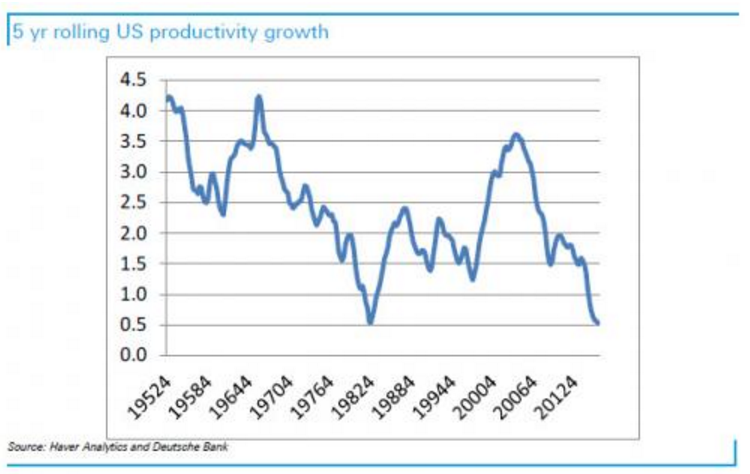 While the share of low income earners who also have a Bachelors degree continues to rise: 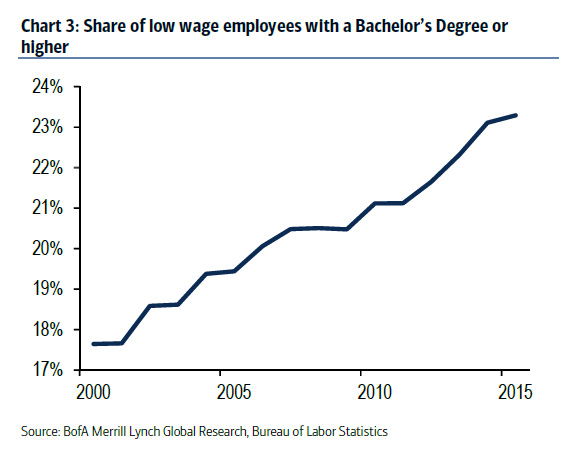 Because earnings are not rising alongside the cost of living, this is indicating that in fact the unemployment rate of 4.5% is inaccurate. Had there been in reality such a small number of unemployed, there would be increases in wages. However, because this is not happening, this indicates that the economic problems are structural in nature and have not been addressed with the Fed’s quantitative easing program of the past 8 years. Additionally, companies continue to hire more part-time workers than full-time workers since there are a number of new regulations and tax increases that were introduced as part of the Affordable Care Act that increase the employer costs of having full-time employees. Unless structural changes are made to the economy to boost growth, there is no impending catalysts that would magically increase wages or the labor force participation rate.