U.S. Shale vs. OPEC Oil Price War: Who Will Win? 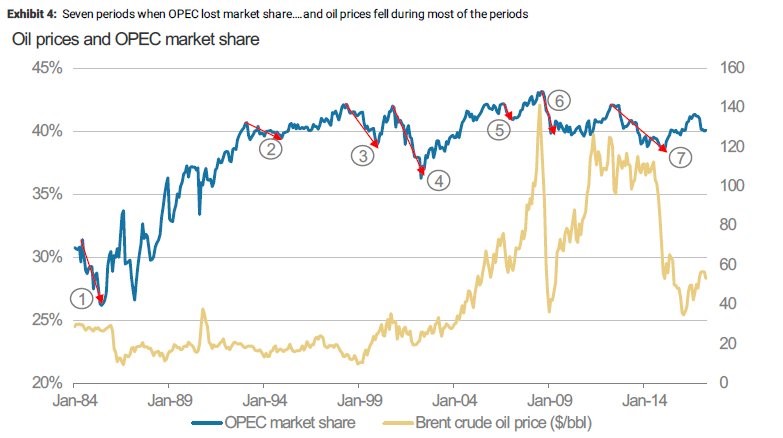 One of the biggest geopolitical struggles is over the price of oil. Unlike other economic wars like the global currency war where countries try to devalue their own currency to boost exports, the oil price war is between governments and private corporations. It is between the OPEC oil cartel and private businesses in America which are utilizing the relatively new technology of fracking oil and gas shales. OPEC and non-OPEC nations like Russia had been operating in the environment where they controlled prices because there was no viable competitor outside of governments. This allowed them to maintain high prices and high market share. This changed with the advent of fracking. At first it was thought that American frackers would be the swing producers who would only be a factor when oil prices were high. However, this is proving to be wrong in the past few years as frackers have rebounded quickly after the crash in oil prices in 2014-2015. They’re back to producing gobs of oil. This is a game changer which has geopolitical consequences and could suppress oil prices in the long term.

The chart below shows the two things OPEC cares about: price and market share.

As you can see, the excess production by American frackers in 2014 caused OPEC to lose market share and caused oil to crash. After oil prices crashed, OPEC didn’t immediately cut production because it wanted to wash out frackers. With fracking being expanded with oil above $100, it became tough for frackers with high breakeven costs to stay in business. A breakeven cost is the price per barrel firms need to start making a profit on sales. As you can see, soon after oil prices fell OPEC regained some of the market share it lost. Obviously, OPEC would have preferred oil prices to have never fallen, but it wasn’t a big deal for these countries to deal with low oil prices temporarily as they dealt with low prices in 2009 because of the collapse in demand due to the financial crisis. OPEC thought it was mostly done with the glut shale producers provided, but that didn’t end up being true.

U.S. shale production was able to quickly rebound after the crash in 2014-2015 because oil prices rebounded from the $20s and shale producers lowered their breakeven costs. As you can see, the year over year growth in drilling rigs rebounded sharply making it fair to call this part two of the fracking boom. 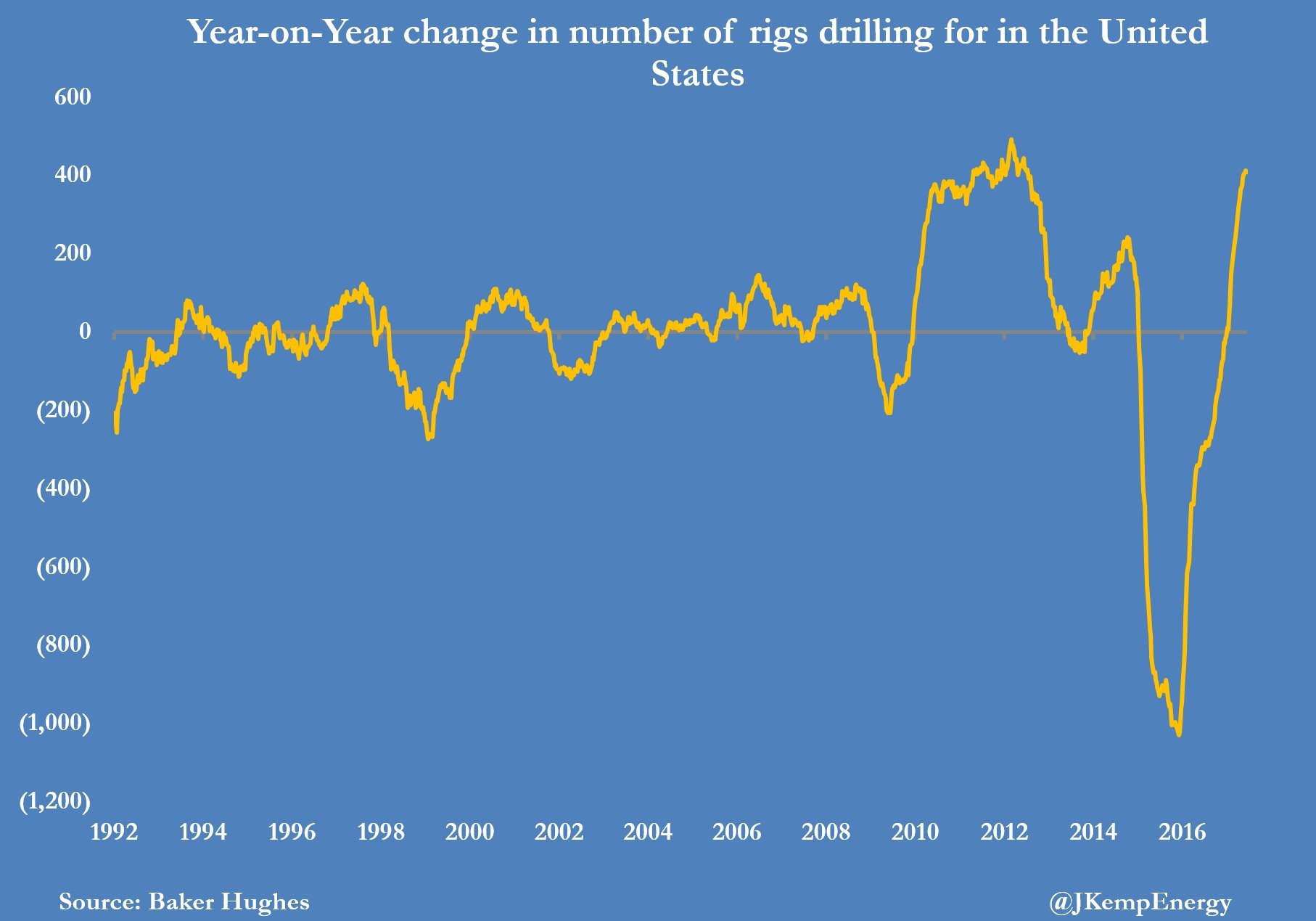 The Rig Count Has Rebounded Since 2016

The rig count doesn’t do a perfect job of explaining the total oil produced since the amount of oil rigs produce changes over time. For information on the U.S. oil production, see the chart below.

U.S. Crude Oil Production Has Rebounded To Near The 2014 Peak

It shows oil production has almost reached the peak in 2014 even though oil is about half of the price it was at in 2014. One of the reasons for this production is wells which were drilled, but uncompleted started being completed after oil prices rose. There is also high grading which is when frackers only drill the wells which have the lowest breakeven costs.

Finally, after witnessing the resurgence of American crude oil production, OPEC decided keeping prices high and eliminating the global oversupply was more important than maintaining market share so it implemented a coordinated round of production cuts in November of 2016. This was the first OPEC cut in 8 years. In May 2017, OPEC along with non-OPEC nations such as Russia implemented cuts that will last until March 2018. Because of OPEC’s cuts, U.S. shale and non-OPEC countries are expected to capture all the growth in global demand in 2018. The lower 48-states are expected to grow production by 340,000 barrels per day in 2017 and by 500,000 barrels per day in 2018.

OPEC won the first round in this battle as many fracking firms went bankrupt. The fracking firms won the second round as OPEC cut production and didn’t see much of a price boost. Now we’re in the third round. Even with the OPEC cuts in production, the price of oil is falling because of the increase in American production. The question is which side will blink as oil prices fall. Either countries who have committed to the OPEC cuts will cheat on the cuts because they can’t survive with oil so low and market share dwindling or fracking firms will start to cut production. If OPEC ends the cuts in March 2018, Saudi Arabia, which is the leader of the group, will be losing precious market share and will see prices decline. Saudi Arabia is expected to run a budget deficit of 7.7% of GDP in 2017. In order for Saudi Arabia to breakeven on its budget it needs oil to be $84 in 2017 and $77 in 2018.

Even though shale has been able to cut costs since 2014, the breakeven rates haven’t fallen enough to keep production going in the mid to low $40s. According to a survey done in March 2017, which you can see in the chart below, most new wells have a breakeven rate in between $46 and $55. 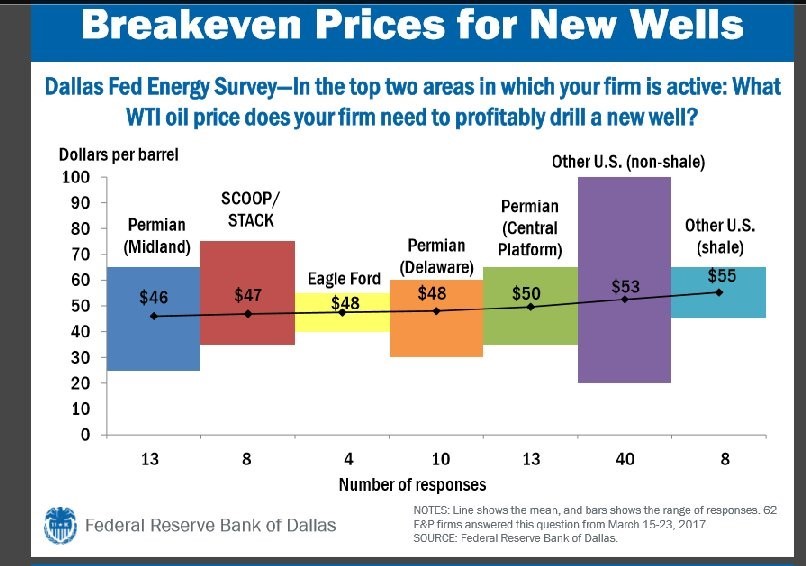 Current Oil Price Is Below Breakeven Prices For New Wells

Frackers will be feeling the brunt of the decline in oil. There likely won’t be the same number of bankruptcies as in 2015 and 2016 because the weak firms are gone. However, the credit default swaps are signaling stress in the industry.

The ability for OPEC to have none of the countries cheat on the production cuts is largely dependent on politics as countries can decide to cut government spending to maintain the production cuts. It’s still easily profitable for the gulf states to produce oil even in the $30s. It’s simply a matter of whether governments can handle the lowered revenues without their citizens complaining.

The chart below shows that frackers operate purely on what is good for their bottom line. They will cut drilling activity when oil falls and raise it when oil rises. There is a lag time between these decisions. The lag was 16 weeks after the crash in 2014 and it was 19 weeks after the rally in 2016. The price of oil peaked in February, so production cuts may be coming in the next few weeks. 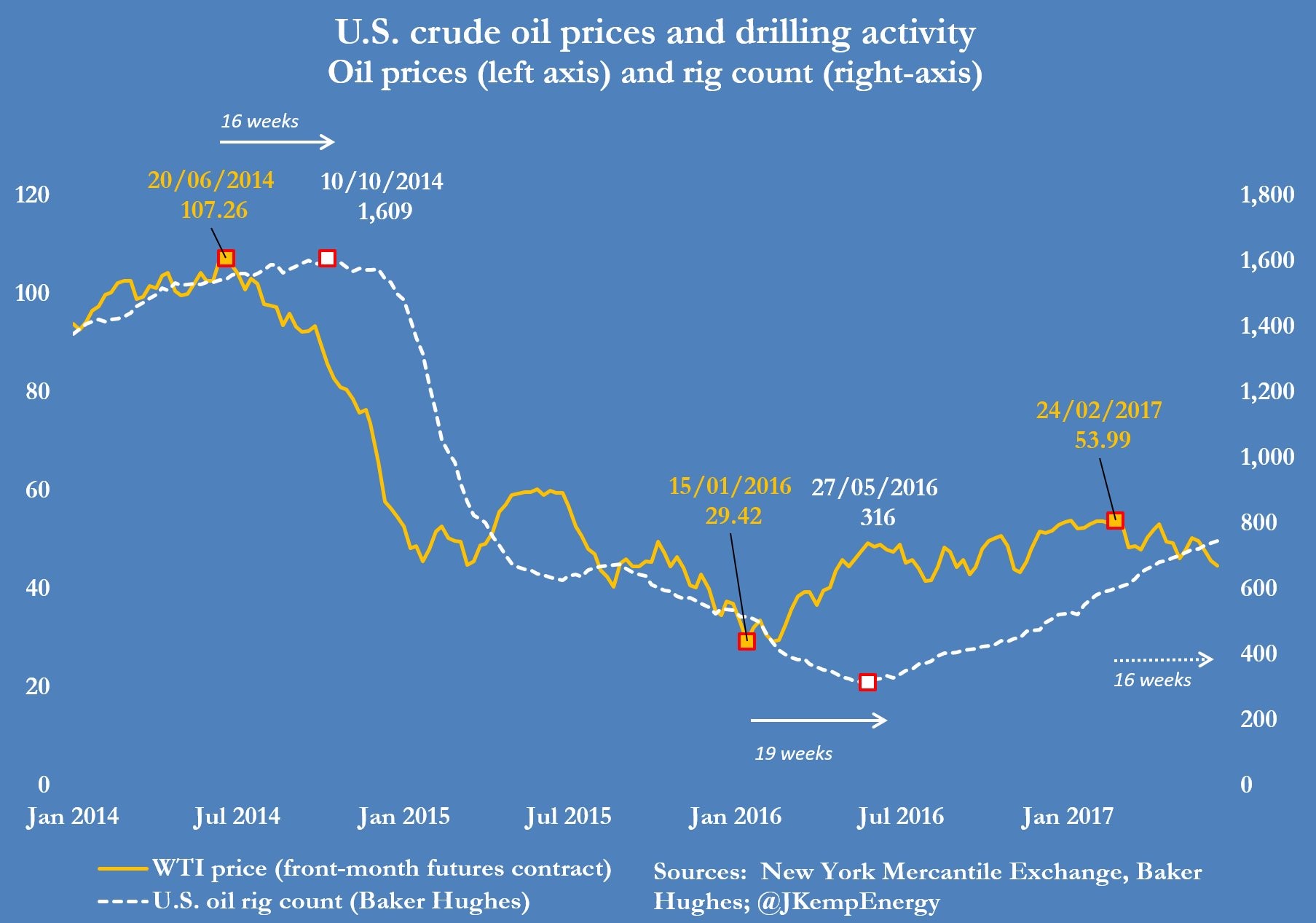 It’s a testament to the ingenuity of American E&P firms that they got costs down to compete with OPEC as frackers had breakeven costs in the $60 range in 2014. Ten years ago, horizontal drilling the way it’s done today was unthinkable. In terms of winners and losers in this battle, the E&P firms with the lowest breakevens will do the best. OPEC is a big loser in this battle anyway you look at it because the countries no longer control the oil market nor the fracking technology necessary to replicate the success of American firms. The one caveat to this situation is interest rates. If interest rates rise, it could increase the frackers breakeven costs as many firms issue junk debt to drill new wells.