How Will Markets React To Central Bank Tapering In 2018? 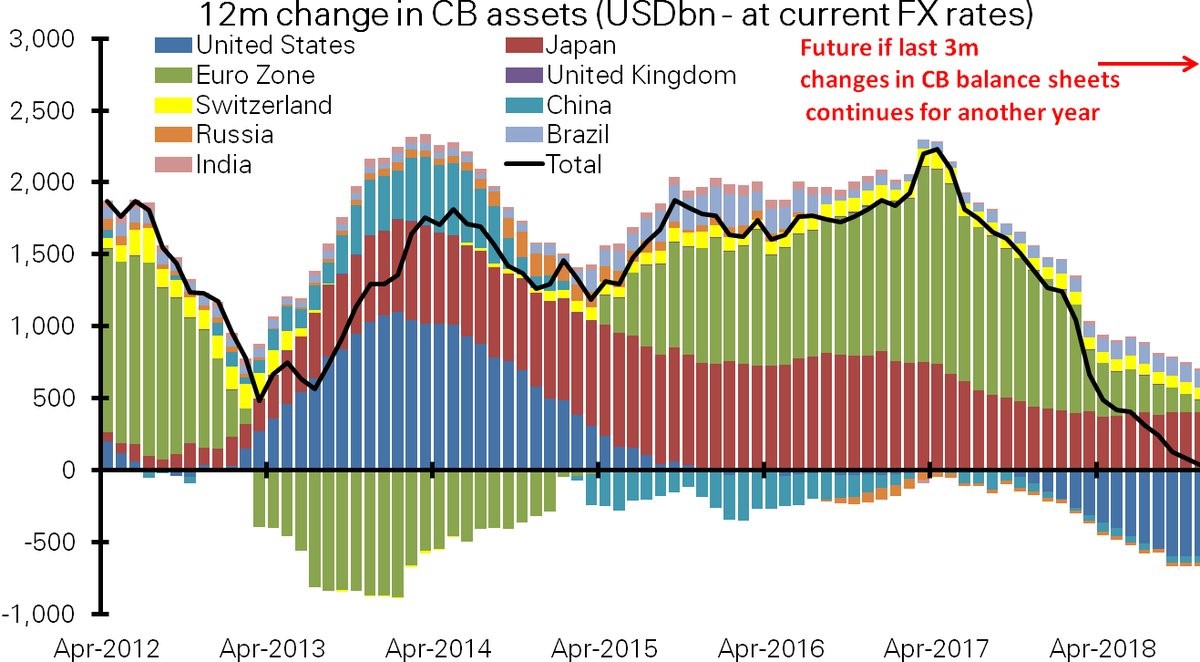 2018 is expected to be the year of tighter central bank policies through shrinking balance sheets and rate hikes. It’s going to be interesting to see how central bank policies affect equity markets and the economy. The Fed’s QE policy is monetary stimulus, but most critics claim it just pumps up the stock market. When stocks began to rally after the Fed stopped its QE 3 program, critics moved to the global central bank bond buying. The chart below shows the historical central bank asset buying along with the expected policy in the next 12 months.

As you can see, the Fed’s unwind and the ECB’s taper which will cut its bond buying to 30 billion euros per month in January 2018 and end it by the Q4 2018 are the key drivers of the decline in the black line which represents the net change. The net change is expected to go to negative in 2019. The growth rate in 2018 will be the lowest since the financial crisis started, making it a big change in monetary policy which can affect asset prices.

First, let’s look at the expected Fed policy on interest rates. With the U.S. economy growing faster than its potential, eliminating the output gap, and the unemployment rate getting to the point where there’s typically accelerated wage growth, especially when comparing the U6 unemployment rate to the U3 unemployment rate, we’re at the point in the business cycle where inflation accelerates. The chart below shows a few measures of inflation such as the core CPI, core PCE, and the core sticky CPI which show signs they are turning around. If inflation stays on this upward trend, the Fed will raise rates quickly in 2018. That could tighten financial conditions and pressure equities. 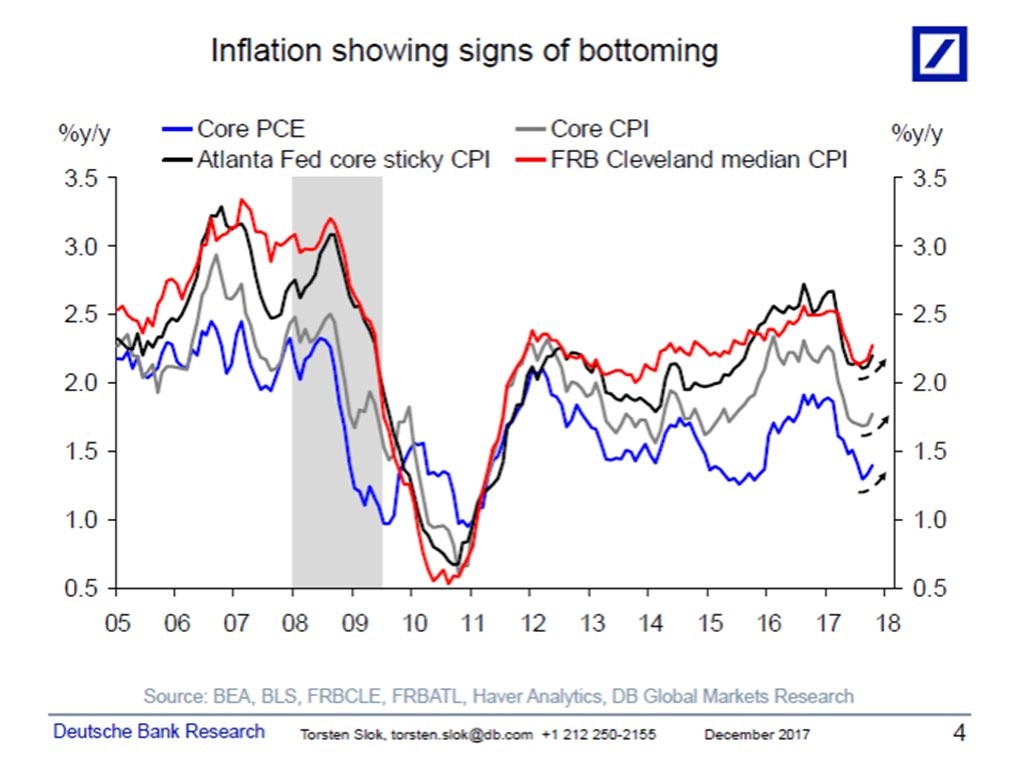 Inflation Set To Move Higher In 2018

The Fed raised rates 3 times in 2017, making the total rate hikes this cycle 5 or 125 basis points. The chart below shows the historical 10 year Treasury bond yield along with the Fed funds rate. As you can see, they have both been in a downtrend for decades. 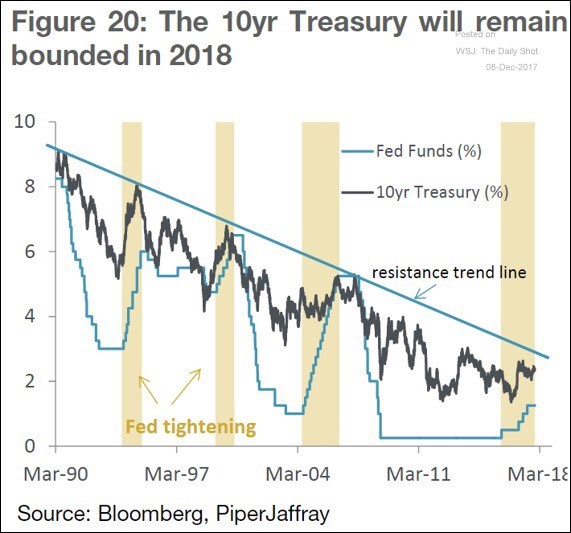 10 Year Bond Yield & Fed Funds Rate Are In A Downtrend

It’s wrong to exclusively blame the Fed for declining bond yields since the market plays a role in pricing long bond yields. Some argue the Fed is just following where the market is headed. In terms of length of time this hike cycle has lasted, it’s one of the longest even though the Fed hasn’t raised rates much. The limit of the hike cycle will depend on inflation and the timing of the next recession. The Fed’s long run dot plot has rates getting to 2.75%. The market expects the Fed to raise rates 2-3 times in 2018, getting it close to the long run Fed funds rate.

The Fed won’t be alone in raising rates in 2018. The chart below shows the historical developed market average short term interest rate set by the central banks. 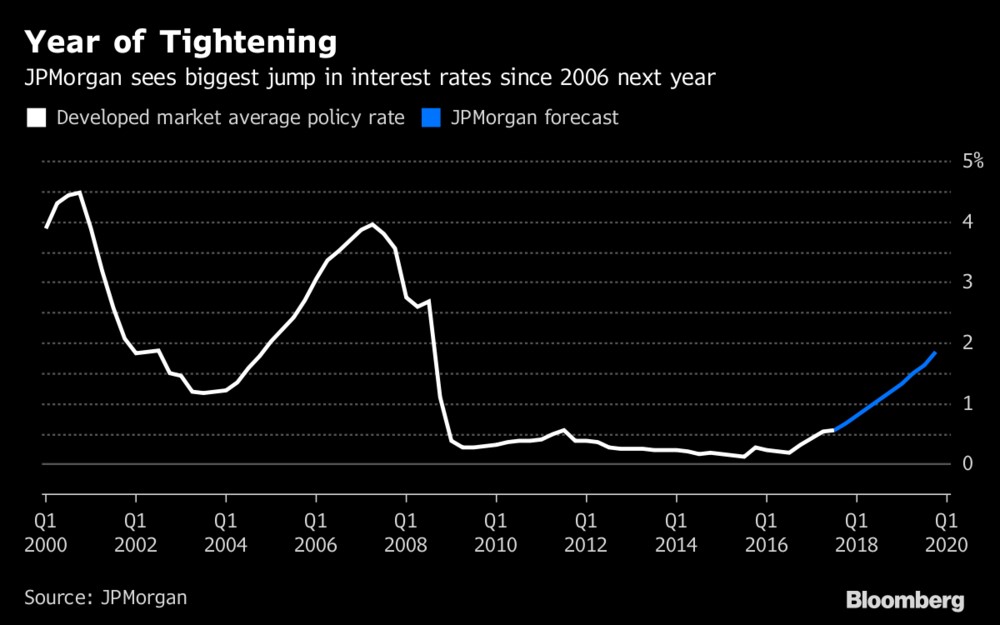 The end of the line shows JP Morgan’s prediction for the future average rate. As you can see, the average is expected to accelerate like how rates were hiked in 2004. If the trend towards lower rates holds, the domestic central banks will be close to their limit in early 2020. If inflation doesn’t meet expectations, this forecast by JP Morgan could be overzealous. If it’s accurate, expect increased volatility in stocks in 2018.

Bank Of Japan Has Been Buying ETFs

The BOJ policy is the most interesting, and you can say radical, out of the 3 major central banks because the Fed and the ECB have clear guidance for 2018, while the JCB doesn’t. The most discussed part of the BOJ’s QE is its ETF buying. It buys shares in the Topix and Nikkei 225 ETF. This could be dangerous because getting out of this policy could cause a panic as the selling pressure mounts. Adding to this potential issue, the BOJ owning stocks creates a moral hazard where companies no longer need to meet financial targets to see their stock prices increase. We covered this in our article: “How To Nationalize Economies Without Voting“. The BOJ doesn’t buy stocks based on whether they perform; the BOJ buys stocks based on their weighting in the two indexes it owns. Because the Nikkei 225 is price weighted, the BOJ owns a large percentage in some stocks such as Fast Retailing which it owned 13% of as of March 2017. The BOJ owned 74% of the ETF market as of October 2017. One of the points which rarely gets mentioned in articles about the BOJ because writers like to make everything look as sensational as possible is that the BOJ is only buying about $54 billion in ETFs per year. That is small in comparison to the 30 billion euros per month for the first 9 months of the year that the ECB will be buying in 2018. The BOJ holds about 2.5% of the Japanese stock market. Officials are getting worried it will start affecting stocks and shrinking volatility which is why this policy might end soon. 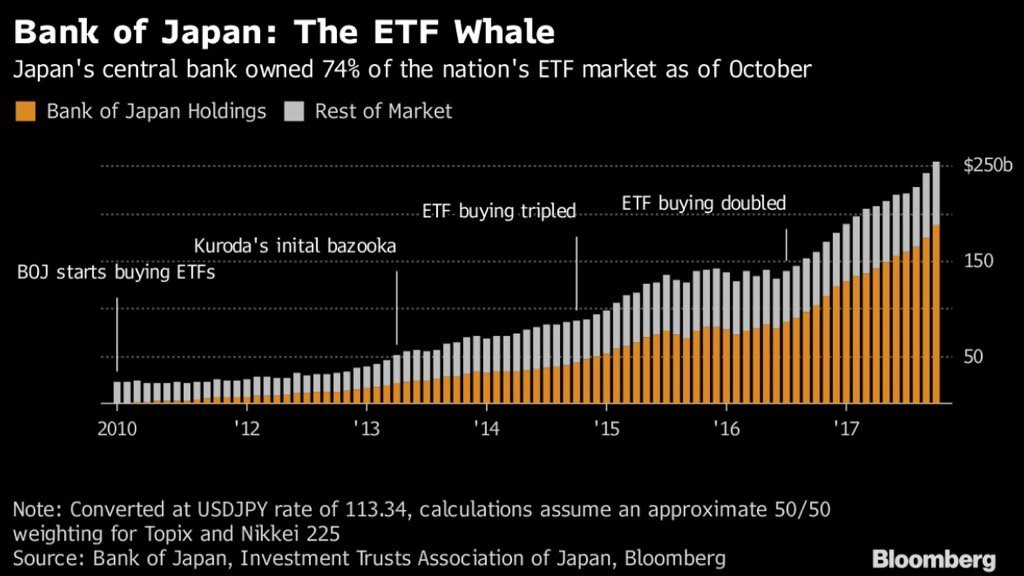 Swiss National Bank Might Pull Back On U.S. Stock Buying

As we’ve discussed previously, the Swiss National Bank buys U.S. equities. It owned $88 billion in U.S. stocks as of the Q3 2017 report. The SNB tries to buy U.S. stocks to weaken its currency. The chart below shows the headline and core inflation in Switzerland accelerating. That could mean the SNB will taper its U.S. equity buying. 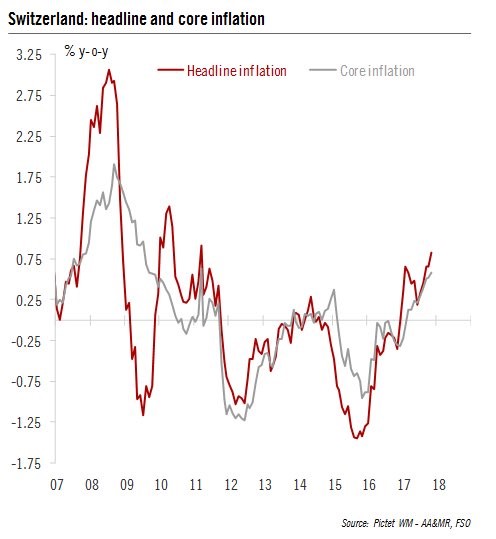 Swiss Inflation Is Heating Up

As you can see, the theme of 2018 is central banks tapering their stimulative programs and raising rates as inflation is set to rise and the business cycle comes close to ending. As we mentioned in a previous article, it’s estimated that 1,000 global central bank rate hikes are needed to reverse the easy policies of the past decade. It’s interesting to see what the unwind of the bond and stock buying along with the rate hikes in 2018 will do to equity prices and the economy. We will cover the impact in future articles in 2018.