Hawkish Fed Could Force Another Recession in 2019 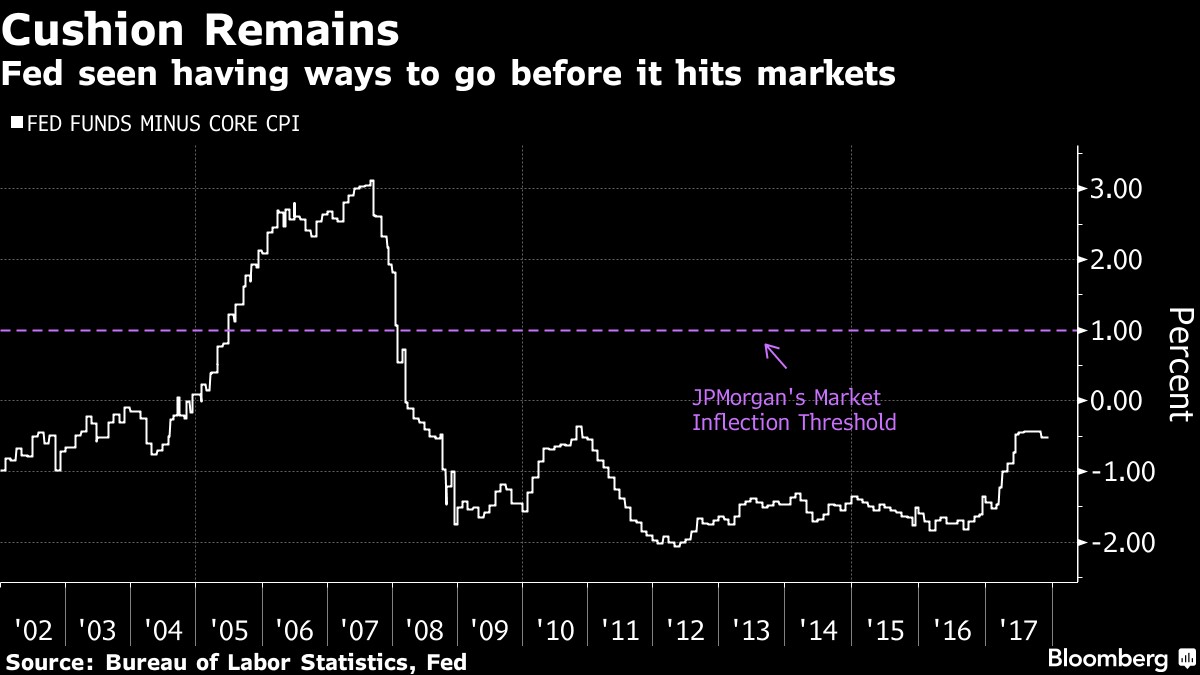 As we’ve discussed in previous articles, the wage growth for production & non-supervisory workers isn’t where it should be according to some metrics. The chart below illustrates this point perfectly as the job openings and labor turnover survey shows hiring has picked up, but wage growth hasn’t. 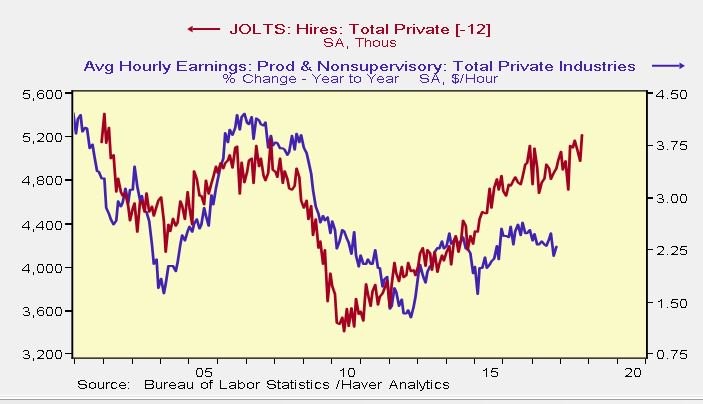 The labor market is diverse; there are many different trends ongoing at the same time. Just looking at the overview of the data doesn’t tell the whole story. One interesting aspect is the bifurcated trends in wage growth for workers within the bottom quintile. The chart below shows the nominal wage growth for the bottom 20% with and without security jobs. 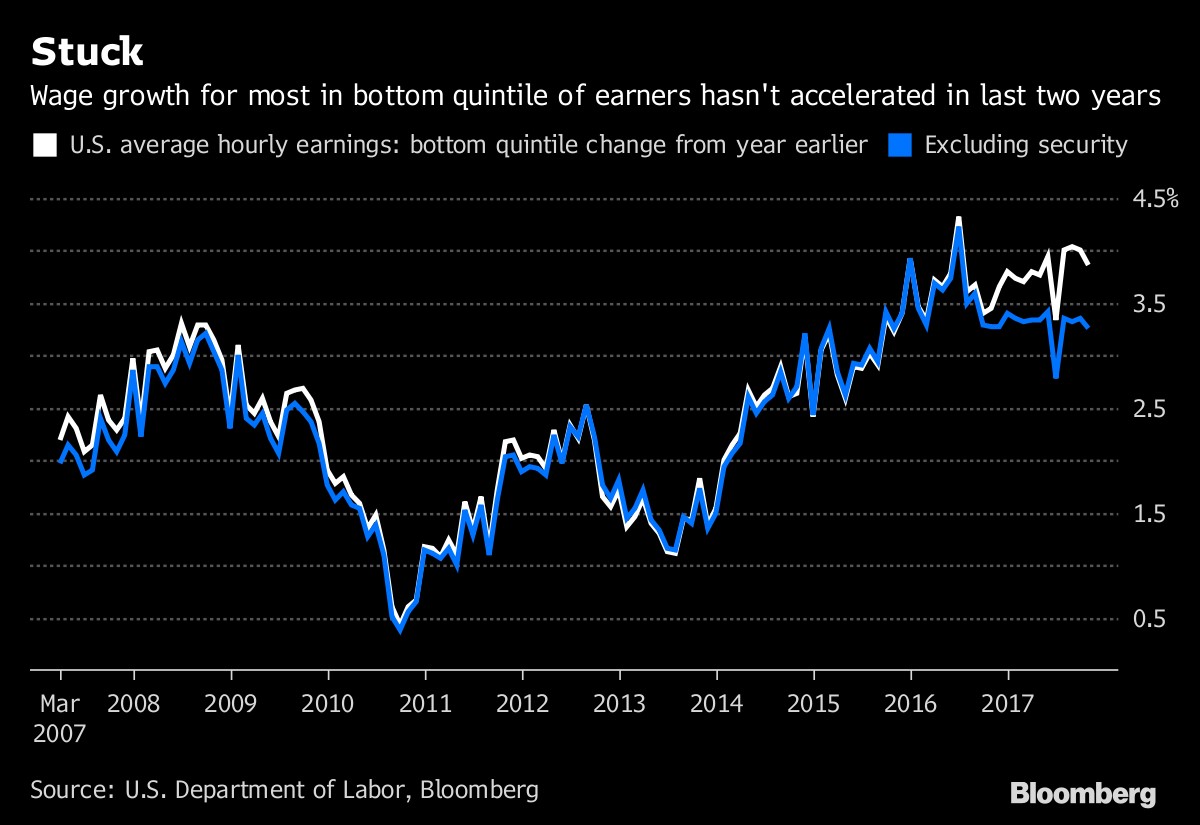 The chart shows that all isn’t perfect for these low paid workers as the wage growth is being driven by security jobs which have seen almost 20% wage growth this year. With the security jobs, wage growth in October was 3.9% which is up from last year’s 3.4% growth, but without security jobs, growth falls to 3.3%. Remember, this is nominal growth, so take out inflation to get the real growth rate. You might ask, why take out the surging segment of workers? Well, security only makes up 0.6% of workers, so it’s manipulating the average too much compared to how many workers it employs.

Even though restaurant sales growth has been weak, the wage growth in workers in the industry was 4.4% in the first 10 months of 2017. One explanation for that is fast casual restaurants overbuilt. This segment rode the excitement created by Chipotle a few years ago. It turns out not every concept will turn into a winner which can open new locations across the country. While opening too many restaurants can oversaturate the industry, they still need to employ workers. The waiters and waitress labor market has thrived this year. On the other hand, the general merchandise stores have only doled out nominal wage growth of 1.4% as they have been hurt by online retailers. This shift in jobs from brick and mortar stores to online retail firms is an example of an aspect that makes wage growth tough to track since the jobs at e-commerce stores are different, for example, some of them aren’t low-skilled jobs.

With wage growth mediocre according to some metrics and decent according to others, this has led to middling inflation in 2017. Core CPI needs wage growth to push higher in 2018, especially with shelter inflation decelerating lately. The chart below shows the Fed funds rate minus the core CPI. With the Fed raising rates 75 basis points in 2017 and inflation staying stagnant, the difference between the two has shrunk. It has shrunk more than the chart below indicates because it doesn’t include the 25 basis point hike in December.

JP Morgan believes when the Fed hikes rates to 1% above core inflation, it pushes the business cycle towards its end, catapulting the economy into a recession. Either inflation will go up in 2018 or that might come close to occurring because the Fed has guidance for raising rates another 75 basis points. The median Fed funds rate expectation is 2.7% in 2019, which would trigger this red flag if there’s stagnant inflation. Although heightened inflation would prevent this recession indicator from going off, if it grows too much, it could hurt stocks and the consumer’s purchasing power. In 2017, the economy was in a Goldilocks state where economic growth was solid and inflation was low. The Fed is taking away the punch bowl in 2018. The hope is inflation increases slightly and growth accelerates. This balancing act can go wrong in two ways. The Fed can raise rates too quickly which would push down economic growth. That’s the ‘too cold’ scenario. Inflation can accelerate too quickly because of the stimulative policies still in place. That’s the ‘too hot’ scenario.

The chart below is an alternative to the stationary analysis done by JP Morgan.

This analysis is more dynamic by including the natural interest rate and the effect of QE tightening. The conclusion this chart arises at is that the Fed funds rate will be too tight in 2018. When you include the Fed’s balance sheet unwind, which will accelerate to $20 billion per month in January, the tightness is more expansive. The last time this tight policy was put in place, the financial crisis occurred about 2 years later. However, policy was too tight for about 5 years before the recession in 2001 and that one was much shallower.

Novice investors see the 2017 situation as a rule, believing that a Goldilocks scenario is normal. Neither a financial crisis like 2008 nor a Goldilocks scenario are normal. Usually, the situation is somewhere in between. If inflation gets too high or economic growth falls, the stock market could experience higher volatility in 2018 than 2017. This is far from something you should fear. Even if rates are too high, a recession won’t necessarily occur. Higher volatility in one of the quietest years ever is hardly Armageddon.