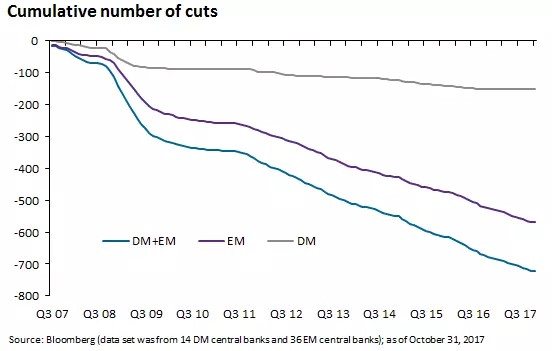 Now that the year is almost over, we can review the performance of various asset classes and markets. Just like how the 52-week high list shows which sectors and industries need to be paid attention to, the best performing asset classes tell us a lot about the economy. The chart below gives a snapshot of the year performance and recent standard deviations of a few investments. 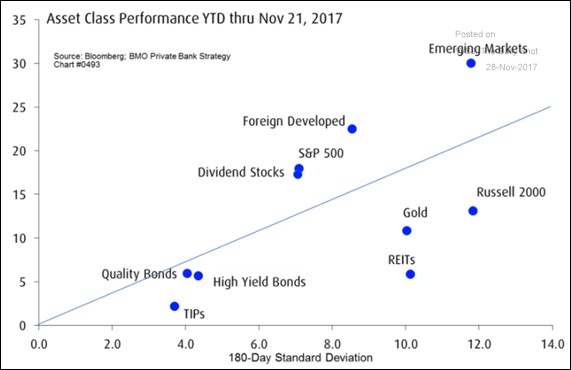 Emerging Markets Were The Leaders Of 2017

The emerging markets had the best performance and the highest standard deviation. The relationship between standard deviation and returns is direct and linear as you can see from the light blue line. The Vanguard Emerging Markets ETF has had a year to date return of 27.22%. The emerging market economies did well this year; they boosted the global economic growth and trade. World growth is expected to have been 3.7% in 2017, with emerging markets growing 5.1% (0.6% acceleration from last year). When you take a step back, the notables are China’s potentially successful soft landing, India’s slowdown, and Brazil’s emergence from its depression which ravaged the economy from 2015-2016. Brazil supplies commodities to China, so China having a decent year helps the Brazilian economy.

Before we get into the country specific results, let’s look at the monetary policy of the emerging market economies. The chart below shows how the developed markets quickly eased policy after the recession and then maintained a slightly downward slope in the ensuing 8 years.

Investors are wondering how the developed markets are going to raise rates because they haven’t raised them throughout this long expansion. That’s an unusual policy on its own. However, the emerging markets make the developed markets’ central banks look like monetary conservatives. As you can see, the emerging markets have been easing rates since the financial crisis. However, it hasn’t been smooth sailing for the emerging economies. Along with the U.S. manufacturing recession and the energy price collapse, emerging market economies had a challenging time in 2015-2016 making the recent rate cuts reasonable in perspective.

Still, it’s amazing to see over 500 rate cuts since Q3 2007. To be clear, the developed market index has 14 central banks and the emerging markets index has 36 central banks. That would make the amplitude of the emerging markets index larger. However, since the emerging markets have been about 5 times more dovish, they’ve cut rates more on average. They had more room to cut and made no mistake about it. JP Morgan estimates, the global economy might need 1,000 rate hikes in the next decade to get back to normal. Future monetary policy all depends on the economic changes. Growth has improved without inflation, which means, for now, rates don’t need to be hiked. However, when prices increase, rates will be hiked. It will be interesting to see how the global economy handles hawkish central banks along with the unwinding of global central banks’ balance sheets.

Brazil Recovers From Its Depression 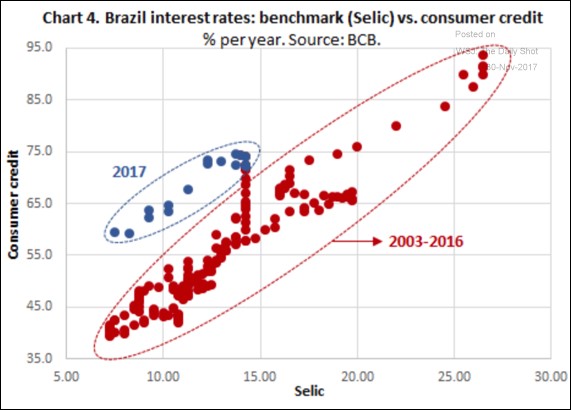 The curve has shifted towards lower rates and higher consumer confidence. Most economic indicators signal the economy is treading water in 2017. The PMI was at 49.5 in October which signals a slight contraction. Services caused the decline as it fell from 50.7 in the previous month to 48.8. The manufacturing confidence increased from 50.9 to 51.2. This suggests the Brazilian economy has bottomed and is looking to turn higher as consumer confidence and business confidence show signs of improvement as the rate cuts do their job and global trade growth improves. Goldman expects 2017 GDP growth to be 0.9%. That’s going to be a mostly accurate forecast because the first 3 quarters have already been reported. GDP growth was 1.3% in Q1, 0.7% in Q2, and 0.1% in Q3. Even though there has been deceleration, growth is expected to be 2.7% in 2018 and 3.1% in 2019. Brazil should have high growth if its government gets out of the way and the political scandals get sorted out because it has relatively favorable demographics (median age 31.7) and is resource rich. In 2008, when the U.S. economy was faltering, the Brazilian economy grew 5.1% because of the commodity inflation. 2017 saw increased trade for commodities without much of an increase in prices. If demand starts pushing prices higher, the Brazilian economy could surpass the Goldman estimates for the next 2 years.

The goal for Chinese policy makers in the past few years has been to have a ‘soft landing’ which means GDP growth stabilizing instead of decelerating. In 2017, GDP growth is expected to have been 6.8% which is one tenth better than 2016. The chart below shows a distinct 2 year upward trend in the 3 trade PMIs reflecting stabilization. 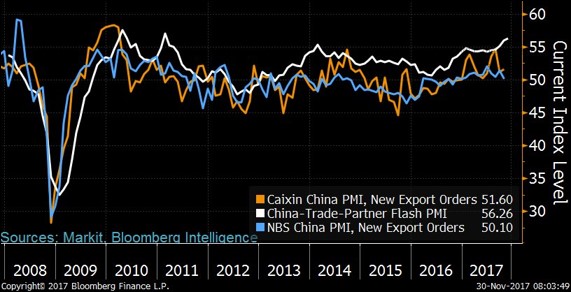 When trade grows, every economy improves. However, Goldman expects China’s growth to resume its deceleration to 6.5% in 2018 and 6.1% in 2019. Economists thought that the election of President Trump and the Brexit would fuel protectionism, but instead it rebounded because of the cyclical improvement. One country to focus on with regards to protectionism is India which is one of the most protectionist economies in the world. India had a rough 2017 partially because of the currency demonetization. India is one of the stars which is expected to boost global growth to 4% in 2018 for the first time since 2011. The country had 7.9% GDP growth in 2016, but is expected to have only grown 6.2% in 2017. Goldman expects it to grow 7.6% in 2018 and 8.4% in 2019.

The takeaway from this article is that the global economy might experience a massive 1,000 rate hikes in the next 10 years to get back to normal if inflation increases, Brazil will see improvement in 2018 as it emerges from its depression especially if commodities rally, and China and India are expected to be headed in opposite directions. The expectations for 2018 are very optimistic as you can see in the chart below. This is far from a guarantee as many forecasts were too bearish heading into 2017 because 2016 was a bad year. Often estimates are more of a reflection of the recent past than what the future holds. As Yogi Berra said, “It’s tough to make predictions, especially about the future.” 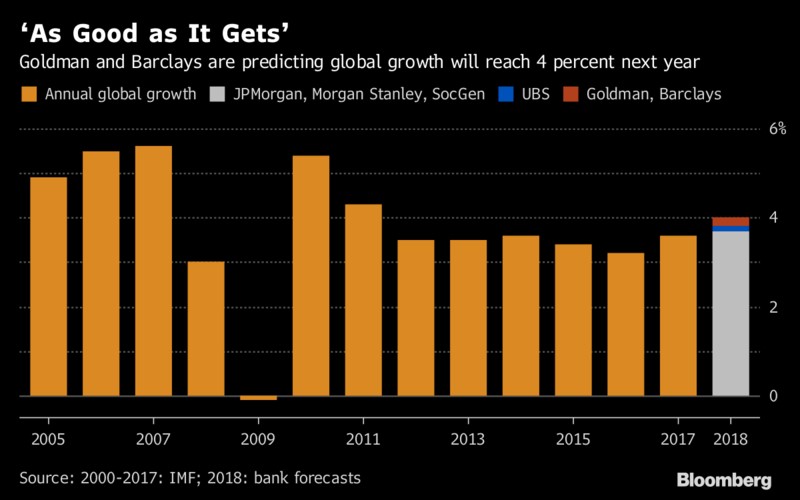 Economists Are Optimistic About 2018