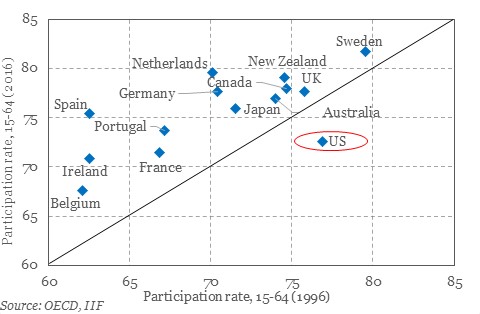 In a previous article we discussed the changing labor market. We need to fundamentally change how we think about how we work and who we work for, meaning it deserves more than one discussion. To get a snapshot of the changes we discussed previously, the chart below shows the percentage of freelancers who are finding work online. 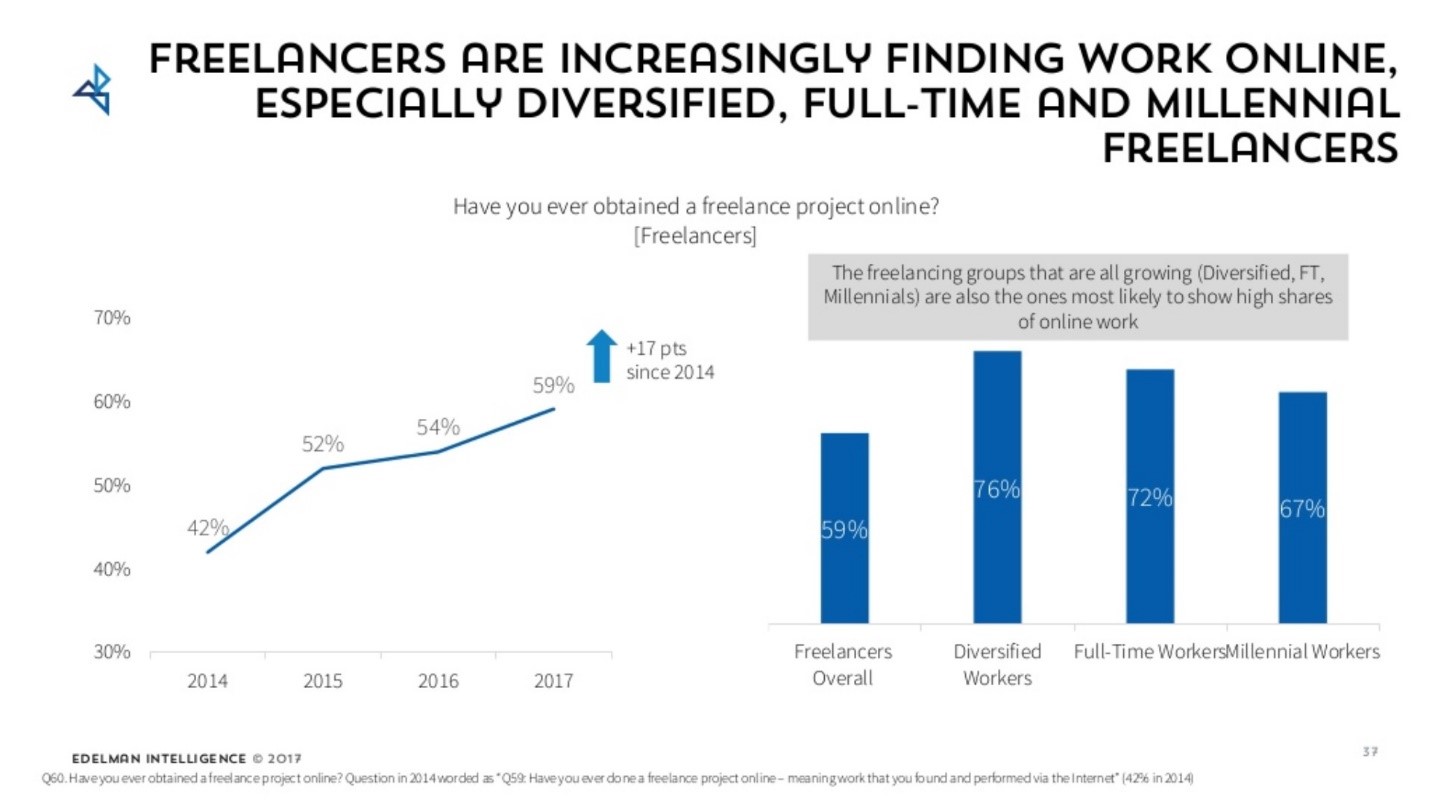 59% now find work online which is up 17 points since 2014. This percentage will increase in the next few years as 76% of diversified workers find work online, becoming the fastest growing segment among freelancers. Online work and freelance work are quickly becoming synonymous. The internet’s ability to allow workers to quickly change employers without changing locations makes growth in freelance work a natural progression for the labor market.

Not only is online/digital work growing in importance with freelance work, it is also growing as a part of the overall labor market. Every industry is embracing technology as the internet grows into every aspect of our lives. Embracing technology increases efficiency; if a firm doesn’t have a digital strategy, it will fail. Digital skills are previously considered a bonus to currently becoming a job requirement in many industries. The chart below shows the recent trend in the labor market. 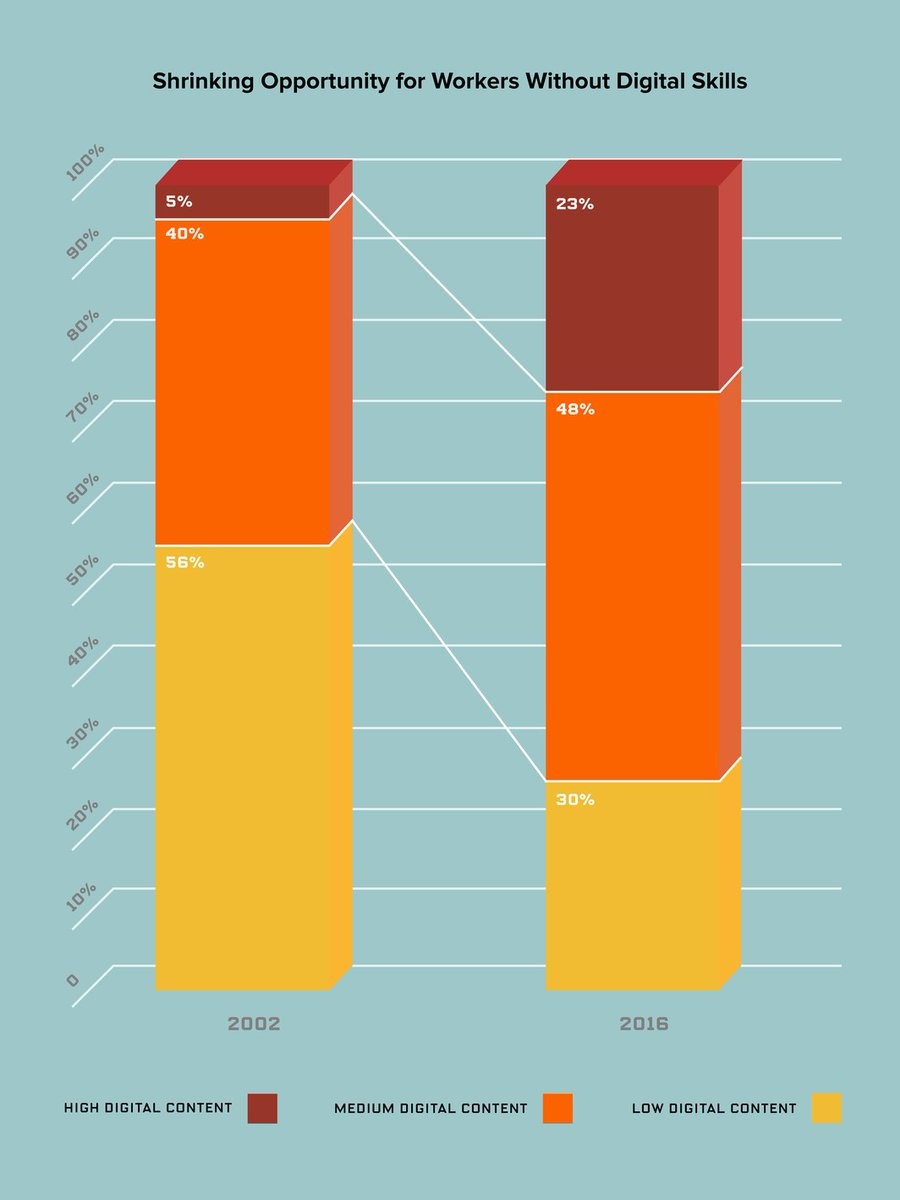 Digital Skills Are More Important Than Ever

Jobs with low digital content have fallen from 56% of jobs to 30% of jobs. This trend will only continue as almost 2/3rds of new jobs created since 2010 require medium to high digital skills.

Is The US Illiterate?

The problem for the US is it lags other advanced economies in basic digital skills. The government clearly does a poor job educating students in public schools since Americans aren’t as prepared for the changing workplace as people in other advanced countries. Even though the US has the 6th highest GDP per capita of the 35 OECD nations, it is about average when it comes to computer literacy.

As evidenced in the Economist chart below, the United States has the same percentage of highly skilled people as the average, more low skilled people, and less people with no skills. 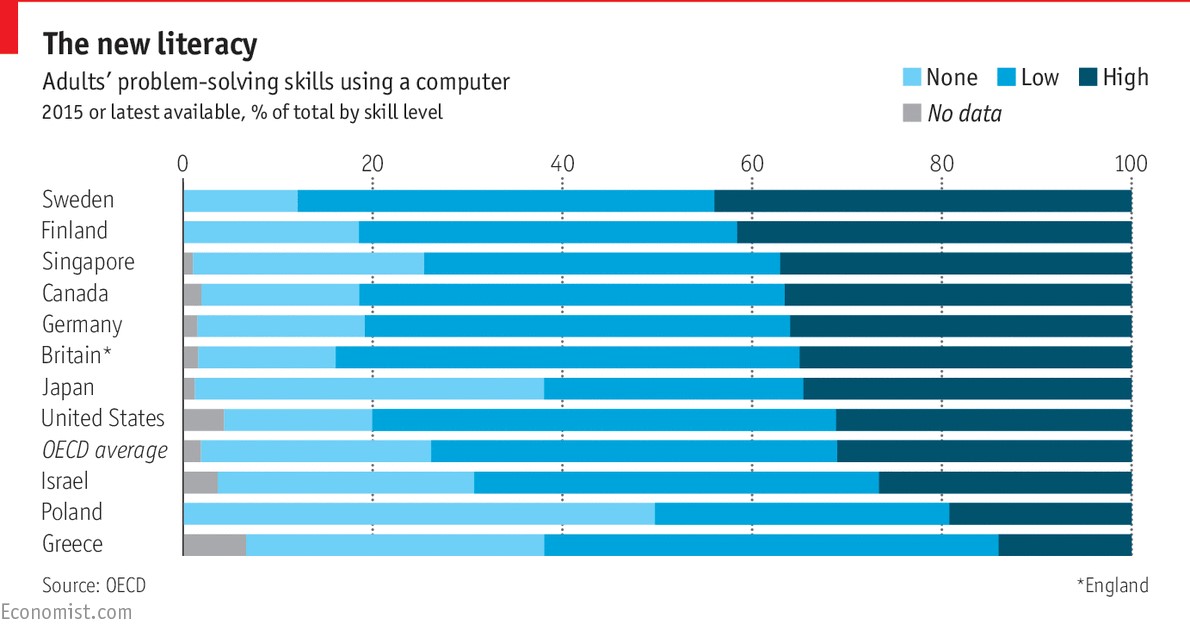 In a free market economy, the option for more job opportunities with better pay would make more workers acquire digital skills. However, America’s labor market isn’t efficient. The government getting involved with the labor market prevents the free market from working efficiently. The big issue with workers not getting jobs which they are potentially qualified for are licenses. It makes sense to have standards for various industries, but the existence of licenses in industries which didn’t previously have them is clunky and expensive. As we have mentioned before, increasing regulations are directly correlated, among other factors, with higher costs for startups and a lower number of small businesses, which incidentally helps improve profit margins of larger companies due to less competition. See how that works? Everything is interrelated.

As usual, the free market comes up with solutions to this problem. The freelancing site Upwork has tests you can take which shows potential employers that you have the skills they require. This might sound like the same concept as the government setting up licenses. The main difference is the Upwork tests are free. The second difference is any worker or employer can decide to leave the website and join another freelancing website. Workers are forced to get licenses by the government. What’s even worse is that many licenses are restricted to one state which means workers can’t get the job they are qualified to do in a different state. That’s maximum inefficiency.

Besides weak public schooling, the other aspect dragging America’s labor force down is the falling percentage of youths in the work force. The chart below shows America’s labor participation rate mix as compared with other major developed nations. 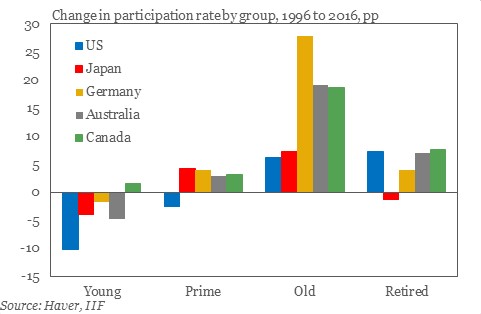 Much of the decline in the labor participation rate in America is because of its increasing median age. However, there is a percentage which isn’t related to this issue. Young people aren’t working as much in this generation as they have in previous ones. For teenagers, getting an education has become more prevalent than getting a summer job.

The chart above breaks down the changes for all segments of the population. There has been a decline in the labor participation rate in young and prime workers while there has been an increase in the participation rate among those who are old and retired. The fact that America is in the worst shape among the advanced economies listed below shows a possible explanation for why the US lags in digital skills. Older people are less likely to have digital skills than young people. As you can see in the first chart of this article, 67% of millennial workers found freelance work online. This is 8 points above the average. That’s just one stat supporting the notion that younger workers have more digital skills.

America’s Labor Participation Rate Has Begun To Lag Other Nations

Cobots Are Taking Over

Using technology improves firms’ efficiency. The term for robots which help workers is cobots. Cobots enable flexible automation, production, and a flexible workforce. It’s much easier to get a robot to augment production in manufacturing than hiring temporary workers. Temp workers need time to learn how to perform the task. Making employees work more hours decreases efficiency. This is where cobots come in. As you can see from the chart below, Goldman Sachs is predicting cobots will replace temporary workers. 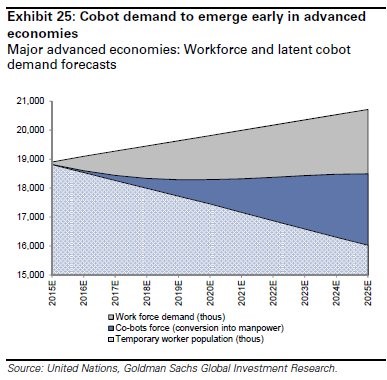 The labor market is changing. If you are a worker with a deficit in technology skills, then you should learn as much as you can and as quickly as possible. It might be as simple as watching a YouTube video or it might be more complicated like taking a class. When you improve your skills you become more resilient in the marketplace when competing for jobs with other people and robots. The US has a digital skills deficit, so your newly acquired skills will be in high demand.