How the unwind of central bank balance sheets affects stocks is far from a foregone conclusion. Technically, you never know how a equities will react to a policy change or a news item, but in general an earnings beat is positive, negative guidance is negative, and geopolitical volatility is negative for the overall market except the defense sector. Global central bank interventionism is different because it’s new. The central banks have acted to prevent selloffs from getting too sharp, such as saving the economy from recession in 2016. One would think if the market isn’t protected by the central banks, it would be negative, but that’s yet to be proven. It’s important to be weary of people who act as if their opinion on what will happen is a forgone conclusion. There’s no rule that risk assets need to act in a certain way especially in light of the unfolding new tapering/tightening policy following a world wide experiment never attempted nor seen before. What works in theory, doesn’t always in reality.

Opinion: QE Does Not Matter To Stocks

There are a few different opinions on what will happen in the next few years as central banks raise interest rates, allow their bonds to expire and/or potentially sell their stock holdings. It’s only natural to assume that the Swiss National Bank will one day want to sell its holdings in Farmville, but that would also require a world operated on pure logic.

The first opinion we’ll review is that such theoretically negative actions for risk assets by central banks won’t cause a selloff in stocks. The thought process is that the first quantitative easing helped inspire confidence in the system when investors were panicking, acting like a placebo which didn’t negatively impact financial markets in the long-term.

Another argument often cited is that the natural rate was low, so interest rates deserve to be low. Following this logic, if interest rates should be low, the zero percent Fed funds rate didn’t act as a stimulus.

Counterpoints: QE Does Matter To Stocks

The most obvious counterpoint to these arguments is that the Federal Reserve felt the need to conduct QE2 and QE3 even though the recession was already over. Why expand the balance sheet if everything was alright?

There is a common belief among bearish investors who claim that the QE unwind and subsequent rate hikes will cause a crash in the stock market in 2018. The same argument has been made about previous years when the Federal Reserve was just starting to hike rates.

While Draghi says he will stop the unwind if anything unforeseen occurs, the general movement in the past 12 months has been in a hawkish direction. The Fed started its unwind and the ECB has tapered bond buying from €80 billion per month in the first 3 months of 2017 to €30 billion per month starting in January 2018. While there has been a correlation between central bank bond buying and equity markets in the past few years, assuming this will occur is making the mistake that correlation equals causation. The correlation already started to break down in 2017, with stocks rising and balance sheets growing slower. 2018 and 2019 will tell us if this opinion is accurate.

The final opinion is somewhere in between the first two opinions mentioned. This one is that central banks have created massive moral hazard in the form of a market put, wherein they prevent assets from experiencing normal market corrections.

The chart below illustrates the instances where the central bankers have intervened when the stock market was struggling in the past few years.

There hasn’t been a need to quell the market in the past 1.5 years because there has been nothing but blue skies.

Therefore, if nothing negative happens to the economy or earnings, the next few years without central bank interventionism will be fine for risk assets. The moment something goes wrong and the central banks don’t have the market’s back, volatility will return to levels last seen before this new era of QE.

The VIX has only been around for 30 years. Since the VIX is at the lowest point since its creation, we need to make some alternations to compare this period to the past. The chart below does just that. 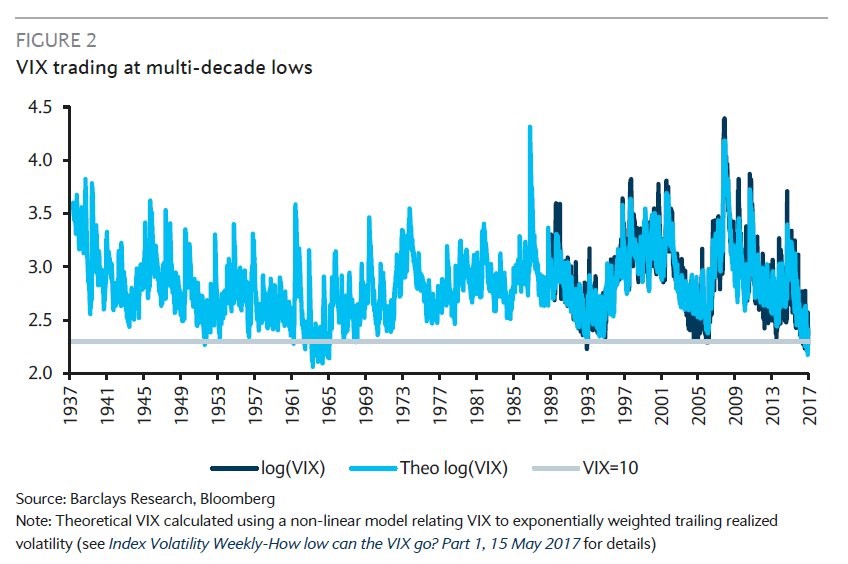 Volatility Is the Lowest Since the 1960s

The current calmness in the market is like the 1960s. Another comparison shows the market was also calm in the 1890s. That means this current lull occurs about once every 55 years.

We’ve mainly discussed stocks in this article, but it’s not just stocks that have done well. The image below shows a cross section analysis done by Bank of America Merrill Lynch. 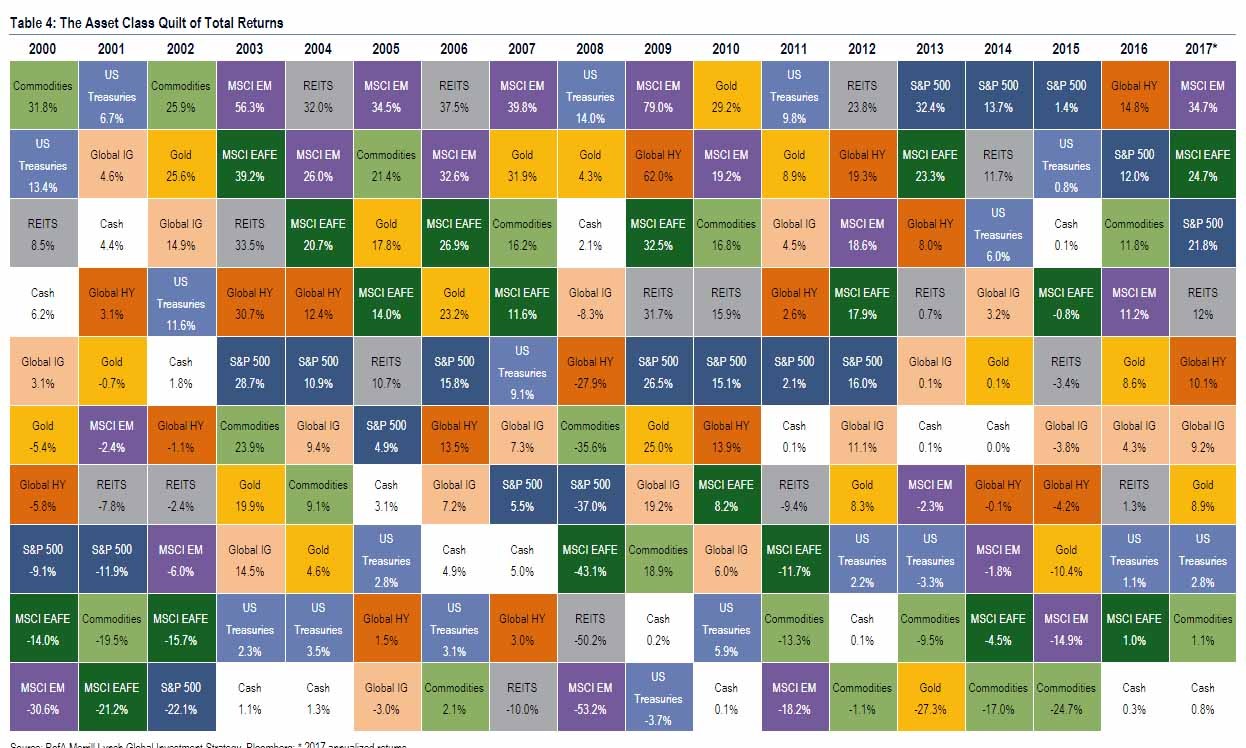 Everything Is Doing Well

In the past two years, every single major asset class has had positive returns: cash, commodities, U.S. treasuries, gold, global investment grade bonds, global high yield bonds, REITS, the S&P 500, the MSCI Europe Australia and Far East index, and the MSCI emerging markets index. Since this rally has been global, it goes hand in hand with the global nature of the central bank interventionism.

One of the most important central banks to focus on is the ECB as the EU is the largest economy in the world when you include all its members. Surveyed by Bloomberg, the timeline below shows what economists expect the ECB will do in the next 2 years. The bond buying is projected to end in Q4 2018 and the ECB will start raising rates in 2019. This is the beginning of the end of the stimulus policy. The Fed has already started to rewind some of the stimulus with the unwind of its balance sheet and the 125 basis points of rate hikes. The question is when the next recession will occur and whether this relative hawkishness will be the culprit? 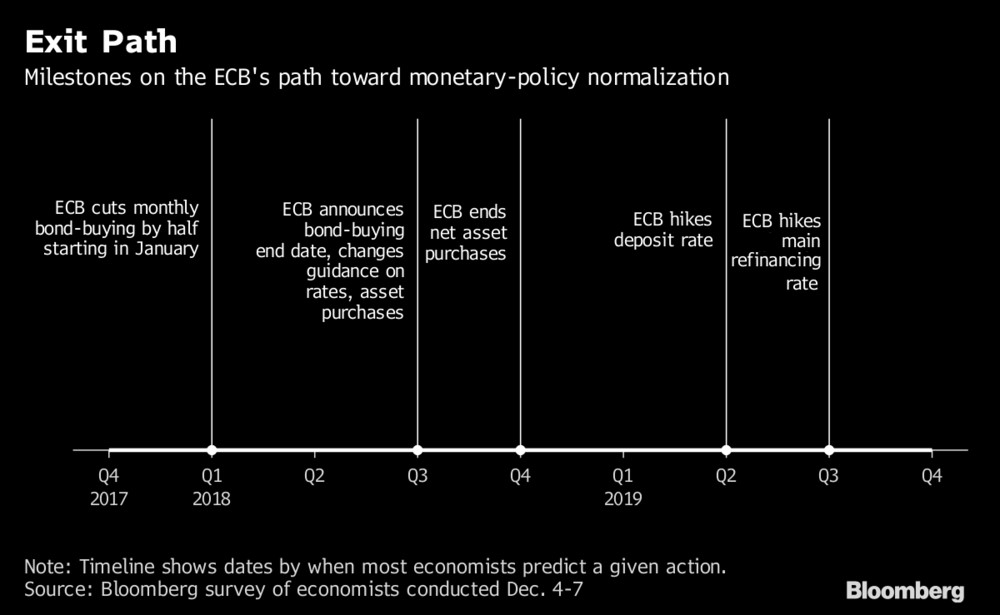 The annotated Bloomberg chart above demonstrates that central banks bailing out the market multiple times from 2013-2016 is disconcerting. Should the market realize that central banks might not have its back in 2018, there could be a return to volatility. The question is if the market will just return to normal or instead if the volatility, which is currently compressed like a slinky, will expand rapidly. The only thing we know is that historically, low volatility and all the major indexes and markets increasing usually doesn’t continue for long. It’s always a good idea to rotate your assets from cyclically overstretched and overvalued to undervalued. What cannot continue indefinitely will not.