The New Trend In Housing 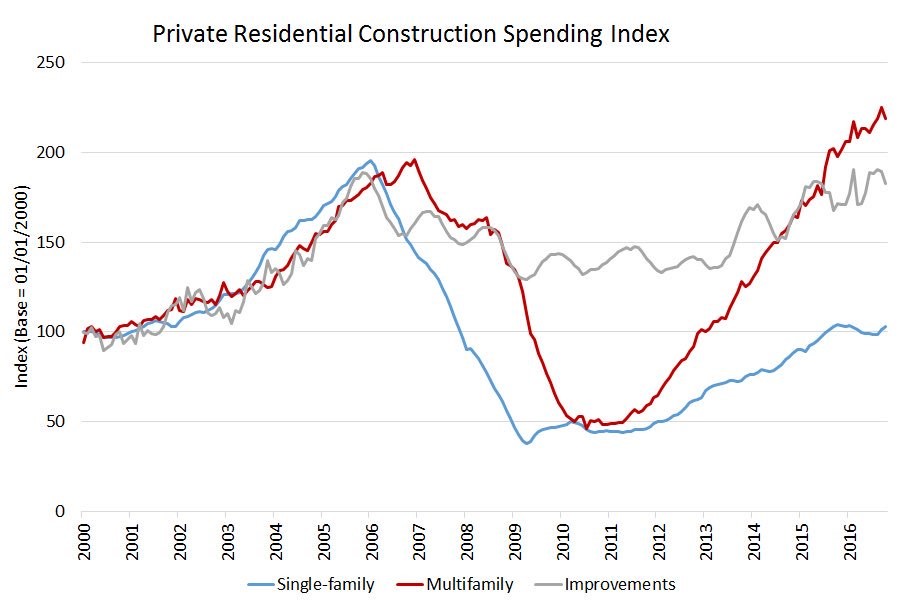 In this article, we’ll look at the latest changes to the housing market which are being brought about by demographics. Another way of saying that is to say millennials have different tastes, desires, and financial situations than baby boomers and generation X which is fueling changes in the market for living spaces. In short, this article will discuss how more millennials are living in apartments than previous generations. Some of these types of articles tend to have a bias against millennials to generate clicks, but rest assured, we’re just looking at the facts, not blaming millennials for any changes that are occurring. Some societal shifts are good and some are bad. Either way, an entire generation of people have diverse opinions and situations, so speaking negatively of them because of societal shifts is wrong.

The construction index in 2017 for multifamily homes far exceeds the previous peak in 2007 before the housing bust, while the index for single-family home construction is at about half the prior peak. This cycle’s divergence between multi and single family housing has occurred despite both peaking and bottoming near the same level and at the same time prior. It’s also worth noting how well home improvement construction has done. Even though we’re talking about new trends among younger folks in this article, the baby boomers fixing up their homes near and after retirement are driving this trend. At that age, moving doesn’t make sense. The combination of having a lot of cash because they’re at the peak wealth in terms of the wealth life cycle and not wanting to move makes home improvement the next best alternative. Younger people also live with their parents longer, so making the house more comfortable for more people is an added incentive for renovation.

Discussing the dynamics in the multifamily housing market means we need to first talk about the single-family market. Even though the construction index hasn’t come close to the prior peak, the market is still hot for single-family sellers. Less single-family homes are being built because of demand changes which means there’s less supply. If supply is tighter than demand, prices rise.

The chart below shows the NAHB housing market index for single-family homes. 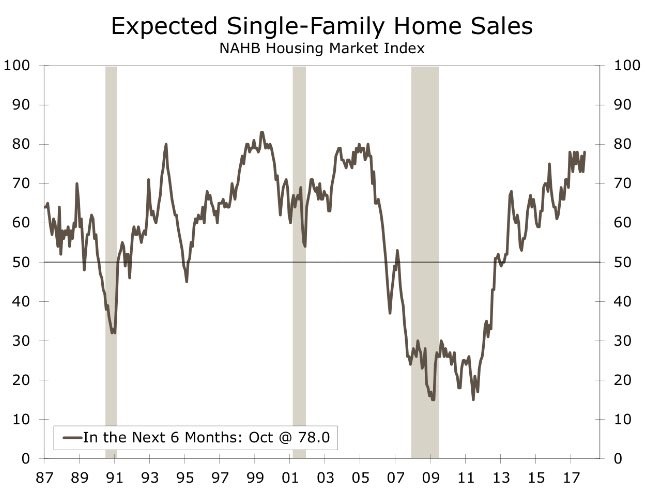 The index is near the peak seen in the mid-2000s which was probably the hottest housing market in US history because of how easy it was to get a loan. Considering the fact that less loans are being given out to buyers with low credit scores, it’s impressive to see the index recover. This is being driven by the strong labor market, as measured by the unemployment rate. Wage growth isn’t what many want, but the unemployment rate and jobless claims signal that those individuals with high skill levels who want a job can get one, especially in the manufacturing sector, surprisingly.

The chart below is a bit deceiving because the scale on the y axis doesn’t start at zero. Keep that in mind when you review it. That being said, it’s informative because it shows that the inventory of single family homes is at the lowest point since 1994 on a seasonally adjusted basis. 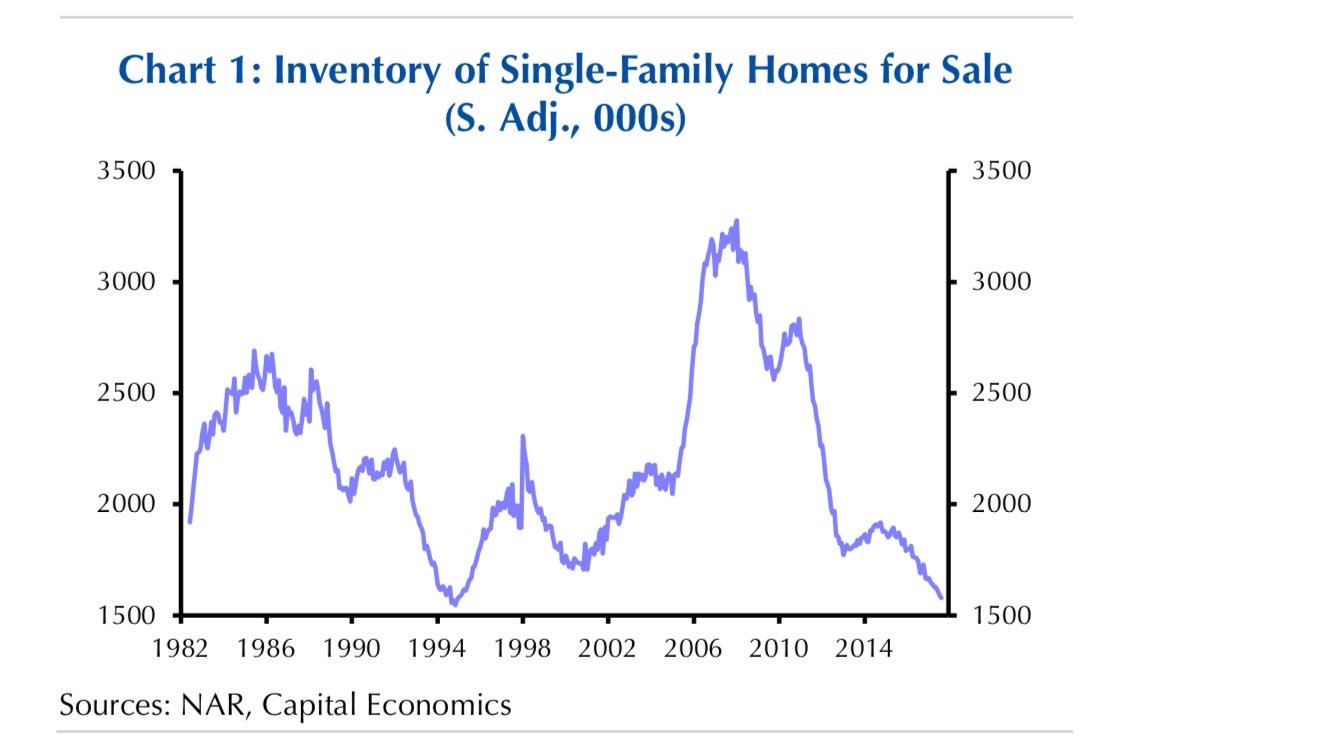 If supply falls faster than demand, prices rise. This level of inventories is a recipe for price appreciation, just like the enormous inventories in 2006 signaled there was about to be a sharp decline in housing prices. This information on the single-family housing market, begets the question why construction is so low compared to the multifamily market. 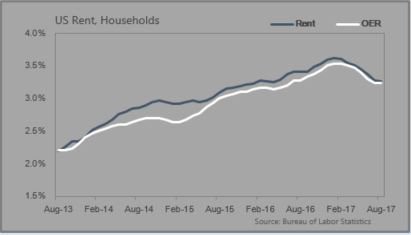 The growth of rent prices has exceeded the owner’s adjusted rent growth for the past 4 years. The fact that rents went up more than single-family home costs shows that demand for apartments far exceeded demand for houses considering how much more construction into apartment buildings than houses has occurred in the past few years. Luckily for people who are getting pinched by the low real wage growth, housing price growth has decelerated in the past few months. For a lot of this recovery, wage growth has been below shelter inflation.

Let’s look at why apartments are doing better than houses. 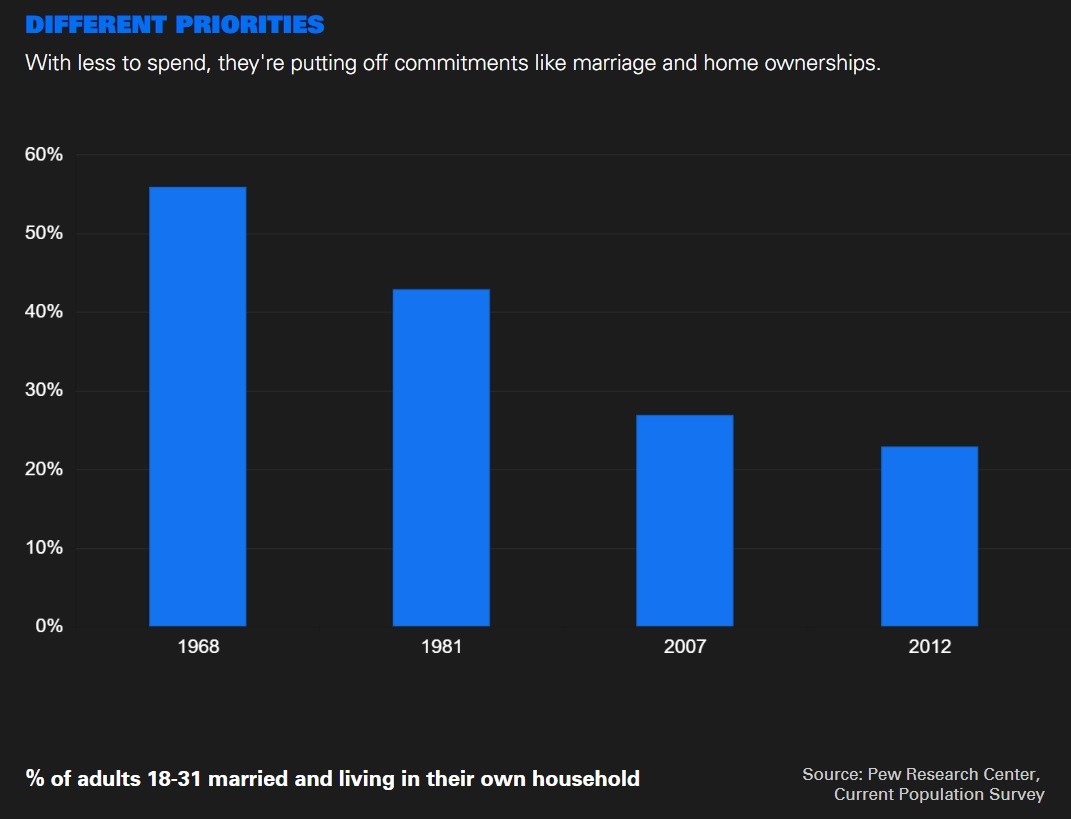 Millennials Not Forming Their Own Households

The most straightforward reason is that households are shrinking. That means living spaces can shrink without anyone in the home noticing a difference. You don’t need an extra bedroom, if there’s one less person in your family than in the previous generation. In 1960, there was 3.33 people in each household. As of 2016, there was only 2.53 people in each household. Millennials are having less kids, more are single longer in life, and less are getting married. As you can see in the chart above, the percentage of 18-31 year olds who are married and living in their own household fell from 56% in 1968 to 23% in 2012. Most young people now think adulthood starts at 30 instead of the traditionally held belief that it starts at 18.

One other reason for increased apartment renting is more millennials like to live in cities where there aren’t many affordable single-family homes. Millennials are still young, so they can tolerate the cramped apartments to enjoy the city life. When they start having kids, they’ll want to move into a house with better school districts than inner city schools which are notoriously known to be worse.

Hopefully this article helped you understand the changes in the housing market and why they are occurring. The goal wasn’t to rip apart millennials like many articles do when they discuss how millennials aren’t moving out as quickly as previous generations. The next trend we’ll be watching is the relationship between wage growth and shelter inflation. If wage growth can improve while shelter costs decelerate, we might see a pickup in disposable income which can drive the economy to grow faster.