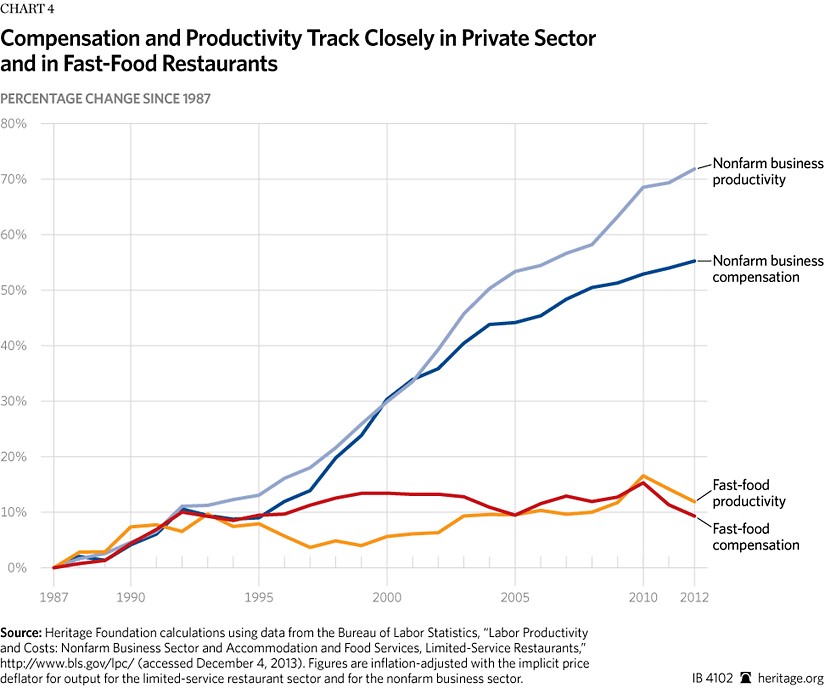 There is a lot of misinformation on the internet about the minimum wage. The reason for this is it is a politically charged topic. If your goal is to push an agenda, it’s easy to manipulate statistics in your favor.

The phrase popularized by Mark Twain is applicable in this situation:

“There are three kinds of lies: lies, damned lies, and statistics.”

The goal of this article will be to approach an objective conclusion regarding whether minimum wage helps or hurts people.

The first common mistake made is to claim that the current 4.3% (as of May 2017) unemployment rate suggests that minimum wage hikes are not hindering job growth. Firstly, the unemployment rate is a very inaccurate measurement, unlike the participation rate which may be more reliable and which suggests a much higher true unemployment rate. Secondly, correlation doesn’t equal causation.

The chart below is a survey done of employers. 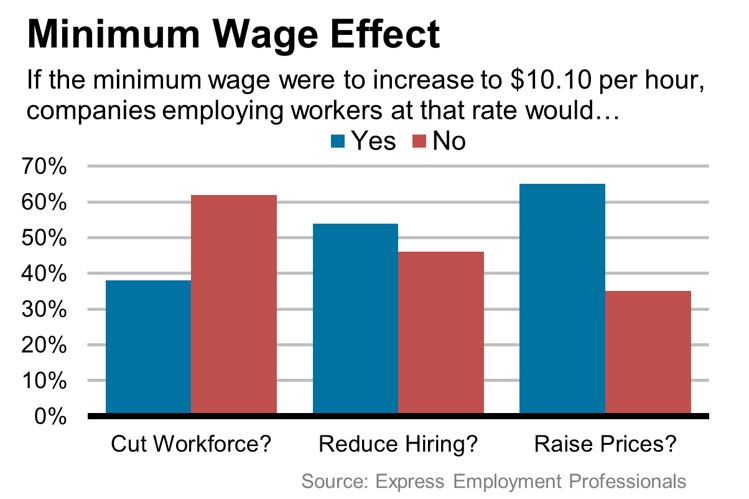 Most businesses would reduce hiring if the minimum wage was raised.

Just under 40% of employers said the minimum wage would cause them to cut their workforce. Don’t be deceived by the red bar being higher than the blue bar. Those who said it wouldn’t cause them to cut their workforce didn’t necessarily say it would help them. As you can see, over 50% of businesses said they would reduce their hiring. This proves the economy is grinding despite the headwind of minimum wage hikes.

A final point made in this survey is that over 60% of employers would raise prices to combat the minimum wage hike’s impact on their profits. This increases inflation for Americans. Inflation, as measured by the CPI, has been low in this business cycle, but that doesn’t mean the increase in the minimum wage doesn’t cause inflation. To clarify however, inflation in financial assets such as stocks, bonds and real estate has skyrocketed. Not to mention the increase in your grocery bill or the cost of fuel despite the fall in price of a barrel of oil. Inflation, as measured by the CPI, is low despite the effect of minimum wage laws. Thankfully, minimum wage laws only affect a small part of the labor force which isn’t enough, in of itself, to cause overall economic inflation to rise.

As reported by the Bureau of Labor Statistics:

The minimum wage distorts the market because it makes it illegal to pay someone a wage they would normally accept. Whether it’s hiring less workers or firing workers, some people on the bottom rung of the employment ladder will be hurt. In particular this hurts young workers who are just beginning to earn an income, and as such, provide less economic benefit than someone with an education and experience. Since by definition, raising the minimum wage makes it illegal to hire people below a certain price point, this means that companies can afford less people for the given position. As such,  this makes low paying jobs even more stressful for workers as this requires them to do the work that was previously done by more than one person.

Although teenagers are mainly the ones affected by minimum wage laws because they usually don’t have skills or experience to warrant high pay, the reason why the labor force participation rate among teenagers has fallen in the past few decades isn’t entirely because of new minimum wage increases.

The chart below which shows the decline in the labor force participation rate for those ages 16-19 is often blamed on the minimum wage, but that’s another case of correlation not equaling causation. 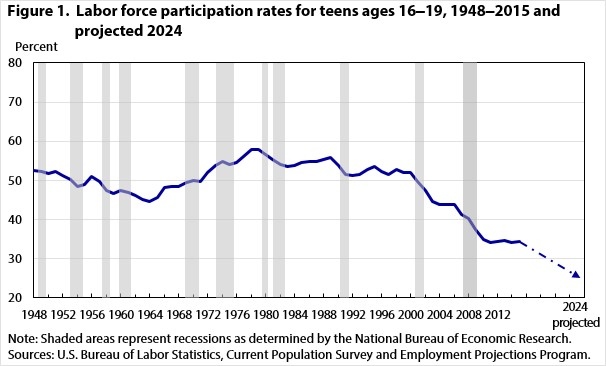 The labor force participation among teens is dropping. 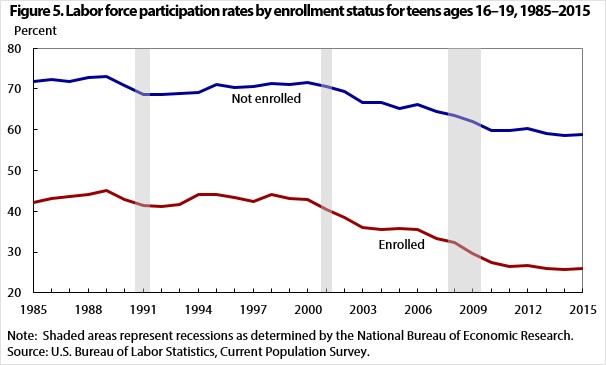 The labor force participation rate is lower for teens in school

Not only are students spending more time in school during the summer, they’re also enrolling into college at a higher rate as you can see in the chart below. Students have decided that investing in their future is worth more than a minimum wage job. This is a free decision. That provides the argument against the minimum wage. No one is forcing workers to take low paying jobs. In a free society people get to choose how they live their lives. 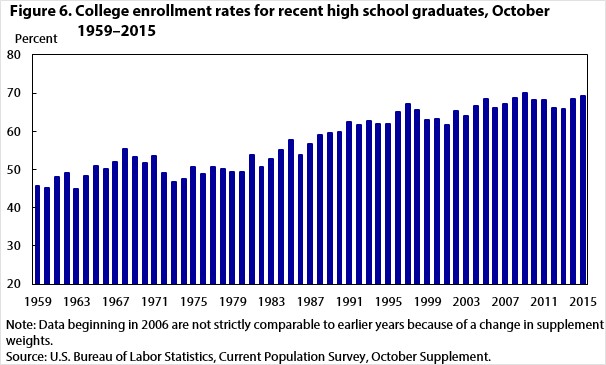 The college enrollment rates for high school graduates is increasing

The final reason why the labor participation rate is lower among teens than it was in the past is because older people are providing more competition for the low paying jobs. As you can see in the table below, in the food preparation and serving, sales and related, and office and administrative support categories, the percentage of older workers is increasing and the percentage of younger workers is decreasing.

Compensation & productivity are more closely aligned than it seems

As you can see from the chart below, in the latest cycle most workers aren’t seeing their productivity rise which stifles wage increases. The only way to grow wages is to grow productivity, not to make legislation which forces employers to pay workers a certain rate.

Real output per hour growth is slow this cycle

The takeaway from this article is that many arguments about the minimum wage are faulty on both sides of the debate. Those who support minimum wage hikes wrongly say that the current supposedly illusion of economic growth, as measured by the increase in the stock market, bonds and real estate, proves that minimum wage hikes do not create unemployment. Fueling the growth of financial assets, as opposed to the economy which continues to grind at sub par growth not seen since the great depression, has been central bank intervention in the form of quantitative easing. Secondly, the low-wage productivity growth of fast-food workers indicates that it would be counterproductive to hike wages, as this would force more people out of the labor force. On the other side of the argument, minimum wages laws currently are not the leading cause of teens dropping out of the work force; they are choosing to because they want to pursue their education, forcing them to take on record amounts of student loans, something that is not paying off for them.

Want to learn more about economics? Subscribe to our free email newsletter by entering your email.