Are Bitcoin & Cryptocurrencies A Buy Or Sell? 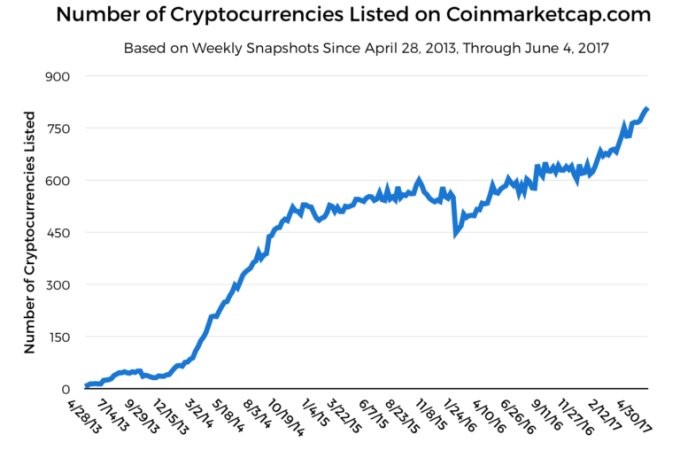 Bitcoin has become more popular in the past few weeks as the price has risen. As you can see from the Alexa chart below, the traffic to coindesk.com, a website which has information about bitcoin, as skyrocketed. CNBC has been covering it more lately. This likely means many people are reading about it for the first time. This article will help you avoid some mistakes when potentially getting involved with bitcoin or any other cryptocurrency.

The traffic to Coindesk.com is skyrocketing.

One of the basic pitfalls to avoid when looking at buying bitcoin is that you should avoid buying the Bitcoin Investment Trust. It may sound like a simple way to buy bitcoin as it is traded on the OTCQX which allows you to buy it with a normal brokerage account. With that convenience, you are getting much less bitcoin than you can get if you just buy it on an exchange like Coinbase. As you can see from the image below, you pay $485.00 to get $253.72. That’s a 91% premium for your convenience. 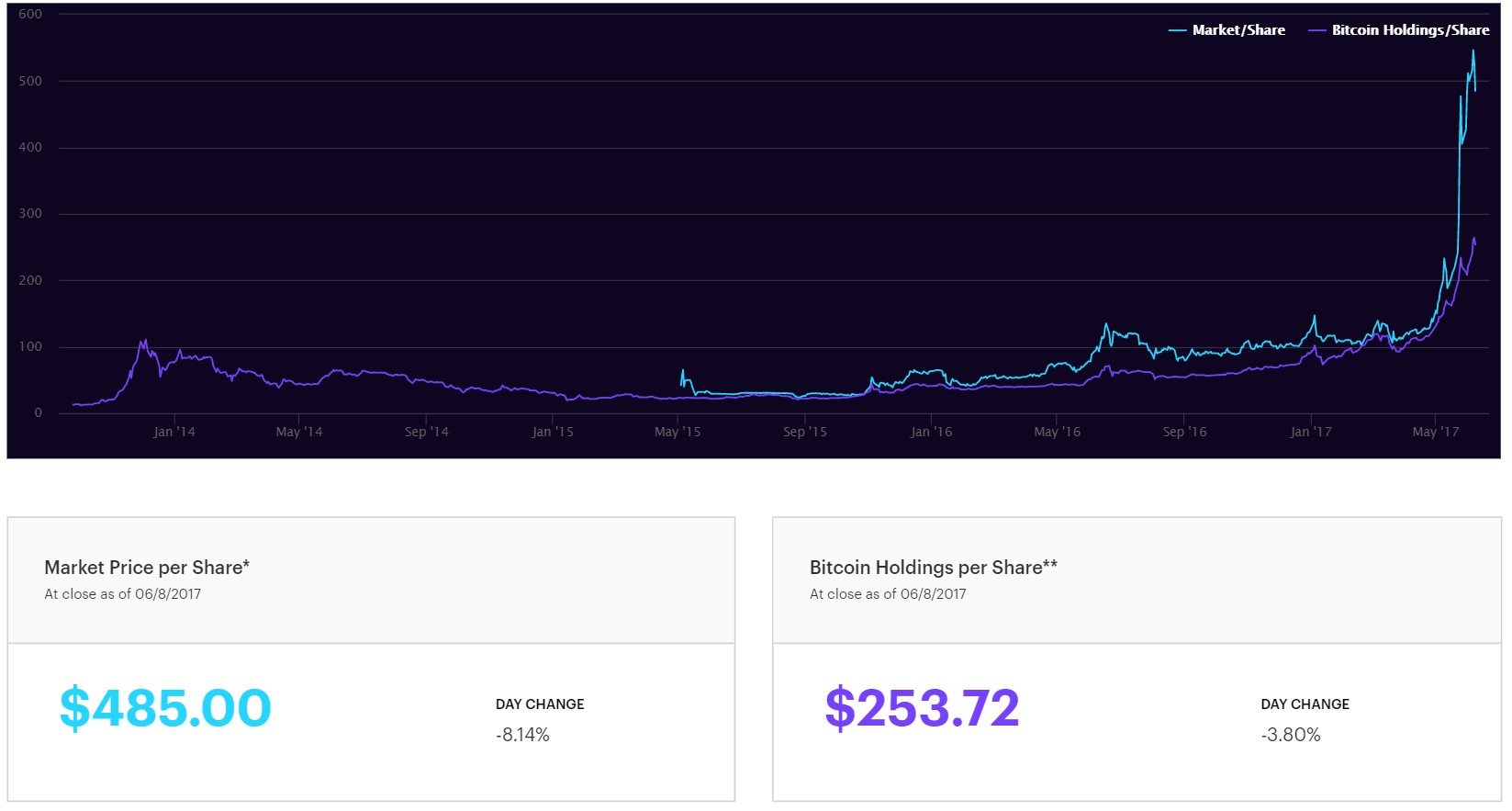 The Bitcoin Investment Trust has a 91% premium over bitcoin.

Buying bitcoin is already a risky strategy. There’s no reason to pay 91% more than the value of the bitcoin you’re getting. If you think bitcoin will be rival the dollar in the long-term, it will become easier to buy the currency which will wipe away the premium this index is getting. You’re essentially betting against bitcoin being popular by buying this index. Hedge fund managers aren’t going to use this index to get bitcoin if they start investing in bitcoin en masse.

Another tip is to make sure you secure your bitcoin. In the article titled below, an internet entrepreneur details how he lost $8,000 in cryptocurrencies. His billing information was acquired by a hacker who was able to use it to take over his cellphone by calling Verizon. Then the hacker got into his Coinbase account and drained the funds. He didn’t have his cryptocurrencies secured in the Coinbase vault which is secured offline. However, if someone hacks your account it’s possible they can get into that as well, although it’s tougher.

This article depicts how a tech entrepreneur lost $8,000 in cryptocurrency.

The best way to secure your bitcoin is in an offline wallet like Trezor. It’s almost impossible (as of yet) to have your bitcoins stolen on that because even if the physical device is stolen from you, the thief won’t have the codes to unlock it. With the latest popularity of bitcoin, hackers are eagerly awaiting to exploit beginners who aren’t familiar with security. At this point, the bitcoin firms have beefed up their security standards after the failure of Mt. Gox, so the easiest target is consumers. Two factor authentication with a phone number is not enough to secure your account.

One of the most obvious and toughest questions with bitcoin is how to value it. Just because it’s difficult to value doesn’t mean it’s not a good investment. Being difficult to value is the signature of some of the best investments. If it was easy to value, the asset would be valued correctly and there would be very little upside. Investors who take risk and do correct analysis are rewarded by the market. 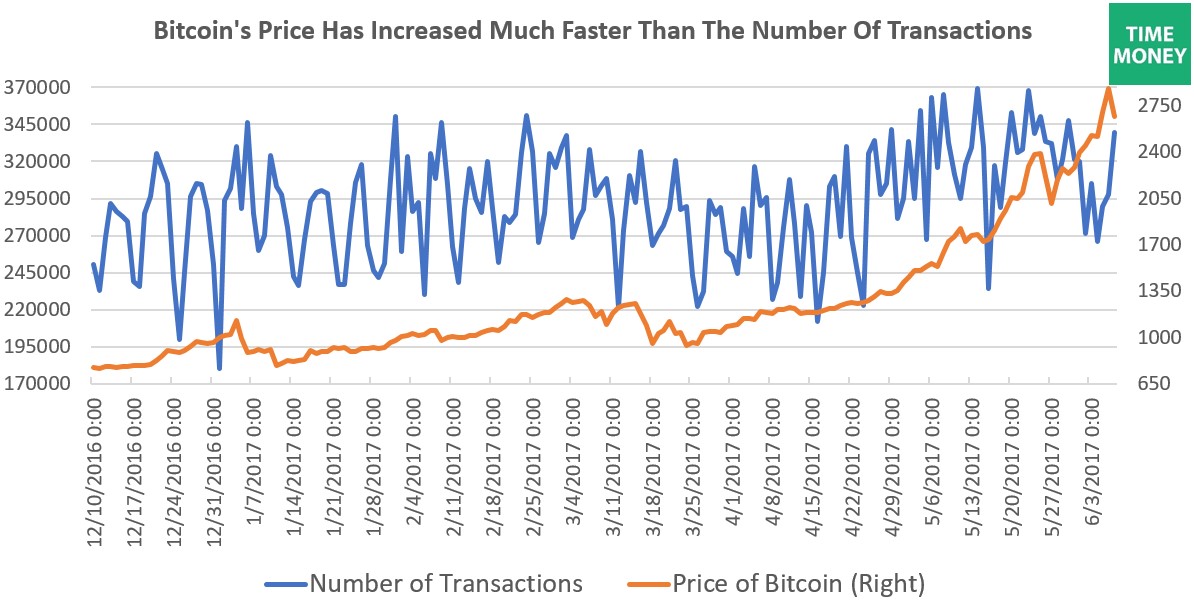 Bitcoin’s price is up way more than the number of transactions using it.

Regardless of whether bitcoin becomes the most popular global currency, defeating the U.S. dollar, it’s important to understand that any asset which has an exponential rise in value will have a sharp drop at some point afterwards. Predicting when this will occur is difficult, but the fact that it will happen hurts the case for buying now if you plan on holding it for the long run. There is a great amount of hype with bitcoin which is why now is a great time to read a quote by Warren Buffett.

“The trick in investing is just to sit there and watch pitch after pitch go by and wait for the one right in your sweet spot. And if people are yelling, ‘Swing, you bum!,’ ignore them.”

There’s no reason to let emotion get the best of your decision-making process. Don’t let fear of missing out affect you decision.

Alt-Coins Are On Fire

The final tip when investing in cryptocurrencies is that you must do your research if you are buying an alt-coin. An alt-coin is an alternative cryptocurrency to bitcoin. One of the reasons bitcoin’s price has been appreciating lately is because speculators need to buy bitcoin to get the alt-coins. The current expansion in alt-coins is being led by ethereum as bitcoin’s market share as percent of the total cryptocurrency universe declines. While ethereum is billed as the next great currency because of its ability to host smart contracts, bitcoin has an open source platform called RSK on its network which enable smart contracts.

The speculative scramble to get into the most obscure cryptocurrencies is similar to when financial stocks were rallying in 2009 after the stock market bottom. The riskier a bank was, the more its stock appreciated. That was because investors realized that the banking system was improving. At the margin, the worst banks were affected the most by this improvement.

There’s a large risk with buying into an unknown cryptocurrency. It’s best to do a lot of research into its protocol before putting any money into it. It’s also important to avoid risking money you can’t afford to lose. The technology is advancing quickly, so this research is tough to get a handle on. One thing working against alt-coins is shown in the chart below. As you can see, the number of cryptocurrencies has skyrocketed in the past few years. Greater supply can decrease prices.

The number of cryptocurrencies is up hugely in the past few years.

The takeaway from this article is that bitcoin is becoming more popular, however as the popularity of bitcoin increases along with its price, so do the risks of investing into it. The higher the price, the higher the risk of ownership. In otherwords, your risk of owning bitcoin are 10x what they were just a few years ago. As such, it may be prudent to wait for sharp selloffs and wait for periods of consolidation rather than buying at historically high valuations in mere hopes that it keeps going higher.

Additionally, before investing a single penny into cryptocurrencies, including but not limited to bitcoin, it’s important to do your research and understand the technology behind the currency and its pros and cons. Simply investing in seemingly cheapest cryptocurrency on grounds that you can buy a lot of it with few dollars is pure gambling and is a very speedy way to lose everything on your investment.