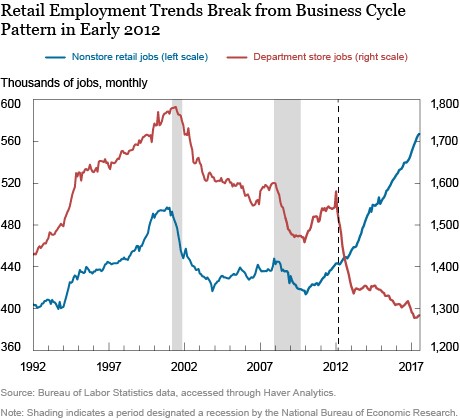 Most of the articles that discuss the latest changes in retail talk about an apocalypse for physical stores at the hands of online shopping. This is ‘drive by’ analysis that misses the whole point. There are big changes in the way consumers are shopping; simply using the increase in online sales to explain everything is a lazy approach. Secondly, brick and mortar stores aren’t being decimated. More stores are being opened than closed. Only certain areas like department stores are doing poorly. Because negative clickbait articles do well, you only hear about when stores are being shuttered. The explanation that stores are being destroyed by Amazon isn’t likely the whole truth. The whole truth is that retailers that are being hurt don’t have good inventory management, a friendly/knowledgeable staff, and inviting stores which embrace technology. As you can tell, the truth is never something as simple as what is explained in the media. That’s why your choice of articles is pivotal to your investing performance. You need to read rigorous reports and articles to make good decisions because you naturally don’t have the time to research everything in depth. Secondly, you might be starting with a false premise if the cornerstone of your research is mainstream articles.

First let’s set the scene on how retail is being affected by online trends. Then we’ll look at the other changes undergoing in retail. The online shopping chart shows there has been an increase in sales in both total dollars and percentage of sales. The trend started in the early 1990s and seems to have accelerated in the past couple of years. The past few years of sales gains have been low hanging fruit for this sector because many physical chains had terrible customer service as inventory has been off by as much as 25% leading to customers not getting the product they want. It’s easy for online sales to take market share from a business that doesn’t have the right assortment of products demanded by the consumer. When some articles discuss the growth of online retail they do it in a negative light, but it’s possible for online to grow the whole pie of consumer spending because there’s always going to be a need for physical retail locations. 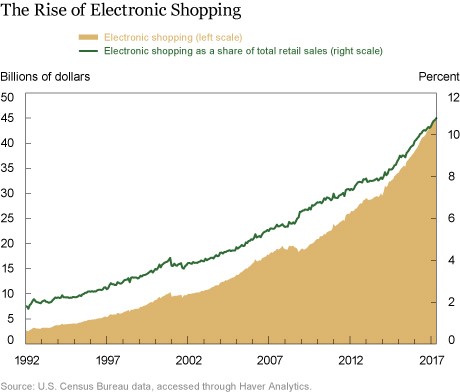 The reason online sales taking market share from in store sales is treated negatively is because there has been a decline in the department store workforce which has accelerated starting in 2012. The chart of labor trends shows that since 2012, the online retail and department store sales stopped being correlated to the business cycle.

Only Some Areas Of Retail Are Weak

The IHL Group chart below easily refutes the claims about how retail is dying. 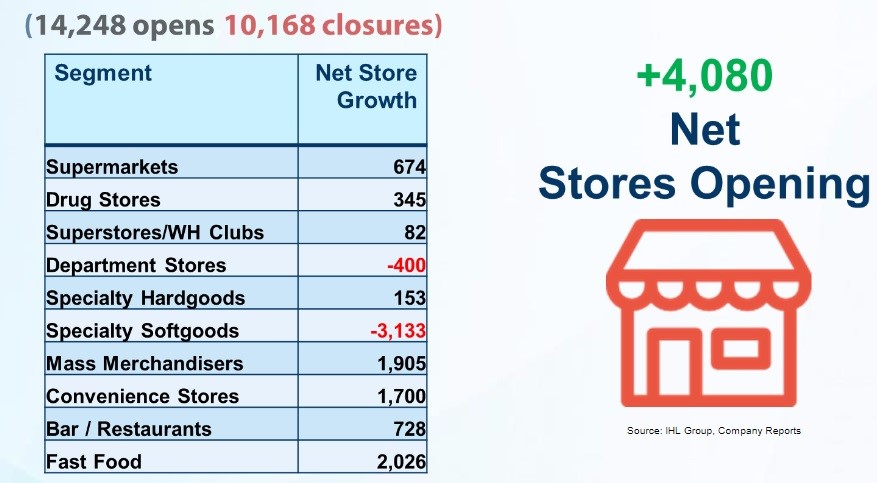 Store Are Being Opened- Not An Apocalypse

There were 4,000 more stores opened than closed in 2017. That is expected to increase to 5,500 in 2018. Let’s review why some areas of retail are seeing weakness because that also helps explain which areas are doing well since one’s pain is another one’s gain. Firstly, low interest rates have led to an over expansion of stores. This situation is similar to oil fracking in that low interest rates helped more frackers drill for oil which increased production, lowering the price of oil and putting some out of business. Too many stores built led to over-saturation. The situation is worse for malls which were built at 4 times the population growth rate since 1975.

Companies who didn’t grow with reckless abandon are doing well. Another group of retailers who are doing well in this environment are fast fashion stores. They lowered the lead time from design concept to getting the clothes in the store from over 6 months to about 3 weeks. That type of competitive advantage gives H&M a leg up on Macy’s. Fashion is a quick business where each season has a specific design which loses popularity after a few months. Getting clothes in the store quickly also lets stores adapt to fashion lines that are doing well. In 2016-2017 fast fashion had about 6-7% sales growth.

Another segment which has done well is discount chains like TJ Max which serves the customers who haven’t seen real wage increases for decades. Finally, the cosmetics industry is doing well as brands like Sephora have created their own stores. This is a problem for the department stores which previously had cosmetic brands’ exclusivity. The complete list below from IHL Group shows which areas were the winners and which were the losers in the first 7 months of 2017. Home improvement has been a clear winner as housing continues to grow in many areas of the US as well as baby boomers who may be upgrading their existing home rather than deciding to purchase a new one. 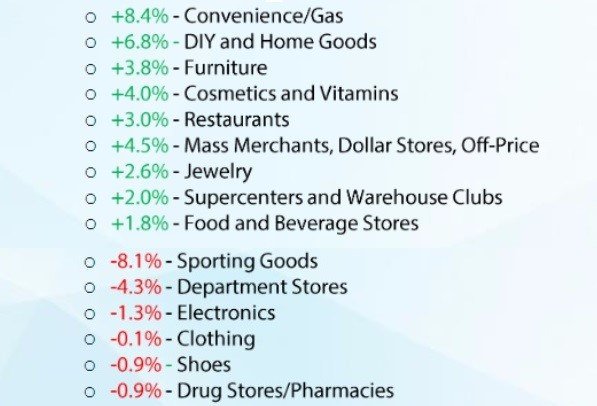 The final point we’ll discuss is that retailers which have invested more in IT have done much better than those who haven’t. Retailers need to use RFID and image recognition to manage inventory and they need to utilize mobile devices to help workers be more efficient. The goal is to enable employees to have the time and capability to properly serve the customers, thus improving productivity and value. Having a knowledgeable employee can make the experience equal or better than online. The IHL Group charts below of IT spending show that leading retailers spend more on enterprise and store IT. 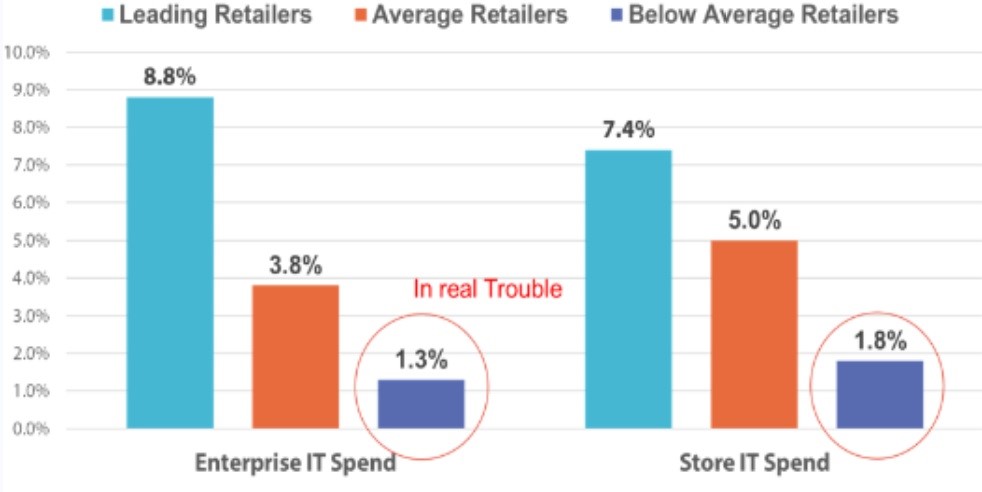 Investing In IT Works Wonders

The growth of online is one of the trends that is affecting retail. However, it’s not an apocalyptic effect. It’s also not even bad for workers who possess the required skills because the new jobs that are being created are higher paying. Secondly, this is great for customers because competition is causing retailers with overpriced, outdated or lack of products to lose market share to those retailers that provider greater value for the consumer. This is a win for everyone other than for poorly run retailers. We may get a nostalgic feeling about Payless going out of business, but the overall retail space looks promising to provide consumers with increased innovation in the years to come.