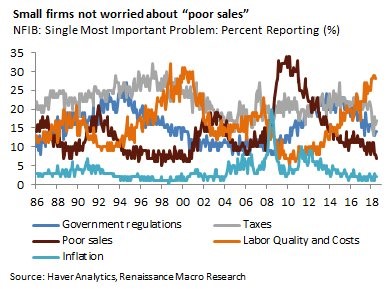 The longer American growth outperforms other international nations in rate of change terms, the more likely it is that the tax cuts, fiscal spending boost, and regulation reform are catalyzing the accelerated expansion. The US economy started improving in the second half of 2016 and has continued its momentum since then. Other nations started growing at the same time, but their growth has declined. This is part of the reason why America is winning the trade skirmishes and the dollar is strong. To be clear, the other reason America is doing well in the trade skirmishes is because it imports more than it exports, so it has more leverage.

Small Businesses Have Near Record Optimism

Small businesses are the engine of economic growth. According to the NFIB survey the environment for small businesses is almost perfect as the 107.9 reading in July was the second best one since the survey started 45 years ago. Only the July 1983 one was higher (by 0.1). Interestingly, in the NFIB small business survey, 60% of the businesses employ 1-5 workers and 88% of the firms employ 19 or less workers. This survey is an ‘on the ground’ summary of how the economy is doing.

It’s important to remember the naysayers who claimed the rise in the small business confidence index signaled the expansion was near its end in late 2016 were completely wrong. It’s important to understand why they were wrong. When you look at the chart in hindsight, it looks like whenever optimism is high, a recession occurs. However, the economy is obviously going to be growing in the expansion prior to the recession. Strong optimism doesn’t mean something bad will happen soon.

Strong growth means the environment is great for business owners. Taxes are low and regulations are growing less, and in some cases decreasing. It’s great news which is sustainable. This isn’t like when investors are exhibiting euphoria and bidding up stocks to bubble levels. This is simply businesses, who have a few workers, saying sales are great and they are looking to expand by hiring new workers. That’s an extremely positive sign which has continued since late 2016. To be clear, it won’t last forever, but there needs to be a catalyst to change the trajectory of the economy. Until there is a catalyst to be negative on growth, record optimism can increase to reach new record highs.

There were three of the ten subcomponents which increased 3 points, helping the index improve marginally. The net percentage of firms with plans to increase employment increased to 23%; the net percentage of firms that expect real sales to increase was up to 29%; and the next percentage of small businesses who think now is a good time to expand was up to 32%. One of the best parts of this report was that small businesses added a net 0.37 workers on average which is almost double the June rate and the highest rate since July 2006. To be clear, a firm with 5 workers adding 0.37 workers is a big increase.

The chart below shows small firms’ biggest concern. Only 7% of firms named poor sales as their biggest concern; this shows how strong the economy is. Only 14% cited government regulations as this administration has made it a priority to cut ‘red tape.’ Small businesses are especially hurt by regulations because they don’t have a team of lawyers telling them how to follow complex regulations which sometimes don’t make sense.

The biggest issue is quality of labor as it was named by 23% of firms.

Many firms are trying to expand and hire new workers, but they don’t want to pay up for qualified workers in this labor market which is quickly coming close to being filled. Finally, it’s noteworthy that only 2% of firms named inflation as their number one concern. The economy is late in the cycle, but inflation isn’t accelerating. The recent decline in commodity prices will help their cause even more.

Motor vehicle sales were up 0.2% and ecommerce sales were up 0.8% in July following a 0.7% increase in June. It’s no surprise that online sales are taking share from in store sales. Restaurant sales have been amazing. The chart below shows year over year growth of slightly below 10% which is very close to the cycle peak. Month over month sales were up 1.3% after increasing 1.6% and 2.8% in the previous two months.

As we mentioned in a previous article, trade growth is slowing. Growth slowed even before the tariffs were enacted, showing us that this is cyclical weakness. The chart below shows the South Korean Kospi index. We look at it because it is a proxy for world trade growth. As you can see, it is at the lowest level since April 2017. It peaked before the tariffs were enacted, but they certainly haven’t helped the situation.

The U.S. economy rode the wave of cyclical improvement from the second half of 2016 to late 2017. Since then, it has been helped by the fiscal stimulus which has allowed it to outperform the weakening global economy. Trade growth slowing signals a cyclical slowdown is brewing while the U.S. whistles past the graveyard. It will be interesting to see if the American economy joins the slowdown once the fiscal stimulus wears off. It also has to deal with rate hikes which could become contractionary very soon.