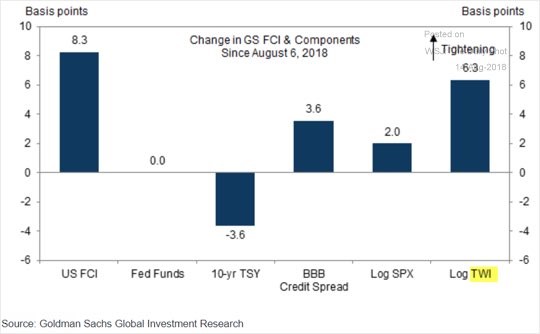 The media has been focused on the Turkish economy which has been sputtering lately, leading to a currency crisis. The word ‘contagion’ has become overused by the media since Turkey is such a small part of the economy. Turkish stocks are only 0.05% of the MSCI all world index. The media has been missing the elephant in the room which is the Chinese economic slowdown. The advancement of America and the decline of China has pushed markets to the brink of major volatility.

As you can see from the Economist chart below, the CSI 300 has cratered while the S&P 500 has increased to near record levels.

While the chart makes it look like the tariffs caused the issues in China, it’s mostly a cyclical problem. However, the weakness does put China in a bad place to negotiate trade deals. In a game of chicken, the loser will be the one in the position of weakness which will crack because the pain is too harsh.

Chinese weakness and American outperformance have caused the dollar to rally which is hurting commodity prices. Furthermore, other emerging markets are feeling the pain. Even though America is the largest economy in the world, because it grows slower than China, it can’t make up for China’s weakness. China will make up 31% of global GDP growth in 2018, while America only makes up 11% of GDP growth. The chart below shows the sharp decline in both the Chinese Yuan and the Shanghai Composite index.

The Shanghai Composite is down 23.46% since January 26th. You can say the American economy has caused a wide divergence because it is outside the loop of the global cycle. America extended its cycle with fiscal stimulus through the tax cuts and spending boost.

The strong dollar could be the undoing of America because it hurts export growth and international profits. The chart below shows that the increase in the trade weighted dollar has been the biggest reason the Goldman Sachs financial conditions index has become more stressed.

The Fed funds rate has had no effect, possibly because interest rate policy hasn’t become contractionary yet. However, rate hikes are part of the reason the dollar is strong; everything is related. To be clear, financial conditions are still very loose. If conditions become tight, a recession will occur because lending won’t be able to drive business expansion.

China Is A New Tail Risk

The Merrill Lynch survey below shows the biggest tail risks the market faces. Those are the risks not being priced in which could have a major impact on the market.

It’s somewhat dubious to have a survey of tail risks because the entire premise of a tail risk is it comes out of nowhere. Either way, the Chinese slowdown has entered the fray as the 3rd biggest tail risk in August 2018. China has been slowing for years, but it had a respite in 2017 as growth was solid.

As we mentioned earlier, the weakness in China makes it more likely that it will lose the trade battle with America. The fact that one country has a weak economy means the trade battles can end sooner than later because the stronger nation can quickly increase the pressure through tariffs to force the weaker country to comply. It could be a positive catalyst if the compromise ends with lower trade barriers.

Let’s review some of the changes to the market we mentioned earlier. The price of oil is about to be down 7 weeks in a row, the Vanguard emerging markets ETF is at its lowest level since July 2017, gold is down 10.99% year to date to an 18 month low, and copper is down 22.49% year to date. Emerging markets drive economic growth; global growth will slow even if America accelerates. Weak commodity prices hurt the materials and energy sectors. Energy earnings are a small part of the S&P 500, but their growth has been important in 2018 because it is in the triple digits, making it a big part of overall year over growth. That growth won’t continue if oil prices fall. Finally, low commodity prices mean low inflation which could force the Fed to hike rates less.

Either this scenario can end poorly as the dollar’s increase eventually slows the US economy or it can end well if the Fed becomes more dovish. In the first scenario exports weaken and trade growth weakens. That has been occurring as global trade growth was 5.7% in January and below 3% in May. The second scenario would be the Fed halting rate hikes because inflation is low which ends the dollar rally and supports domestic growth as the fiscal stimulus is about to wear off.

Let’s review the details of the Chinese slowdown now that we’ve reviewed its affects on the overall economy and markets. Chinese retail sales of consumer goods were up 8.8% in July which is 0.2% below June. The top 50 retail stores had a 3.9% decline in sales. Consumer weakness has been amplified by the fact that Chinese consumers are over leveraged because of expensive housing. The chart below shows prices for newly built homes were up 5.8% in July which was the fastest increase since September 2017. That’s not welcome news to the Chinese who had a 107% debt to income ratio as of the end of 2017.

Investment in fixed assets was only up 5.5% from January to July which is 0.5% below the January to June rate and is the slowest rate since the stat started being calculated in 1995. Investment in infrastructure was up 5.7% which is 1.6% below the January to June figure. Regional governments and state run banks want to lower their debt. Exports were up 12% in July, but tariffs showed their mark as U.S. tariffs on robots caused export growth to fall from 35% in May to 7% in June and 6% in July. Finally, unemployment in the top 31 cities in China was up 0.3% to 5% in July which is the highest rate since December.

The market is in a phase change as commodities and emerging markets are cratering. That could eventually be bad news for America as trade growth slows and the strong dollar hurts international profits, hurting the S&P 500. China is an obvious risk to the economy and markets; don’t let the financial media misdirect you into focusing on the Turkish currency crisis.