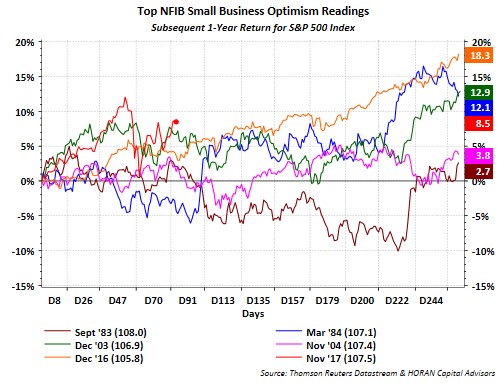 The purpose of this article is to objectively examine regulations and the impact on the economy. While there will be discussion of government policy, our review is not negatively nor positively inclined towards any particular administration.

Many in the United States are in favor of increased regulations, however the unintended consequences of these laws aren’t fully understood – otherwise we wouldn’t repeat the same mistakes of the past. When a problem is reviewed, the solution is usually a new rule to outlaw the behavior. Unfortunately, you can’t outlaw bad things from happening. Whenever a negative event occurs, it’s easy to get the urge to fix the problem, but it’s rarely considered that the government doing less could help solve the problem. As the popular saying goes, less is more.

Trump Is Working To Cut Regulations 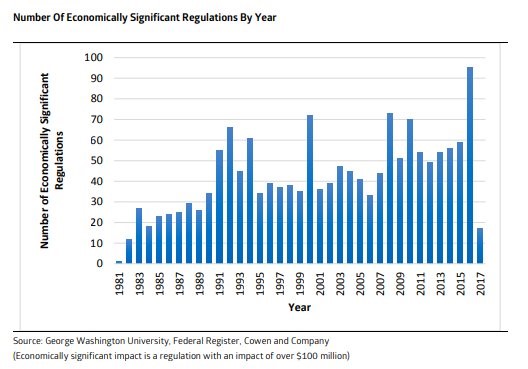 Hopefully, this trend continues because one year of results won’t be enough to turn around the economy unless regulations are cut. The fine print shows the regulations included in this chart are ones with an impact of over $100 million. It’s a big task to slow down regulations because the trend has been up for 3 decades. The number of newly enacted regulations in 2017 was the lowest since 1982.

The chart below compares the number of economically significant regulations enacted by month in the first year in office of the past 4 Presidents. 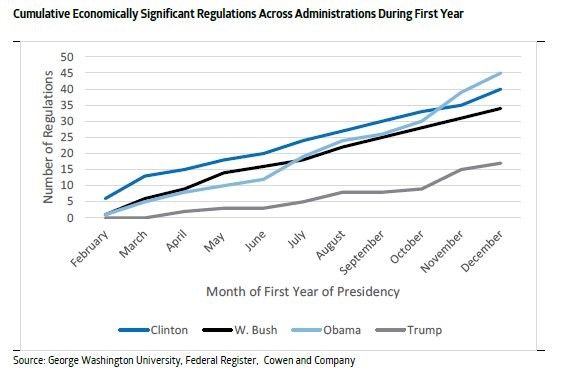 Increasing Regulations Has Been A Bipartisan Effort

Increasing regulations has been a bipartisan agreement until President Trump was elected. As we mentioned, he hasn’t completely met his promise to cut regulations, but the fact that he campaigned on the issue and is somewhat following through is a good sign. The bad aspect is that deregulation will be the blame when there’s another inevitable recession. Since the labor market and the yield curve indicate the business cycle might end in a few years, this deregulation is coming right before issues arise. Deregulation tends to occur at the end of the business cycle because businesses’ complaints start to get heard and the public forgets about the last crisis. The real lesson would be to recognize that regulations aren’t the savior from issues; rather they sometimes cause them. However, we’re stuck in this regulation cycle until that lesson is learned.

Bipartisan End To Parts Of Dodd-Frank

As we wrote in a previous article, Dodd-Frank was a massive slew of regulations that hurt the banks’ ability to lend. The regulations went so far, they forced community banks to go out of business. This is like taking a drug that’s too powerful. That drug kills the disease, but it also kills the host. Unfortunately, because Dodd-Frank killed off so many small banks, it made the big banks even bigger, increasing the systemic risk.

The good news is that Trump isn’t the only person in Washington who sees the negative consequences of Dodd-Frank. In mid-March 2018, the Senate passed a bipartisan bill that passed in a vote of 67 to 31 which rolls back some of the most onerous parts of Dodd-Frank for small banks. The House still needs to vote on this bill. It is in favor of rolling back the regulations and wants to go further than this bill. The difficulty lies with keeping the Senate Democrats on board.

Specifically, the bill would raise the threshold of which banks are considered too big to fail from $50 billion to $250 billion. This eliminates mid-sized banks from undergoing yearly stress tests. The opponents of this provision claim the small banks also took bailout money. However, some mid-sized banks were forced to take the loans, so that’s not a fair criticism. Another change is this reform exempts banks which have total assets less than $10 billion from the Volker Rule which prevents them from making bets with their money. As you can see, the government is so worried about the banks that it regulates what they can do with their own money. It never considers that the financial industry being the most regulated one in the economy is actually causing increased risks. The final major change this reform makes is it eliminates the need for small banks to report to the government detailed data on who they lend to. This can lower the costs for small banks.

The result of the lowered regulations is extremely optimistic for small businesses. In February 2018, the small business optimism index increased 0.7 points to 107.6 which is the highest the index has been since 1983. This isn’t about the economy because real GDP growth per capita isn’t close to being the highest since 1983. 32% of businesses said now is a good time to expand and 43% said they expect conditions to improve. The chart below goes back until 1986, but it doesn’t show the full scope of how great this report was. Since it was started in 1973, this was the second best report. Small businesses also love the tax cuts. The best way for the economy to have sustained growth is for small businesses to thrive. 2017 was the best year in the history of this report. 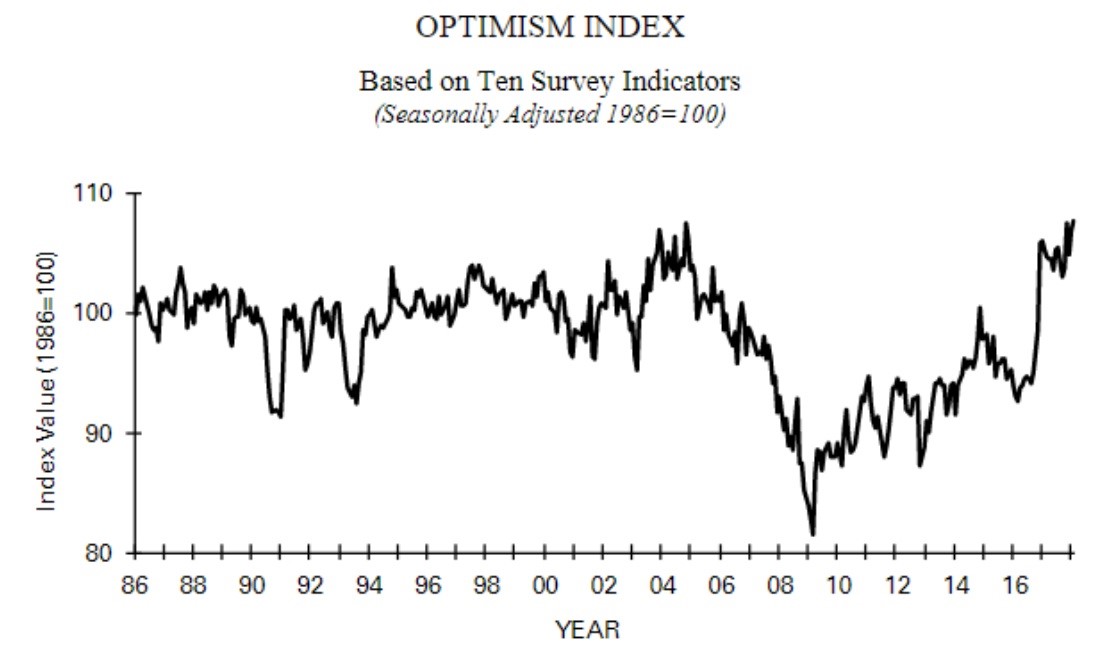 Contrarian investors claim optimism is a bad sign, but that’s not true. The chart below shows the subsequent one year returns of the S&P 500 after the NFIB small business optimism index hits a high. As you can see, stocks are always up. They increase an average of 9.7% with three years having double digit returns.

Trump’s effort to eliminate regulations hasn’t been a complete success, but he did slow the growth of them. Combined with the tax cuts, small business optimism is near a record high. Even better news is that there is bipartisan support to eliminate some parts of Dodd-Frank. Unfortunately, this might not be a long term trend because deregulation generally occurs at the end of the business cycle. Government often intervenes most during recessions due to public outcry for more regulations, which may address problems of the past that become evident to everyone, but create with them new problems for the future.