The Labor Divide Between Cities & Rural 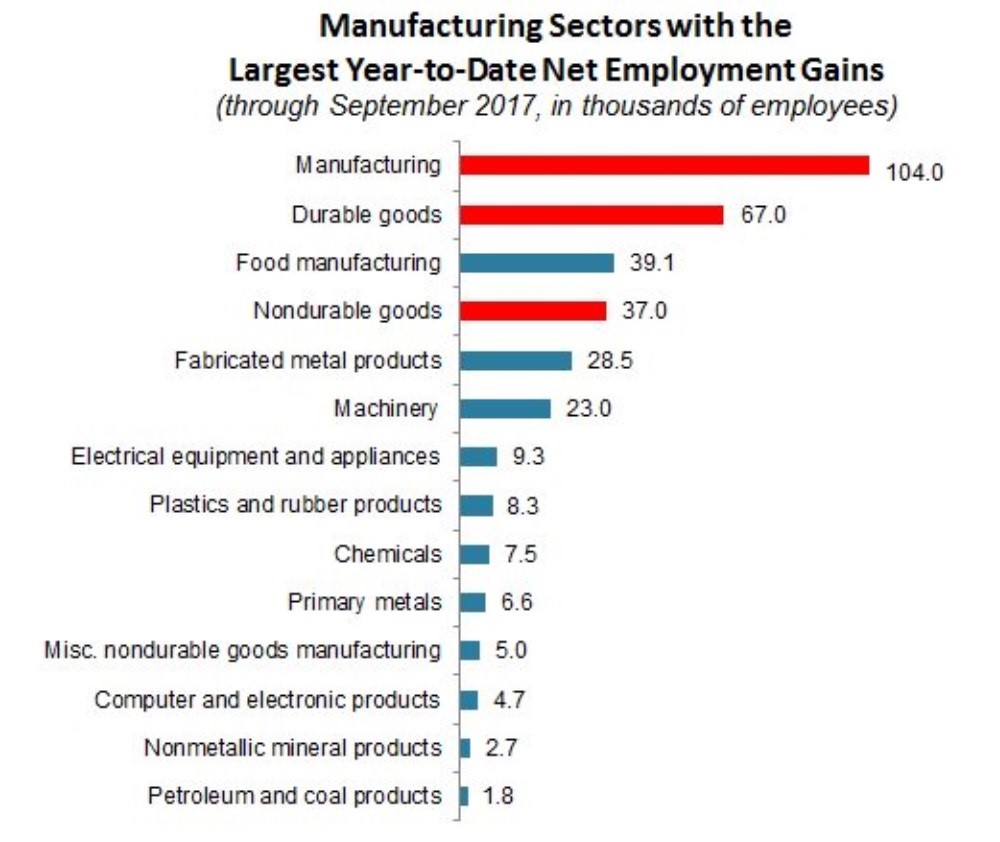 There is a lot of talk about the increased inequality between the rich and the poor, but there’s less attention paid to the differences between cities and rural areas. This divergence played a key role in President Trump’s victory as he carried states like Ohio with much wider margins than expected. Now that these rural folks have been heard in the voting booth, it will be interesting to see if their problems of economic mobility will be solved. Surprisingly, it looks like rural economies are seeing improvement as a new manufacturing cycle is emerging. The global economy is improving, being led by China’s economic economy nor is Brazil acting as an anchor on emerging market growth.

President Trump’s removal of some regulations helps manufacturing, but the main catalyst is the cyclical nature of the economy. Regardless of political rhetoric, rarely does the government provide solutions to any problem without creating another problem. One issue the private sector can’t solve is government deficits; that’s why the issue gets kicked down the road. Politicians aren’t able to make difficult choices that could hurt their constituents in the short-term, subsequently affecting their chances of reelection.

The chart below shows the recent divergence between rural areas and cities which has occurred in the past decade. 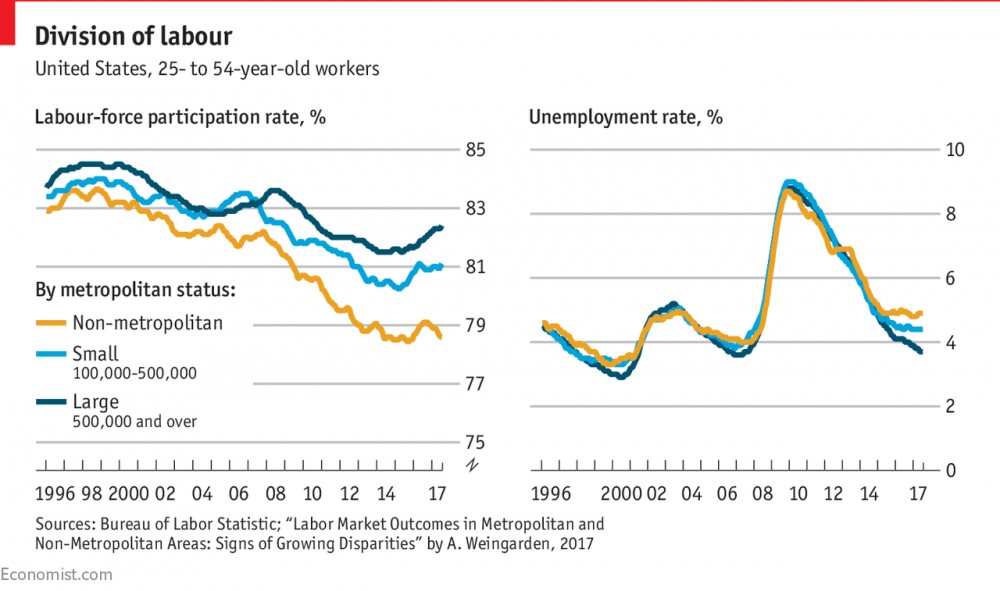 Rural Areas Have The Most Slack In Their Labor Force

The labor force participation rate is the lowest for non-metropolitan areas, in the middle of the pack for small cities, and the highest in large cities. Demographics play a part in explaining why the labor force participation rate is lower this cycle. It accounts for most of the issue, but not all of it. Given this demographic adjustment, the cities are back to normal. It appears most of the explanation for the lower than expected labor force participation rate lies in the rural areas. The unemployment rate chart shows cities have fallen below 4% while rural areas hover near 5%. This is an important difference because it means the cities are operating at a labor shortage, while there’s still slack in the labor market in rural areas. This means the wage hikes are mostly being received by the workers in the cities.

This trend has been in place for about 10 years. It played a major role in the 2016 election because Trump was the first candidate in the past few election cycles to notice the cracks in the fabric of the economy which ties the Midwest to the rest of the country. To clarify, this article is not in favor of one political party over another. As we mentioned, the main improvements in manufacturing in 2017 aren’t coming from his policies. However, we can clearly see why Trump’s message of focusing on the ‘forgotten man’ resonated with so many voters outside the major cities.

Speaking of the major cities, the chart below shows the concentration of US industries in the top 4 metropolitan areas as a percentage of the total metropolitan GDP. 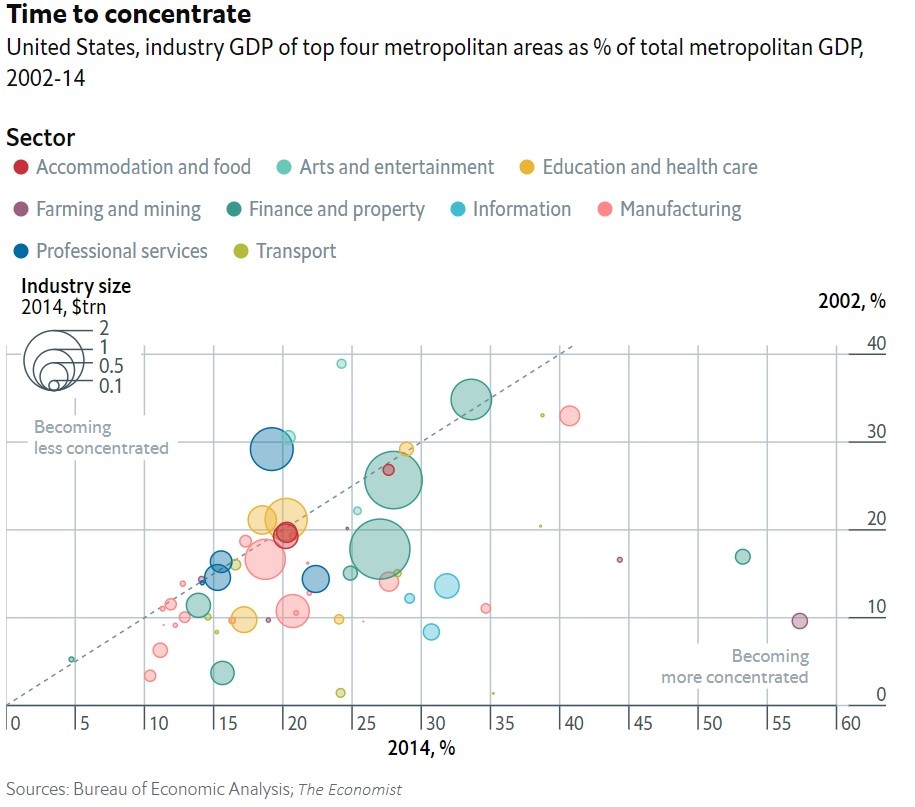 The bubbles represent the size of the industry and the colors coordinate with the sector of the economy. The y axis shows 2002 data and the x axis shows 2014 data. The further lower and to the right a bubble is, the more concentrated the industry got. The oil and gas extraction industry and securities, commodity contracts, and investments industry were the ones which became the most concentrated. Anything below the dotted line got more concentrated. The important aspect to keep in mind about this chart is it compares the top cities to the total. This isn’t about the city versus rural areas. This is about the biggest cities versus the mid-sized and smaller ones.

Globalization plays a factor in these changes as the Asian economies employ workers for cheaper wages than workers in the Midwest. However, it’s important to not blame globalization like some politicians do. The benefit of lower priced products exported to America makes up for these job losses. The problem is this globalization affects people differently, pitting them against each other. Sadly, the benefits of free trade, without any treaties or tariffs, is lost on all parties. Instead of destroying free trade with tariffs in an effort to get jobs back, one alternative could be relocating from a rural setting to a city, where it appears jobs are more plentiful. In fact, manipulating free trade is more likely to cause harm in the long-term as many of these jobs affected by government intervention are likely to see increased efforts to become automated in order to save costs for companies. The “less is more” approach is the best way to view impediments to the free market.

It’s amazing how the timing of economic cycles affects elections. If the Brazilian economy didn’t go into a depression in 2015-2016 and the Chinese economy had a soft landing earlier than 2017, Trump wouldn’t have had as strong of a campaign message. As we mentioned, the manufacturing economy is doing as well as it could be right now. The ISM Manufacturing report in September showed a PMI of 58.2. That’s consistent with 5.5% real annualized GDP growth. That GDP growth rate is over double the fastest growth rate this expansion has seen in a year. The chart below shows the manufacturing industries with the largest job gains year to date.

Manufacturing Jobs Are Plentiful In 2017

The total growth is 104,000 jobs. The weak areas which hadn’t had a great recovery and were particularly pummeled by the 2015-2016 manufacturing recession are seeing a reprieve.

Hopefully this article explained how politics and economic trends mix to create outcomes that could have been altered if the timing was slightly different. There has been weakness in rural America for quite some time, but the manufacturing recession certainly added to Trump’s election message which was that rural areas had been left behind by politicians who were focusing on big cities. This cyclical recovery brought about by global trade will help some of these people living in rural areas get jobs. It’s ironic that the free trade which is bemoaned by many for stealing people’s jobs is bringing them new jobs in 2017.

The devil is always in the details. Yes, manufacturing has declined in the US over the past few decades, however there is a resurgence in manufacturing that demands high skilled labor, something the US is in shortage of. As the economy changes it brings about new demand for different skills. The moral of this article is that if you are waiting for help to arrive from politicians, whether it be in the form of tariffs or by any other means to bring back jobs, its likely to only backfire in the long-term.