Italy Could Create Its Own Currency 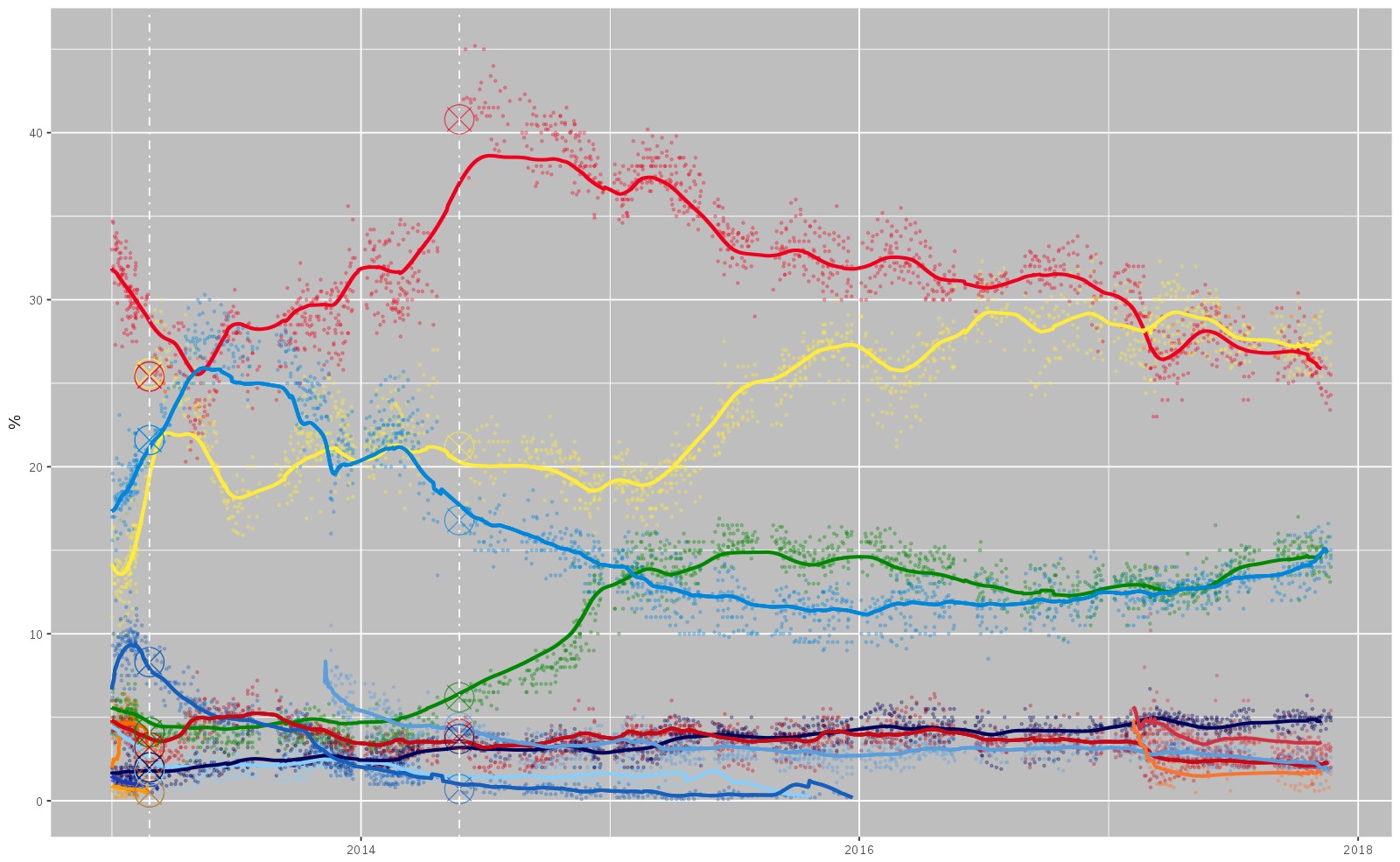 Usually when the economy is performing poorly this creates turmoil in politics, which can even lead to war. Italy is the fourth largest economy in Europe, therefore its direction is an important driver for the Eurozone. At first glance the Italian economy is doing well. The chart below indicates that while Italy is growing below the rate of the EU, it has recently accelerated to near the highest growth rate since the global financial crisis. 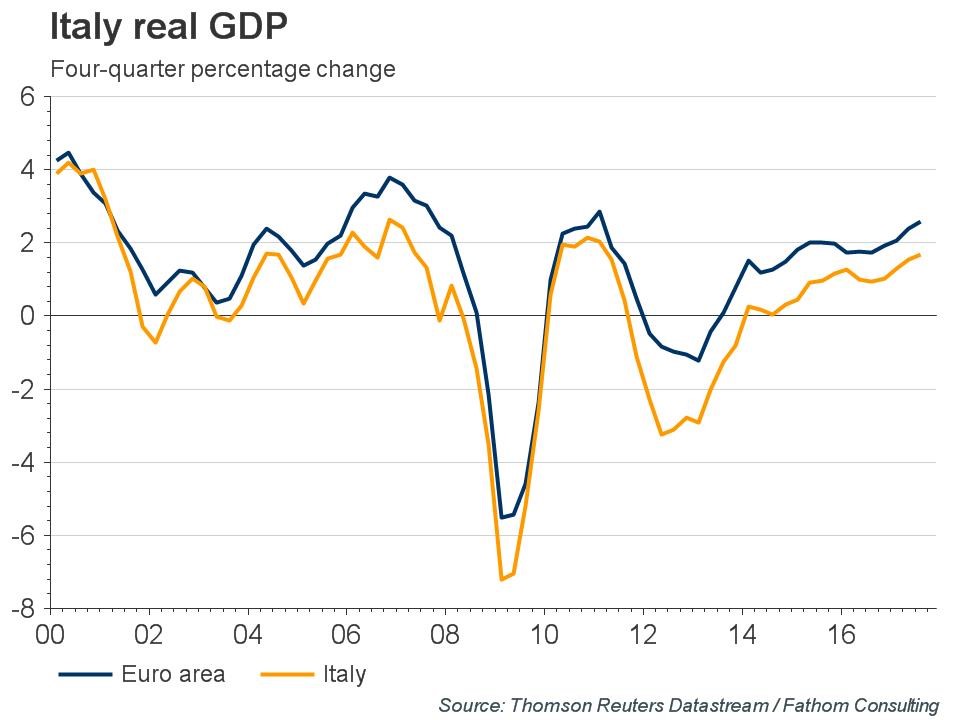 However, there is severe political discontent among young people particularly in Sicily who have not witnessed all the benefits of this recent economic growth, akin to blue collar America. Since no other countries joined the U.K. in its efforts to leave the EU, it has been thought that the global phase of populism has faded, but that ignores the recent trends in Italy which we will review in this article.

Southern Italy Is Not Growing Like The Rest Of The Country

The Italian youth and Sicilians haven’t benefited from the improvements in the economy in the past few years. The images below breaks down the northern and the southern unemployment rate as well as the difference between the overall number and the rate for those ages 15-24. 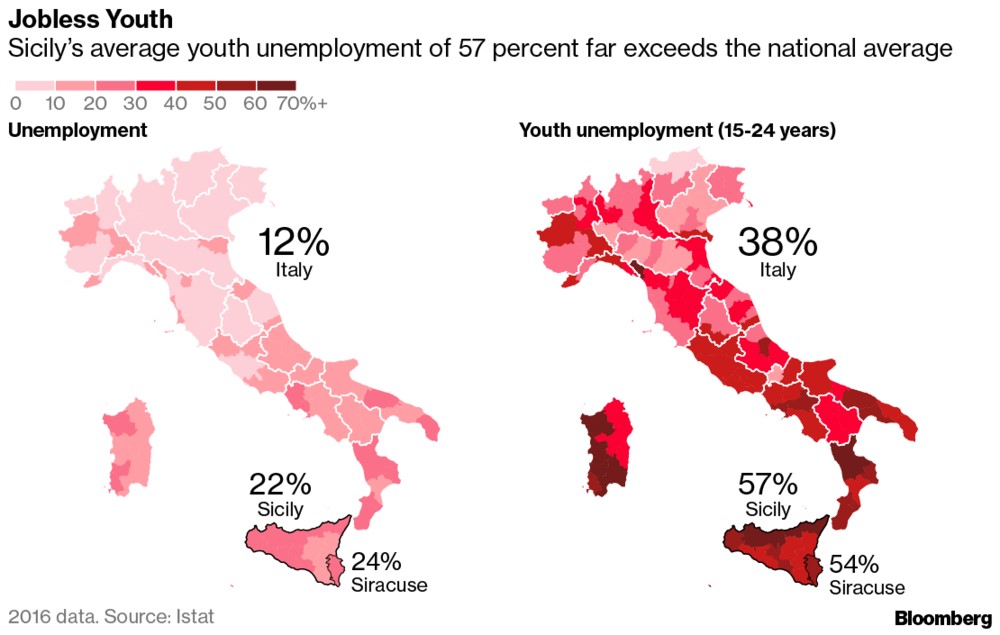 Sicilians & The Youth Are Struggling To Get Jobs

The unemployment increases towards the southern part of Italy, with the Sicilian unemployment nearly twice the national rate. The second image shows that the youth unemployment rate is over 50% in most of southern Italy. Because the job market is so bad, those with marketable skills are leaving to find jobs in other European countries.

This new trend in people migrating from southern Italy in search of jobs has been supplanted by an incoming wave of migration, especially to Sicily. Whether Sicily is the least economically capable of taking in migrants or Sicily’s economy is doing poorly because of the 70,000 migrants which came ashore in 2017 alone is not clear, however regardless of the cause, many people are suffering in this region. This immigration issue pushes Italians to be opposed to the EU because they feel they are dealing with the brunt of the immigration crisis without being adequately helped. 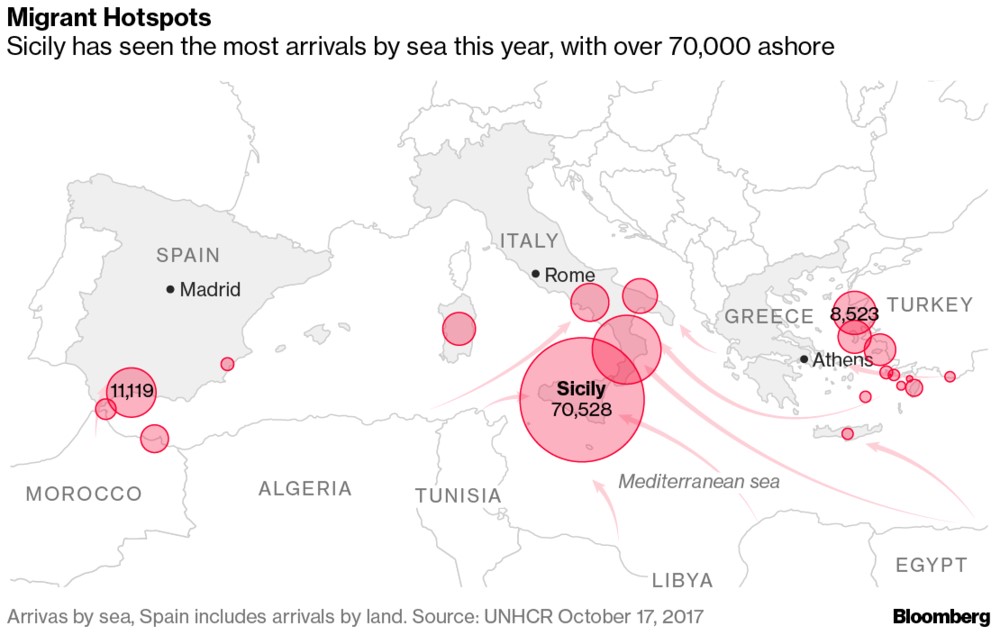 Sicily Is Taking In The Most Migrants

Primarily because of increased unemployment among the youth in Italy, there has been a disconnect between youth in Italy being opposed to the EU in increasing numbers versus the youth in other EU countries, which has been largely in favor of the EU. Adding insult to injury, from the perspective of a young person in Italy, it doesn’t help the EU cause that there constant calls from the EU for restrained fiscal spending to solve the high debt to GDP ratio in Italy which was 132% as of 2016. When a large percentage of Italians can’t get a job and hear politicians make the same promises only to see the country remain in crisis, it’s easy to desire change. Just to be clear, this article is not in favor or opposed to any view point other than to review the current situation in an effort to best understand the trend and potential outcomes.

The four polls below give you an idea of where the young Italians stand on the EU.

The Youth Want Italy To Leave The EU

5% more Italians under the age of 45 support leaving the EU over remaining in the EU. Before arriving to any conclusion about the prospects of that actually happening, keep in mind Italy’s demographics. Its population has been shrinking since 2012 and the median age of the country is 46.3. The other polls show young Italians are pessimistic about the direction of the country, blaming the EU for the situation, and less than 50% think reforms can make the EU work for Italy. Based on this data it could be concluded that a large majority of young Italians have become populists in their viewpoint.

The reason we’re discussing this trend in the political system in Italy is because the country will have a national election in March 2018. There is an increasing possibility that Italy is trending towards potentially exiting the EU at some point in the next few years. Before that occurs, right wing populists need to win elections and enact changes that their campaign has run on. We got a taste of how Sicily will vote in the national election because it had a regional election in November 2017. Unsurprisingly, the right wing 5 Star Movement did the best, earning 26.67% of the popular vote. Forza Italia won 16.37% and the Democrats earned 13.02%. Historically, the Democrats have been the dominant party in Italy. It’s an establishment party which supports the EU. The chart below gives you an idea of where each parties’ voters stand on Italy staying or leaving the EU.

Breakdown Of Where Each Parties’ Voters Stand On Italeave

The Northern League is a right wing party in the north, so it didn’t factor in the Sicilian election, but it will be important in the general election.

The chart below is the latest national poll results in the past few years.

Latest Polls Have The 5 Star Movement In First Place, But Far From A Majority

The red line is the Democratic Party. They have been fading as Euroscepticism increases. The yellow line is the 5 Star Movement which has been stable. Both the Northern League (green) and Forza Italia (blue) have been gaining in the polls recently. In theory, the right wing movements (5 Star & Northern League) could form a coalition government, but that isn’t likely. Another interesting dynamic is that in the past few years, the right wing parties have moderated their stance towards leaving the EU. Instead, 3 of the top 4 Italian parties support a parallel currency which the Democratic Party opposes.

Based on this article, there seem to be several plans which include Italy staying in the EU, but that also introduce the potential of a parallel currency. One proposal suggests what appears to be an internal currency issued by the Italian government which it will use to pay suppliers, workers, and pensions. The new currency would also be used to pay taxes. The big question is if the EU would allow this. If it doesn’t, then the right wing parties may need to support Italeave to satisfy their voters. The other plan is the Italian government issuing what the Northern League party calls mini-BoT. Mini-BoT is a short term interest free small sized government security to be used as a currency to pay government suppliers, taxes, and social security.

Both plans are the intermittent steps between the right wing winning the 2018 election and an outright Italeave. Besides the right winning in 2018, they would also need to create a coalition government afterwards. Something that complicates this scenario and increases the risk of Italy leaving the Eurozone is the ECB being unable to help Italy in 2018, forcing the country and zombie corporations to rely on the free market to service their debts as we have discussed previously.

As we summarized the situation in the previous article:

…to explain the potential strife Italy will face when the ECB tapers its bond buying. The country won’t be saved by the reinvested bond buying as not many of its bonds mature in 2018. Zombie companies might need to face the free market in deciding bond yields, potentially hurting the Italian economy even further which has been weak for the past few years even as the E.U. has recovered, adding an additional catalyst to entice Italians to want to leave the E.U. The potential for increased risk in volatility of asset prices in the EU, stemming from the imbalances posed by Italy, could have significant repercussions for investors in 2018.

To be clear, the intent of this article is not to suggest that Italy will or will not leave the the EU, but to discuss the unfolding scenarios and potential risks that exist and how this could shape the discussion that will unfold in the coming months.