The Debt Is High, But Does It Matter? 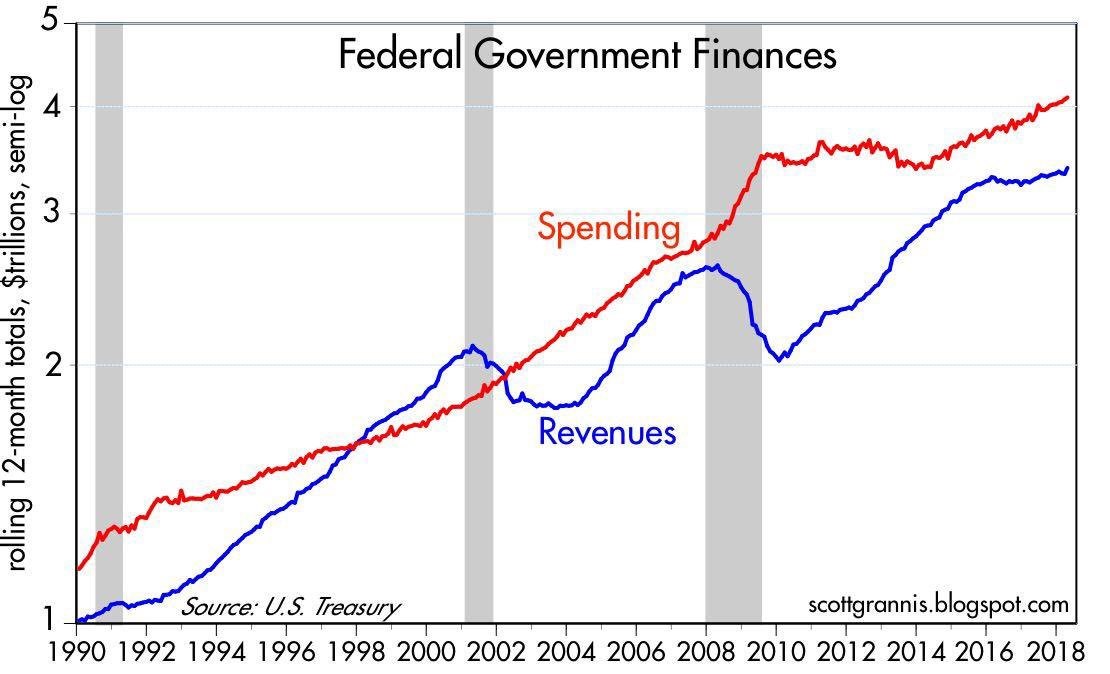 The US stock market has been on a fantastic run in 2018 even though returns are close to the historical average because other markets have seen weakness. As you can see from the chart below, US stocks underperformed last cycle and outperformed this cycle.

Some of this relative performance is caused by China as the Shanghai Composite is now at the lowest point since 2014. Emerging markets have had a weak 2018 with the iShares MSCI Emerging Markets index falling 12.56% this year.

As you can see from the blue bars in the chart above, the Bank of America Merrill Lynch survey shows fund managers were mostly underweight U.S. stocks last cycle and have been mostly overweight this cycle. You can see the turnaround from late 2017 to mid-2018 where fund managers recently went from being underweight US stocks to being overweight.

Once the global synchronized economic expansion ended, investors needed to find the winners. America has been a big winner this year as growth has been strong partially because of the tax cuts. With lower taxes, repatriated capital funding record buybacks, and an economy which still has momentum, there is a great recipe for outperformance. The U.S. market did well in 2017, but so did almost every other market, so there wasn’t outperformance.

The chart below brings us the most updated information on the relative weighting of global fund mangers according to the Merrill Lynch survey.

Fund managers are the most overweight America as it has the highest z-score. Even though a huge part of America’s outperformance this cycle has been catalyzed by the tech leaders like Apple and Alphabet, tech has a slightly negative z-score as the FANG names have underperformed this quarter. Quarter to date, Amazon is the 95th best performer in the S&P 500. Alphabet is 287th best, Netflix is 447th, and Facebook is 490th.

The Rally Might End In The Next Few Quarters

America is in an interesting position because its outperformance could be in jeopardy since stocks tend to underperform when valuations are high and the unemployment rate is low. The two key points we look at are the prime age labor force participation rate and the rate of change of analyst estimates. Valuations matter more when estimates are falling, and a full labor market will lead to wage inflation which ends the business cycle. When the economic momentum shifts, there will be a sharp reversal. We’ll update you on those stats and the yield curve to help you time the end of the cycle.

This cycle is unique because consumers have deleveraged which means the next recession shouldn’t be that problematic for them. It certainly won’t have the same high default rate on mortgages seen last cycle. Since consumers drive GDP growth, this gives you less reason to fear the end of the cycle. Consumer’s biggest asset (their house) is not likely to see its value implode in the next recession to the same extent as during the 2008 financial crisis.

Corporations also aren’t in trouble especially since earnings growth has increased remarkably in 2018. Don’t be fooled by the corporate debt to GDP ratio because American corporations are more global than before. The relationship to US GDP is irrelevant. The biggest concern investors should have are covenant lite loans because they are a black box. Covenant lite loans didn’t have a higher default rate than their counterparts last cycle, but this time is different because they have become much more common.

The debt this cycle is on the U.S. government’s balance sheet. As you can see from the chart above, right before the recession in 2001, there was a surplus. Right before the 2008 crisis, there was a deficit, but it shrunk. This cycle the deficit was falling up until 2016, but since then revenues collected stabilized and spending soared. The unemployment rate is still low and the jobless claims to labor force ratio is at a record low. If the deficit is rising in this environment, imagine how bad it will get in a recession. The situation is bound to get worse because of entitlements. The recent spending increase made a bad situation even worse.

The debt situation is painted as easy to understand by each side of the debate. Austrian economists believe the deficit is horrible and will cause the dollar to lose value. The MMT believers think the government should spend more money because the deficits aren’t a problem. The truth is in between those two points.

If high debt was a problem, it would have caused some trouble in this period. It’s wrong to suggest the high government debt made the 2008 crisis bad because it was consumer debt that was the problem. The MMT believers don’t know the tipping point where debt becomes a problem, yet they think the government should spend more money. You can look at the currency crisis in Venezuela to see how governments are far from infallible.

The government is bloated with debt this cycle unlike consumers and corporations, but it’s not clear if we are near the tipping point. If the government doesn’t hit the tipping point soon, there’s not much evidence to suggest the next recession will be devastating like 2008 or the Great Depression. The chart below shows entitlements have become a big expense while defense spending has fallen as a percent of GDP.

Entitlement spending growth suggests without reform the tipping point will be hit at some point in the next few decades.

It’s disconcerting to see everyone so heavily invested in America as its fund manager z-score is high and it has outperformed global stocks this cycle, particularly in 2018. There could be a recession in the next few years, but the prime age population rate and corporate earnings growth don’t show any signs of near term problems. This cycle government debt is more problematic than corporate debt or household debt. If the American government has a debt crisis, it will be a disaster, but even with the current high deficit, it may not occur this cycle or anytime in the next decade. However, that doesn’t mean the government should spend with reckless abandon, and it doesn’t mean you should overlook this as a factor in your investing framework.