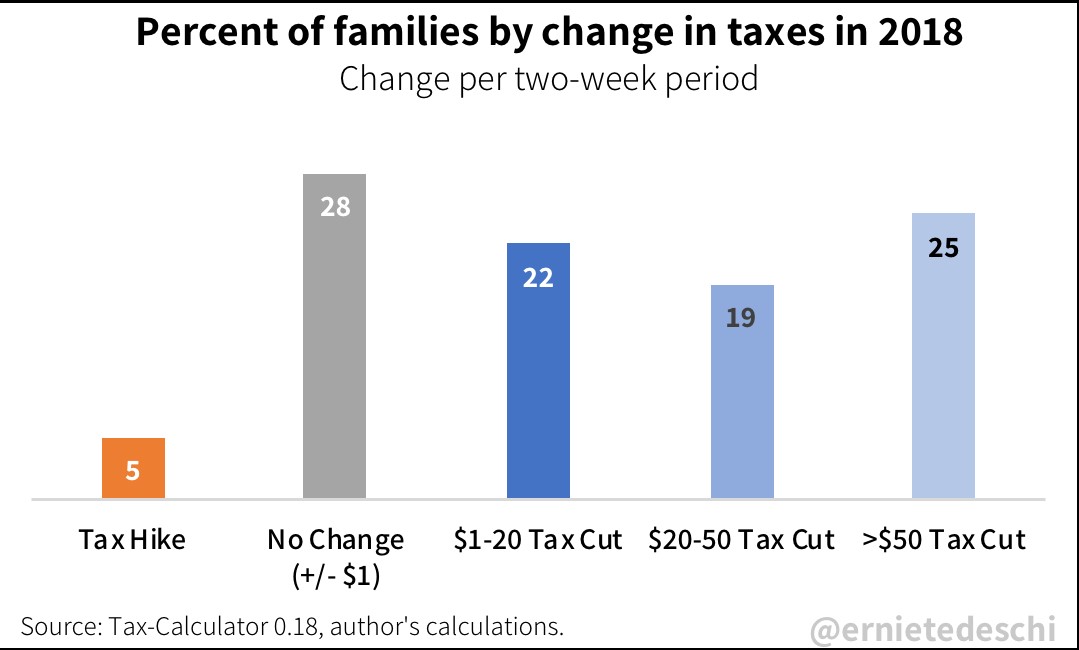 The Congressional Budget Office released its latest projections for the budget and the economy for the next 10 years. This is non-partisan analysis which is why it has a lot of credibility; politicians love to cite it if the CBO’s analysis on their proposals is positive. The headline of this report is that the federal debt held by the public as a percentage of GDP is expected to hit 96% in 2028.  The CBO has been predicting a continuation of the heightened debt to GDP ratio seen in the chart below for a few years. This latest report is special because it includes projections made about the latest spending plan and Trump’s tax cut. We’ll take a look at some analysis on the tax cut which explains why some families haven’t made a dramatic change in their spending habits. 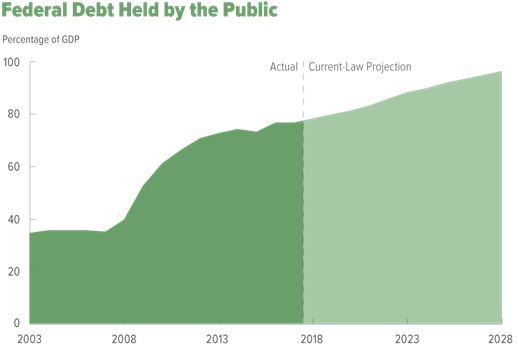 High Interest On The Debt A Problem

There are some economists who believe the debt isn’t a big deal. This philosophy on debt and deficits has been supported by the fact that there haven’t been clear tangible negative effects of the high debt yet. The U.S. government has been supported by low interest rates. The interest payments are the most distinguishable part of the budget which show how the high debt is hurting the country. If interest rates increase and the interest payments on the debt grows exponentially because the debt is increasing, other important functions of government will have their budgets squeezed, not to mention the increased burden placed upon tax payers.

Modern Monetary theorists purport that unlimited deficits can be run, but these high deficits would be a strong signal that the private sector couldn’t survive without extreme help from government (tax payer) sponsored bailouts. The current mixed economy can’t run without a strong private sector. Printing currency to pay the interest on the debt would cause significant price inflation; it’s a much different situation than QE which didn’t spike the M2 monetary supply because the money put into the system when the Fed purchased government and mortgage bonds was hoarded by the banks to improve their balance sheets. QE was a monetary policy aimed at stabilizing the financial system. Printing currency to pay back the debt would be a fiscal policy executed by the central bank. Thinking the government can create unlimited currency to pay for its expenditures because the Fed did QE is a fundamental misunderstanding of what QE is.

The CBO projects interest rates will increase as it expects the Fed funds rate will increase to 4% by 2021. The table below shows the costs of various government expenditures. The net interest payments will exceed the spending on defense in 2023 and it will exceed all non-defense spending by 2025. There will be a debt spiral if interest rates continue to go up which increases the (technical) default risk of America. That possibility is far out for now, but the US doesn’t want to be in a situation where its budget only makes sense with near-record low interest rates. One of the reasons foreign governments buy U.S. treasuries is that the US dollar is the foreign reserve currency. If the dollar loses this status because of the high deficits, it will hurt demand, bringing up treasury yields which will squeeze the budget, devastating the economy. 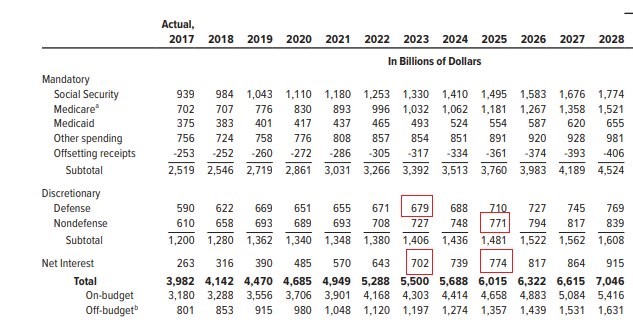 Interest On The Debt Explodes

The CBO raised its 2018 GDP growth estimate to 3.3% from 2% in 2018 because growth will be helped 0.3% by the Trump tax cut and 0.3% by the recent spending bill. The Federal Reserve expects 2.7% GDP growth, implying that the CBO estimate is overly optimistic. The tax cut is supposed to help U.S. GDP by 0.6% in 2019 and the spending bill is also expected to boost growth by 0.6%. The CBO’s forecast for 10 year average growth was raised from 1.8% to 2%. As you can see from the table below, the CBO’s expectation for the tax law to contribute 0.7% to economic growth in the next 10 years is more optimistic than most of the private sector estimates. The effect on growth isn’t expected to diminish over time which is a great sign. The tax law is expected to help create 1.1 million jobs over the next 10 years. 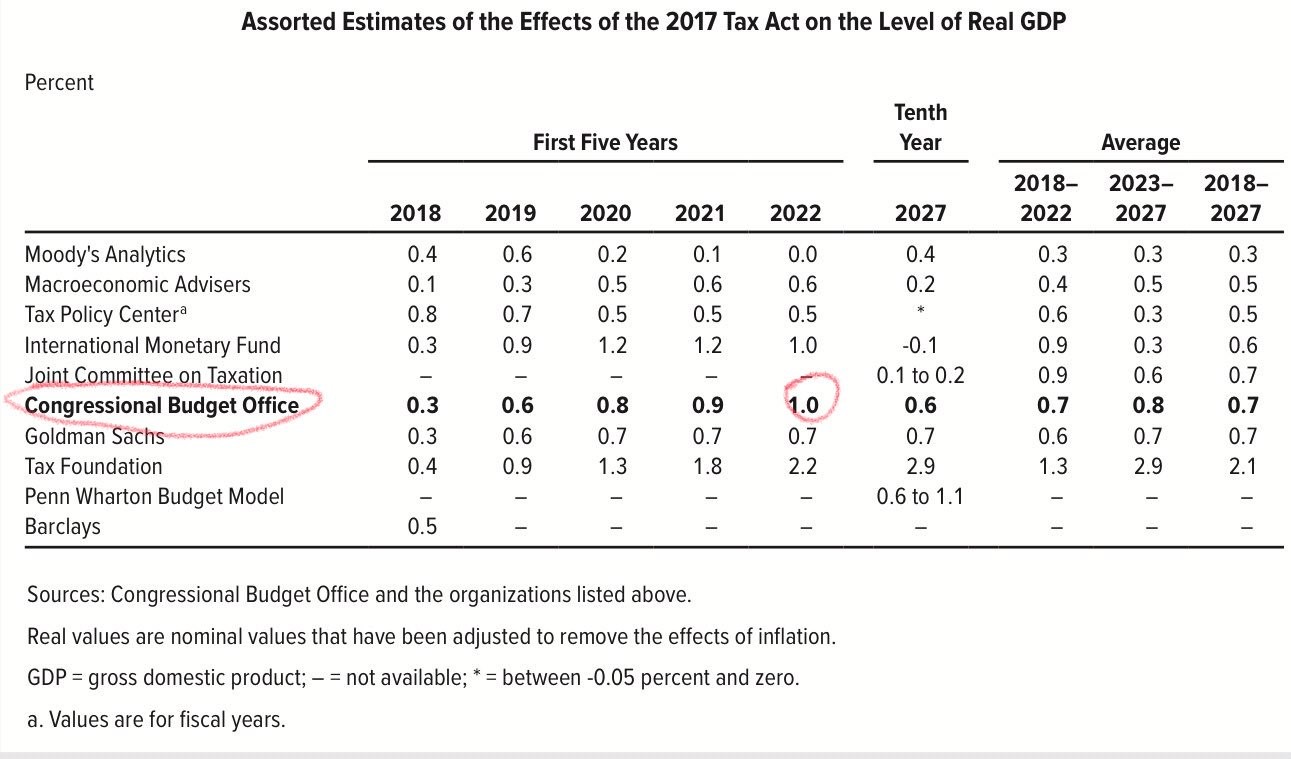 The tax law is expected to add $1.9 trillion to the debt over the next 10 years. This includes dynamic scoring which is when the model includes the positive effect of the increased growth the law causes. Higher growth means more taxes paid and less need for government help. The dynamic effect is $400 billion to $500 billion over the next 10 years. The projections in the next 10 years don’t include a recession. It’s unlikely that the U.S. will go 19 years without a recession; that would be a record streak. From 2020-2024 the real GDP is expected to be a few tenths below the potential GDP, but growth is never expected to fall below 1%, so its estimated that there will be slowdowns, but not a recession.

The Benefit Of The Tax Cut To Families

So far, there hasn’t been a major boost in retail sales like we’ve seen in corporate earnings estimates after the analysts began including the effects of the tax law in their numbers. The explanation of this lack of an increase is seen in the chart below.

2 Week Impact Of The Tax Cut

50% of families will see a $20 or less tax cut in a 2 week period. Only 25% of families are getting a $50 or greater benefit in a 2 week period. The effects of the tax cut should increase over time as the money saved begins to build up for families. This is different from corporate earnings estimates which are modeled out right away. Stocks probably priced in the tax cut before the analysts updated their numbers.

The CBO came out with its projections for the next 10 years which include the effects of the tax cut and the spending plan. The latest plans are extremely negative for the government’s budget. This will eventually lead the debt held by the public to be greater than the entire economy, which by certain measurements is already the case. It’s unlikely that the government will ever become fiscally retrained, but there might be some motivation to cut spending when the interest payments further eat into the budget because of higher interest rates.