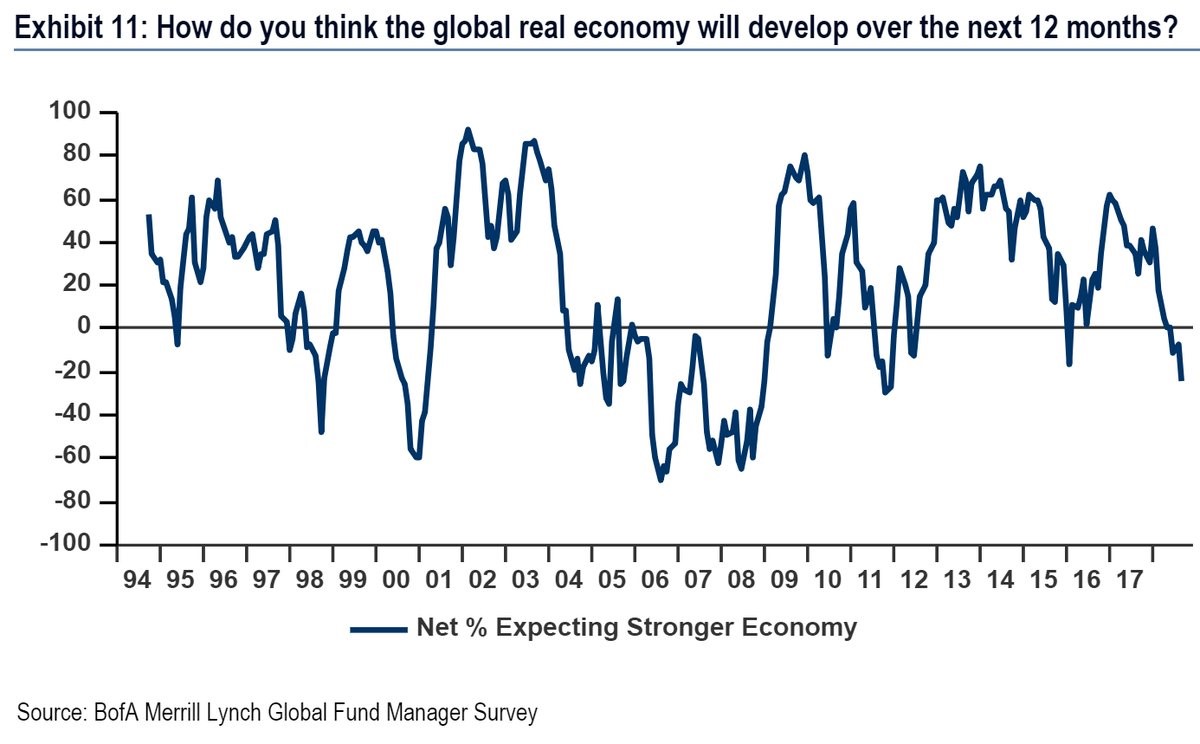 With the US stock market near its all-time high and having a solid year, it’s easy to miss out on the global growth deceleration. The global economy is by no means terrible, but it has seen deceleration as the global synchronized growth narrative disappeared, with emerging markets feeling a significant burden from the new reality.

The chart below shows the Bank of America Merrill Lynch fund manager survey.

The net percentage expecting improvement in global real growth in the next 12 months is the weakest since late 2011/early 2012 when it briefly fell because of the sovereign debt crisis centered in Europe. Optimism is even worse than late 2015/early 2016 when many feared America was about to fall into a recession and Brazil was in the midst of a depression. Sometimes mini shocks to the system have made fund managers look late, but they were correct to be mostly bearish on the global economy for the next year from 2006 to 2008.

Rate of change is important when studying economics. It’s worse to go from great growth to good growth than okay growth to bad growth because there’s more room to decline because expectations are higher in the first case. The Global Composite output fell from 53.7 to 53.4. While this doesn’t seem terrible, 4 of 6 components fell and the trend has been lower ever since the peak in early 2018. There were similar results in the August JP Morgan Services index as output fell from 54 to 53.5 and 3 components fell, 1 was flat, and 2 improved.

It was once promised by the White House that after one trade deal was done, others would come easier. However, the reverse has occurred. After the deal with Mexico, a deal with Canada hasn’t been struck and tensions have escalated with China. The tariffs have impacted specific commodities such as metals, but haven’t impacted consumer prices enough to increase overall inflation. The catalyst for the global slowdown and weakening trade growth isn’t the tariffs. However, they will contribute by further decelerating growth.

The first real act which pushes this up from a trade skirmish to a trade war was when Trump announced a 10% tariff on $200 billion worth of Chinese goods on September 17th. This was a strong action because he said he’d raise the rate to 25% by the end of the year if no deal is made and threatened an additional $267 billion worth of goods to be taxed if China retaliates. The Chinese Commerce Ministry already said the next day after Trump’s announcement that China must retaliate. China then instituted a tariff on $60 billion worth American goods at a rate of between 5% and 10% starting on September 24th.

The U.S. economy has been outperforming as it has been helped by the tax cuts and improved investing environment. While everyone might not be seeing real wage growth, jobs are plentiful which improves people’s confidence in their personal financial situation which drives spending growth. The tariffs up until this latest announcement haven’t been large enough to hurt the economy yet, but they certainly haven’t been helping either. It’s bad news for political leaders to appear brazen in a game of chicken as both parties get hurt if neither gives up.

American Farmers Are Getting Hurt

President Trump signed a $6 billion bailout of U.S. farmers because they are getting hurt by the tariffs. This is only the beginning of the problems which will be felt in a trade war. It’s scary to consider the possibility that the tax cuts were used to help the consumer deal with rising prices. The $250 billion in Chinese goods that are being taxed is about half the goods purchased by America. Adding $267 billion gets us over the total goods the US buys from China, which is its largest trade partner.

As you can see from the Bloomberg chart below, U.S. farmers aren’t getting great prices for their soybeans while Brazilian farmers are because China is shifting to purchasing Brazilian soybeans.

To be clear, the basis price is the difference between the spot price of the deliverable commodity and the futures contract of the same commodity.

Soybean exports to China are very important to American farmers. This end market is being taken away by the China’s retaliatory actions. As you can see from the Federal Reserve Bank of St. Louis chart below, soybeans are over 50% of American exports to China.

The chart shows the civilian aircraft, electronic integrated circuit, and motor vehicle industries will be affected by this trade war if it continues.

The tariffs could hurt 2019 American GDP growth by 0.4%. China isn’t in a great position to be in a trade war because its economy is decelerating. The Shanghai Composite index is at its lowest level since 2014. The chart below shows the slowdown in retail sales growth, factory output growth, and fixed asset investment growth since Q2 2017.

Fixed asset investment growth in China was only 5.3% in the first 8 months of the year which was the lowest growth rate since at least 1995 and the 5th consecutive record low. Weakness in exports caused by a trade war would make this situation worse.

America is in a better position to deal with a trade war than China, but not having one is the best outcome. The US consumer will be hurt by higher prices. While the US stock market has outperformed global stocks in 2018, that can change if the trade war continues. China could lead emerging markets lower if its export growth is hurt by a trade war. For the first time since Trump was elected, we have a sizeable tariff which will impact the overall numbers instead of just specific industries. America can’t just trade with Mexico. It needs its top two trading partners, China and Canada.