Buybacks Are Better Than Dividends 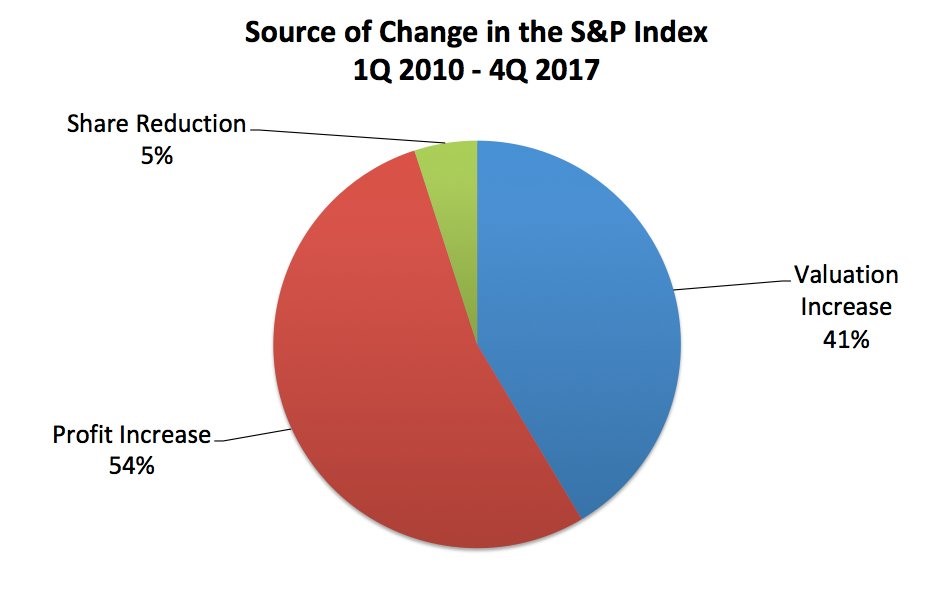 Retail investors are in love with dividends more than they should be with significant fan followings and discussion forums online dedicated to the worship of dividend stocks. Clearly, dividends are seen as important because public companies love to brag about how consistent their dividend payments have been and how much they’ve raised them. Dividends are beloved because they give investors the allure of safety. Retail investors feel that a dividend payment is secure which means the investment is secure. However, in the financial crisis, dividend stocks fell about the same amount as the S&P 500.

To be clear, dividend payments are more secure than buybacks because companies know investors hate when dividends are cut. Investors don’t care as much about buyback cuts, so buybacks are the first to go in a downturn. Firms give themselves a cushion by paying relatively low dividends to be sure they won’t need to be cut in a recession. One other way dividends make investors feel good is that the yield goes up when stocks fall. Obvioulsy, stocks which don’t have dividends also get cheaper when they fall, but dividend yields make investors feel like there’s a floor under the stock. That is true as long as the dividend isn’t cut. Dividends look amazing when they are raised over time; the yield on an investment made years ago can be in the double or even the triple digits.

On the other hand, buybacks don’t seem to have the same fan following, and in fact have a lot of negativity surrounding them, which we believe is misplaced. Even though buyback payments are more volatile than dividends, it’s still wrong that investor focus so much on dividends at the behest of buybacks. These dividend loving investors focus on DRIP or dividend reinvestment plans. If the money is just being invested back in the company, buybacks are way better because of favorable tax treatment. Dividends are taxed when investors get them, while capital gains are taxed when the stock is sold, allowing for the compounding of the gains over time. 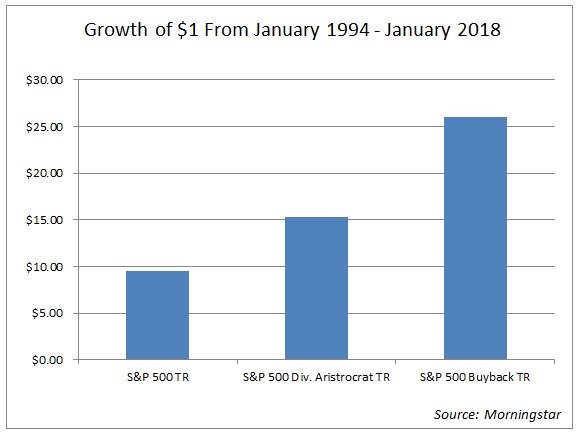 Instead of being loved, buybacks are actually hated by some investors. They believe that buybacks cause stocks to move up and down in a more violent fashion. The main example used is what took place during the 2008 financial crisis as buybacks reached records and then fell along with the stock market. However, the buybacks didn’t cause stocks to fall. Stocks fell because of the financial crisis. Buybacks were utilized the most in that cycle, which adds to the narrative that they cause volatility. However, buybacks stagnated in 2017 while stocks rallied. It appears based on the total buybacks and the buybacks as a percentage of market cap, that firms are being less aggressive with them in this cycle. That hasn’t prevented stocks from having amazing performance. The one situation where buybacks are a bad idea is if firms get too aggressive and then have a liquidity crisis causing them to issue new shares at a lower price. That’s what happened in 2008. It has tainted buybacks since for many investors. Dividends were also raised in the bull market and cut during the crisis, but they didn’t get blamed for causing the crash. 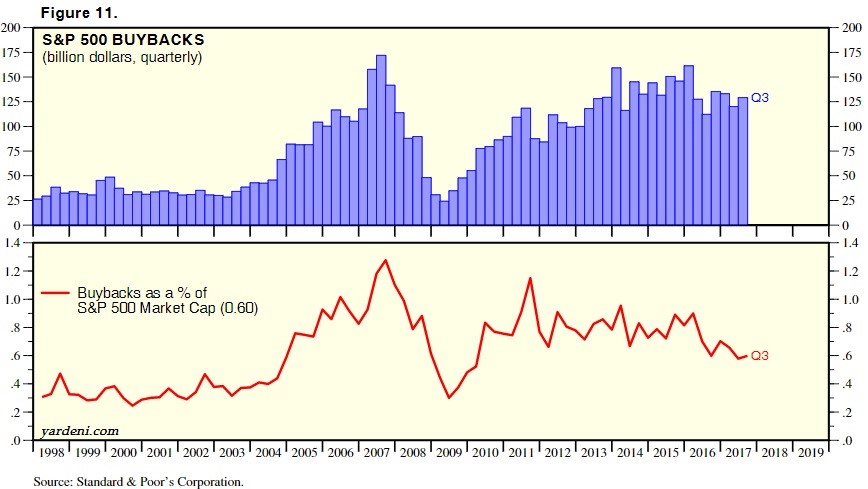 Cause Of The Rally In Stocks

The most skeptical investors claim that this entire bull market has been created by firms taking out leverage to buy back stock. This implies the market is an unsustainable bubble. The reason investors fear this is happening is because management teams can decide to juice the stock with buybacks to increase their pay. While that’s not a good idea for the long term, CEOs don’t stay in their positions for that long. The average departing CEO in 2016 lasted only 9 years in that position. That’s shorter than this current bull market. The pie chart below destroys this fear. As you can see, from Q1 2010 to Q4 2017, only 5% of the rally was caused by share reduction. 54% was caused by profit growth and 41% was caused by multiple expansion.

Source of Change In The S&P 500 Index

Cause Of The Boost In Earnings

The other fear investors have about buybacks is they boost earnings per share numbers ‘artificially.’ In this scenario, firms will buyback a certain amount of stock to boost EPS to exceed estimates. While that can happen, investors aren’t fooled by this. Investors know to look at revenue growth to tell if the business is doing well. Management can’t hide behind buybacks for long. The chart below destroys the narrative that earnings growth is coming mainly from buybacks. 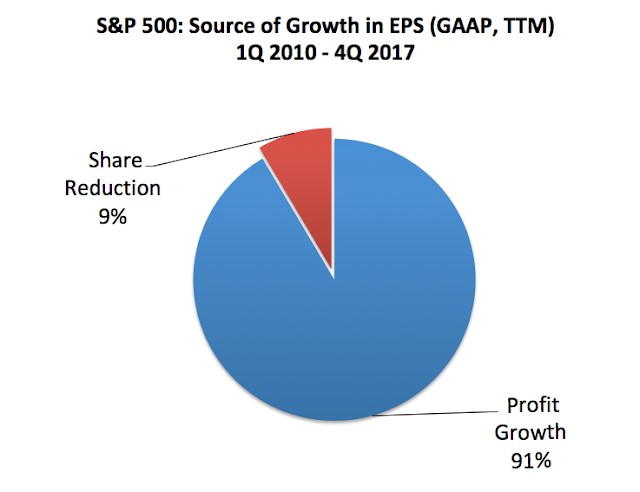 Another point worth noting is that firms tend to barely beat results more than they barely miss them because of guidance that’s too pessimistic. Analysts go along with the game as they base their estimates on what the company is saying. If the quarter is going poorly, the bar is often lowered. That’s why you need to follow earnings estimate trends. These shenanigans are more of an issue than buybacks.

There is a cult of investors who follow dividend stocks. However, firms with buybacks have done better. Clearly, there is an overlap as many firms have both cash return plans. If you are investing in an index, consider the S&P 500 buyback fund instead of the S&P 500 dividend aristocrat fund. Buybacks also have preferential tax treatment to dividends. We busted the narratives that buybacks are causing stocks to be in a bubble and that they are the only reason behind the boost in EPS growth.

If you are interested in reading more on the topic of buybacks, here are two articles we recommend: