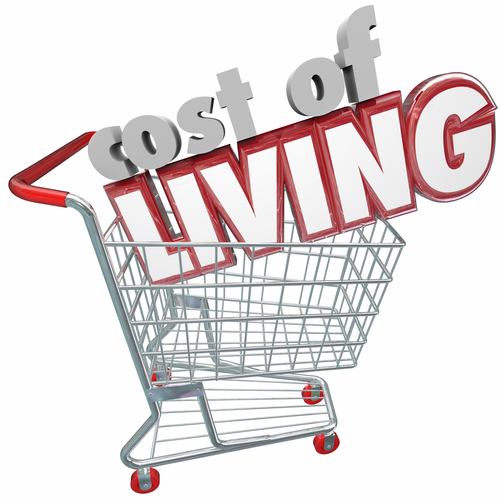 Many libertarian leaning people who follow Austrian economics consider themselves skeptics. That viewpoint stems from the idea that neither the left nor the right are advocating for their interests as well as the concept that the general media is deceptive. While it can be argued that misinformation is put out in most fields, with economics being no exception, it’s important to not be overzealous with skepticism. There’s a fine line between being critical and being overly skeptical. Being critical is taking every piece of information you read with a grain of salt. That means determining if the thesis is logical and the methods are non-biased, then doing research to check the authenticity of the report. Being overly skeptical is assuming everything you read and listen to is wrong and not verifying your biased assumptions.

When you assume everything in the establishment media and economic circles is wrong, you’re no different than someone who puts blind faith in what they read. It’s overly simplistic to think everyone is wrong about everything when it comes to economics and personal finance. What we try to do on our website is bridge the gap between some establishment projections and Austrian economics in an effort to understand reality. No one side has the claim on absolute truth, therefore you can often find truth in the middle, the so called gray areas. It would be easy to automatically discount information put out by organizations such as the Federal Reserve or banks as completely wrong, but the reality is a lot of smart people work at these institutions. While you may not agree with some of their models or philosophy, there is still information that these institutions provide that can help us objectively reach the truth. When you claim everyone is wrong, you’re either a genius or a fool.

Discounting all research put out by the banks and economists doesn’t push the ball forward. It doesn’t build a conversation. If you act pugilistic towards Keynesian economists or more practical investors who don’t have an economic philosophy, then it doesn’t build a conversation. Some in the libertarian community legitimately want to move away from society because they have so much distrust for everyone. However, it’s best to have conversations with people you disagree with to learn from them. This is why we engage in conversations on Twitter with the likes of Neel Kashkari who is the President of the Federal Reserve of Minneapolis. When people heckle him and he doesn’t respond, it doesn’t make much progress for anyone. Even worse is when criticisms which aren’t the best are made; this limits their power. Sometimes people who make poor arguments can actually convince people that they are wrong.

The tweet sequence below is an example of not the best arguments being used. Zero Hedge, which often messes with axes to prove points, showed a slide from Citigroup when asking Neel Kashkari if the goal of quantitative easing is to lift asset prices. Neel provided a quick quip saying any chart can be tortured to prove a point. There’s no doubt he dodged the question, but he does have a point because the chart on the left is complex and has one of the y-axes going in the opposite direction. It’s important to not leave Neel with an opening to say something like that. Regardless of your opinion of the Fed, the likes show that Neel won that conversation because poor arguments were used. 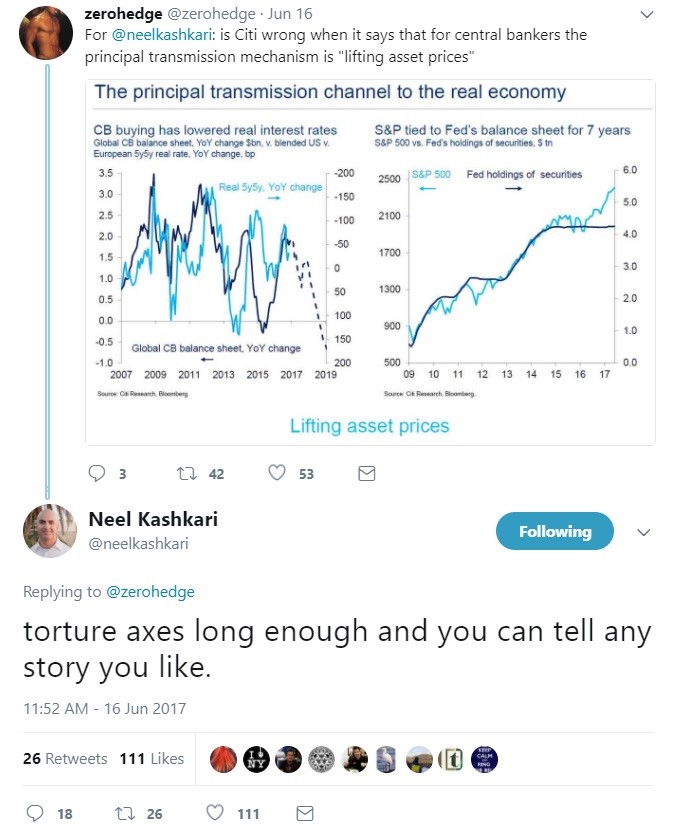 One example of an adjustment is when the Atlanta Fed measures wage growth it takes out top coded earnings of more than $150,000 per year because they will show up as having zero growth, which is unlikely. Top coded earnings are earnings that exceed a certain level which are relayed at that level, so if someone earns $200,000, it still counts as $150,000. The reason the data is adjusted is math, not some conspiracy. The calculations made are often explained for transparency like the Atlanta Fed does in its wage growth tracker. The Atlanta Fed even has a calculator that lets you input your own data to create your own calculation of what the Taylor Rule should be. If all data presented by governments was manufactured, then all data would always come out to meet or exceed expectations. Whereas for the past years the Fed has been perplexed by price inflation as measured by CPI being lower than their stated target of 2%. Therefore, you can argue that the methodology for compiling data is inaccurate or could be improved, but solely disregarding it as conspiracy is a flawed argument that does not advance the discussion towards improving the process.

It’s popular to hear Austrian economic forecasters make the claim that price inflation metrics can’t be trusted because your basket at the supermarket costs more. While this is true, a lot of that has to do with a decrease in competition, rather than an increase in the velocity of currency. The financialization created by quantitative easing has forced many smaller companies to either go bankrupt or to be consolidated under bigger brands. As such, this has increased the pricing power for large brands, hence why they are witnessing the highest profit margins on record. It’s fine to make the claim that price inflation is higher than the CPI shows, namely because the CPI is a poor measure of price inflation in the first place that has been changed countless times over the past decades, but using anecdotal evidence that this is a conspiracy is inaccurate. The models economists create are as flawed as the individuals themselves. This applies to both sides of the aisle.

There’s credible research on both sides of the economic spectrum, Keynesian and Austrian economics. However, both sides also have a large number of poorly made research that is littered with flawed arguments. Therefore, as the motto of our website goes, the truth is generally somewhere in the middle. Do not disregard any claim that disagrees with your preconceived notions. Instead, attempt to understand anything and everything, in order to always question your own beliefs in an effort to form a well thought out conclusion. No one benefits from people believing faulty arguments that appeal to their biases. Everyone benefits from a debate where both sides listen to each other and make relevant counter points instead of talking past each other in sound bites, which is what we see in the media.

At the end of the day:

It ain’t what you don’t know that gets you into trouble. It’s what you know for sure that just ain’t so. -Mark Twain