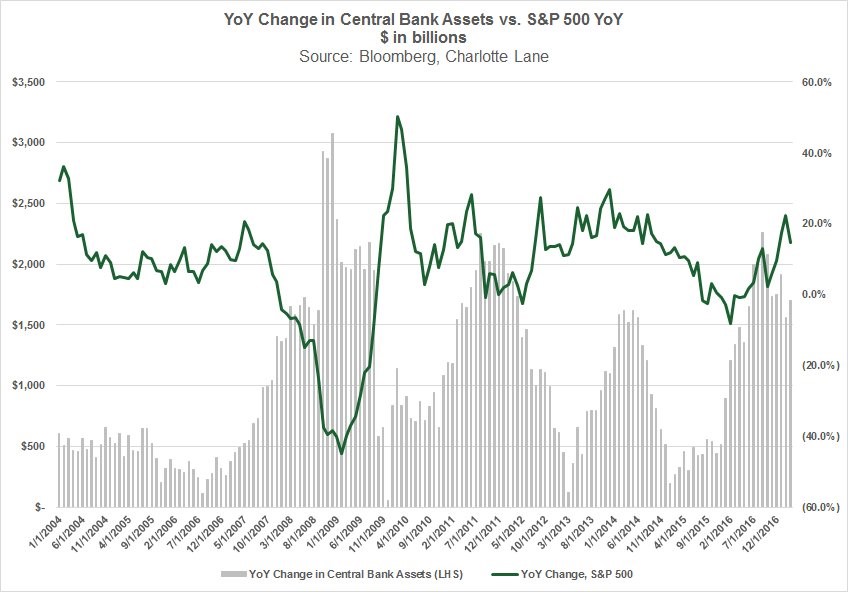 The economy was on the brink of recession in early 2016 and global coordinated central bank action helped prevent a crisis. Every time the Fed ‘kicks the can down the road’ it makes the inevitable situation worse. The further asset prices get from their intrinsic value, the worse the correction to fair value will be. A recession in early 2016 would have been bad, but the debt has risen since then making the situation more precarious than ever before. The rationalization of delaying the inevitable is either short term thinking or legitimate belief that central banks can outlaw recessions. Neither make much sense if you realize that rising interest rates will catalyze economic weakness because of the large amount of debt accumulation.

The first concept which needs to be proven is that the early 2016 economy came close to a recession. Obviously, there needs to be evidence of economic weakness to show how the Fed juiced the economy with temporary stimulus. The chart below shows the Bloomberg U.S. Financial Conditions Index. The sharp decline in early 2016 was brought about by oil falling into the $20s which was partially responsible for the earnings recession in 2015. 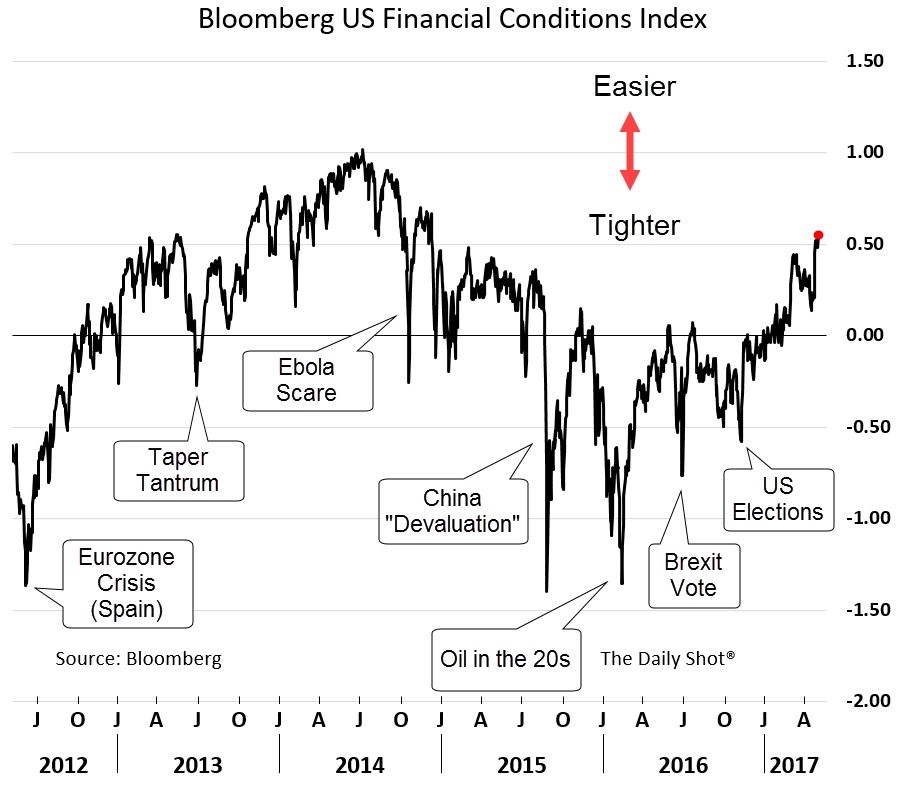 It’s important to recognize that the economy is interconnected. Weakness in one sector spreads to others. Oil firms had skyrocketing default rates and record low recovery rates. The recovery rate is the amount of money bondholders get back if the business defaults on loans. When a firm goes bankrupt, the bondholders receive the assets the firm has left. The equity investors of regularly traded common shares are usually left with nothing. Skyrocketing defaults impacted credit markets. The economy runs on credit. Banks aren’t going to be as willing to give out loans if they see the potential for a spike in oil related bankruptcies. Tightening lending standards is what causes a recession, which means the crash in oil prices could have started a recession. If you think energy is a small market, remember that housing was thought to be a small market before it caused the financial crisis in 2008.

The chart below gives further evidence of the potential recession which could have occurred in early 2016. It shows corporate profits as percentage of GDP. 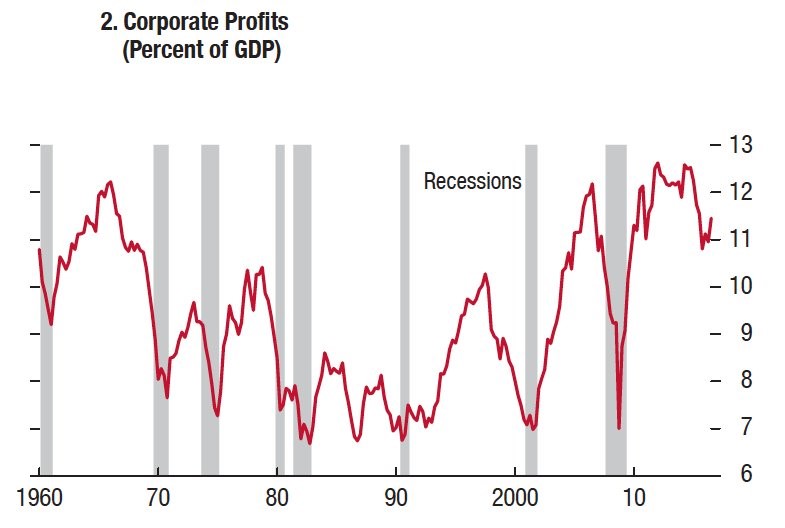 The bottom of the earnings recession was Q1 2016. The chart shows how corporate profits declining in relation to GDP are highly correlated with recessions. When firms see declining revenues, they start to fire workers. After the labor market weakens, revenues fall further. You may ask why firms fire workers if it ends up hurting the economy and sales. The reason is each firm must work in its own best interest. If sales are down, costs need to be cut. The management has a fiduciary responsibility to shareholders to maximize profits. They can’t be worrying about what their layoffs will do to the economy. This is the harsh reality of the business cycle. It’s this harshness that makes the Federal Reserve want to avoid recessions. The problem with that mindset is that debt needs to be unwound in a natural deleveraging cycle every few years or else firms will turn into zombies which can’t take risk because they have too much debt.

The central bankers met in the late winter of 2016 and decided on coordinated balance sheet expansion. If you don’t understand ‘Fed speak’, that means they bought assets such as stocks, corporate bonds, and government bonds. The Federal Reserve has been limited to mortgage bonds and treasuries, but the ECB buys corporate debt. It doesn’t matter what central bankers buy for the most part because the increased liquidity affects all assets. Quantitative easing has pushed stocks into bubble level as interest rates have been pushed down, making stocks the only option for investors to make a decent return.

As you can see, the S&P 500 started to show signs of weakness in late 2015 and early 2016. This made sense because the earnings recession was in full swing. The central banks then swooped in and bought assets, saving the economy for the time being. The grey lines show a clearly defined boost in purchases during QE1, QE2, and QE3. Technically there was no QE4, because the Fed wasn’t involved in the purchases in 2016. However, the asset purchases in 2016 were about the same size as during QE2. We can coin this round QEG because it was global.

The Fed isn’t allowed to buy individual stocks because that would distort the market further. The Fed would be picking winners and losers. Since central banks may never sell their assets because of the economic consequences, getting an investment from the Fed would be a major advantage for a corporation. Even though the Fed isn’t buying stocks, the US stock market is distorted because the Swiss National Bank (SNB) is buying US stocks.

As we have detailed previously:

The SNB is a big fan of Apple stock as it is its largest holding. In fact 24.65% of the SNB’s total holdings are in the tech sector. As you can tell, the first quarter has been when the value of the SNB’s holdings have increased. The $13.2 billion increase in Q1 2016 was pivotal because the stock market was crashing in early 2016.

The public pension fund deficits are being caused by low interest rates as they can no longer buy bonds to meet their goals. Inequality is occurring because only those who own stocks are experiencing the wealth gains from rising stock prices. The banks aren’t as profitable because their net interest margins are being crimped by a low Fed funds rate. Asset allocation is distorted because low interest rates mean investors must buy stocks. Finally, incentives are distorted because firms who have their stock purchased by central banks don’t have to worry as much about their operating performance because central banks rarely sell. If they do sell, it will be part of a broader policy objective, not because the firm had a bad quarter.