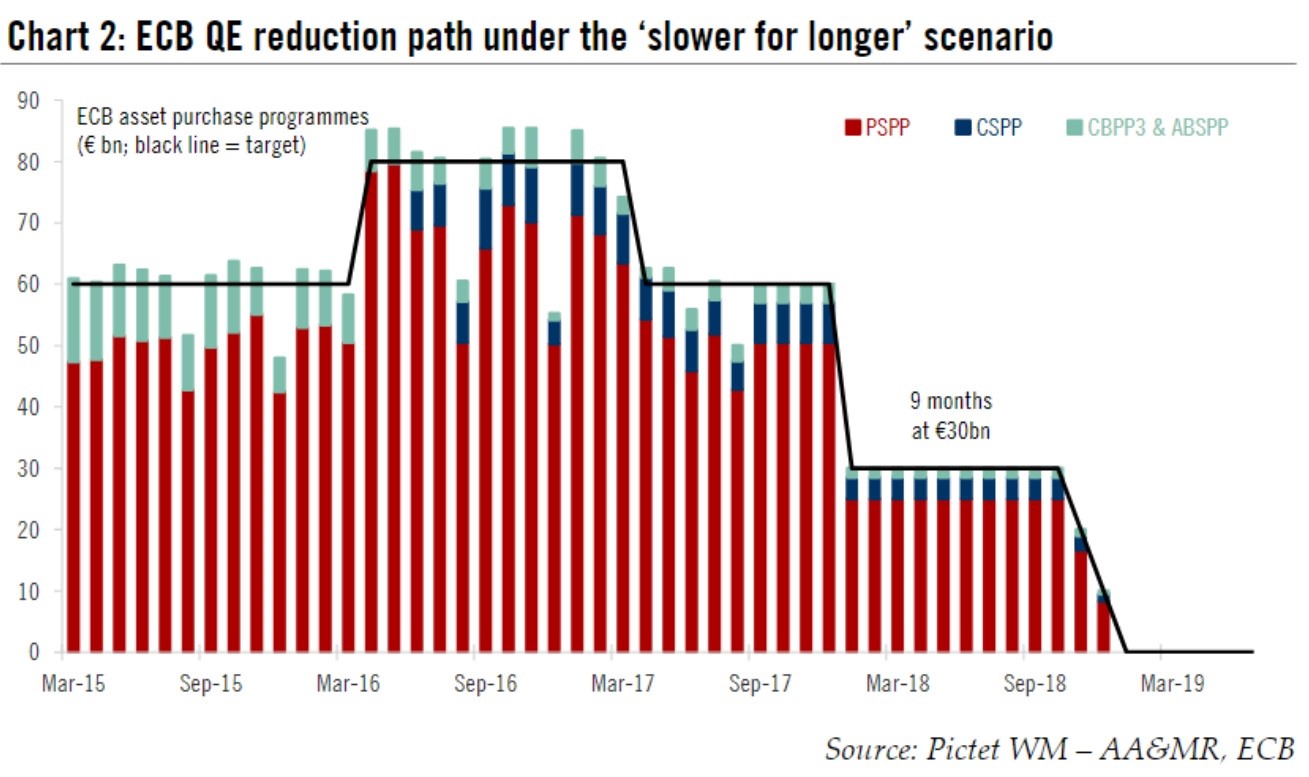 In this article we’ll look at the ECB’s monetary policy and the macroeconomic metrics in Europe. The biggest decision in the queue is what the ECB does with its bond buying program. The decision on the size and duration of Quantitative Easing in 2018 will be announced on October 26th.

The chart below shows one possible policy path that Bloomberg reported is being debated.

One Of The Possible QE Paths

The plan entails cutting bond buying from 60 billion euros per month to 30 billion euros per month for 9 months and then ending QE by late 2018 or early 2019. Considering how close the decision is to being announced, the ECB probably has agreed on an amount. Sometimes policies are leaked to the press to see what the market thinks and to ease the market into the change.

The goal for the ECB is to continue with the winding down of the QE program without causing volatility in the market. To be clear, the red bars in the chart above represent the public sector public program (think government bonds) and the blue bars represent the corporate sector purchase program. Some options for the ECB include keeping the corporate sector bond buying the same size while shrinking the sovereign bond purchases. The CBPP3 is the third iteration of the covered bond purchase program which aims to achieve broad macro goals unlike the first 2 iterations. The asset backed securities purchase program has similar goals.

The two main metrics the ECB looks at are GDP growth and inflation. GDP growth has improved this year, but inflation hasn’t met the 2% goal. The chart below reviews the inflation as measured three different ways. The way the ECB measures inflation it makes it looks like their bond buying barely did anything. Neither the core inflation nor the super core inflation have moved much since the recent purchases started in late 2014. This like if a baseball team pushed the walls back on its stadium and its own team couldn’t hit home runs. With the lack of improvement in these inflation metrics, it doesn’t look like any amount of bond buying will change the results. 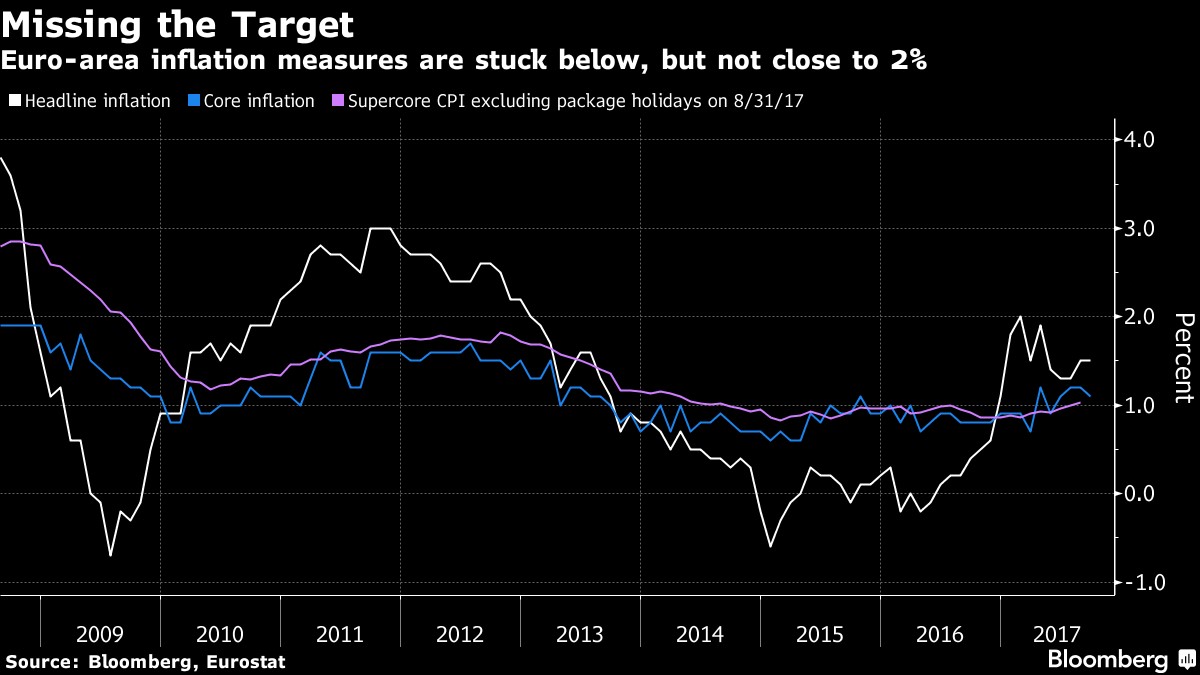 The ECB has had disastrous results when predicting wage growth. The staff forecasts haven’t come close to the actual results. 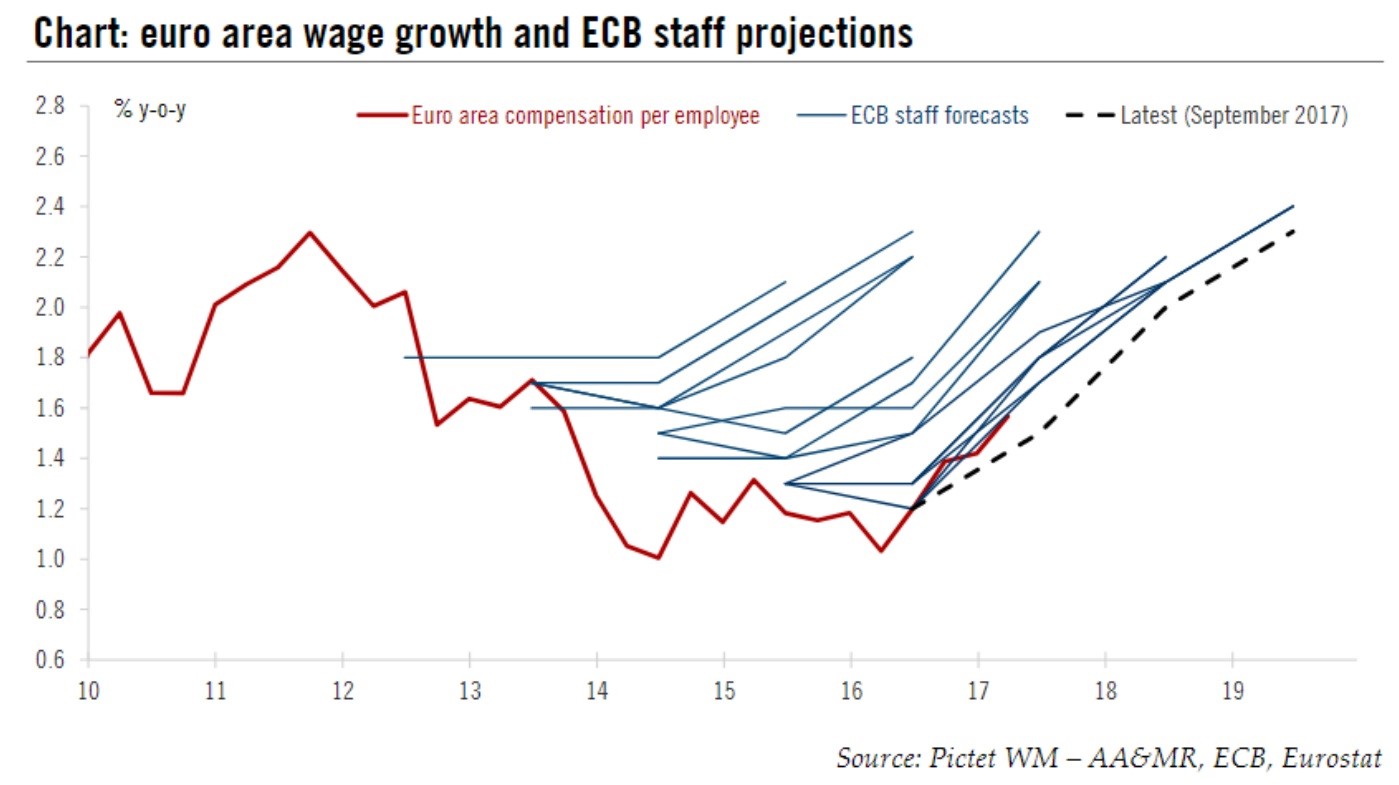 Many onlookers question the entire field of economics because these types of bad predictions made by policy makers. However, this is the case of predictions being manipulated by what the central bank wants. The ECB hopes its forecasts can help create a positive feedback loop. This doesn’t mean economics isn’t capable of projecting business cycles and guiding public policy. Studying trends can help businesses succeed in meeting customers’ needs. For example, if wage growth is subpar, a company can focus on expanding its low priced goods and services.

Unfortunately for the ECB, it can’t fight demographics with monetary policy. As we’ve discussed previously, one of the reasons interest rates are so low is because of the aging population, but that’s going to change. The chart below depicts this trend as India has the highest 30 year yield and the lowest median age while Japan and Germany have higher median ages with lower interest rates.

The biggest question about the ECB bond buying program is how much it has caused corporate interest rates to shrink. The Bank of America European options adjusted high yield spread is 2.49%. That’s the lowest spread since 2007 which is right before the financial crisis. The spread being this low doesn’t necessarily mean another crisis is coming next year. This is just context to show how low it is now.

Just like the Fed, the ECB is in charge of banking regulations. The latest controversy is about the new banking regulations which are having an outsized effect on Italian banks because they are heavily indebted. The new rule requires lenders to post collateral against the whole part of unsecured loans within 2 years. The Italian banking system is a mess so many cases take longer than 2 years to fix. Secondly, the new rule makes it so that the secured part of bad loans must be collateralized within 7 years. As you can see from the chart, these new rules have caused Italian bank stocks to underperform. 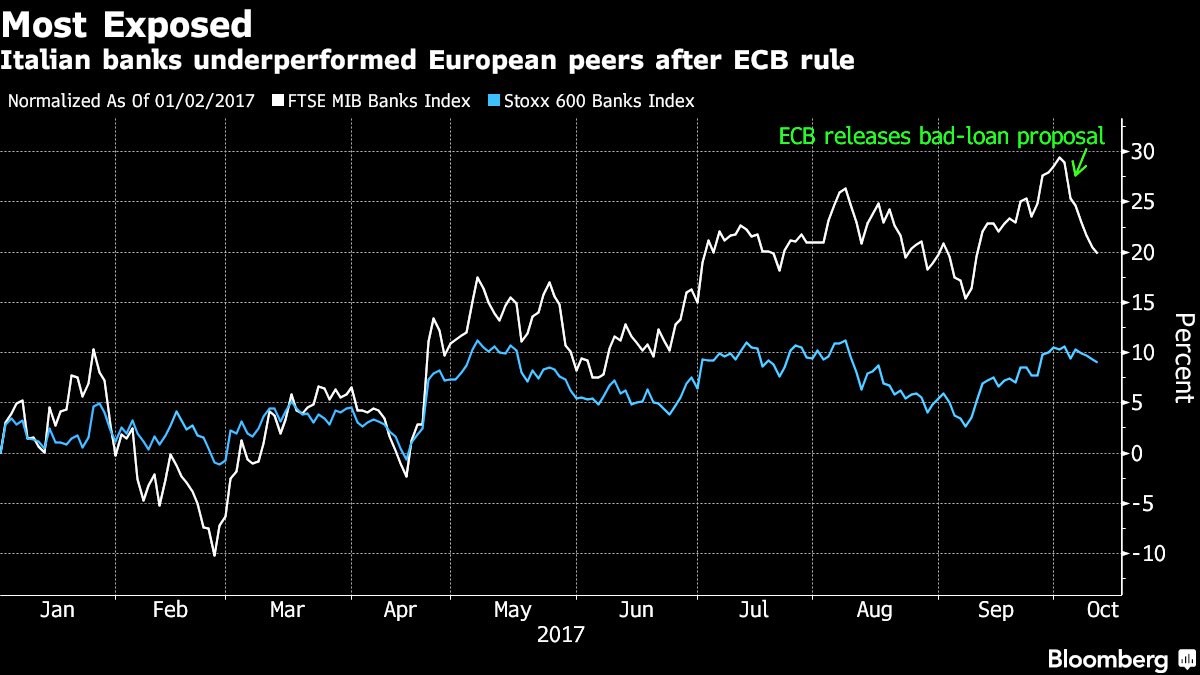 This situation is analogous to the Greek debt crisis. The E.U. has demanded Greece go through with austerity to solve its debt problem, but Greece instead has ‘kicked the can down the road.’ It’s tough to run a balanced budget when many Greeks don’t pay taxes, but want government transfer payments. In a similar situation, Italy is being asked by the ECB to make changes to shore up its banking system, but Italian leaders are reacting like stubborn children saying these rules will hurt credit conditions just as its economy starts to gain strength. Italian banks have exposure to 326 billion euros in bad loans. Since the ECB’s buying of Italian government debt is a proxy bailout of the country, you would think it would have negotiating power. The problem is the solutions are tough. Expecting the government that allowed for such a problematic banking system to be created in the first place to suddenly fix the problem is quite a reach.

The banks aren’t going to want to write down the NPLs (non-performing loans) which means the ECB’s solution for the heavily indebted Italian banks will be a failure. In the next economic downturn, the Italian banking system will need large bailouts to keep the country going. Italian officials think the selling of these bad loans will only benefit private investors. They don’t want to ‘face the music’ on what these loans are worth. Instead, Italian officials try to distract from the issue saying the derivatives held by French and German banks are a problem. Whether they are or aren’t a problem is immaterial to the NPLs held by the Italian banks.

Hopefully, this article gave you an idea of where European monetary policy is headed. In the near term, the ECB will decide on QE for 2018. It will be interesting to see how cutting the bond buying in half will affect markets. The ECB says it will add liquidity if there is economic uncertainty. In the long term, the debt held by the Italian banks will need to warded off or else it will cause a crisis during the next recession.

Reminds me of this chart. Demographics have huge implication for capital, growth and dynamism pic.twitter.com/dauPF5cSiv