The Next Fed Chair: A $7.4 Trillion Decision 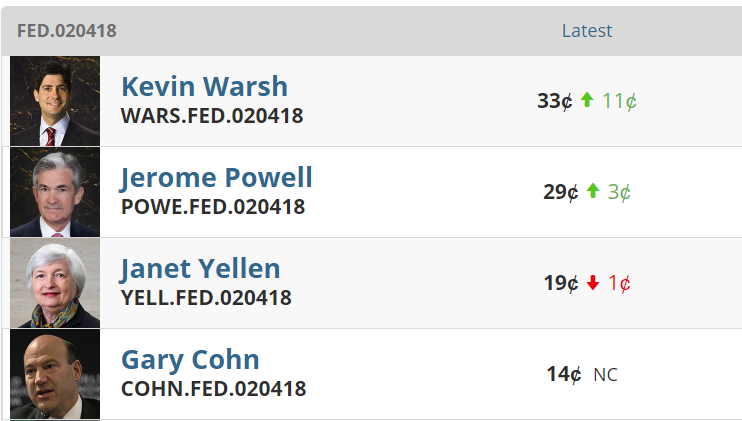 President Trump’s pick for the next Federal Reserve chair person is like a real-life offshoot of the Apprentice except the stakes are the fate of the global economy, meaning they are slightly higher. The three top contenders are Kevin Warsh, Jerome Powell, and Janet Yellen. Gary Cohn’s stock dropped in late August because he criticized Trump’s handling of the riots in Charlottesville. President Trump hates when his surrogates and cabinet members aren’t loyal. He was very mad at Anthony Scaramucci when he called him a hack. Scaramucci had to apologize for this to get a job as communications director which he quickly lost. The Washington Post reported Trump was simmering with displeasure over Cohn’s criticism of his handling of the Charlottesville events. This hasn’t knocked Cohn out of the running because there hasn’t been clear guidance out of the White House who the choice will be. There’s no specific deadline for when the choice needs to be made, but the Senate must confirm the next Fed chair by February 4th 2018.

This decision is a big deal as we highlighted in a previous article because Kevin Warsh opposes the policies Yellen and Bernanke have enacted. Kevin Warsh opposes quantitative easing which has led to the situation seen in the chart below. There is $7.4 trillion in global government bonds which have negative yields. The idea of negative yielding bonds was unheard of before a few years ago. If Kevin Warsh gets the gig, it could be unheard of again. He can’t control what the other central bankers do, but he can act as a leader to end this madness. The Fed is partially to blame for this scenario, so it can play a pivotal role in reversing it. This pick by Trump can be a $7.4 trillion decision. That might be a low-ball estimate because under Yellen, this trend might expand further as inflation has been declining lately. 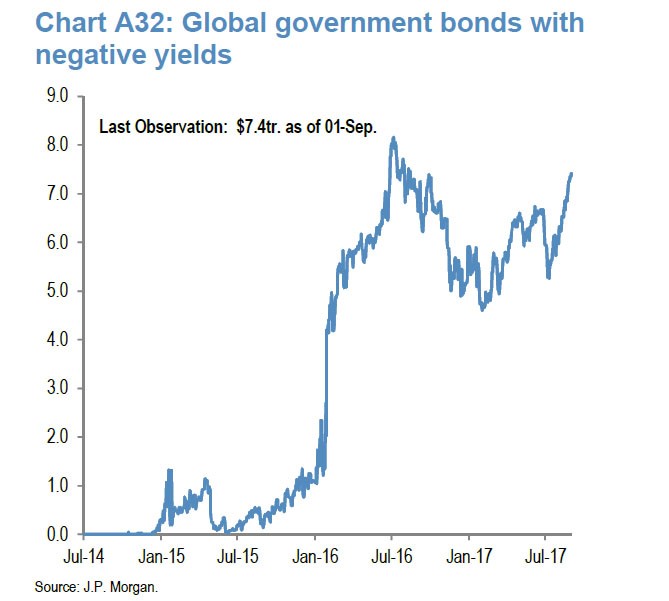 Kevin Warsh Is Critical Of QE

In a Wall Street Journal article written with Michael Spence in 2015, Kevin Warsh ripped into QE which is one of Bernanke and Yellen’s favorite monetary policies. He wrote “QE’s efficacy in bolstering asset prices may arise less from the policy’s actual operations than its signaling effect. Mr. Bernanke himself has said that QE “works in practice, just not in theory.” Multiple event studies in the U.S., Europe and Japan show that financial-asset prices move higher when QE programs are announced and implemented, and suffer when QE is thought to be ending. Clearly, market participants believe central bankers use QE, among other reasons, to put a floor under financial asset prices.” Kevin Warsh is explaining the notion that traders feel the Fed and other central banks have the market’s back.

This gives the term ‘don’t fight the Fed’ a new meaning because, not only should you avoid shorting (selling stocks) when the Fed is positioned dovish, but also you should never position yourself negatively because the Fed will always catch the market if it falls. It’s arguable that the 2016 global central bank meeting where they decided to increase monetary stimulus to save the global economy from a recession was the straw that broke the camel’s back in terms of the market’s ability to fall. If many of the factors for a recession were in place and there still wasn’t a recession, it makes traders think the central banks will never let the system fall.

Everyone & Their Mother Is Short The VIX

Kevin Warsh is of the logical mindset that eliminating all risk isn’t a great idea as there’s unintended consequences. The Fed acting in a rogue manner is the culmination of years of policy interventionism into the free market. The logical extension to the Federal Reserve getting involved in times of crisis, is ‘why doesn’t the Fed try to prevent anything bad from happening in the financial markets?’ The theory on why this experiment isn’t a great idea can be analogized as a parent who puts a kid in a bubble preventing him from feeling any pain, preventing him from solving their own basic problems. When the child grew up, he would be in for a rude awakening, unable to function in the real world. It would be the same thing for the market as traders have gotten extremely complacent. One of the biggest worries the bears have is the extremely large amount of money which is short volatility. This means they are betting against the market falling. It’s been a great trade as 2017 has been one of the least volatile years ever. The question is what will happen when the trades in the Financial Times chart, which shows this short volatility trade gaining popularity, reverse themselves in a selloff. Everyone thinks the Fed has the market’s back. What if it doesn’t? What if the Fed can’t prevent a crisis? 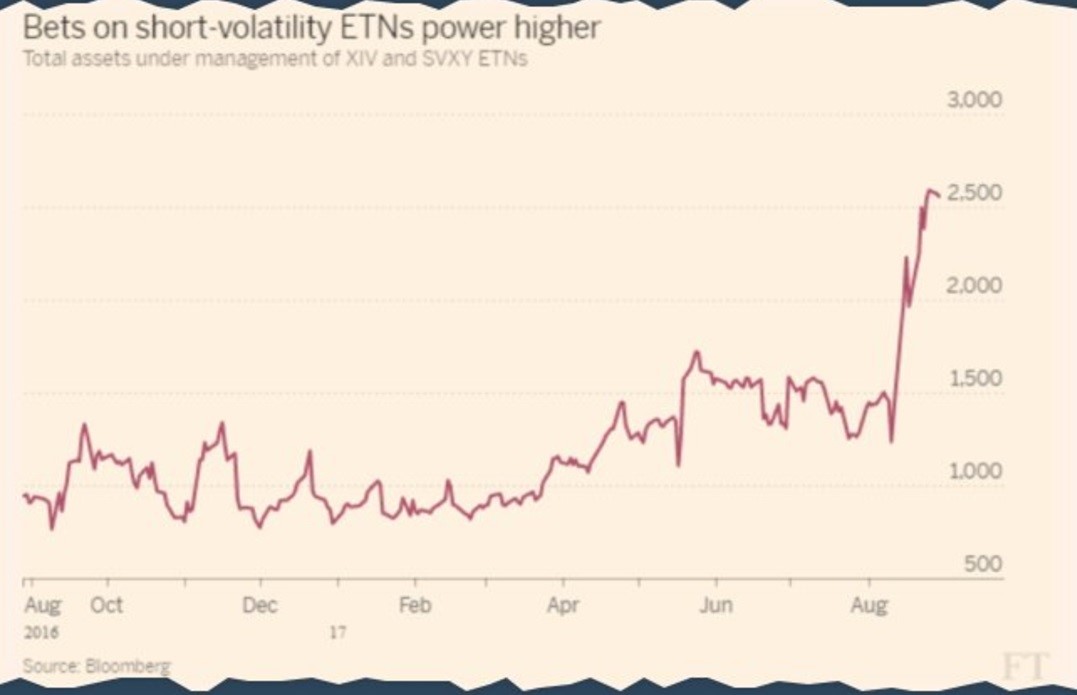 Short Volatillity Has Been A Winning Trade

In the same article quoted before, Kevin Warsh said, “We believe that QE has redirected capital from the real domestic economy to financial assets at home and abroad. In this environment, it is hard to criticize companies that choose “shareholder friendly” share buybacks over investment in a new factory. But public policy shouldn’t bias investments to paper assets over investments in the real economy.” Public companies have been buying back stocks with capital which could be invested in their business. The financialization of the economy is a relatively new phenomenon as firms only have become infatuated with buybacks in the last two cycles. If the financial markets are going to reward stocks with above average long-term multiples, companies are going to buy back stock. Warsh thinks without QE the real economy would be prioritized causing companies to reinvest into their businesses which would boost productivity and help Main Street instead of Wall Street.

There’s no way to tell who Trump will pick as the next chair. He may pick someone we’ve never heard of. However, Warsh makes sense as a good fit. If he’s picked, we’ll see a new situation where QE isn’t one of the tools in the monetary policy tool box. This could reverse the trend of more and more government bonds having negative yields. Therefore, this pick can be a $7.4 trillion decision. This decision has such large implications because Trump is potentially deciding between polar opposites. Technically, we don’t know if he’s considering Yellen, but she still gets decent odds in the betting market.