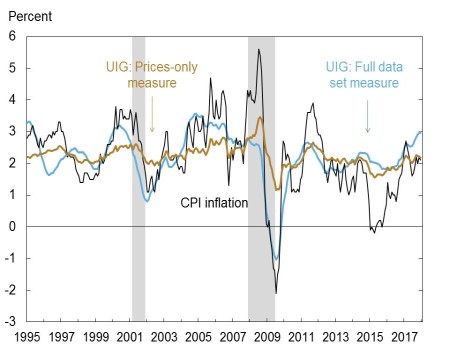 From the research we’ve done in previous articles, it looks like the Fed might let inflation run hot, meaning it will be fine with core inflation above the 2% mandate. Keep in mind, the unwind of the balance sheet, which is pushing the shadow Fed funds rate higher, might restrict financial conditions in 2020 and later. The Fed had its discussions about allowing inflation to heat up in late 2017 and early 2018 because inflation will probably hit and pass its target in 2018. The Fed is getting ahead of the market by making the decision before it occurs. This potential is already starting to be realized. As you can see from the chart below, the seasonally adjusted annual run rate in core inflation is increasing over the past 3 and 6 months. 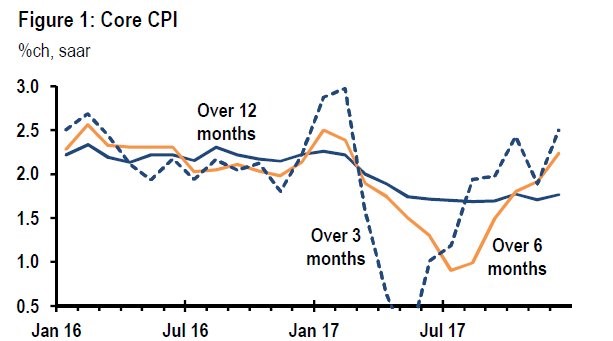 Core CPI Has Been Increasing

The breakeven inflation rate has increased to 2.03% which is the highest since March 2017. That doesn’t sound like much, but it’s a 37 basis point increase from June 20th, 2017. Furthermore, as you can see in the chart below, the NY Fed’s Underlying Inflation Gauge has increased to the highest rate in this business cycle.

UIG Is Signaling Inflation Has Momentum

The UIG “full set” hit 2.98% in December. It’s often considered a leading indicator for inflation, so this is important for 2018 inflation forecasts. The UIG “full set” models 346 macroeconomic and financial variables. The “price only” metric only looks at the sub-components in the CPI report. Based on these metrics, the NY Fed’s estimate for trend inflation is somewhere between 2.2% and 3.0%. These are all signals inflation has momentum in 2018. This momentum existed in the beginning of 2017, but it fell flat. This time the global economic growth is stronger, and the tax cuts will help US GDP. The unemployment rate is also lower which means there could be wage inflation.

Wage Growth Picking Up For The Lower Class

Like most decisions in life, the decision the Fed is potentially making to allow inflation to run hot has costs and benefits. The cost is a potential out of control increase in commodity inflation. The benefit is allowing middle and lower class wage growth to gain momentum. The U6 unemployment rate, which includes discouraged workers and those working part-time for economic reasons, reached 8.1% in December 2017. Its low in the previous cycle was 7.9%, and the low in the cycle before that was 6.8%. As you can see, the slack in the labor market is starting to become tight. It was a long road from the 17.1% peak, but now wage growth should be here.

There are many wage growth measurements which show different information. The latest December reading from the Atlanta Fed wage tracker shows wages were only up 2.9%. That’s a big dip from the peak in November 2016 which was 3.9%. Growth never reached the 4.4% peak seen in the previous cycle. On the other hand, the BLS report is indicating more positivity. As you can see from the chart below, the year over year wage growth in the lowest income percentiles saw the best results. 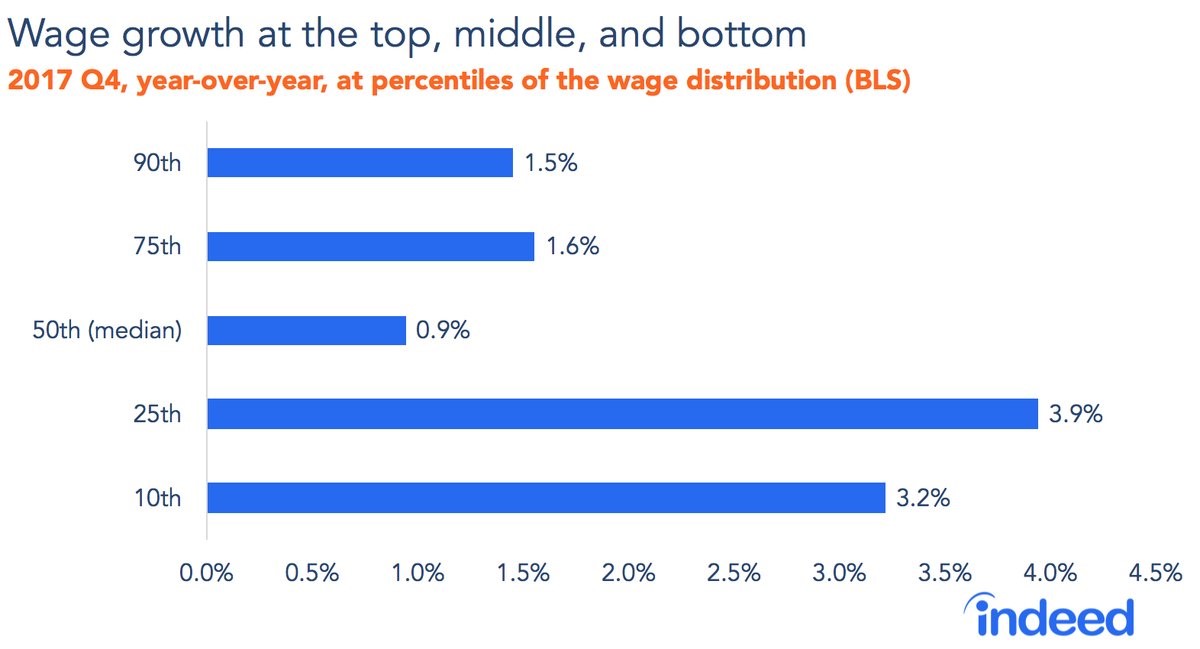 The Fed’s decision on whether to have contractionary or expansionary policy is important because the low income class typically sees the most wage growth at the end of the cycle. Extra wage growth allows those living paycheck to paycheck to save money which can help them handle the next recession which could be coming in 2-3 years, as we previously reviewed in multiple articles such as the output gap. The high wage growth in the 10th and 25th percentiles is also being catalyzed by the improvement in the manufacturing industry. The manufacturing recession in 2015-2016 followed the decline in energy prices, the weakness in global trade growth, and the weakness in emerging markets. 2017 saw a rebound in all those categories. 2018 looks like it will see a continuation of this trend as emerging markets are just getting going and energy prices have been increasing. The tax cut will also help these workers because of the economic growth it will create and the increases to their paychecks it will bring.

The wage growth among education levels is consistent with the breakdown by income level. As you can see from the chart below, those with no high school degree and only a high school degree saw their wages increase by 2.3% in Q4 2017. The reason why these workers do well during the end of expansions and do the worst during recessions is because their work is the most disposable. Businesses don’t layoff top level management when there’s a recession; they layoff the bottom level employee which were added when business was booming. 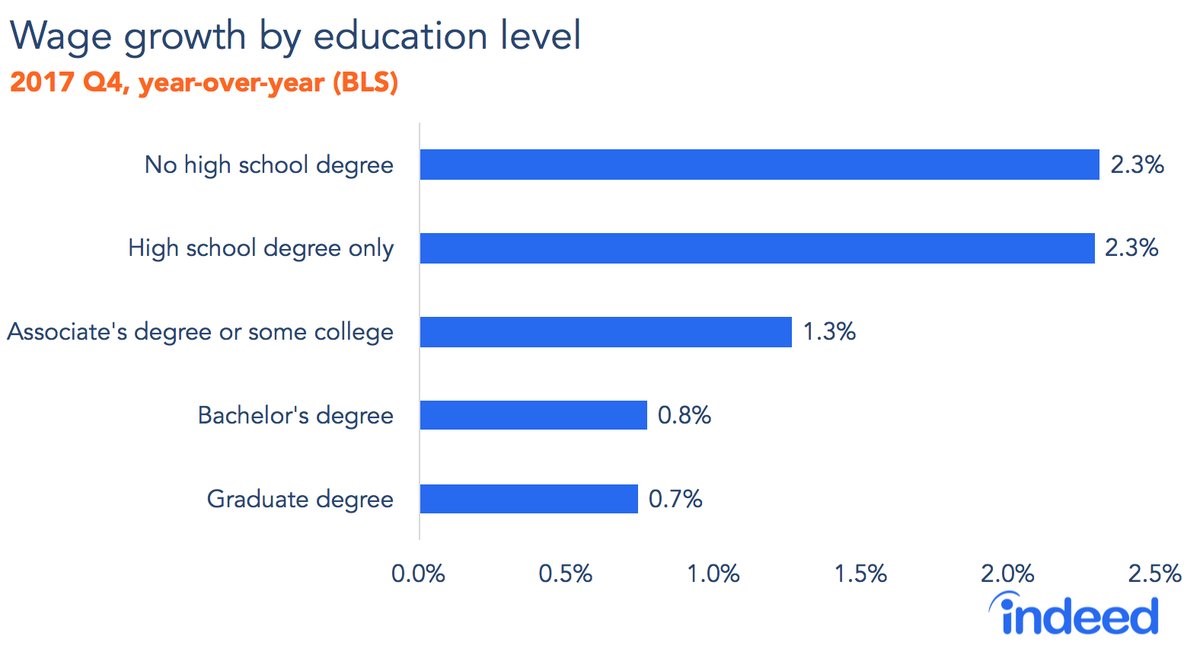 There are a few changes to the workforce that occur at the end of the business cycle. As we mentioned, low wage workers get a raise and the percentage of discouraged workers and part time workers who want to work full time declines. Temporary workers also become full time workers because it’s tough to find workers. One of the stats which gets less coverage is that the rate at which people leave disabled status increases at the end of the cycle. 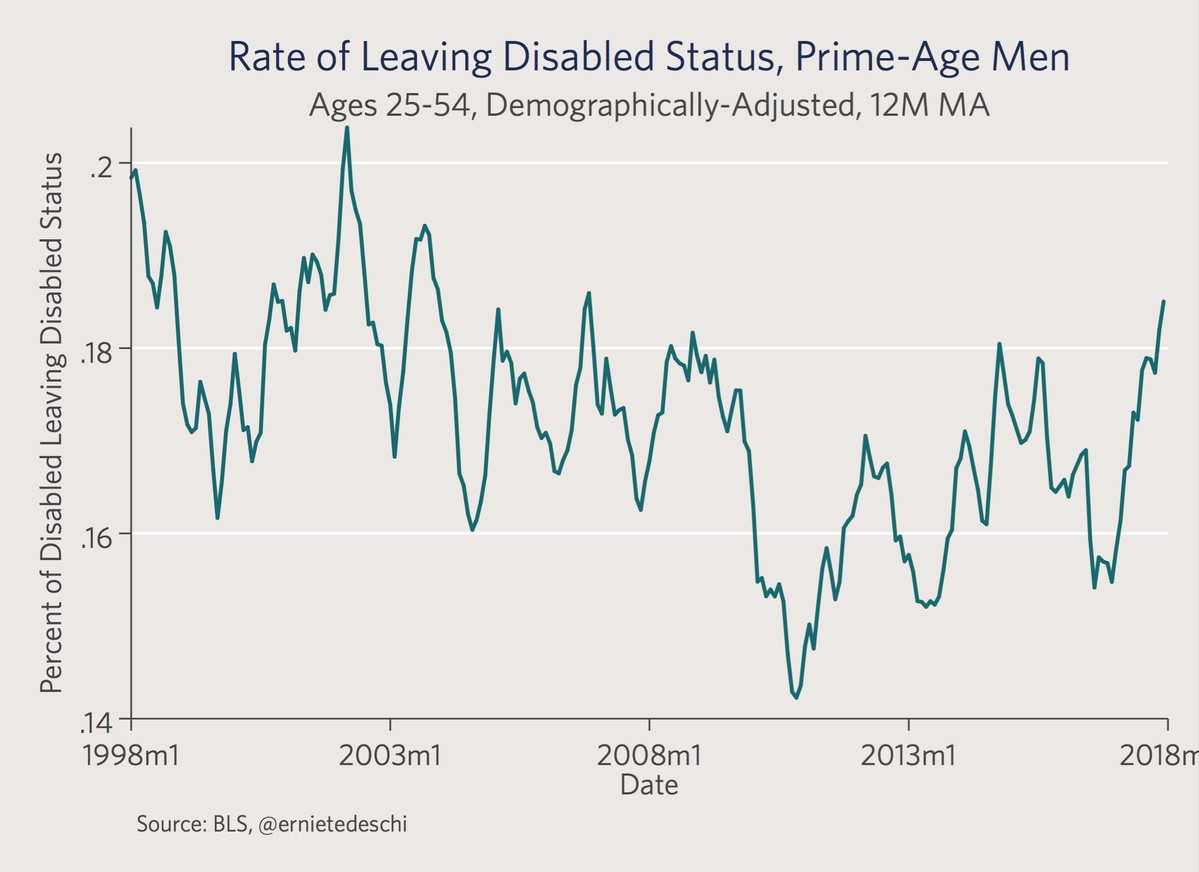 The purpose of this article was to show the potential positive side of the Fed leaving rates lower than they would normally have them. Remember, the catalyst for the Fed wanting to eventually raise rates higher is for there to be room for them to cut rates in the next recession. Obviously, risk assets will love the expansionary policy in 2018 because financial conditions will remain loose. However, the less followed stat is that low wage workers are getting raises now, which is much needed financial relief following how devastated this segment of the population was following the previous recession. The problem however is that the wage growth for lower income labor will only last as long as their is economic growth. Most indicators suggest that we could be witnessing a recession on average within 3 years.