China’s Economic Growth Could Decline In 2018 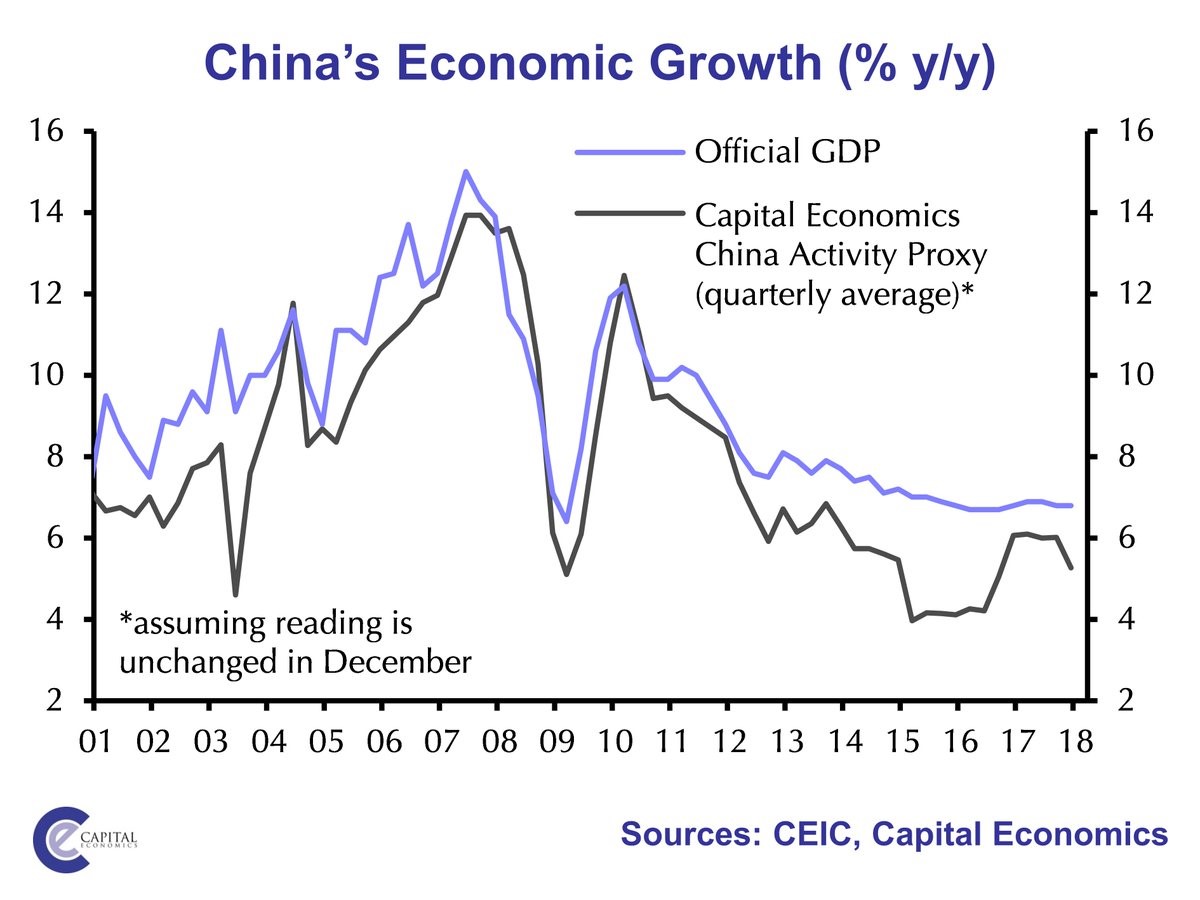 The Chinese economy had been seeing declining growth for the past 7 years up until 2017 as it transitions away from being based on manufacturing and toward services and consumption like the United States. Because the Chinese policy makers are more concerned with preventing financial bubbles, diversifying the economy, and preventing pollution, most economists think there will be a deceleration in 2018. We’ll discuss the future trajectory of the economy later in this post, but let’s first review 2017.

As we mentioned, Chinese GDP growth in 2017 accelerated for the first time in 7 years. GDP growth exceeded the government’s goal of 6.5% and beat 2016’s growth which was 6.7% as it came in at 6.9%. It was 6.8% in Q4. Growth has been coming from exports. The “global synchronized growth” term which has become popularized in the past year, is driving this improvement as exports increased the most in 4 years. Keep in mind, these buzzwords are usually backward looking. After a weak 2016, economists were all talking about tariffs and populism causing a decline in trade. Sometimes these buzzwords make short term trends seem like more than they are. There’s always a reason for changes in growth, but the changes aren’t always sustainable.

The increase in demand for semiconductors and other tech products has boosted growth. That could change, but 2017 didn’t see any restriction as there was an increase in America’s trade deficit with China. It’s wrong for policy makers to only think about the negative effects cheap Chinese goods have on U.S. firms who can’t compete. Instead pundits should think of the capital freed up to invest in firms which are globally competitive or the extra money consumers have because they bought cheaper products. One factor to keep in mind for the U.S. is that this bilateral trade deficit has a net negative effect on GDP. Exports help GDP growth and imports hurt it. U.S. GDP is driven primarily by consumer spending, but trade is also important.

The Official Stats Can Be Misleading

China is trying to transform its economy to be more reliant on consumer spending, so stats measuring the strength of the consumer are becoming more important to review. December retail sales growth was 9.4% which was the slowest growth since February 2006. On the bright side, November, which includes Singles Day, which is a massive shopping holiday in China, saw 10.2% growth. Disposable income growth was 7.3% in 2017 which was up from 6.3% growth in 2016.

The main problem with any data from the Chinese government is its reliability. The Chinese government is widely considered to falsify data. However, you can’t just say everything is a lie and throw your hands up in dismay. The chart below helps us figure out where growth is compared to the official number. The Capital Economics China activity proxy shows growth had improved in 2016, but recently started to decelerate again. The firm expects 4.5% growth in 2018, ignoring the official report.

The estimates for 2018 economic growth are conservative partially because of tight monetary policy. The official government projection is for 6.5% growth again. The chart below shows the People’s Bank of China has been increasing the 7 day reverse repo rate. 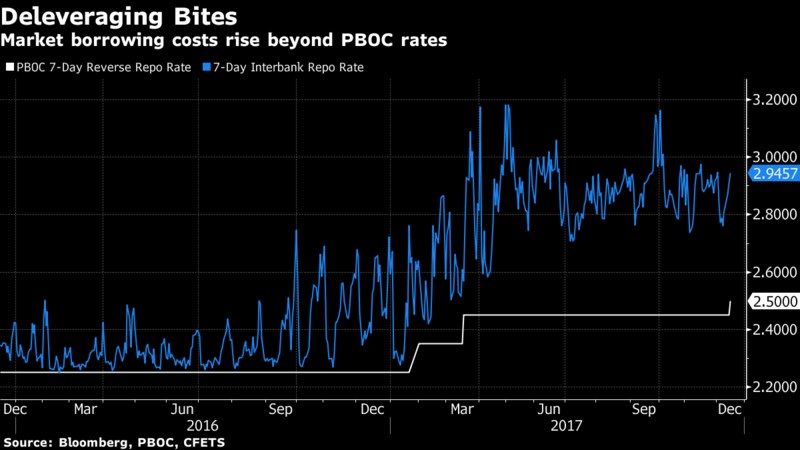 Furthermore, the market is pushing for more tightening as the 7 day interbank repo rate is higher than what the PBOC has it set at. Money supply growth is also set to slow after it grew 9% in November 2017 which was a record low; it is heading towards 7-8% growth in the next few years.

The Details Of The Fixed Investment Growth Deceleration

Chinese fixed asset investment in 2017 was up 7.2% which was the slowest growth rate since 1999 which had 6.3% growth as you can see in the chart below.

Obviously, China has a pollution problem. You can tell that by visiting the country. If you’re wondering why China is so worried about financial bubbles, look at the chart below which shows the Chinese property market has created a massive wealth effect. 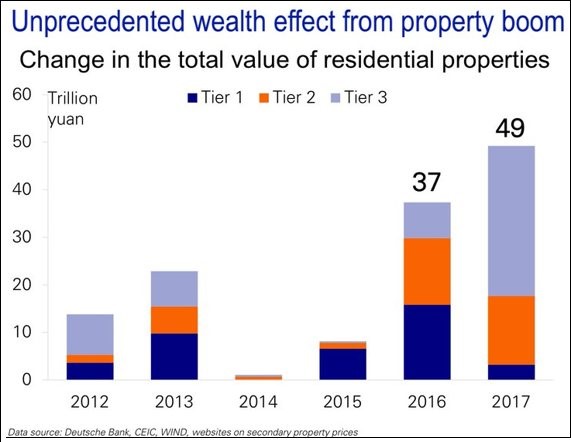 The tier ranking system is based on the size of cities. Tier 3 had the biggest increase because the Chinese government is trying to help solve the problem of urban density by having people move to the less populated cities. The tier 3 cities have more affordable housing, although, that’s clearly changing, evidenced by the huge increase in value in 2017. 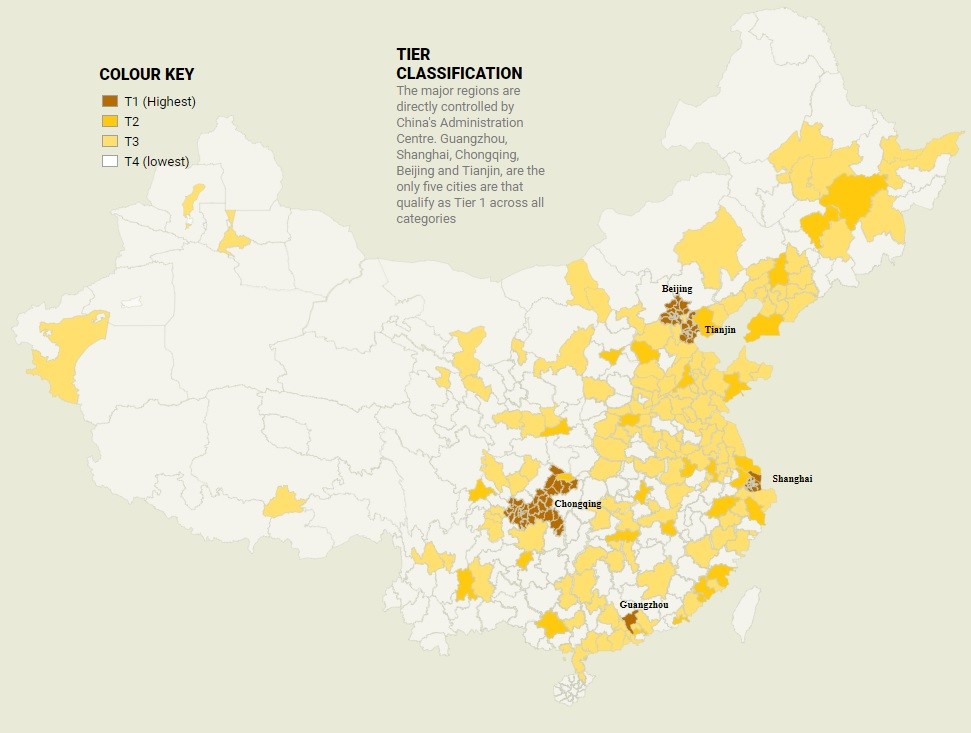 There is growing evidence to suggest that China could face further declines in economic growth with monetary policy tightening, fiscal spending on fixed investments and retail sales decelerating. The Chinese government is trying to avoid problems which have already been created, namely the property bubble which has shown explosive valuation increases in tier 3 cities. A further weakening USD could also be a negative catalyst for the Chinese economy.