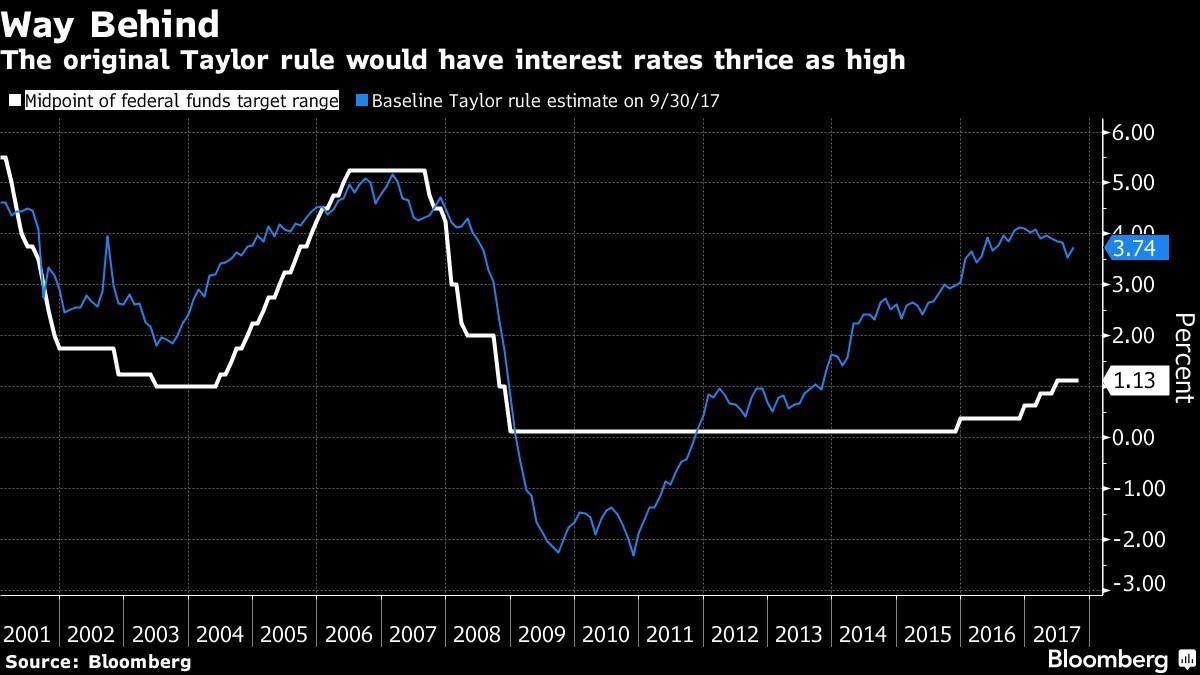 Trump’s decision for Fed chair will be made sometime this fall. We’ve already discussed Powell and Warsh who are the front runners. In this article, we will take a look at John Taylor because he was interviewed by the President. John Taylor is a reformer much like Kevin Warsh. Powell is the odd man out because he’s more of a safe pick who would keep the status quo. It’s tough to say if Powell being the odd man out helps or hurts his chance of being picked. The betting market has Powell in first, Warsh in second, and Taylor in third. However, anyone Trump interviews is worth reviewing. Since Taylor has opinions that are antithetical to the current establishment thinking (Yellen & Bernanke), it’s worth reviewing them to learn about what an influential monetary theorist thinks about policy even if he doesn’t end up getting picked.

John Taylor is a Stanford economist who is known for his creation of the Taylor Rule, which we’ve discussed in previous articles. The Taylor Rule is a formulaic calculation of what the Fed funds rate should be based on economic metrics. The Fed looks at this policy prescription when setting rates, but doesn’t always follow its recommendation.

The Taylor Rule Says Rates Should Be Tripled

As you might be able to tell by the fact that John Taylor created this rule, he is in favor of a rules based approach to monetary policy. This means the economic data controls where the Fed funds rate goes. The Fed only impacts policy by tweaking the formula. Essentially, this rules based approach is the middle ground between what we have now and ending the Federal Reserve. Yellen and other members of the Federal Open Market Committee are against this approach because they want the Fed to have flexibility to combat recessions. Cutting rates and quantitative easing are tools in the Fed’s toolbox to deal with economic strife. However, Taylor is in favor of increasing Fed flexibility in times of crisis, so their criticism doesn’t have merit.

You can argue Taylor wants to have it both ways. He wants rules, but also wants the Fed to help the economy when it’s falling. That’s a hypocritical philosophy. He was against QE2 and QE3, but is less critical of QE1 saying QE1 “help[ed] to arrest the ensuing panic in the fall of 2008”, but “QE1 failed to strengthen the economy.” His goal is to use the rules based approach to prevent the Fed from being too easy which leads to the creation of financial bubbles. As you can see from the chart above, the Fed kept rates below the Taylor Rule from 2002 to 2004 which helped create the housing bubble. People who took out adjustable rate mortgages were then forced to default on their loans when the Fed raised rates from 2005 to 2006, back to what the Taylor Rule suggested.

It would be interesting to see what John Taylor would be able to get accomplished as Fed chair with few of the voting members on the Fed buying into his theories. It’s like how Trump had a tough time governing after he was elected because many people in Washington disagreed with is agenda.

Let’s look into some of the points Taylor has made to see which make sense and which don’t. First off, when testifying before the House Financial Services Committee he said the Fed “should be required to adopt and explain its monetary strategy, and then compare that strategy with monetary policy rules that are out there in a transparent way.” This isn’t a great criticism because the Fed already explains its policy in a transparent way. In its statements, the Fed doesn’t compare policy to a rules based system such as the Taylor Rule, but by explaining the puts and takes in its decision, it is indirectly comparing the decision to such rules. Taylor should have said directly that he wants a rules based system (like he does want) instead of beating around the bush.

Now let’s look at some points made in an opinion piece he jointly wrote with Paul Ryan (the current Speaker of the House) in November 2010 in response to QE2.  The piece states that there should be “reasonable and predictable regulations.” Given it was written with Paul Ryan, this means regulation cuts which is music to President Trump’s ears.

The piece criticized QE for being fiscal policy which makes the Fed political. This is a very fair criticism because Fed policy aimed to keep the economy steady in a period where the Congress couldn’t get any fiscal measures passed to help the economy. The biggest point in the piece which will likely ruffle feathers at the Fed is that Taylor and Ryan say they want to eliminate the second mandate of the Fed which is to have maximum employment, only keeping the stable prices mandate. This isn’t a consistent point because the Taylor Rule uses employment in its calculation. There will always be puts and takes on monetary policy. The Fed can never directly cause the unemployment rate to fall. The point of a dual mandate is to balance employment and inflation to have policy that doesn’t set rates too low or too high. A better criticism, if you’re arguing for rate hikes, would be to say the Fed currently has interest rates too low since the unemployment rate is 4.2% which is full employment.

The piece argues the Fed should have public hearings before Congress. That sounds great in theory, but most Congressional officials aren’t experts on monetary policy. The media already interviews Fed Governors constantly. They give speeches every week. There isn’t a case to be made that the Fed isn’t engaged enough. Finally, the piece says the Fed should care more about food and energy inflation instead of just emphasizing core inflation. This is inconsistent because Taylor wants a simple and clear Fed, but it wouldn’t be simple and clear to have a more volatile Fed funds rate which moves at the whim of oil prices.

In simple terms, if Taylor is picked and he gets his way because Trump appoints like minded FOMC members, the Fed’s balance sheet will be shrunk and the Fed funds rate will go up. The problem with many criticisms Taylor gives is they’re inconsistent. He likes some Fed intervention, but dislikes others. The two most consistent theories are what Yellen has and the alternative which is to end the Fed. Yellen likes most intervention while the end the Fed camp prefers almost no intervention.