Is Powell The Next Federal Reserve Chairman? 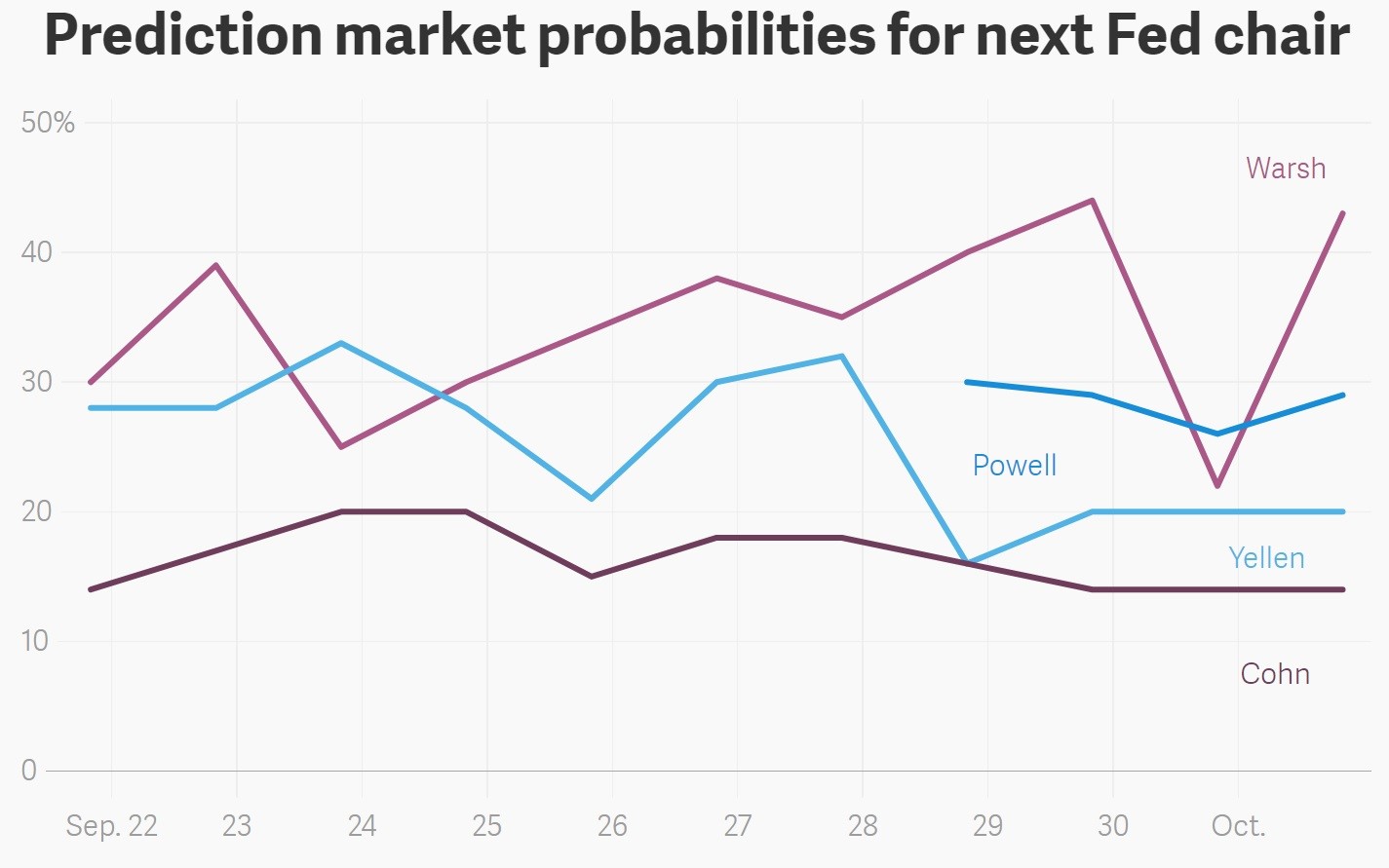 President Trump will decide on who the next Fed chairperson will be sometime in between late October and early November. The unusual aspect of this decision is the only person who knows who Trump will pick is himself. This aspect has shown up lately as Jerome Powell has become the second most likely pick after Trump interviewed him. Powell wasn’t even on the betting market website before Trump interviewed him. Thus far, Trump has interviewed Cohn, Yellen, Warsh, and Powell. You can see the chances of each below. It’s an odd lot of contenders because they vary widely on policy. It’s been reported that Trump asked John Allison to be a Fed Governor, but he didn’t accept. That furthers the diversity among contenders for Fed roles that are in Trump’s head.

Powell Comes Out Of Nowhere

An analogy for this decision would be if a person was deciding which vehicle to buy and they narrowed down the options to a Tesla Model 3, a Ford F-150, and a Toyota Prius. Those options aren’t similar other than they all have 4 wheels. With the names given we have a full swath of potential picks. The most hawkish would be Allison since he wants to end the Fed. The second most hawkish is Warsh who strongly opposes quantitative easing. The middle pick would be Cohn because we don’t know much about his monetary policy stances. Next you have Powell, who we will review in this article. Finally, you have Yellen who would be the most dovish in the group. You could argue there needs to be a more dovish member of this group to make it a full swath, but there aren’t many who would argue for maintaining the Fed’s balance sheet size and not raising rates at this late point in the cycle.

Even though we’ve already outlined the Fed contenders, we have never mentioned Powell because he wasn’t on anyone’s radar. It was always possible Trump could pick someone out of nowhere since we don’t know exactly what he’s looking for. The market is probably relieved this ‘off the wall’ pick has monetary policy experience. Powell is a lawyer and investment banker. He was partner at Carlyle Group which is a private equity firm. He was also the Assistant Secretary and Undersecretary of the Treasury under President Bush the elder. He was in charge of bank regulations in that position which is why he was picked in April to head the bank oversight committee. He was appointed by Obama to fill an unexpired term in 2012 and then received a full term appointment in 2014 which expires in 2028.

President Trump seems to want a Fed chair who is a dove, has business experience, and opposes strict regulations on the banks. Powell seems to mostly check these boxes. He seems to be against burdensome regulations, has experience in private equity, and is a supporter of Yellen’s fairly dovish stance where she’d only raise rates and shrink the balance sheet if the stock market didn’t selloff in response.

One clue we can look at to determine how much of a deregulator Powell is would be his statement on the too big to fail issue. If you aren’t familiar, bailing out the banks isn’t a viable long term solution to averting financial crises, so regulators are trying to figure how to avoid doing it again. In a 2013 speech, Powell said this solution will take years. He said regulators were ‘on the right track.’ It’s not a surprise someone involved in the process would support the progress being made. Furthermore, he said all options were possible such as returning to Glass-Steagall where commercial and investment banks were separated or limiting the size banks can grow to and breaking up the big banks.

“My own view is that the framework of current reforms is promising, and should be given time to work. In any case, too big to fail must end, even if more intrusive measures prove necessary in the end.”

That doesn’t sound like a free market capitalist to us. Breaking up the banks would be a massive regulatory intrusion into the market. To be fair, the Fed helped create this oligopoly, so it would be reversing the problem it created, not reversing what the market decided. Either way, Powell may not be the perfect fit in terms of financial regulation and that’s what he made his career out of. This is the argument against him being picked.

As we can see, even though Powell is a Republican, his stance on regulations isn’t as in line with Trump’s vision as Warsh is. Where Powell excels is he is more in line with Yellen’s approach to gradually raise rates and shrink the Fed’s balance sheet. His appointment wouldn’t cause a selloff in stocks and bonds like Warsh would. To get a sense of Powell’s overarching thoughts on monetary policy. You can read his June testimony. He expressed support for the current system where the Fed has high reserve balances. The slide below shows that simulated path implies the Fed having a $2.9 trillion balance sheet. This dovishness is a far cry from Warsh who would want to shrink it back down to $900 billion. To be clear, Powell wants this balance sheet size for operational reasons. However, the fact that he would want to maintain a higher balance sheet than before QE tells you his leanings. He supports the status quo which has been dovish ever since Bernanke was appointed. 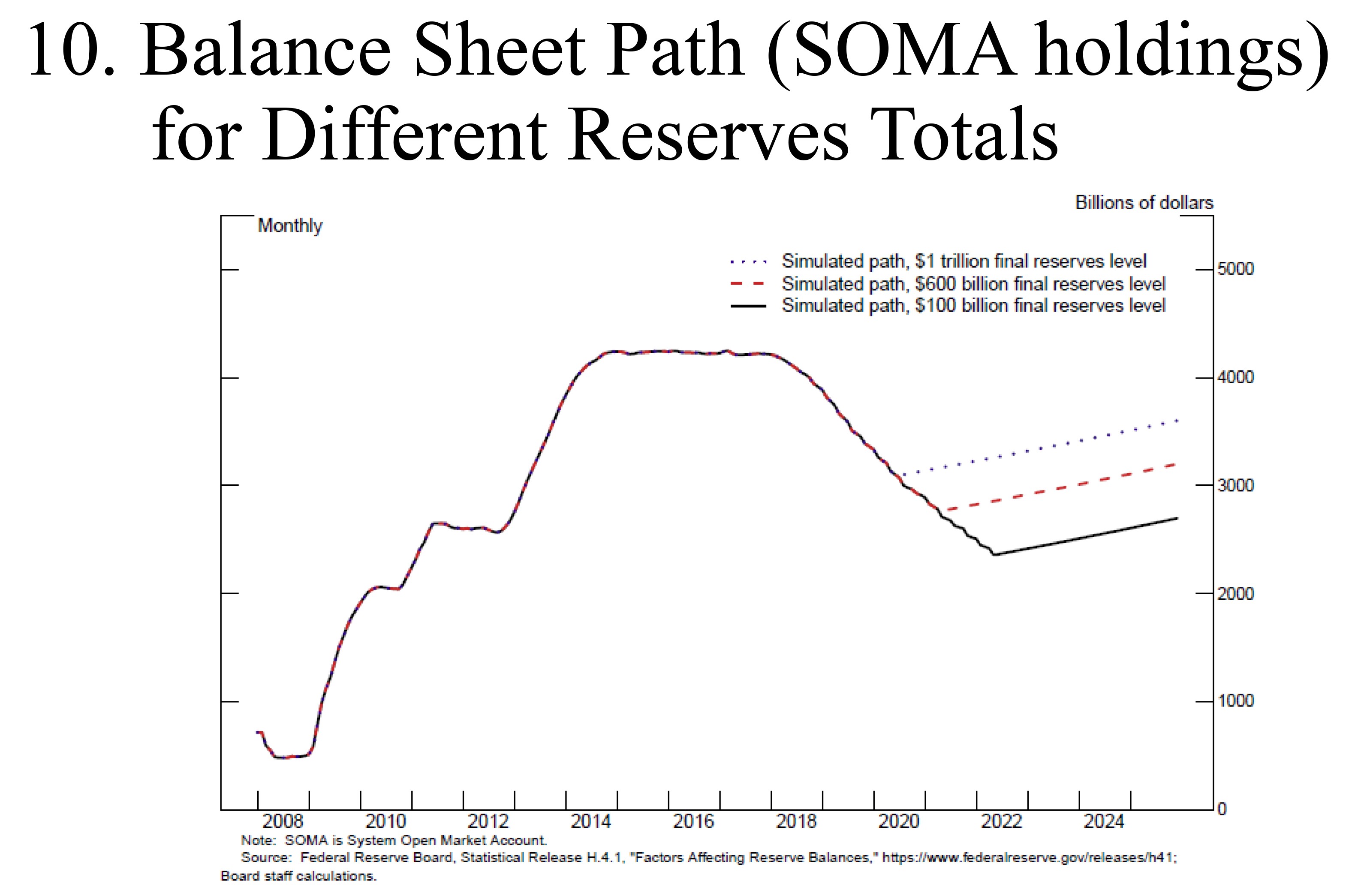 Powell is a contender because he was one of the 4 people interviewed by Trump. Unless there’s a new candidate that comes out of nowhere, the job will either be given to Warsh or Powell. Both have dramatic differences. Powell seems to be more in favor of regulations; Warsh more harshly opposes low interest rates and any form of QE. If there was a recession under Warsh’s watch, he might not implement QE 4. That could be bearish for equities.