The 2nd half of 2017 and 2018 will be pivotal moments for monetary policy. Global central banks have bought assets to the tune of trillions of dollars in the past few years, known as quantitative easing. Central bankers are providing guidance for future policy which entails shrinking their balance sheets (U.S. Federal Reserve) and tapering their expansionary policies (Bank of Japan & European Central Bank). The biggest question which remains is what that will do to financial asset prices which have increased remarkably. In fact, the ratio between financial assets and real assets is at a record high.

The chart below compares the MSCI World Index, which shows global stock prices, with the major global central banks’ balance sheets, which include the ECB, Fed, and JCB.

Using the data from 2007, the two metrics have a 79% correlation. Lowering interest rates encourages risk taking behavior as investors search for yield. This is the main thrust behind equities moving higher. Not only bonds are being bought. The JCB has bought stock ETFs and the Swiss Central Bank has been buying stocks, with Apple being one of its top holdings. While skeptics of the effect central banks are having on the market can dodge the effects bond buying is having on stocks, there’s no question buying equities boosts valuations to artificially lofty levels.

The European Central Bank has been more aggressive than the Fed as it is buying corporate bonds instead of just treasuries and mortgage bonds. As you can see from the chart on the left, ECB QE has led to an influx of negative yielding bonds.

In the chart on the right, it shows that ECB corporate bond purchases have caused high yield bonds to offer lower yields than stocks. This manipulates the market place as it causes excess risk taking as the cost of capital is non-existent, creating artificially extended booms and busts in the business cycle – one doesn’t happen without the other. Think of how fiscally irresponsible you would be if you won the lottery. Low cost of capital encourages this poor behavior. The ECB now owns 13.4% of the 649 billion euro corporate bonds outstanding. That’s heavy manipulation.

The chart on the right furthers this point as the increases in the central banks’ purchases have probably led to credit spreads tightening. Credit spreads are the difference between treasuries and more risky bonds. For example, a strong economy would have a small difference between risky junk bonds and less risky treasury bonds, which are incorrectly perceived as safe haven risk free assets, because this good business environment and excess liquidity ensures pent up demand for financial assets means even the worst firms can do well and pay their bills. That would be an example of a tight (low) spread. When the economy goes sour, junk bonds start to default as investor expectations of risk increase, making their yields increase relative to the safer treasury bonds. That would be an example of a wide spread which has stressed financial conditions.

As you can see in the chart on the left, the size of the central bank asset purchases is expected to diminish in 2017. Eventually, the size of the balance sheets is expected to start decreasing in 2018. As you can see from the chart on the right, the credit spreads look like they will widen if the relationship is consistent with how it started in 2008 when these purchases began. 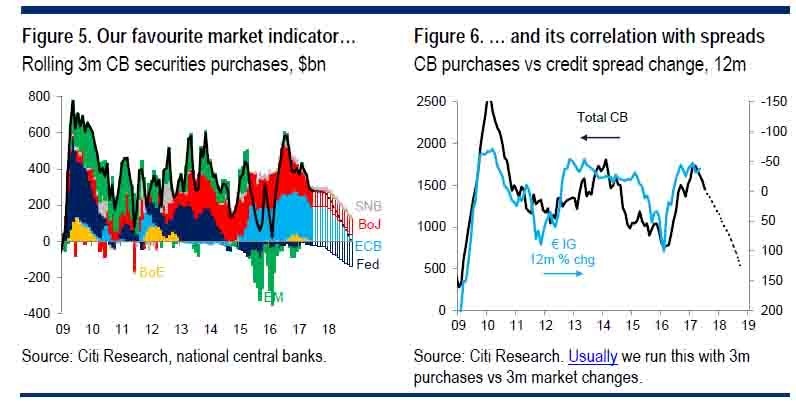 As you can see from the chart above, the Fed will be unwinding its balance sheet while the ECB and BOJ will be tapering their purchases. The ECB is scheduled to buy $60 billion in bonds per month until December. Afterwards, we don’t know what the ECB will do. In its June meeting, the ECB stated it hadn’t discussed tapering. That was either a response to the tepid inflation or because it’s too early to discuss policy 7 months in advance.

The charts below show Goldman Sachs’ estimates for when the Fed will unwind its balance sheet.

It’s easy to be skeptical of this policy because the chance of the economy avoiding a recession until 2020, especially with the Fed raising rates, is unlikely. As you can see from the chart below, the Fed is acting like the overly optimistic CBO. 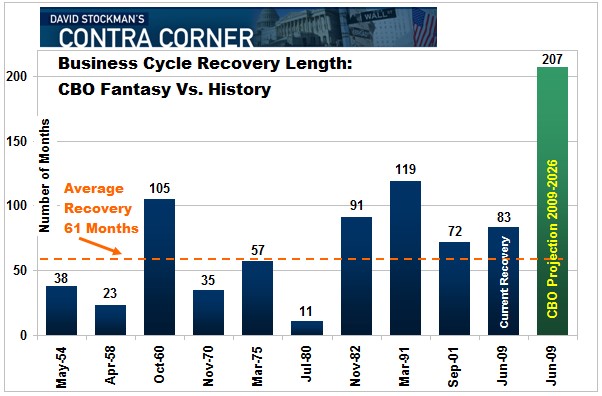 The CBO’s budget expects the economy to avoid a recession until at least 2026. That would be almost twice the record length of a recession-free period. By the middle of 2020, the recovery will be 107 months old which would be the 2nd longest recovery since at least 1964.

The Fed’s unwind policy is unprecedented, so it’s tough to predict what will happen. The chart below shows the most recent unwind as the ECB shrunk its balance sheet from about $3 trillion to $2 trillion. This is different from what the Fed will do because the slack was taken up in 2013 by other central banks, but in 2018, the slack won’t be taken up.

Comparing the Fed’s 2017-2020 unwind to the ECB’s June 2012 to August 2014 unwind is not a great way of predicting what will happen because the ECB bought different assets. It’s also worth noting that the ECB quickly gave up on stabilizing its balance sheet and bought more bonds than ever. The ECB’s balance sheet is currently the largest in the world.

The increase in central banks’ balance sheets has caused unknown distortions in the marketplace. We will see how the economy and risk assets can stand on their own two feet in 2018 when the collective balance sheets start to shrink as the Federal Reserve suggests it may start doing so. Many skeptics believe this won’t happen because the market is addicted to central banks purchasing assets. Violent moves in assets could be coming in the next 12 months.