Stock Valuations Are In The 99th Percentile 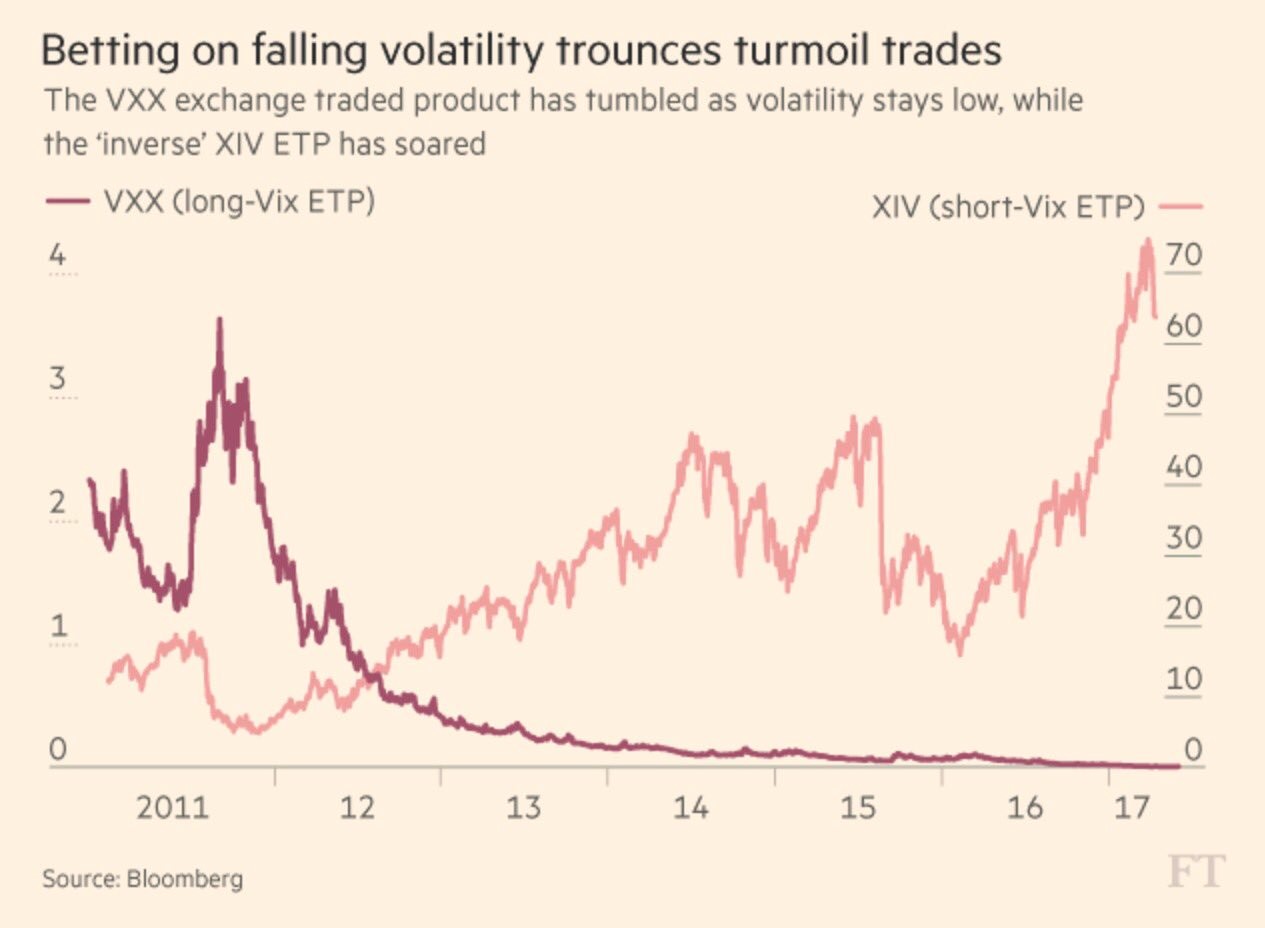 Focusing on every economic data point with a magnifying glass can lead you in the wrong direction. Therefore, it’s best to take a step back and analyze the situation from afar before getting ‘into the weeds.’ It’s especially important in the current environment because the economy has been consistently weak. It can lull you into thinking economic deceleration and stock market appreciation is a rational combination when it isn’t.

One way to look at the economy from afar while gaining a great deal of detail at the same time is reviewing the Citi U.S. economic surprise index. 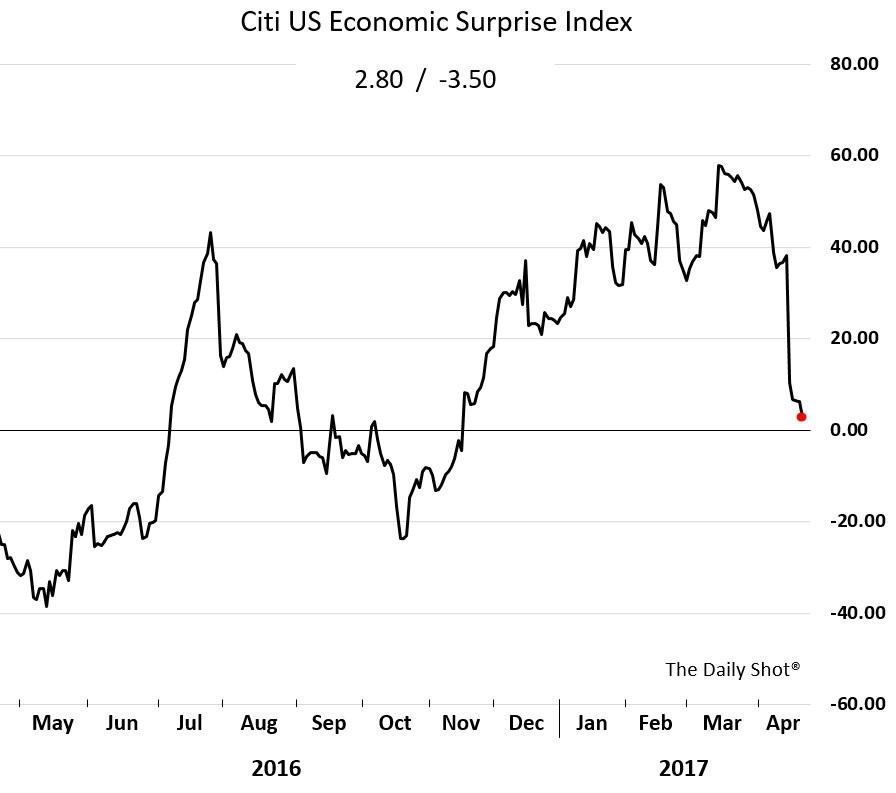 It looks at the expectations of economic reports compared to the actual results. This type of analysis is critical to investors because markets usually change based off changes to expectations.

The reason the economic surprise index did well after the election of President Trump was because businesses and consumers became more optimistic about fiscal stimulus. This optimism has decelerated because of inaction on the policy front as the American Health Care Act failed to even get a vote in the House of Representatives earlier in the year. One example of a data point which missed expectations was the Philly Fed Manufacturing Business Outlook survey. The index came in at 22.0 which missed expectations for 25.0.

As was previously mentioned, economic growth reports haven’t mattered to stock prices lately. The recognition of this trend is the step back you must take before you analyze the economy. This bull cycle has been a scenario where you could have the economic data ahead of time and still not have insight into where stocks or junk bonds are going.

The chart below provides evidence of how stocks have rallied without a similar sized expansion in profits and sales. 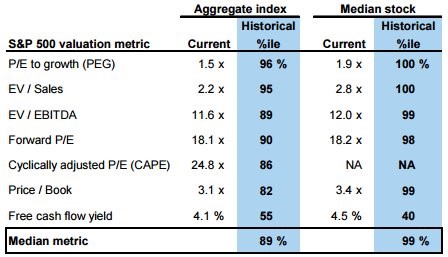 The median metric of valuations of the median stock is in the 99th percentile. Low interest rates have been the driver of this multiple expansion.

The reason why this situation in stocks is especially disconcerting is because it’s a self-reinforcing phenomenon. An analogy to this situation is rewarding a child for bad behavior. The child may have a sweat tooth which causes him to be overweight, but if the parent decides to reward him when he overeats, the results can be catastrophic.

Investors buying stocks at expensive valuations is a bad behavior which is being rewarded with profits. This exuberance is evidenced by the chart below.

Stocks rallied after President Trump was elected. Investors based their hope on the positivity expressed by businesses. Businesses became optimistic because of the promises that regulations would be cut, infrastructure stimulus would be enacted, and healthcare reform would pass. This agenda has gotten off to a rocky start as the healthcare plan supported by Paul Ryan was rejected by the House Freedom Caucus which is a group of fiscally conservative members.

There is new found optimism about the latest plan which stems from the fact that it was negotiated by House Freedom Caucus Chairman Mark Meadows and the Tuesday Group co-chairperson Tom MacArthur. The Tuesday Group is made up of moderate house members. The plan they negotiated is called the MacArthur Amendment to the American Healthcare Act.

This new plan moves in the direction of conservatives which makes sense because they were the holdouts of the last plan. When this plan is about to be voted on, journalists will be counting which moderates oppose it. There are reports that 18-20 new House Freedom Caucus members will support this bill after opposing the original one.

The plan comes down to the same question which has been plaguing politicians for years. The question is how to cover patients with pre-existing conditions while lowering costs for everyone. There is no answer to this question which will satisfy both progressives and conservatives. The voters have set up Congress with a nearly impossible task. They don’t like Obamacare, but they want to keep the part covering patients with pre-existing conditions. The reason this doesn’t work is because it’s not profitable to cover high risk patients.

The way the MacArthur Amendment solves this problem is by having a limited waiver option for states which allows insurance companies to raise the prices of coverage for those with pre-exiting conditions if there is a high-risk pool set up by the state or if the state enters a federal high-risk pool. Pooling risk lowers costs. However, the moderates will hear criticism from progressives about how this will hurt those with pre-existing conditions because the risk pools are underfunded. The Center for American Progress claims this new plan will raise premiums by $4,000 for those with asthma and $71,000 for those with sever cancer.

The healthcare plan is the defining moment of Trump’s presidency because it precedes the tax reform and infrastructure spending plans. It’s a remake of the Obama presidency except on the opposite side of the aisle. If a plan is passed, stocks may rally like they did this week on rumors that one was in the making.

The stock market is less than 2% off its all-time high despite the Citi Economic Surprise index showing weak results being reported lately. This evidence along with the fact that stock valuations are in the 99th percentile show that stocks have been ignoring reality. One issue they have been paying close attention to is healthcare reform because President Trump stated it must come before tax reform. While bad news in the past 8 years has more or less been ignored with respect to market valuations, the importance of this healthcare bill are as great as ever, and could potentially alter market valuations significantly depending on if the bill is passed or not.