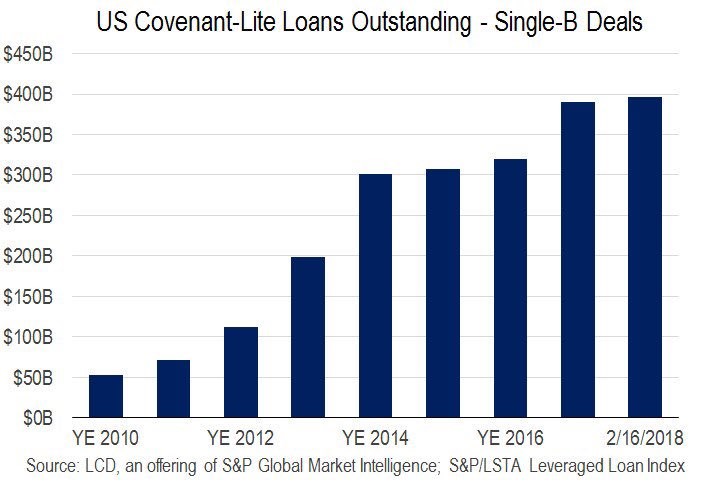 There has been a huge increase in corporate debt to record levels, but the cost to service the debt is manageable because interest rates are low and investors are extremely sanguine. As you can see from the chart below, the spread between junk bonds and investment grade bonds is the lowest of this business cycle. This means that the additional risk taken out by investors buying junk bonds is being rewarded with historically little premium. 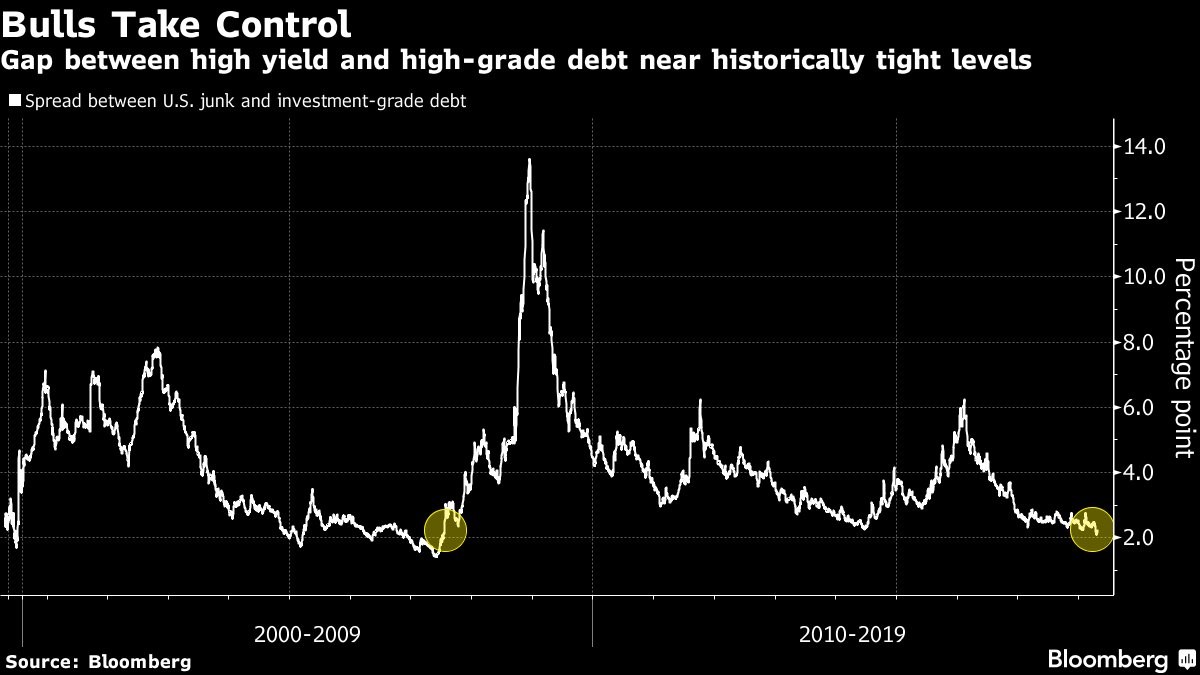 Investors are in a ‘risk on’ mode. It’s easy to say that junk bonds are probably a poor bet versus investment grade bonds on a risk adjusted basis, but there can still be extremely speculative money made in junk if this cycle continues unabated (not for beginners). The spread was tight in early 2017, yet nothing has happened since then to widen it. If the spread were to widen, firms with junk debt would face the wrath of higher borrowing costs causing some of them to go under.

Leveraged Firms Will Be Squeezed In A Stress Period

Bankruptcy risk isn’t the only risk faced by increasing rates. Firms which take out investment grade debt are highly unlikely to go bankrupt, but higher interest rates make the excess leverage taken out look like a mistake. The debt rate is locked in after its issued, but when it’s rolled over, it can be painfully expensive to pay the new higher rates. The pain will be widespread when this occurs because debt is so excessive. It will be tougher to make M&A deals, pay dividends, buyback stock, invest in capex and in new initiatives. The best time to make M&A deals and buyback stock is when asset prices are cheap during stress periods, so foregoing that ability is a big opportunity cost. It’s difficult to finance deals in moments of panic which is why having a big horde of cash is advantageous.

When evaluating leverage, there are both positives and negatives. Taking out debt has increased returns for years, but it will be a problem during the next recession. It’s very difficult for firms to time cycles as they are mainly adept at running their businesses, not timing the cycle. This isn’t an excuse for malinvestment at inopportune cyclical moments, but it is a sad reality. There will be firms which take advantage of the stress periods, but in aggregate, there will be pain. To be clear, we aren’t expressing a negative view on the near term economy, but it’s fair to review the potential risk factors in the corporate debt market when the economy is healthy; it’s good to issue reminders about the potential positives when the economy is in a recession. It’s up to you as the investor to take those signposts and use them to accurately time the market. An article for general consumption will never be able to tell you the correct decision for your portfolio. The purpose of the discussion is to allow you to see various perspectives and to give you the tools to evaluate for yourself.

As we mentioned, the leverage ratio of corporations is high, but there’s no near term issue because financing costs are low. Unsurprisingly, this debt has led to corporations being downgraded. As the chart below shows, the S&P Global median corporate credit rating has fallen from A to BBB-. 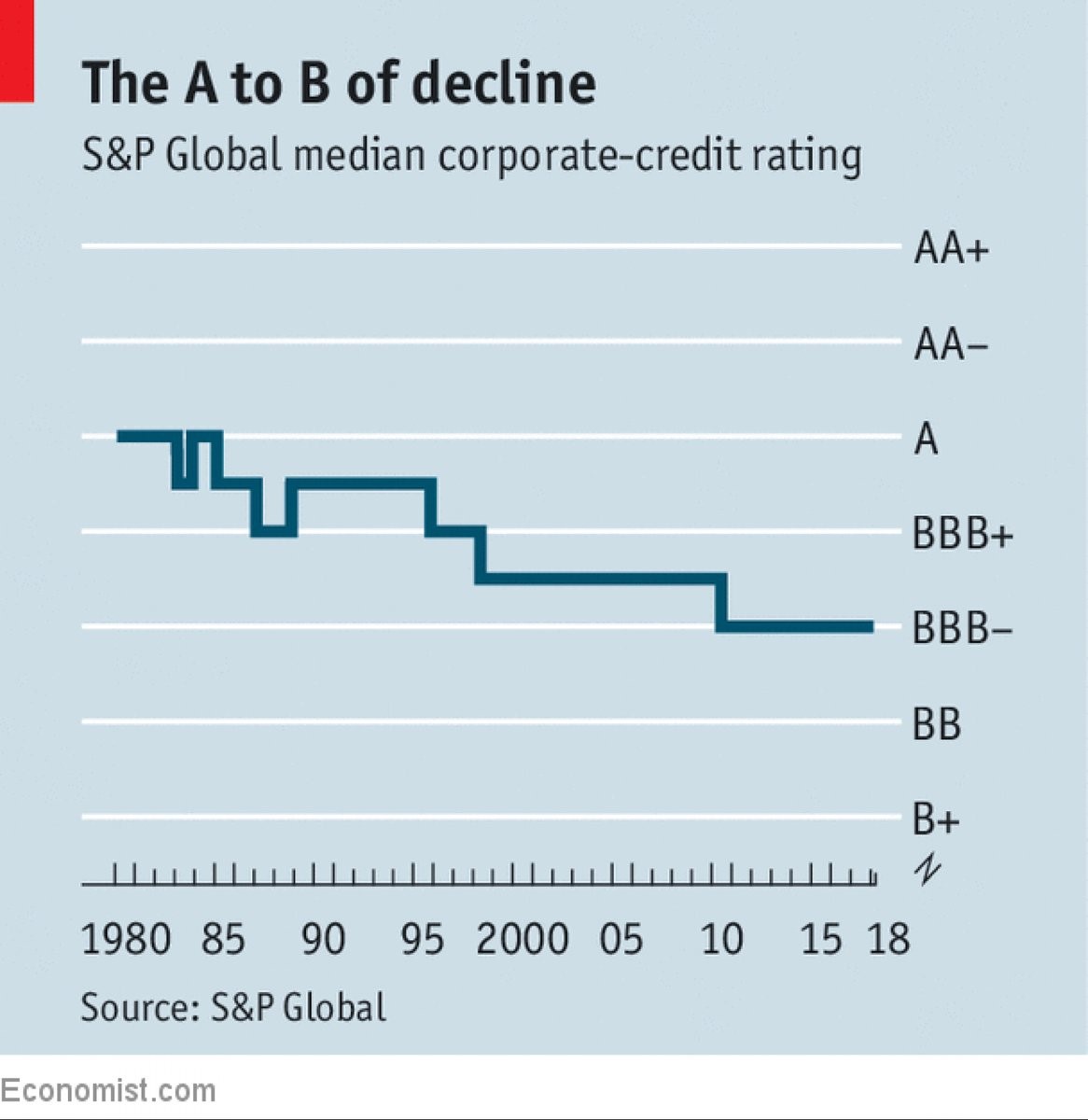 Credit ratings are a great signpost which tell us the risk of default. They certainly showed their inadequacies in the 2008 financial crisis. However, they are valuable in general as investment grade bonds very rarely default. That’s not to say firms with investment grade bonds don’t default on their loans eventually. They just get downgraded before it happens. Bankruptcy risk creeps up slowly and then increases quickly once there is stress. These stress periods are created when a structural issue in the business model transforms to a financing problem. The issue is when a firm is doing well everyone wants to loan it money and when it’s doing poorly, no one does unless the yields are extremely high to compensate for the risk of default.

Where The BBB- Is Coming From

It’s valuable to see the reasoning behind the downgrades to explain the situation. In the chart below, the bars on the top show the firms which were added to the BBB- category and the bars on the bottom show firms leaving BBB-. 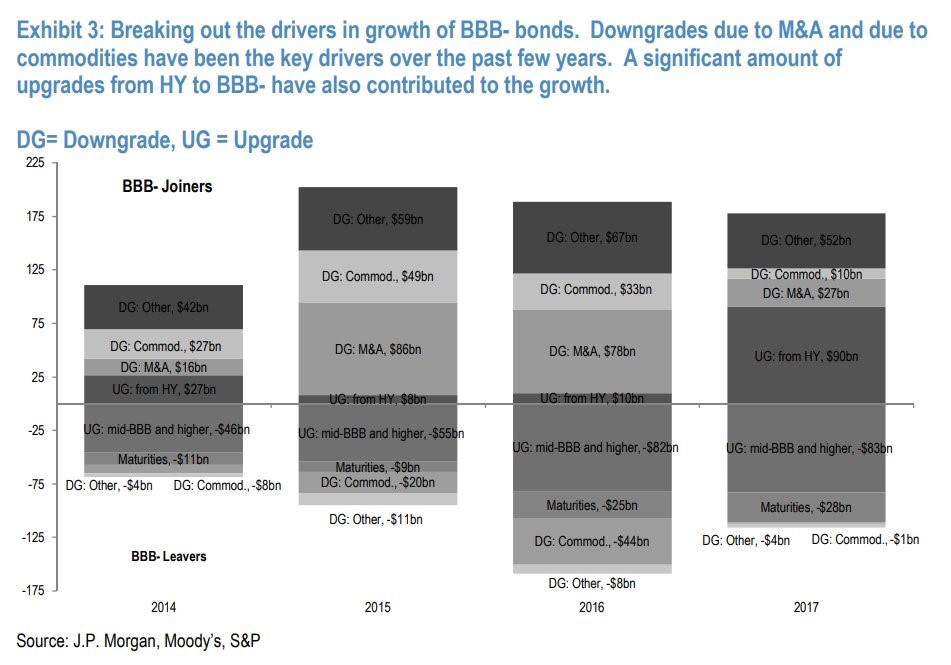 The joining category is bigger in each year as the rating has become more popular. There have been big downgrades because of M&A especially in 2015 and 2016. Big deals like this can be risky as synergies are often over-exaggerated. The good news is there wasn’t a recession right after those big deals were done.

Commodities related downgrades also were popular in 2015 and 2016. Commodities prices improved in 2017, so there was less of an issue that year. Those downgrades will likely occur even less in 2018 as commodities have increased this year as well. 2017 is the best year on this list because there were $90 billion in high yield upgrades which were added to the BBB- category and $83 billion in upgrades which left the BBB- category. The situation could be similar in 2018 because of the tight spreads, but some firms may be downgraded because it will be a big year for M&A activity.

The biggest risk to the corporate debt market is covenant lite loans because they are being issued on a massive scale unlike ever seen before. The default rates weren’t excessive in the last recession, but the percentage of loans was small. As you can see from the chart below, the single B rated covenant lite loans outstanding were only about $50 billion in 2010 and now they are about $400 billion. Cov-lite loans were about 15% of the leveraged loan market in 2008 and now they are 77% of the market.

We explained the potential repercussions of the corporate debt level being so high. The situation never looks bad when the economy is doing well, default rates are low, and spreads are tight. Once a recession hits, the situation will reverse itself as we will see the ramifications of all this debt and the covenant lite loans. The amount of BBB- loans could contract in 2018 as the situation is placid, but we’ll see a reversal in the stress period of this cycle which could come as early as the next 2 years as we have discussed previously in Timing The Next Recession.