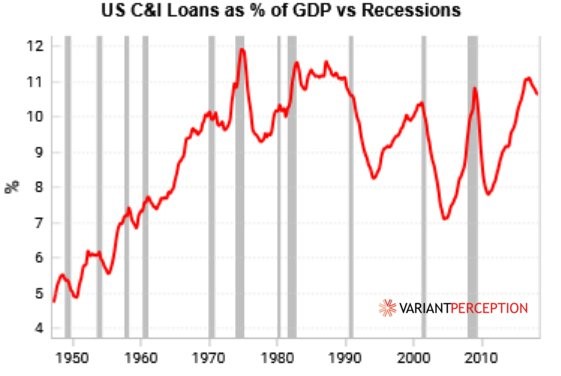 Macroeconomic analysis is not about finding indicators and mindlessly listening to them. The game is difficult because the world is always changing. There might be a reason to discount (attribute less importance on) an indicator even after it has had a great track record of forecasting results. The better the indicator’s track record, the better the argument needed to dethrone it. As you can see, macroeconomic forecasting used for investing is all about analyzing the strength of arguments just like investing in individual companies. The best mindset to analyze situations correctly is to avoid bias. If you hear a really great argument, don’t ignore it because it can save you a lot of money. Saving money and avoiding being wrong are just as, if not more, important as finding winners and being right.

Commercial and industrial lending growth is weak which is a sign the economy is headed for a recession. Banks lending to businesses is the life blood of the economy. This is why when the Fed raises rates, which slows down lending, recessions soon follow. We’ve looked at the C&I lending growth on a year over year basis. On that basis, a decline is considered a recessionary indicator. It almost flashed a warning sign in November 2017, but growth rebounded. With the current growth rate in the low single digits, a yellow warning flag is being waived.

The chart below is a more dynamic way of reviewing the C&I loan growth. It compares the C&I loans as a percentage of GDP.

In the past couple years the percentage has fallen. This indicates a recession should already be underway or one is coming shortly. Considering the fact that the economy is not near a recession according to various metrics such as the leading indicators, GDP, and labor market data, this indicator needs to be reviewed further. It has been wrong, and has suggested the same story for over a year now without a recession ensuing. 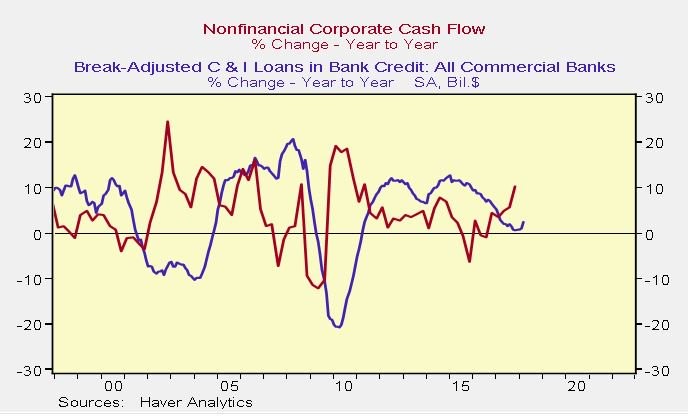 The recent increase in cash flow has led to lending weakness. Generally, at the end of business cycles profit growth isn’t this strong, but firms have the benefit of the tax cut. While you can imagine a situation where a firm borrows money as profits go up, it’s unlikely for a firm which just got a windfall of cash from a capital repatriation and a lower tax rate to need to borrow money. Loan growth is low, but it’s clearly not a problem.

The chart below shows the situation from a different angle. It compares the seasonally adjusted annual run rate of the non-financial business financing gap with the period to period change in the break-adjusted C&I loans in bank credit. These two metrics are highly correlated. 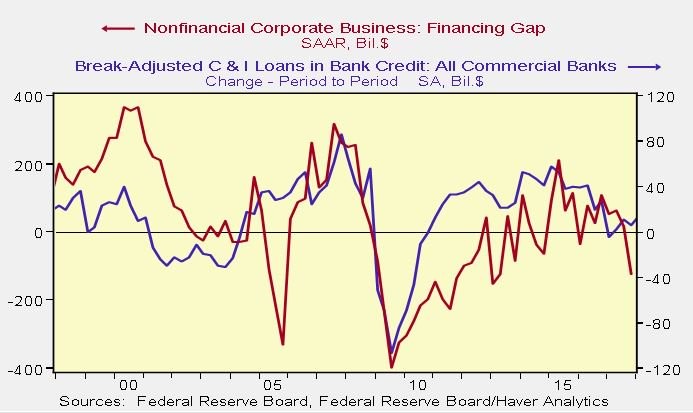 When a firm has a financing gap, it borrows more money. When it doesn’t have a gap or the gap is negative because there’s a surplus of capital, firms don’t need to borrow much. The financing gap has fallen as cash flow and profits have risen which explains the weak C&I loan growth data. It’s fair to say that any weakness in C&I loans shouldn’t shock you into thinking a recession is coming in 2018.

Heading into the tax cut implementation, there were critics who claimed the tax cut wouldn’t boost growth because the money would go to funding buybacks. Some even retaliated by proposing to ban buybacks. Clearly, that’s a ridiculous notion because firms can do whatever they want with their capital in a free market. There are fair concerns about executive compensation, but returning capital to shareholders is literally giving them their own money back, so it’s far from an unscrupulous act.

The initial claim that the money would go to buybacks which would be bad for growth is wrong for two reasons. The first is that after the firms give the money back to shareholders, if the shareholder sells their shares, they can then invest that money in new businesses. Either the initial firm invests in its own business through capex or shareholders use the cash to invest in whatever they see fit. There’s nothing about buybacks that would be bad for growth. There’s no question that the capital will stay in the hands of those who are successful, but that’s what happens when taxes are cut; it’s not a specific issue with buybacks.

The second reason why the claim was wrong is because money is being invested in capex. As you can see from the chart below, the S&P 500’s capex growth was up 19.4% from Q1 2017. 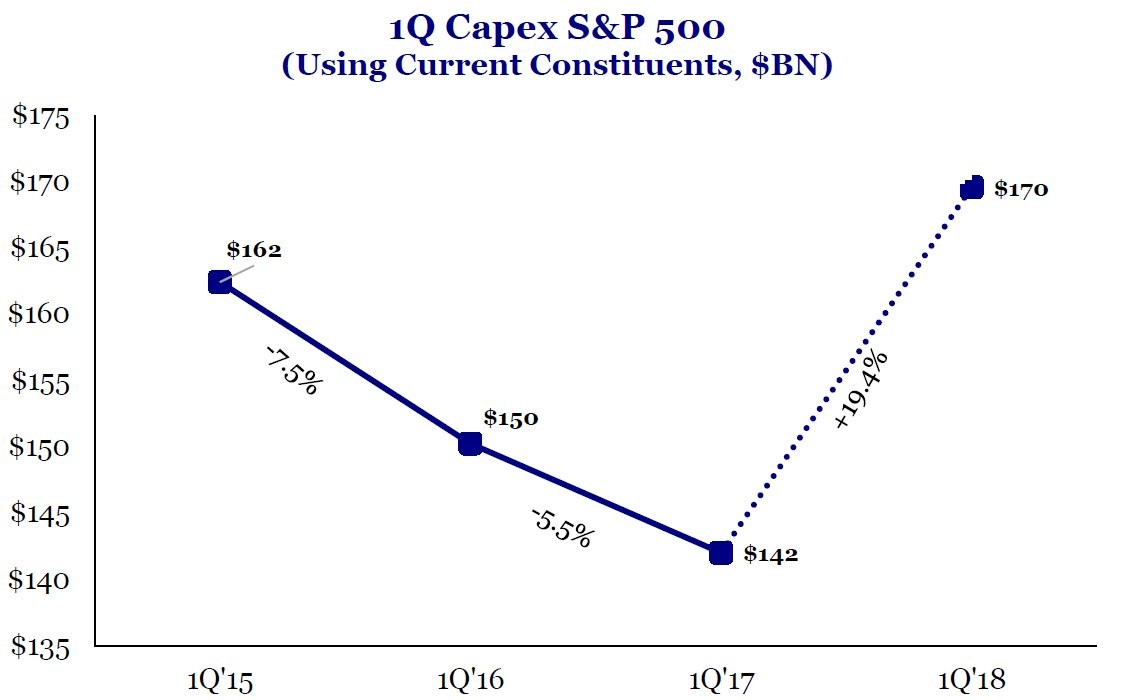 Capex fell from Q1 2016 to Q1 2017 even though profits grew. When firms invest in capex, it can be considered a good sign for the economy because it means they see opportunities to grow their businesses. Opportunities flow in good economies. This economy has had trouble growing private fixed investment, so increased capex will help the situation which will hopefully improve productivity growth. A counter argument to capex being beneficial is if the economy experiences a recession in the short-term, which could make the capex investments ill-timed.

We busted myths which claim C&I lending growth is signaling a recession, buybacks are bad for the economy, and that the tax cut wouldn’t boost capex. These are all bullish conclusions as the tax cut putting more money in the private sector is a good thing. We’ll be looking to see if the U.S. economy outperforms the other advanced economies due to this stimulative policy. The amazing 2017 run in stocks was pricing in this policy. Therefore, stocks won’t necessarily explode higher. However, a recession also isn’t imminent.